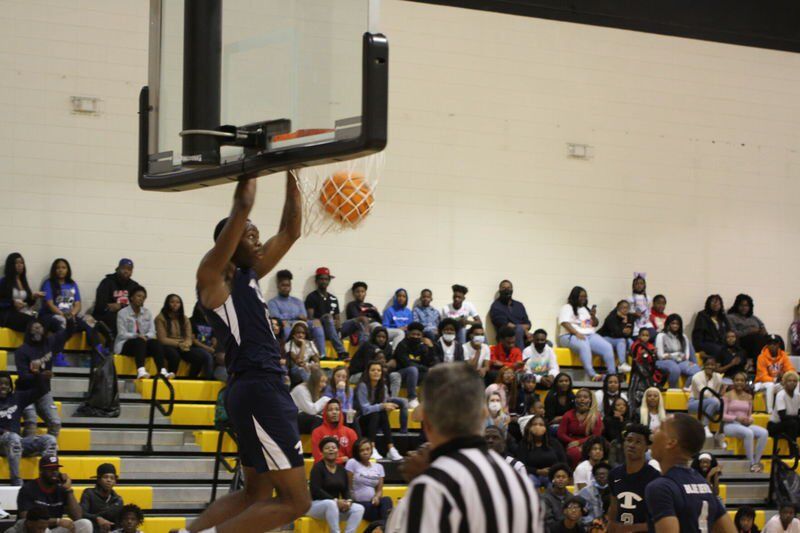 Becky Taylor | The Tifton GazetteJatarion Warren slams home two of his 15 points during the first period of Tift's game against Cook. 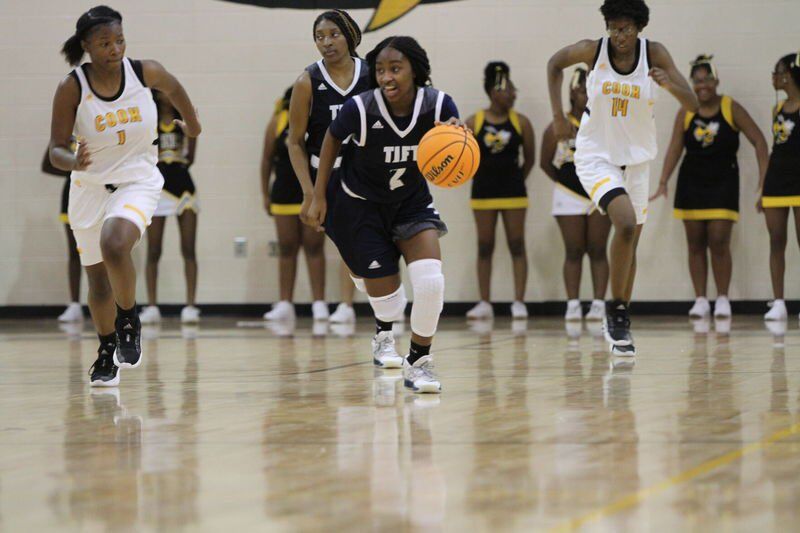 Becky Taylor | The Tifton GazetteO'ashia Cushion (2) starts a Tift County fast break in the second half of Wednesday's game. Cushion scored 10 points to the game and assisted numerous teammates.

Becky Taylor | The Tifton GazetteJatarion Warren slams home two of his 15 points during the first period of Tift's game against Cook.

Becky Taylor | The Tifton GazetteO'ashia Cushion (2) starts a Tift County fast break in the second half of Wednesday's game. Cushion scored 10 points to the game and assisted numerous teammates.

ADEL –– For the first time in the 2020-21 season, the Tift County Blue Devils and Lady Devils played the same opponent on the same night. Both will be eager to repeat the experience as Tift swept Cook Wednesday, the Lady Devils winning 59-17 and the Devils earning a 56-31 victory.

It was the third game in as many nights for Tift's teams. The boys played two nail-biters in Leesburg earlier in the week and the girls had two relatively easy wins at Warner Robins.

Shakiria Chaney scored 17 for Tift Wednesday, the same amount the Lady Hornets scored as a team. Chaney was used sparingly in the second half, with head coach Julie Conner opting to mix and match her lineups.

Cook did lead in the game, one that lasted all of six seconds. Asia Johnson hit a three-pointer with 34 seconds remaining in the first half that gave her squad a 12-11 advantage.

Tift hustled the ball down the floor and O'ashia Cushion was fouled on a made drive to the basket with 26 seconds to go. The free throw missed, but nothing else stopped the incoming onslaught. By the end of the period, the Lady Devils were ahead 17-12. Very little else went right for Cook after.

The Lady Hornets did not score at all in the second quarter and went nine minutes total between points. During that stretch, Tift outscored them 23-0. Chaney had 13 points to Cook's 12 at the half. Cushion was nearly her equal at 10.

The second quarter began with Skye McCrae blowing by the defense for a layup. Tift fed Chaney under the basket and twice in the game she scored directly from inbounds passes into the paint.

McCrae made a three-pointer for a 15-point lead and JaKembre Beckhom made it 20 (32-12) by making a pair of free throws with 26 seconds left.

Cali Conner assisted Chaney to open the second half before Cook broke their silence with a basket by De'Kyra Hall. Soon, Tift was deep into its bench. Seven players scored for the Lady Devils in the third.

Faith Hillmon's free shot made for a 46-16 lead and the game climbed beyond mercy rule territory as Conner hit two free throws before assisting Hillmon under the basket. The quarter ended with Tift ahead, 51-16.

There was less scoring in the fourth frame, with the clock limited to six minutes. Caitlyn Burgess scored Tift's last points on an assist from Cushion.

Chaney equalled Cook in points. Cushion finished with 10 and Conner scored nine. Over the last 22:30, the Lady Devils outscored Cook, 48-5.

Johnson had five points for the Lady Hornets, all in the first quarter. Hall and Na'Jyah Thomas had four points each.

The Hornets hung around a little longer with Tift, who showed the effects of playing two nail-biters over the last two nights.

Cook jumped out to a 5-1 lead in the first minute, courtesy of a steal and dunk by Jordan McMillian and a three-pointer by William Powell.

Tift got back on track with a Hezekiah Jackson bucket and a shot from behind the arc by Jatarion Warren. Jyamier Beckhom's three made it 9-6 and while McMillian tied it, 9-9, the tide was turning.

Wendell McClain was fouled on a made basket with 48 seconds to go in the first and he added a free throw. Warren skied above the rim for a dunk before hitting another three with five seconds remaining. It was now 17-9 and soon to get worse.

Cook briefly kept pace on the scoreboard with free throws, but couldn't keep pace with Warren. He was fouled driving the baseline for two quick points. Deyonte Dean cleaned up the glass for two more and Tift fired off an 8-0 run.

The run had a highlight of Beckhom boxing out so well on the offensive glass during a missed free throw that he scored a layup. Wendell McClain had another with a steal that turned into another layup.

Cook only had one basket in the second, a McMillian three with 20 seconds to go. That left enough time for the Devils score not just once, but twice.

Parker scored on an offensive rebound with six seconds to go. Tift pressured the Hornets into a turnover in the backcourt. The buzzer for the half sounded, but the officials agreed one second remained. A toss to Parker in the lane saw him in motion leap and neatly toss the ball into the net.

Tift could not quite get to mercy rule territory, but were up 22 points, 46-24, through three quarters.

Parker continued his prowess in the quarter, scoring six straight points by himself at one point. Cook got two baskets from Alex Chery.

The Blue Devils' lead peaked at 28 points in the fourth when Tyquan Mills converted a steal with 2:02 left.