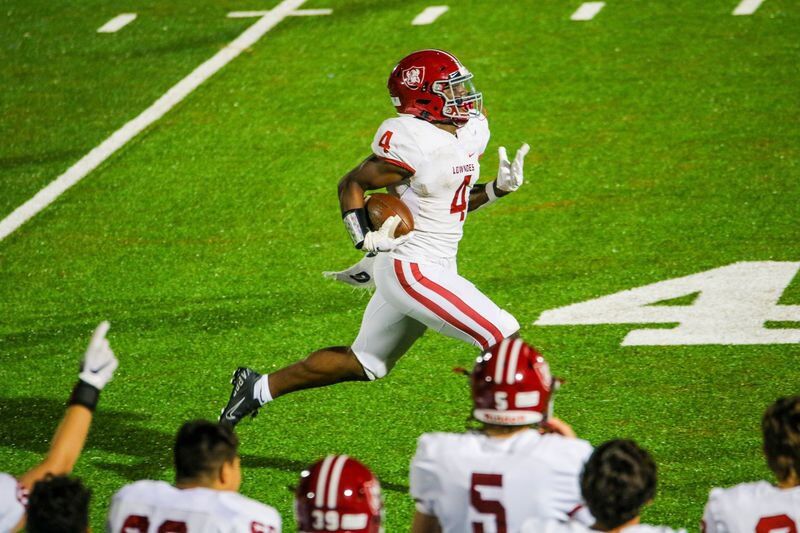 Larry Godwin | The Viking NationLowndes running back Chase Belcher (4) breaks free for a 70-yard touchdown during the third quarter a region game against Camden Friday in Kingsland. 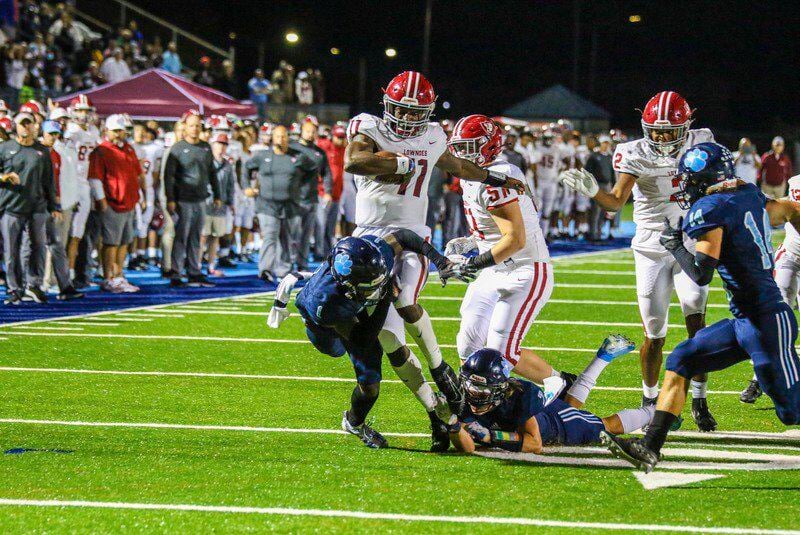 Larry Godwin | The Viking NationLowndes quarterback Jacurri Brown (11) runs over a Camden defender during a region game Friday in Kingsland. Brown completed 8 of 15 passes for 224 yards and two touchdowns. He also had 15 carries for 109 yards and a touchdown in the Vikings’ 35-29 win.

Larry Godwin | The Viking NationLowndes running back Chase Belcher (4) breaks free for a 70-yard touchdown during the third quarter a region game against Camden Friday in Kingsland.

Larry Godwin | The Viking NationLowndes quarterback Jacurri Brown (11) runs over a Camden defender during a region game Friday in Kingsland. Brown completed 8 of 15 passes for 224 yards and two touchdowns. He also had 15 carries for 109 yards and a touchdown in the Vikings’ 35-29 win.

The Vikings answered a quiet first half with a second half that ended in fireworks as the two teams traded touchdown blows inside the final minute.

The Wildcats’ final drive was over 5 minutes long and took all but 51 seconds on the clock. But Brown and the Vikings’ offense only needed one play to go nearly the length of the field and win the game.

The Vikings got the ball back inside their own 15-yard line with a little more than 45 seconds left. The first couple of plays got the Vikings up to the 22, but it took them most of the remaining clock to do it.

With about 20 seconds left, Brown rolled out to his right looking for someone to break loose from the Wildcats’ secondary, and who else but senior running back Chase Belcher.

“We’ve got a lot of great players on this team,” Vikings head coach Jamey DuBose said after the game. “But I wish somebody could show me two better players in the state of Georgia than 11 [Brown] and 4 [Belcher].”

Brown uncorked a perfect spiral to Belcher who was streaking past Wildcats defensive backs to his left and right. As the former receiver ran under Brown’s ball, he created more separation, caught it cleanly and hit pay dirt untouched with 13 seconds remaining to take the final lead of the game, 35-29.

The fourth quarter was full of big plays, but the Wildcats were out of gas, and the only big play left was a game sealing interception by Cooper Melvin as the clock expired.

The Wildcats’ fourth quarter touchdown just a few seconds earlier had, at the time, felt pretty final. The Wildcats scored from two yards out after converting a big third and seven and then lined up to take the potential game-tying extra point kick.

But Wildcats head coach Jeff Herron called a timeout and sent the offense back on the field. Senior running back Jamie Felix took the ensuing handoff around the left end and let his blocker clean up the only Viking defender in the area to take a 29-28 lead into the final seconds of the game.

It was no doubt a gutsy call, going for two with the game on the line always is, but other than a couple big plays in the second half, the Vikings had struggled to get much going.

“They [Brown and Belcher] keep finding ways to come up big for us and win football games. They do so much for us, they’ve really done a lot,” DuBose said. “I should single the whole group out, but you know I’m just proud of ‘em.”

For the second straight week the two seniors have provided the bulk of the Viking’s offensive production. Most of Brown’s 224 passing yards on the day came from a pair of 70-plus yard touchdown passes, both to Belcher in the second half.

Between Belcher’s 78 yards on the ground and Brown’s 109, the two accounted for 187 of the Vikings’ 213 total rushing yards, and all but one of the rushing touchdowns. Sophomore back Jacarre’ Fleming scored in the first quarter.

While 148 of Belcher’s 151 receiving yards came on just two plays, the next closest Viking in terms of receiving yards was Kris Thomas, who caught two balls for 46 yards.

In last week’s game against Colquitt, Brown and Belcher accounted for 393 of the 449 total yards for the Vikings, as well as six of their seven touchdowns.

The Vikings’ defense came up big in the fourth quarter with a pair of interceptions, but other than that they struggled to consistently contain the Wildcat’s wing-T offense.

The Wildcats ran for 235 yards on the day, as usual splitting carries between a few players. The main ball-carriers Friday were K.K. Albertie, who had 18 carries for 87 yards and touchdown, and Anthony Hasbrouck, who rushed nine times for 88 yards and a touchdown as well.

The real story of the game for the Wildcats was their success on third downs. The Wildcat’s 19 attempts on third down is already a huge amount, and they converted nearly half of them.

Their eight third-down conversions aided multiple long drives in the second half that used up huge chunks of the clock that the Vikings so desperately needed to come back.

All in all, the Wildcats used 8 of 19 third-down conversions, 2 of 4 on fourth down, to hold the ball for 32 minutes in the game. The Vikings held possession for about half that: 15 minutes and 44 seconds.

After the Wildcats took the opening second half kickoff to the house, the pressure was mounting on the Vikings to respond. So they did with a long, marching drive of their own, however it ended with quietly after the Vikings just missed a 30-yard field goal.

The Wildcats got the ball back and held it for nearly the entire remaining quarter, over nine minutes. But that drive too ended with a missed field goal, and the Vikings took back over with just a few seconds left in the third.

Here is where the star seniors for the Vikings connected on their first 70-yarder. Brown scrambled away from a broken play to pitch the ball up to Belcher who did the rest.

The third quarter clock read all zeros by the time Belcher crossed the plane to make it a one touchdown game going into the final frame.

Down 21-7 just moments before, an interception from Cooper Melvin set up another Belcher score early in the fourth to tie the game at 21.

The Vikings’ defense made a stop on a fourth and two around mid-field that set the offense up to take a 28-21 lead, courtesy a 47-yard scramble from Brown.

The Wildcats got the ball back with about four minutes left and used three of them to score and take the lead on a two-point conversion.

But the Vikings answered – going 78 yards in one play to win it. At the end of the day, DuBose is just happy to be “1-0 at midnight.”

“They had a good plan,” DuBose said. “They gave us a different front than we expected coming in; In the secondary they disguised some things. ... It wasn’t pretty, but it’s a win. We’re 3-0 in the region and we’re definitely region champs now.”

The Vikings secured the region title last week in a 52-31 win against Colquitt County but left no doubt by improving to 3-0 in region play and winning their last six games to end the regular season.

The Vikings have this week off, before opening GHSA playoffs at home against Region 3-7A’s Harrison Hoyas Nov. 12.