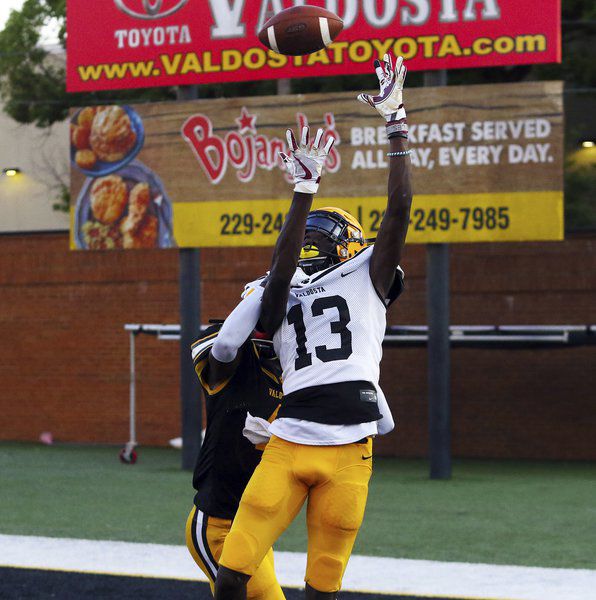 Valdosta wide receiver Javonte Sherman leaps for a pass during the second quarter of the team's spring game Friday at Bazemore-Hyder Stadium. 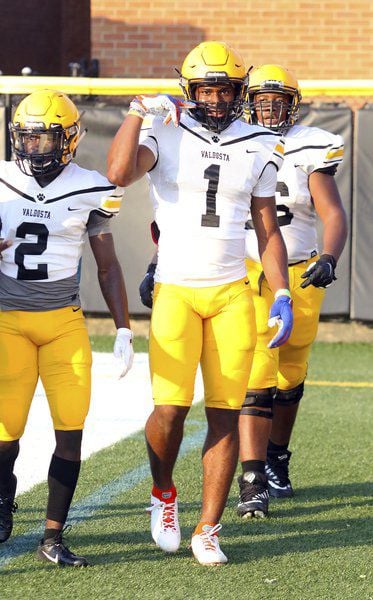 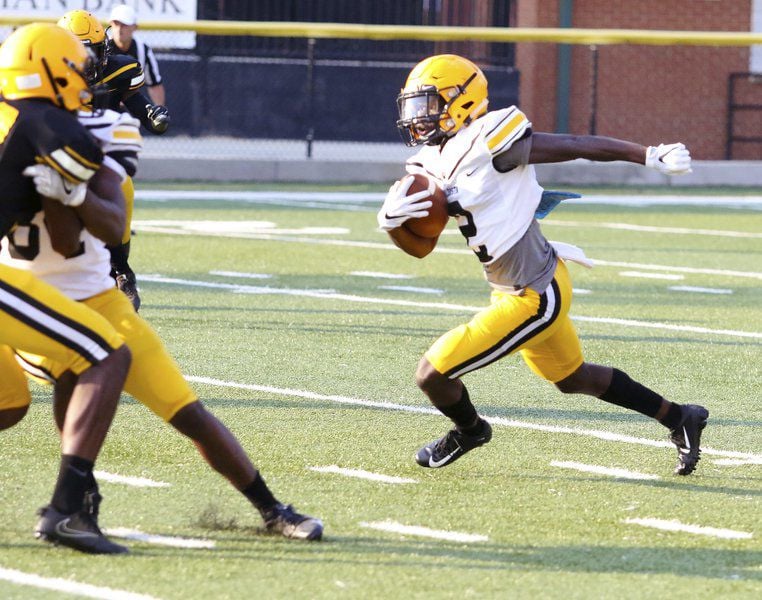 Valdosta wide receiver Tarrell Roberts runs after a catch during the first quarter of the team's spring game Friday at Bazemore-Hyder Stadium. 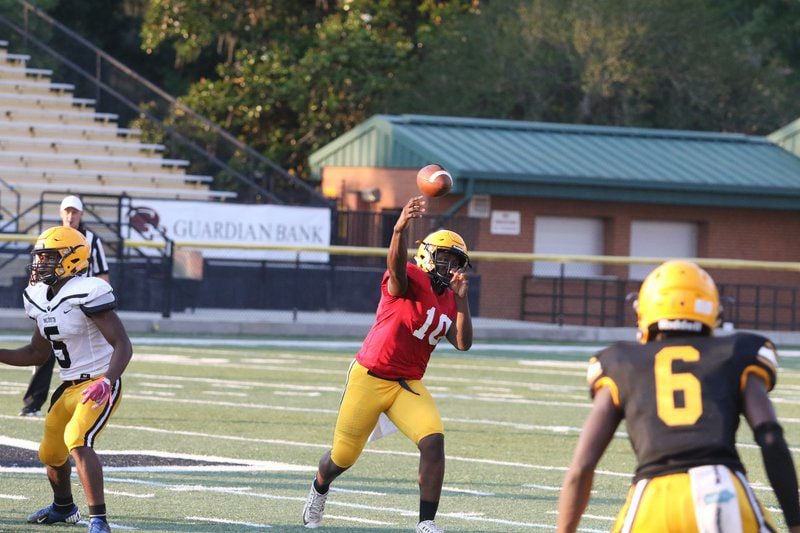 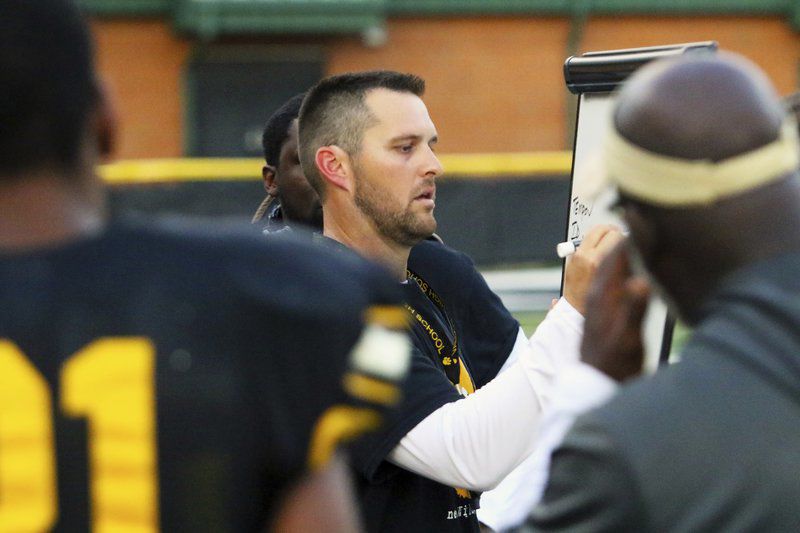 Valdosta defensive coordinator Justin Montgomery draws up a play on the whiteboard during halftime of the team's spring game Friday at Bazemore-Hyder Stadium. 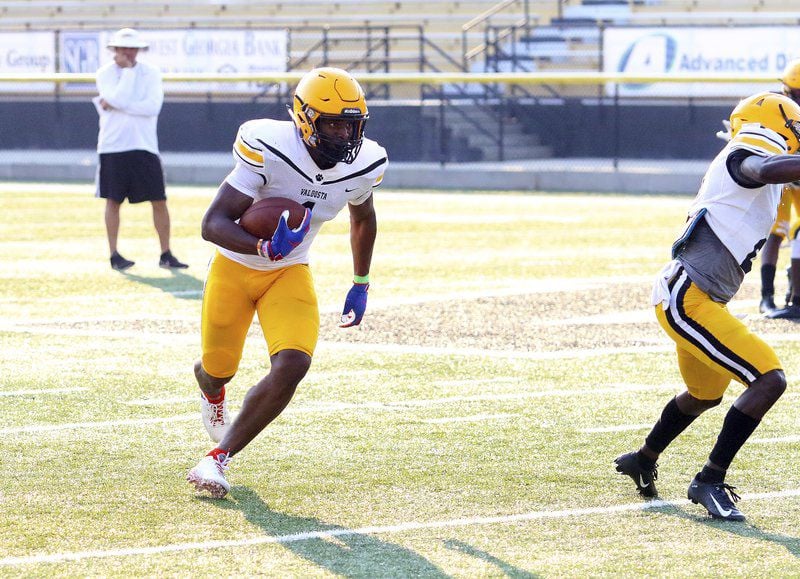 Valdosta wide receiver Jaheim Bell runs after a catch during the first quarter of the team's spring game Friday at Bazemore-Hyder Stadium.

VALDOSTA — The Valdosta Wildcats wrapped up their spring schedule with their annual spring game Friday night.

The Black squad defeated the White squad 21-17 as the first, second and third-team units got quality live reps against each other under the Friday night lights.

Florida commit Jaheim Bell scored two touchdowns — one breaking for 35 yards — and made a highlight-reel grab near the sideline during the game. Bell, who had missed much of spring practice with a hand injury, didn't look the least bit rusty as he shuttled between wide receiver, tight end and running back in the game.

"Jaheim was fresh," Valdosta head coach Alan Rodemaker said grinning. "He's been injured the whole spring. But him and Tarrell Roberts, what can you say about them? They're our big weapons and we've got some other guys around them."

Bell wore Florida Gators custom cleats, gloves and a headband during the game and broke out the signature Gator Chomp after his first touchdown of the game.

"Throughout the week, I had a hand injury and I just tried to get mental reps every day I could," Bell said. "I just looked at it as a positive thing and I didn't try to take any negative things from it. I came and practiced Thursday, did the walkthrough — my hand felt pretty good and I went to the doctor Thursday morning and he told me I was cleared to play. At the end of the day, I just performed and did what I know how to do."

Roberts caught a pair of touchdowns as well, one coming from sophomore backup quarterback Mike Miller on an 80-yard connection in the first half.

In addition to Bell and Roberts, junior wide receiver Javonte Sherman impressed with several long runs. Sherman scored the first touchdown of the game for the 'Cats on a 55-yard pass from Miller with 9:14 remaining in the first quarter.

Sherman caught a pass from Tate Rodemaker and broke a 50-yard gain with 8:55 left in the second quarter and had another connection with Miller for 18 yards in the second half.

Coach Rodemaker came away impressed with his offense, despite an interception each from Tate and Miller in the game.

"Really, for the first time this spring, the offense came out and executed well — some in the run game, mostly in the pass game but I was happy with our offense tonight; I really was," Rodemaker said. "We sputtered with our backups a little bit but I tell you this, Mike Miller played better tonight as our backup quarterback than he's played all spring. Mike's made some strides this spring and I think the (second unit) did as well. ... The second half, the defense controlled the game. Other than a couple turnovers, the offense did well tonight."

Offensively, the 'Cats tinkered with several different looks and formations — using Roberts, Terrell Denson and Bell at running back and out wide as receivers.

While the offense wasn't completely flawless, namely not being able to produce on the ground, Rodemaker praised the offensive line for its protections throughout.

According to Rodemaker, having so many different iterations without swapping out their starters creates a difficult puzzle to solve for opposing defenses — a credit Rodemaker gives to offensive coordinator Josh Crawford.

Defensively, the 'Cats performed well despite allowing 38 points to the offense. In all, the defense picked off the offense twice and forced a safety in the game.

Building on a lackluster season on that side of the ball into the spring, the 'Cats played with confidence and made it hard for the offense to do much in the running game.

"I thought they gave up a couple of big plays early, but other than that, they played well," Rodemaker said of his defense. "Like I said, it's tough to defend Jaheim and Tarrell Roberts all the time, but I think our defense has made plenty of strides since last year. They're bringing a bunch more confidence. I think they had an excellent spring and I think we'll be a much better, much improved defensive unit."