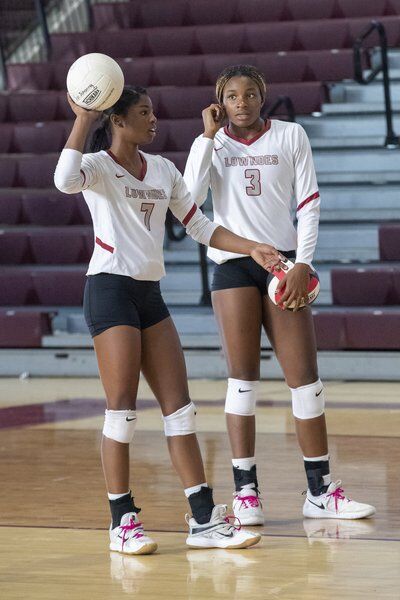 Mary Ann Miller | Special to the TimesLowndes middle hitter Kaylan McConnehead (7) and middle blocker Otaifo Esenabhalu (3) chat during pre-match warmups prior to a GHSA Class 7A state playoff match against Harrison Tuesday at the Crimson Coliseum. 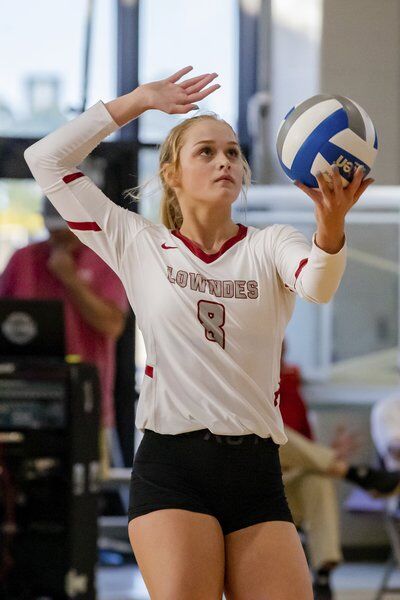 Mary Ann Miller | Special to the TimesLowndes defensive specialist Mary Allison Eubanks (8) prepares to serve during a GHSA Class 7A state playoff match against Harrison Tuesday at the Crimson Coliseum. 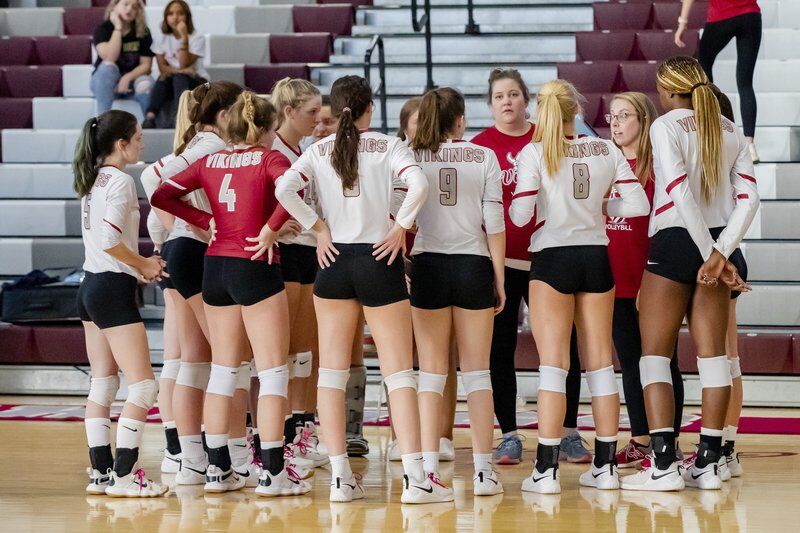 Mary Ann Miller | Special to the TimesLowndes head volleyball coach Autumn Bell, far right, talks to the team during a timeout in a GHSA Class 7A state playoff match against Harrison Tuesday at the Crimson Coliseum. 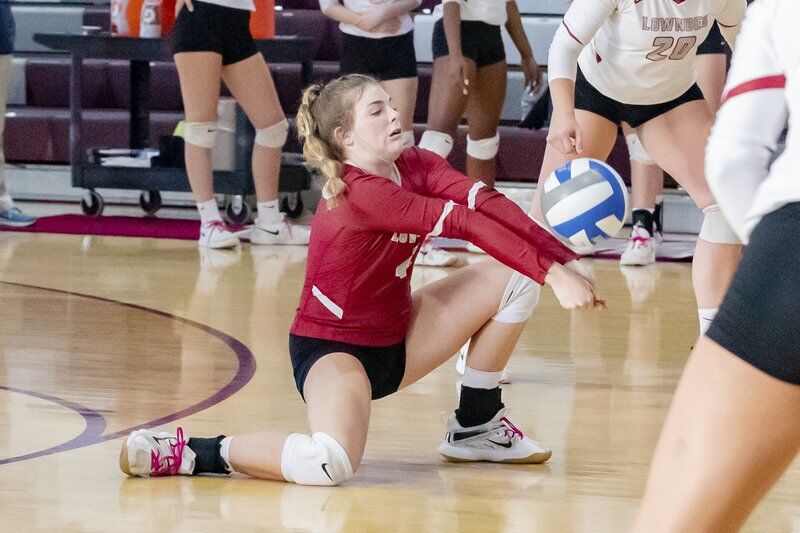 Mary Ann Miller | Special to the TimesLowndes libero Milly Prince (4) digs out a ball during a GHSA Class 7A state playoff match against Harrison Tuesday at the Crimson Coliseum.

Mary Ann Miller | Special to the TimesLowndes middle hitter Kaylan McConnehead (7) and middle blocker Otaifo Esenabhalu (3) chat during pre-match warmups prior to a GHSA Class 7A state playoff match against Harrison Tuesday at the Crimson Coliseum.

Mary Ann Miller | Special to the TimesLowndes defensive specialist Mary Allison Eubanks (8) prepares to serve during a GHSA Class 7A state playoff match against Harrison Tuesday at the Crimson Coliseum.

Mary Ann Miller | Special to the TimesLowndes head volleyball coach Autumn Bell, far right, talks to the team during a timeout in a GHSA Class 7A state playoff match against Harrison Tuesday at the Crimson Coliseum.

Mary Ann Miller | Special to the TimesLowndes libero Milly Prince (4) digs out a ball during a GHSA Class 7A state playoff match against Harrison Tuesday at the Crimson Coliseum.

The Lowndes High volleyball team’s storybook season ended Tuesday in a five-set thriller that saw the team rally from a 0-2 deficit to force a decisive fifth set with the Harrison Hoyas.

For first-year head volleyball coach Autumn Bell, seeing her Vikettes battle back with the pressure on was especially encouraging.

“I’m just really proud,” Bell said. “That was something we hadn’t faced a whole lot of this season. We had faced adversity in a lot of different ways but never being down 0-2. To be able to come back and give them a game and not just take us and sweep us, which I think was a lot of people’s expectation after seeing the first two sets, was good.

“I think we had a bit of emotions that we were playing with, we had a little bit of nerves we were playing with – all things that are expected, especially heading into the playoffs where it’s known if you lose, you’re done. Overall, I’m proud of them. They faced adversity. They rallied back and gave them a fight and that’s all I can really ask for.”

Under Bell, the Vikettes posted their best season yet – finishing 21-8 and winning Region 1-7A for the first time in program history.

The team went into the first round of the state playoffs on a six-game winning streak, most notably completing a season sweep of crosstown rival Valdosta on Oct. 12. After defeating Valdosta, Bell emphasized to her team that the job was far from finished.

“Everybody kept saying, ‘Man, Coach you’re doing a great job,’” Bell said. “Honestly, I know that a lot of coaching does go into it, but at the same time, it comes from the players – their buy-in, the effort and everything that they also put into it as well as my assistant coaches. Having those wins coming in, it was a balance of making sure we understood that the job was not done yet, that we still had more to prove as a program. Each game, I kept saying, ‘It’s a new game, just like the

mentality we’ve had all season. Every ball is a new ball.’

“So, we were just really keeping them hungry and not satisfied with what they had already done leading into each game, Our overall goal when we wrote them down at the start of the season was just to win region and sweep Valdosta. That heavily played into the week leading into the first round of the playoffs because both of those things came true. Those goals were met.”

Prior to her arrival at Lowndes, Bell had been a varsity head coach but never in volleyball. She actually served as head gymnastics coach at Allatoona High School in Acworth, Georgia.

Bell, who moved to Valdosta last year with her husband stationed at Moody Air Force Base, got her first taste of coaching volleyball as head coach of the junior varsity volleyball team and an assistant coach with the varsity squad.

“I was a JV head coach (at Allatoona) and a varsity assistant, so I kind of got to grow there,” Bell said in a phone interview Friday morning. “Then, coming here, I almost didn’t apply for the job because I just didn’t know that I was necessarily the person that was the best equipped. But it just kept coming up. It kept coming back, and religion’s huge for me so I was like, ‘Alright God, is this what you’re telling me to do?’

“I did that and I just applied. I said, ‘Okay, if this is what’s needed for me to do this and that’s the role I’m needed to fill, then I’m willing to step up and take that.’”

After her initial trepidation, Bell got the job.

Once indoctrinated into the Viking way, Bell’s task was to take the Vikettes somewhere they had never been.

“I got the job and stepping into it, it kind of took a lot for me to understand and grasp what has this program been and also, where does the program want to go? Where do I want to see this program go and where do I think we can be just in the first season?” Bell said. “That took a lot of planning, a lot of strategy and really just awesome work from my parents, my players and my assistant coaches. I preached it to my kids and I’ve preached it to my players – communication is huge. As we continued, I had to really remind myself that we just weren’t done yet and keeping that going.”

The Vikettes have an opportunity to build on their historic first season under Bell. The team bids fair well to its three seniors as right side hitter Kate Craven, defensive specialist Jodie Mason and outside hitter Kaycee Bussey will graduate next May.

However, junior standouts Otaifo Esenabhalu, Kaylan McConnehead, Mary Allison Eubanks and rising sophomore Milly Prince will represent the core of the team as upperclassmen next season.

Bell is thrilled to lead next year’s group, but even more excited at the young players on the horizon from the middle school ranks.

“I am pumped,” Bell said. “We have some good talent leaving us, but we also have some good talent that’s coming back. I’m excited. Those girls, a lot of them played club volleyball. Some of them don’t, but they all dabble in a different sport so I know that they’re staying active and staying healthy and still staying in that athletic mindset and getting themselves prepared for what’s to come. Having them come back is just awesome.

“I also can’t wait – we started a middle school program within the county this year, so I’m excited to see where those girls fit in because we’re going to have some transfers, move-ins, all that kind of stuff. To see this cream of the crop of eighth-graders that are coming to us who have now had middle school volleyball under their belt as well understanding playing for their school and how that’s different from their travel teams and such is just going to be really neat and another first for our program. There’s definitely some people coming back that are key components to next year, but there’s also this new that’s gonna come and I just can’t wait to see it all marry and blend together.”

Not bad for a gymnastics coach.

Though there’s not much comparison between the two sports between the lines, Bell sees the common ground that begins in the locker room.

“At the end of the day, in athletics in general, every time I ask any of the groups that I coach, ‘What do you want out of this?’ You get the typical ‘we want to win’,” Bell said. “That’s a go for all sports, I think. But then, the flip side of it is – and I’ve seen this with all the sports that I’ve coached, specifically between gymnastics and volleyball – they want to grow both as people and as athletes. My philosophy is I want everybody to come together, and I want them to know that the person on their left, the person on their right, the person who is competing with them and playing with them is ultimately family.

“That sense of working together, that’s always the goal. I’ve seen that across both sports.”