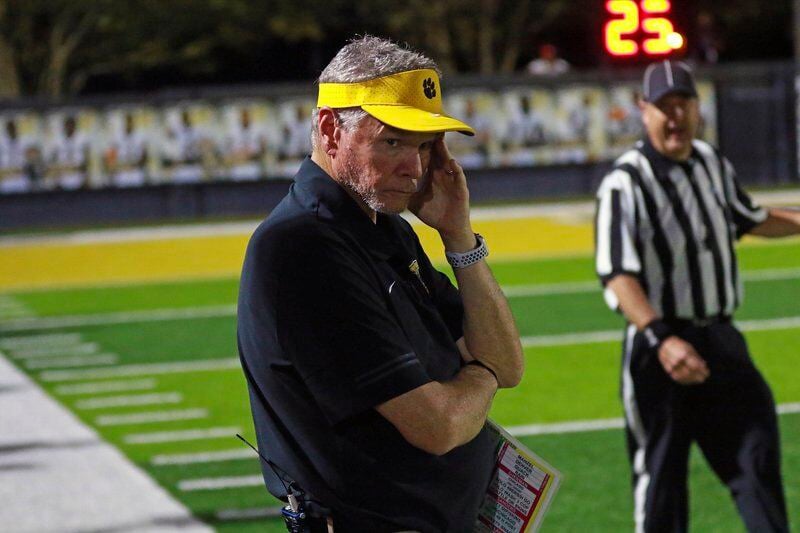 Shane Thomas | The Valdosta Daily TimesValdosta High head football coach Rush Propst holds his head in his hands after a Colquitt County interception in the fourth quarter of a game Friday at Mack Tharpe Stadium in Moultrie. 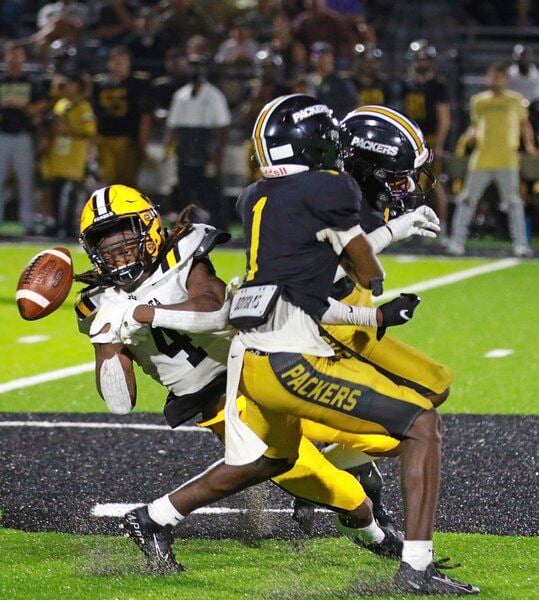 Shane Thomas | The Valdosta Daily TimesValdosta wide receiver Aalah Brown (4) loses control of the ball after a blindside tackle by Colquitt County's Jaheim Ward Friday at Mack Tharpe Stadium in Moultrie. Ward was flagged for a personal foul for the hit on Brown. 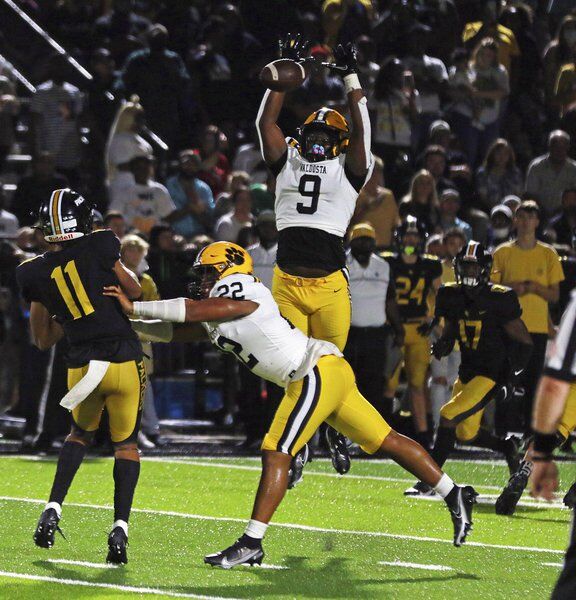 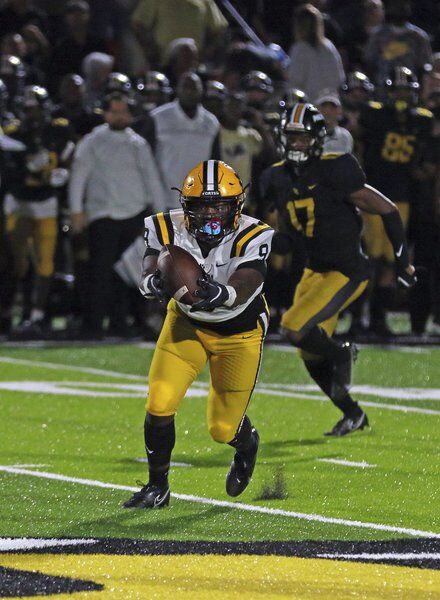 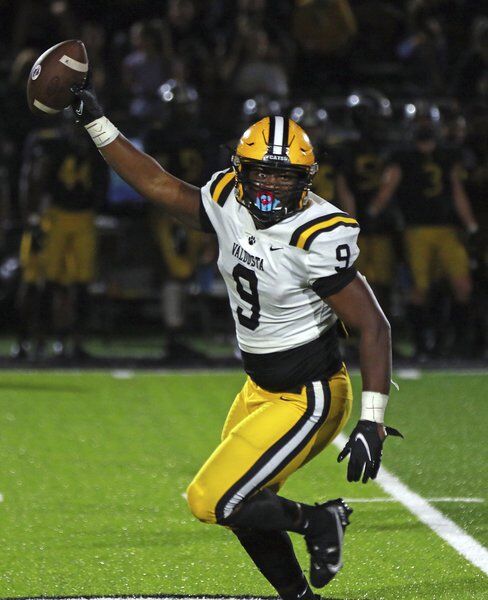 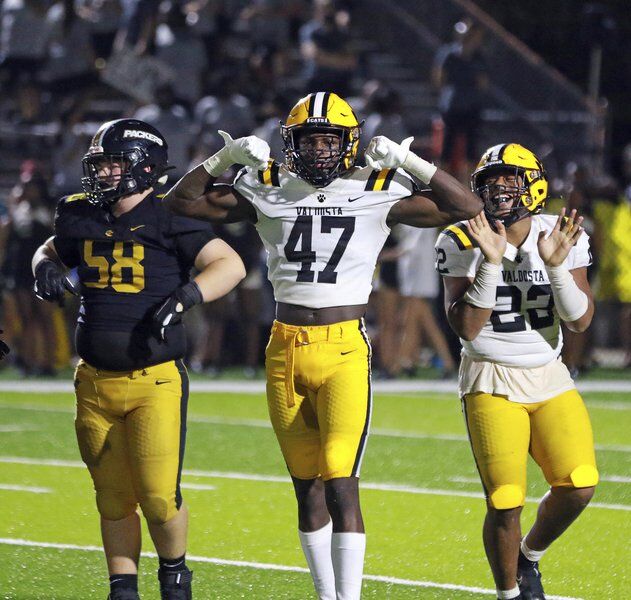 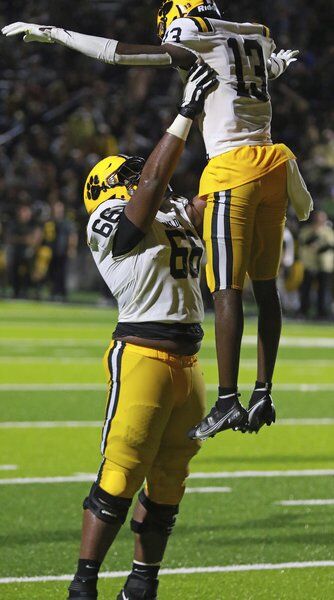 Shane Thomas | The Valdosta Daily TimesValdosta High head football coach Rush Propst holds his head in his hands after a Colquitt County interception in the fourth quarter of a game Friday at Mack Tharpe Stadium in Moultrie.

Shane Thomas | The Valdosta Daily TimesValdosta wide receiver Aalah Brown (4) loses control of the ball after a blindside tackle by Colquitt County's Jaheim Ward Friday at Mack Tharpe Stadium in Moultrie. Ward was flagged for a personal foul for the hit on Brown.

MOULTRIE –– Rush Propst's return to the "Hawg Pen" didn't quite go as planned.

The Valdosta Wildcats (2-1) failed to overcome what Propst called "a fiasco of mistakes" in a 24-10 loss to the Colquitt County Packers (2-0) Friday night.

"Their program, right now, is better than ours," Propst said in the locker room after the game. "At the end of the day, their football team knows how to win. When it gets tough and it gets nitty-gritty, they can rally. They know how to do it and right now, we don't. I don't know if there's doubt or whatever, but I've said it all week –– it's gonna come down to Wildcat pride versus Packer Pride and I just thought the Packers had more pride than we had tonight. They wanted it more."

With the game tied 7-7 at halftime, the 'Cats finally got themselves down into the red zone late in the third quarter with a prime opportunity to score, but came up empty.

A scramble for big yardage by junior quarterback Amari Jones, coupled with a personal foul on the Packers got Valdosta down to Colquitt 8-yard line. On the next play, Jones was flushed out of the pocket but gained three yards before going out of bounds followed by a one-yard plunge by Kaleb Robinson to set up third-and-goal from the Colquitt 4. Perhaps the most pivotal momentum swing came when Jones rolled out and made a beeline for the right pylon of the end zone.

Jones dove with the ball outstretched and appeared to break the plane of the goal line just as he was knocked out of bounds. Unfortunately, Jones was ruled out at the 1-yard line.

On 4th-and-goal, a penalty moved the 'Cats back five yards, forcing the 'Cats to settle for a 25-yard field goal by Angel Martinez with 1:39 left in the third quarter.

"You can tell those kids know how to win and know how to respond when it's tough," Propst said. "They go down 10-7. We should've scored down there, we didn't. We're just a fiasco of mistakes and it was that way all week in practice. We played just like we practiced, the whole week. We're a fiasco of mistakes. That's all we are. Every play, there's a mistake. You can't win a football game when you make those kinds of mistakes."

The Packers seized the momentum with haste as quarterback Xavier Williams connected with star receiver Lemeke Brockington on a 63-yard strike with 13 seconds left in the quarter. The quick retort thrust the Packers back in front 14-10 –– a lead they wouldn't ease their grasp upon the rest of the way.

A field goal by senior kicker Emmanuel Perez pushed the Colquitt lead to 17-10 with 8:41 left.

Needing a score to potentially tie the game, the 'Cats found themselves backed up deep in their own territory, needing to go roughly 80 yards to pull even.

Jones took the snap from the shotgun, but was met with considerable pressure. He threw downfield to the right, but the pass was swiftly picked off by Colquitt senior defensive end Gamal Wallace, who took the ball into the end zone for a 20-yard pick-six to effectively crush any hopes of a Wildcat comeback.

"It's just a bad decision on the quarterback," Propst said of the late turnover-turned-touchdown. "He made a bunch of them tonight, but it ain't all on the quarterback. It's everything –– it's the offensive line, it's the running backs, it's the wide receivers that didn't do a real good job. I just thought they took our receivers away. I can't remember a play that our receivers made that I thought was a big-time play the whole game, and they lost one of their better DBs."

Valdosta had 333 total yards with 275 yards of total offense. The 'Cats rushed for 120 yards on 33 carries, getting another strong running game from Terrell Denson with nine carries for 54 yards.

Jones struggled in his second start of the season, completing just 10-of-25 passes for 155 yards with one touchdown and two interceptions. Jones also had 13 carries for 36 yards in the game.

The Colquitt County secondary, whom Propst called the best secondary his team would see all year, made things tough on Valdosta's receivers all night. The 'Cats were unable to throw downfield with any consistency much of the first half. Once the game started to get away from Valdosta and more deep balls were needed, Colquitt was able to thwart any attacks deep and were aided by several dropped passes.

"Amari had some tough times tonight, but they did a really good job of taking our receivers away," Propst said. "They did a good job. Their secondary is really good, we knew it all week long. We were able to run the ball, but when you can't run the ball with consistency, you're not going to win football games. Then, protection broke down at the end. The sad part about it is, our kids have got to know where we are right now. We've got to know where we are and how we're gonna get there. ... We'll see. We'll see who wants to decide they want to be a true Wildcat. We're not true Wildcats right now."

Both defenses played lights out much of the night as Colquitt blocked two punts, included a scoop-and-score to draw first blood with 3:07 left in the second quarter.

The 'Cats were able to respond with a Jones to Sherman nine-yard touchdown pass to tie the game with 21 seconds left before halftime.

Valdosta's defense made its presence felt early in the first quarter as senior defensive lineman Josh Hill tipped and intercepted Williams for the first turnover of the night.

Mental errors stifled any momentum the 'Cats generated throughout the game. The team was whistled for 13 penalties for 91 yards –– four of which were for 10 yards or more. Surprisingly, the Packers were even more reckless with laundry on the field as they notched an astounding 15 penalties for 137 yards in the game.

"Most of it is mental (toughness) and discipline, or a lack thereof," Propst said of the costly penalties and failure to convert in key spots. "We started out 1st-and-15, I'd bet you seven times. Our first down offense is horrendous. It's horrendous. It's just bad. We had penalty after penalty, mistake after mistake. Then, at the end, I just didn't feel like we fought hard from about 8-minute mark on, I thought we gave up the ghost. I saw their level raise and I saw our level go down."

Offensively, the Packers produced 294 yards of total offense and 325 yards in total.

Williams went 14-for-19 through the air for 188 yards with one touchdown and two interceptions –– one to Hill and the other to linebacker Jacquez McGowan. Williams, like Jones, was also a factor in the rushing attack with 17 carries for 42 yards. Brockington finished the game with three catches for a game-high 102 yards.

Colquitt County: Goes on the road to face Dothan (Ala.) Oct. 2.

"I don't even want to think about Lowndes right now," Propst said. "We're so far away from competing with them. We've got two weeks to get better or it'll be an embarrassment. The whole thing is embarrassing –– how we played, how we coached, how we prepared. We had a rough week. We didn't prepare very well."