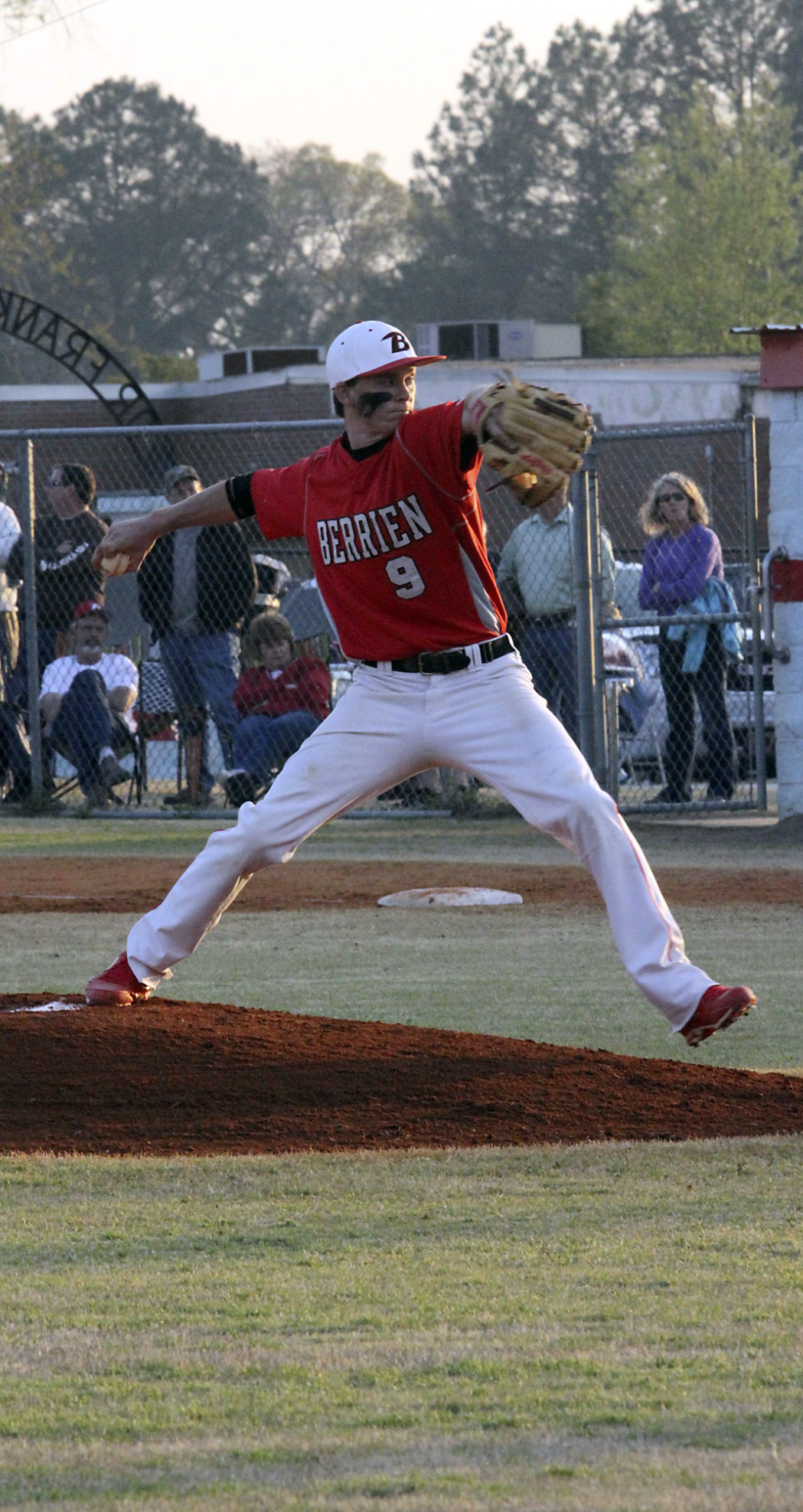 Berrien pitcher Dalton McMillan struck out nine batters and allowed just one hit in the Rebels’ 13-1 win over Cook on Friday night in Nashville. 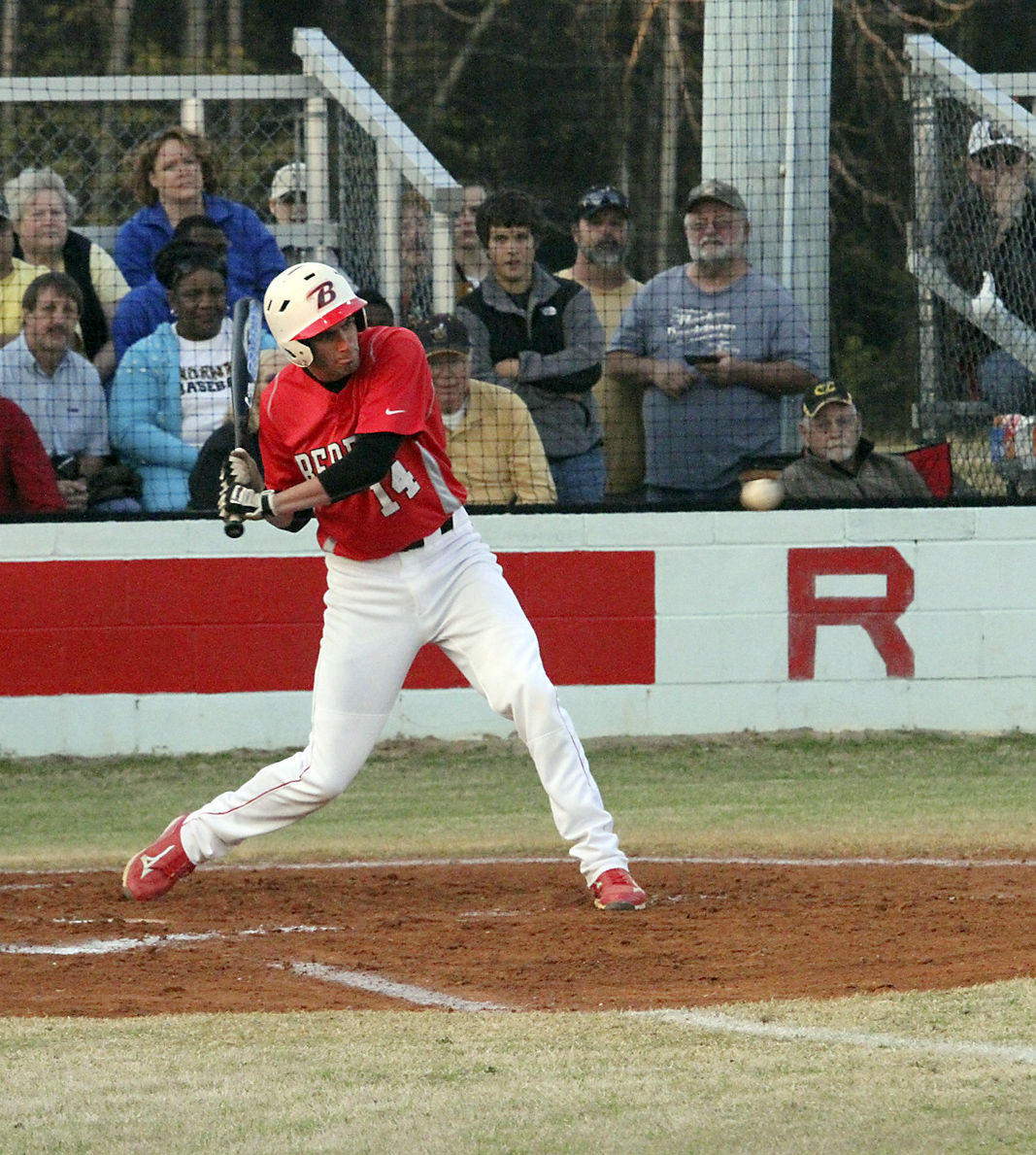 Berrien's Hunter Garrett swings at a Cook pitch during Friday night's 13-1 win over Cook in Nashville. Garrett was 1 for 3 with a run scored and two runs batted in for the Rebels.

Berrien pitcher Dalton McMillan struck out nine batters and allowed just one hit in the Rebels’ 13-1 win over Cook on Friday night in Nashville.

Berrien's Hunter Garrett swings at a Cook pitch during Friday night's 13-1 win over Cook in Nashville. Garrett was 1 for 3 with a run scored and two runs batted in for the Rebels.

On Friday night, it was a great night to be a Berrien Rebel.

In one of South Georgia’s most-heated baseball rivalries, the Rebels (7-2, 2-0 in Region 1-AA) dominated the Cook Hornets (6-3, 1-1 in region play), flexing their muscle in all phases of the game, earning a 13-1 victory by a fifth-inning run-rule and making a statement to the rest of the region.

“We have a lot of good teams in this region,” Berrien head coach Doug Nix said, downplaying his team’s statement win Friday night. “Anybody can beat anybody in the region. You just have games like this, where everything they throw up there, you hit it. And then you have a game where you just can’t hit anything. That is baseball. We are just glad we won it.”

After a slow start, Berrien’s bats caught fire and the Rebels scored one run in the second and another in the third, before exploding for 11 runs on nine hits in a fourth inning that saw 15 batters come to the plate against four different Hornet pitchers.

“We just started hitting it the last couple of days,” Nix said. “I knew we could swing it; I thought it was something we were going to be good at. We struggled early on, but we have started hitting it, and we certainly hit it really well tonight. That is what you always play for — a big inning. …. If you have a big inning, you usually win.”

The Rebels scored their runs in a multitude of ways. They singled, they doubled, they walked, they were aggressive on the base paths and they took advantage of three wild pitches by the Hornets.

In the monstrous fourth inning, every Rebel batter that stepped to the plate scored a run, and two batters even scored multiple runs in the inning.

Everything went the Rebels’ way.

The Rebels were leading 2-1 heading into the bottom of the fourth inning. Shawn Witt led off with a single, followed by singles from Logan Balkcom and Ashton Sparks, which scored Witt. Then, after a Cook pitching change, Travis Branham grounded into a fielder’s choice, but every Rebel runner reached base safely, including Balkcom, who beat the throw to home plate.

The Rebels’ Devonte Bass walked, and the Hornets made another pitching change. Then Dalton Ingram singled to score Branham and Bass, Taylor Griner walked and Hunter Garrett doubled to score Ingram.

The Hornets made a fourth, and final, pitching change in the inning, but Berrien just continued on. Dalton McMillan, the Rebels’ only pitcher on the night, doubled, scoring Griner and Garrett, and the lead was 11-1 with no outs.

After Witt singled, McMillan scored on a wild pitch and Balkcom struck out, becoming the first out of the inning. Then Sparks capped off the Rebels’ scoring with a single, driving in Witt.

The Rebels finished the run-rule victory in style — McMillan struck out the side in the Hornets’ fifth inning.

McMillan’s dominating fifth inning was exactly how the night went for the Rebels. The senior allowed one unearned Hornet run — Parker Bennett reached base on an error and scored on a Dalton Rentz single in the third inning — and allowed just one hit. He struck out nine, including the final five batters of the game.

“He is a senior that has kind of been in the shadows of Drew Harrelson and Kal Simmons the last three years. He has been our No. 3 pitcher since he was a sophomore,” Nix said. “This is his year to shine and he is finally our No. 1. He has great command of all three pitchers, and when you have a high school pitcher that can throw all three pitches for strikes, that is special.

“I couldn’t have asked for a better pitching performance tonight.”

For Cook, Brock Rountree took the loss after allowing five runs (all earned) on six hits in three-plus innings. From there, three separate Hornet relievers faced 12 batters and allowed eight runs, with two failing to record a single out.

Berrien got a run in the bottom of the second inning. Balkcom reached base on a two-out walk and stole second base. Then Sparks singled past Cook’s shortstop to score Balkcom.

After Cook evened the score at 1-1 in the top of the third, the Rebels regained the lead on an Ingram RBI single that scored Garrett in the bottom of the third inning.