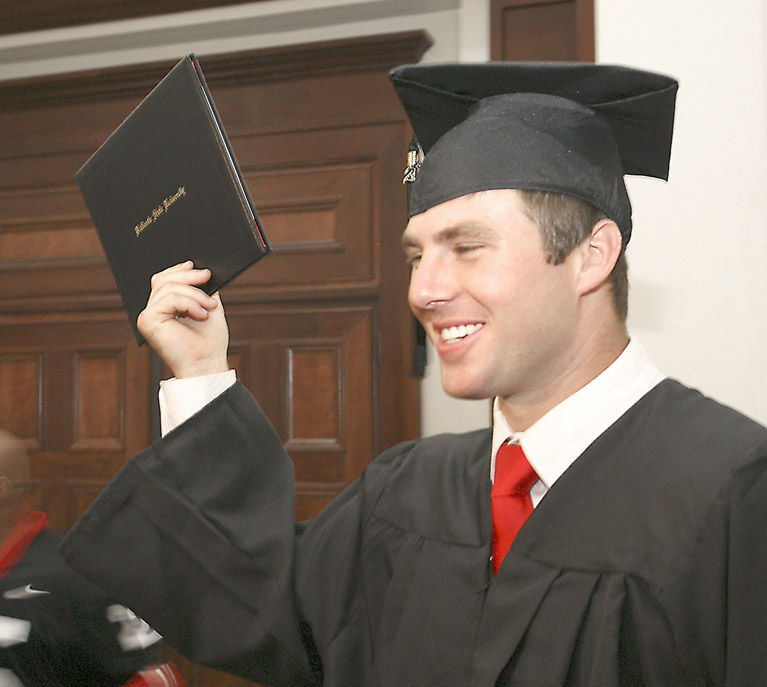 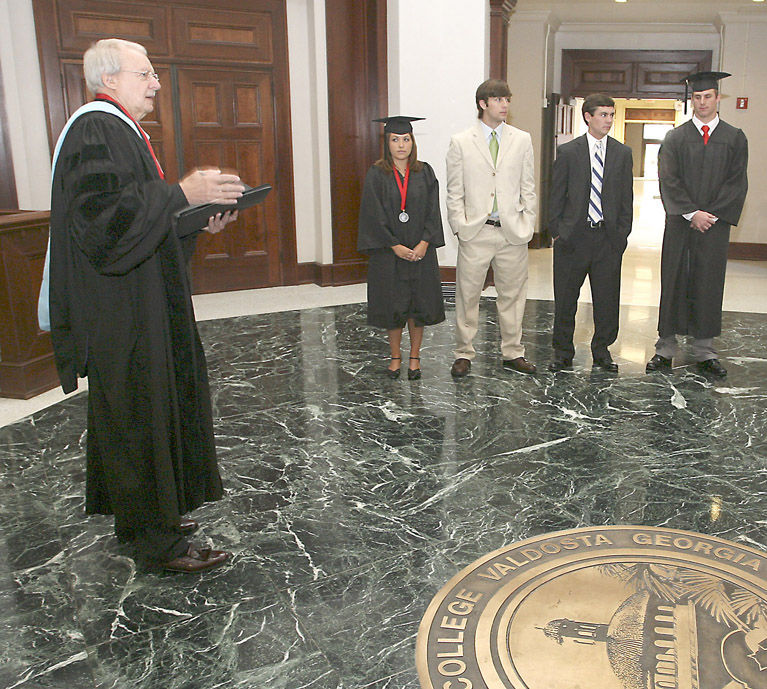 VALDOSTA — As the Valdosta State football team tossed its arms in the wintery air of California, Pa. Saturday, celebrating a semifinal victory, back home many fellow students tossed their caps in the VSU P.E. Complex, celebrating their graduation commencement. Tuesday, a small ceremony was held in the rotunda of West Hall for the commencement of two VSU football players, a graduate assistant coach and the wife of a player. A little after 10 a.m., Clay Callaway, Zach Parker, Emily Parker and Tyler Aurandt were all given their diplomas by VSU president Dr. Ronald Zaccari in front of their families, coaches and members of VSU’s athletic staff. “It’s pretty special,” Aurandt said. “I really appreciate Dr. Zaccari giving us the opportunity to do this. It means a lot to us, and it definitely means a lot to my parents.” While Aurandt’s parents couldn’t be in attendance Tuesday, those of Mr. and Mrs. Parker were there watching. And for the first time in her son’s football career, Charlotte Parker wasn’t seen pumping her fist, or screaming toward the field, but rather with a cheek coated in tears. Known for beaming pride toward her son on the field, a pride for his academic achievements was shown along with the joy for her daughter-in-law. Emily, whose parents reside in Melbourne, Fla., chose to skip her ceremony to cheer on Zach, and her parents were unable to come to Valdosta on Monday, because her father was on a business trip in Nebraska. However, at the last minute, he was sent back to Melbourne, and made the five-hour drive this morning to see his daughter graduate. “I’m really happy that my wife got to do this as well, because she missed her graduation,” Zach said. “I told her to stay home if she wanted to, and she said she was going to be at the game. For her to graduate, suma cum laude, I’m just really proud of her.” Zach graduated with a degree in public relations, Emily finished with a general studies degree, Aurandt now has an accounting and finance degree and Callaway finished with a business administration degree. Their career fields are still up in the air, as Saturday’s national championship game awaits. “It still hasn’t sunk in, because we’re still playing ball, and still on campus,” Callaway said. “But, it’s a great feeling.” The event was made possible by a member of the VSU athletic department, Traci Gast, getting Dr. Zaccari to dust off his graduation regalia. “We have three players who really wanted to be a part of the commencement, but couldn’t do that because of travel for the semifinal,” Dr. Zaccari said. “We thought this would be very special to have the parents come in. So, I put on all the regalia to be a part of it. It was a great effort on everyone’s part.”