Police: Wreck kills one in Valdosta 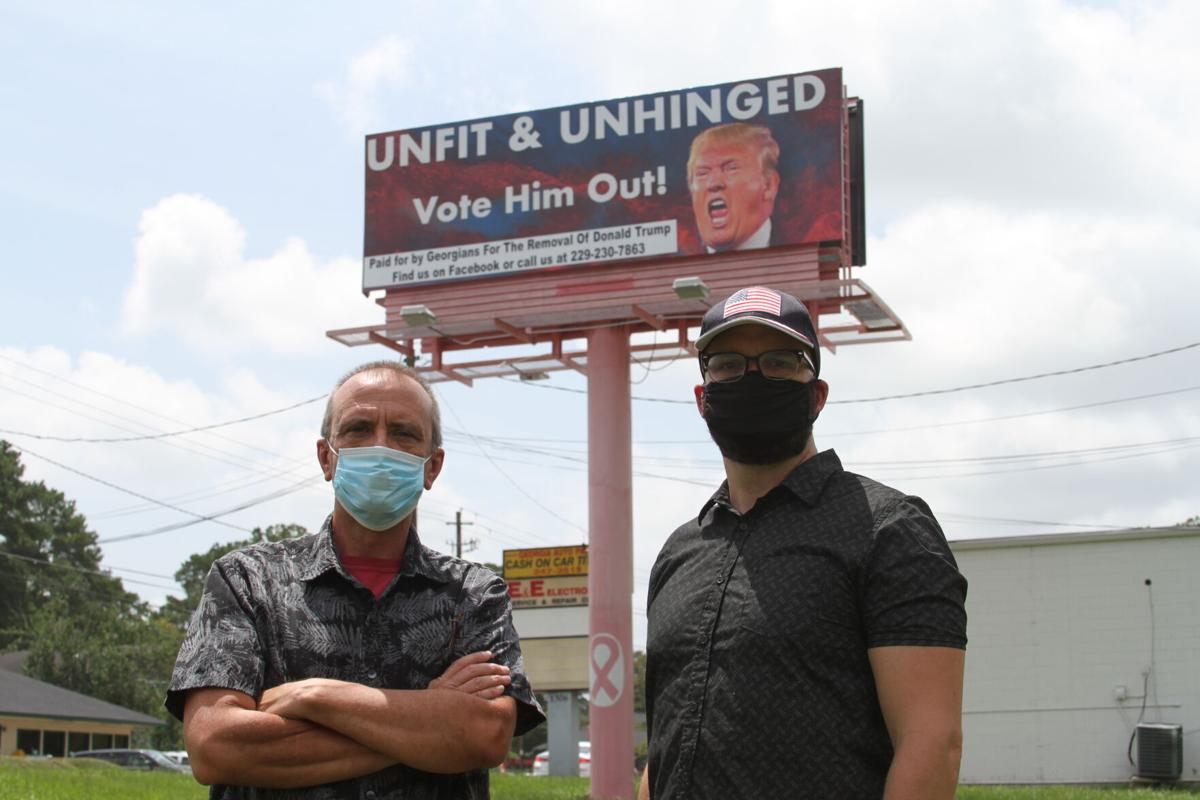 Michael Noll and Tom Hochschild, members of Georgians for the Removal of Donald Trump, were pleased to win their lawsuit against the Roger Budd Company and put up their message. 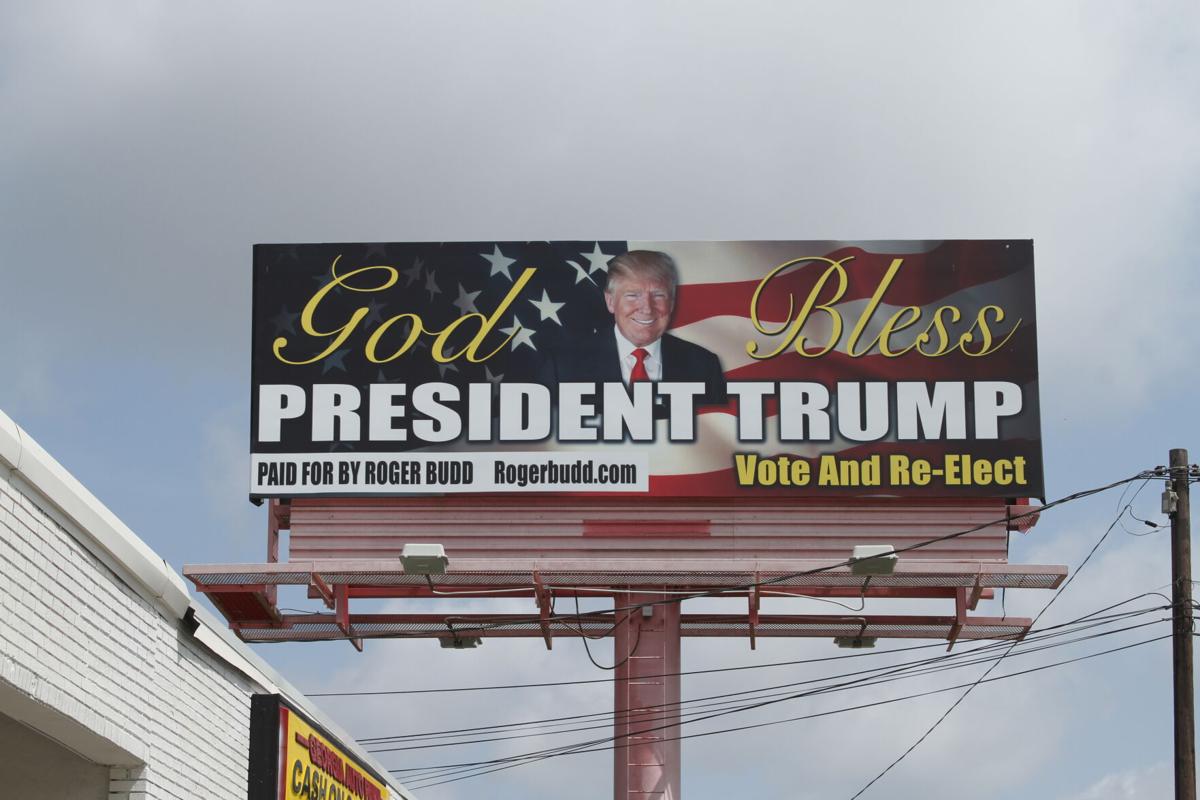 Roger Budd put up a billboard supporting the president back-to-back with the anti-Trump one. 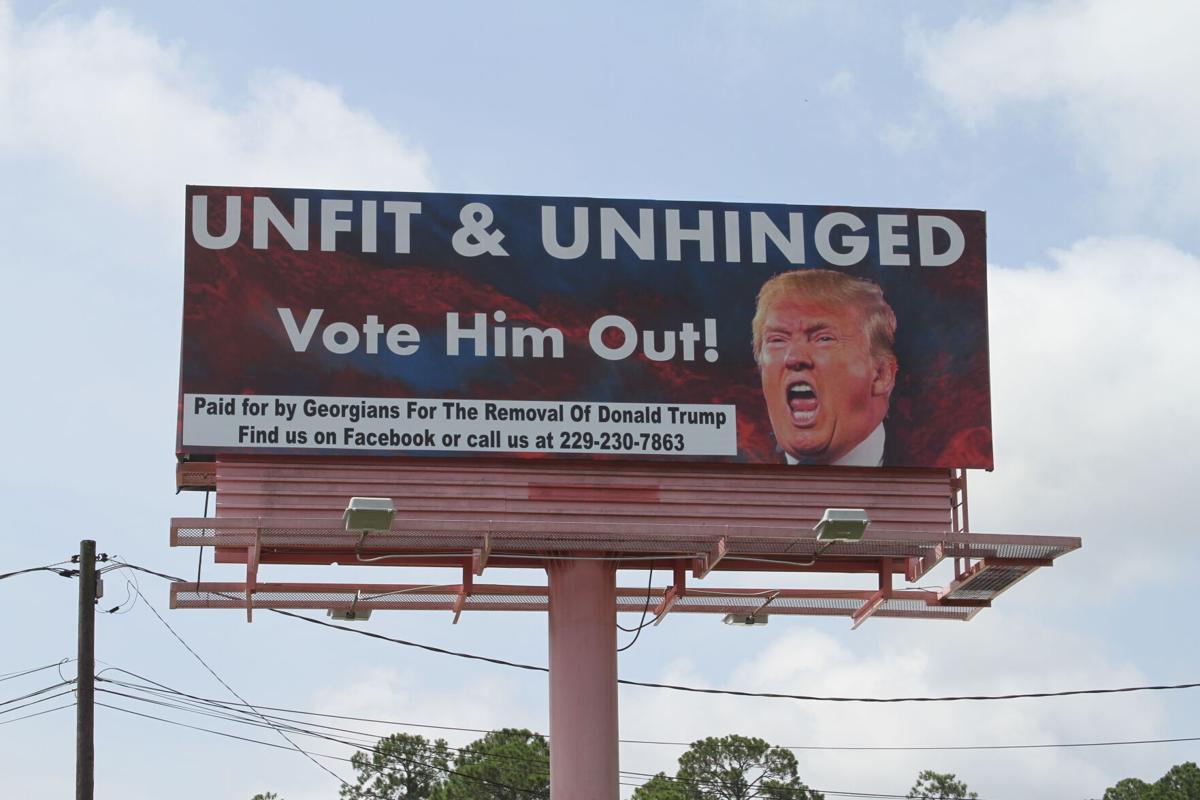 The new anti-Trump billboard by Georgians for the Removal of Donald Trump was put up July 20. 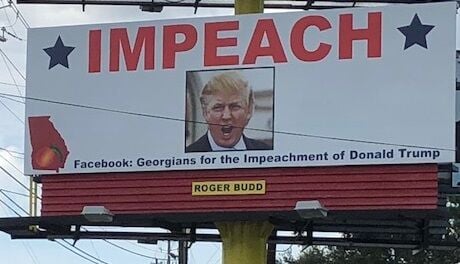 The first billboard put up in August 2018. It was taken down by the Roger Budd Company after one day.

Michael Noll and Tom Hochschild, members of Georgians for the Removal of Donald Trump, were pleased to win their lawsuit against the Roger Budd Company and put up their message.

Roger Budd put up a billboard supporting the president back-to-back with the anti-Trump one.

The new anti-Trump billboard by Georgians for the Removal of Donald Trump was put up July 20.

The first billboard put up in August 2018. It was taken down by the Roger Budd Company after one day.

VALDOSTA — A lawsuit ruling has resulted in a tale of two billboards.

For those traveling northbound, a sign reads "God Bless President Trump" and "Vote And Re-Elect" with a smiling photo of the president.

Southbound drivers see its polar opposite displaying "UNFIT & UNHINGED" and "Vote Him Out!" across its vinyl sign with a shot of Trump mid-shout.

Both billboards went up July 20 and stem from a nearly two-year legal battle between the Facebook group Georgians for the Removal of Donald Trump and the billboard company Roger Budd Company.

In August 2018, the group paid for a billboard reading "Impeach" with a picture of President Donald Trump, but the sign lasted only a single day. The Roger Budd Company removed the billboard and was promptly sued by Georgians for the Removal of Donald Trump.

On July 2, a Georgia Superior Court ruling resolved the lawsuit requiring the Roger Budd Company to honor the year-long contract with the group and allow them to put up a billboard at a monthly rate of $430 for 12 months.

In response to losing the lawsuit, Roger Budd, owner of the Roger Budd Company, wanted to show his support for the president and chose an opposing message on the opposite side of the anti-Trump billboard.

“I’m a firm supporter of Donald Trump," Budd said. "We had a lawsuit as you know. The judge sided with their side, and I wanted to put up something that showed my support for Donald Trump.”

Tom Hochschild, a member of Georgians for the Removal of Donald Trump and a professor at Valdosta State University, said the group was excited to see their message again but was not pleased with Budd's decision to put up a pro-Trump billboard on the same day.

Budd lamented agreeing with the group's wishes in the first place back in 2018, but in the spirit of the First Amendment, put up their billboard and his own.

“Obviously we have a system of laws in the United States and the freedom of speech is one, so glad to have the right to put it up. I don’t really agree with negative publicity like that," Budd said. "I shouldn’t have agreed to put it up in the first place, but I did so that’s the price I had to pay. They can put theirs up and I can put mine up, too.”

The opposing viewpoints engender necessary conversations between Americans, said Michael Noll, a fellow member of the group and VSU professor.

"It ultimately stirs up the kinds of conversations we must have as a society," Noll said

Budd said he hopes more people will see his side of the billboard and support Trump.

“Hopefully they’ll side with me and Donald Trump because he’s done great things for America," he said. "Business has never been greater in spite of COVID-19. We’re doing well. Valdosta is doing well. People are renting buildings. We’ve got more billboards rented than ever before.”

On Thursday, the Bureau of Economic Analysis, an arm of the federal commerce department, reported that the United States GDP had its worst quarter on record shrinking 32.9%.

For Budd, his message and intentions are simple: to see the president reelected come November.

“Donald Trump has been great for America. Hopefully he can win again,” he said.

With a 12-month contract, Hochschild noted his group planned to put up different signs and even change locations if they want. He said the group was rejected by five billboard companies in 2018 before Budd agreed to their anti-Trump message

"I'm calling on Lowndes County Commission and the (Valdosta) City Council to pass some sort of ordinance as to what types of signs are permitted in South Georgia and the City of Valdosta," Hochschild said. "... A lot of people when they're driving to Florida, driving to Disney World, they've got kids in the backseat, and they're seeing all kinds of wacky billboards going down the I-75 South. I think that should be monitored a little more closely."