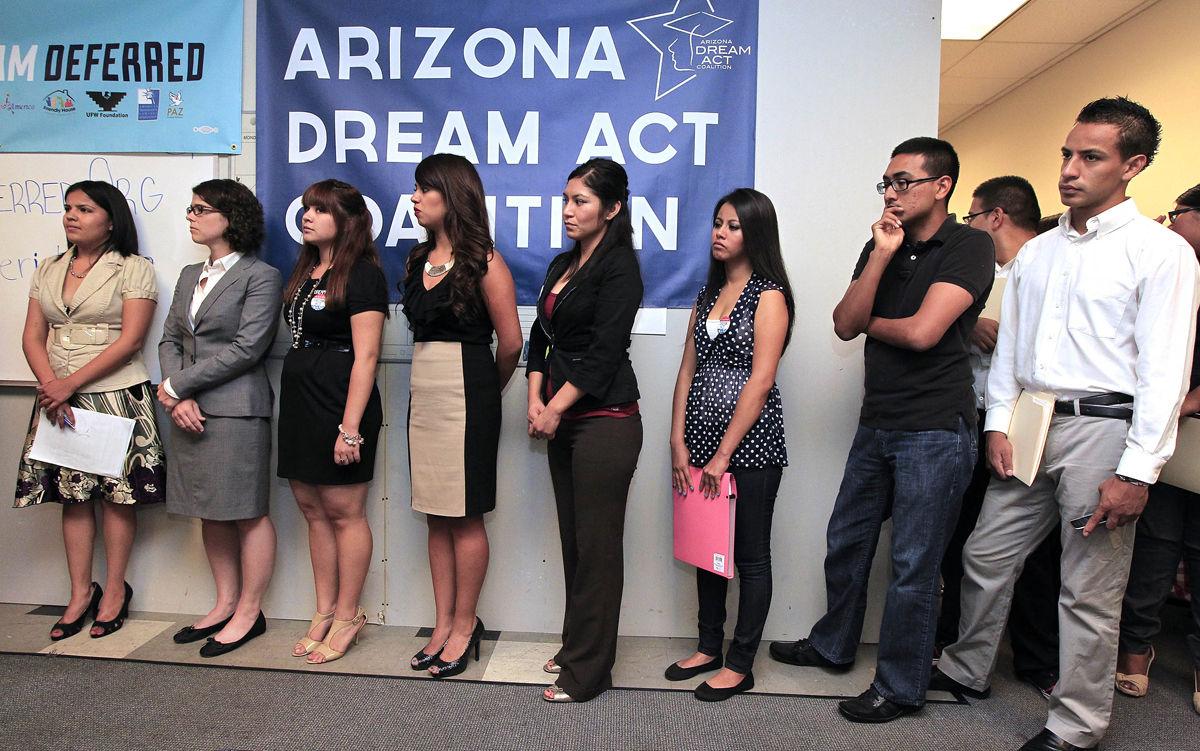 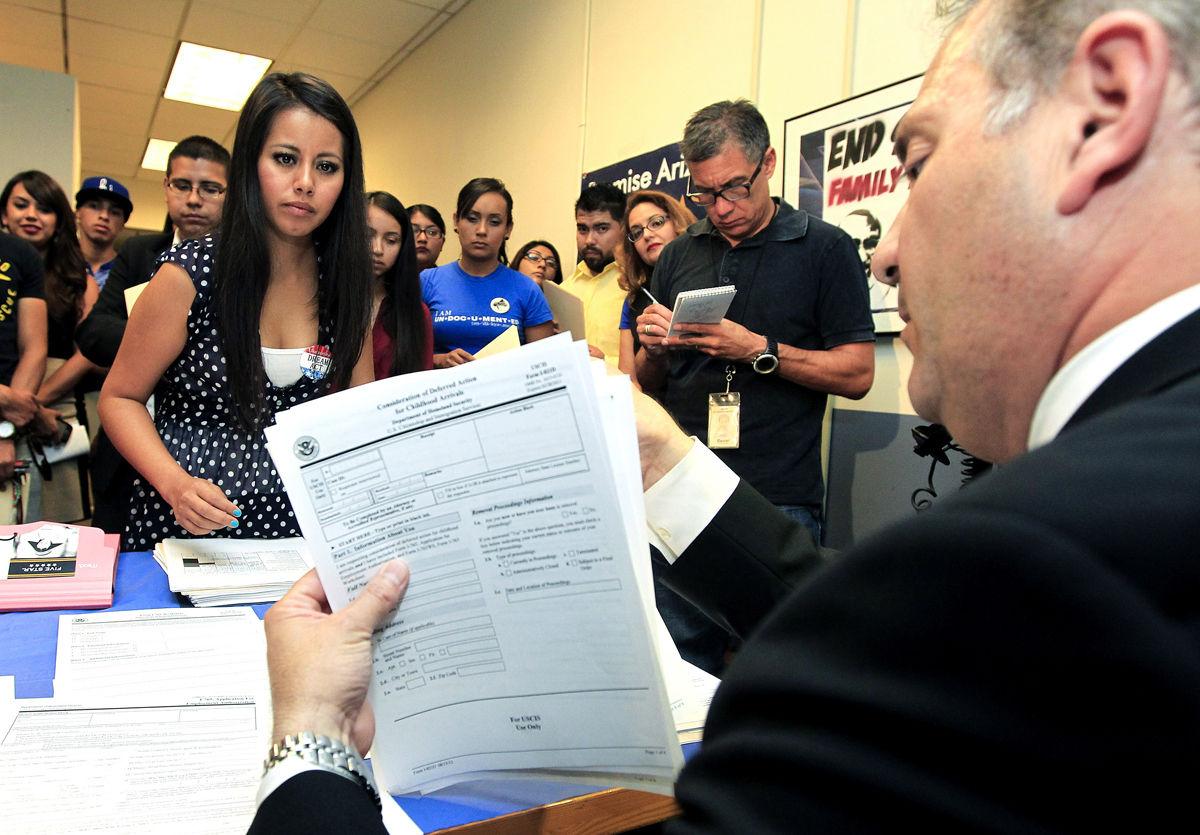 This Aug. 15, 2012 photo shows, young immigrants, including Gaby Perez, left, as she hands over all her paperwork to get guidance from immigration attorney Jose Penalosa, right, for a new federal program, called Deferred Action, that would help them avoid deportation in Phoenix.

This Aug. 15, 2012 photo shows, young immigrants, including Gaby Perez, left, as she hands over all her paperwork to get guidance from immigration attorney Jose Penalosa, right, for a new federal program, called Deferred Action, that would help them avoid deportation in Phoenix.

Schools and consulates have been flooded with requests for documents after President Barack Obama announced a new program allowing young people living in the country illegally to apply for two-year renewable work permits. Up to 1.7 million people may qualify, which would be the broadest stroke to bring illegal immigrants out of the shadows in more than 25 years. Applicants — some eager to get in line before November’s presidential elections — are finding they may have to wait a few weeks longer for a prize that has eluded them for years.

The clamor for documents is an early sign that the policy is highly popular. The Obama administration said this month that it approved the first 29 applications among more than 82,000 received since it began accepting requests Aug. 15.

The Mexican consulate in Los Angeles issued 17,444 passports and consular identification cards in August, up 63 percent from the same period last year, said Consul General David Figueroa, who attributes the entire increase to the new policy. The wait for a passport appointment at the largest Mexican consulate grew from one or two days to 40 days last month, then fell to 30 days after the consulate hired five employees to handle the increased workload, opened its main office on Saturdays and extended hours at satellite offices to seven days a week from five.

U.S. Citizenship and Immigration Services recently clarified expectations, relieving applicants who worried they would need exhaustive proof of their whereabouts. Eligible applicants must have come to the U.S. before they turned 16, be 30 or younger, be high school graduates or in college, or have served in the military, and they cannot have serious criminal records. They also must have lived in the country since June 2007.

The new guidelines, issued Sept. 14, say applicants should provide as much evidence “as reasonably possible” that they stayed in the U.S. — ideally for every year — but that they don’t have to account for every day of the last five years.

The government also reassured employers who were nervous about providing evidence that they hired an illegal immigrant. Documents will not be used against employers unless they committed “egregious violations of criminal statues or widespread abuses.”

Laura Lichter, a Denver attorney and president of the American Immigration Lawyers Association, said the new guidelines alleviated many concerns for applicants.

“I have to compliment (the government) for doing an excellent job of getting good, solid information out there,” said Lichter, adding that she rarely praises the authorities.

Rep. Lamar Smith, chairman of the House Judiciary Committee and a critic of the Deferred Action for Childhood Arrivals policy, called the latest changes an example of how the Obama administration “routinely puts illegal immigrants first at the expense of the American people.”

“Administration officials intentionally made these guidelines vague enough so that potentially millions of illegal immigrants can qualify.  And now the administration has revised their guidelines to be specific enough to protect unscrupulous employers from facing legal action for knowingly hiring illegal immigrants that have applied for the amnesty program,” he said.

Since July, transcript requests at Aurora Public Schools in suburban Denver jumped to 1,500, up by more than two-thirds compared to the same period last year. More than half of this year’s requests are tied to the new immigration policy.

The Yakima School District in central Washington state is taking nearly a month to produce transcripts, though college applicants go to the top of the pile and have to wait only two days, said Roy Knox, director of central registration, who planned to bring in a substitute teacher to help. Before the new immigration policy, transcripts were generally a same-day service.

Some campuses in Los Angeles Unified School District battled backlogs of 200 to 300 applicants, prompting administrators to create an online form this month that funnels applications to a central location, said Lydia Ramos, a special assistant to the superintendent.  The district, which put workers on overtime to catch up, anticipates spending about $200,000 on the requests, including $15,000 for postage.

The Los Angeles school board, facing a backlog of 2,300 requests, ordered administrators this month to develop a plan that cuts waiting times from up to 45 days to seven days. It estimates 50,000 requests over the next few months.

San Diego Unified School District set up a temporary office and anticipates spending $45,000 on the effort through Dec. 14, said Linda Zintz, communications director. Between 80 and 100 people call or visit daily, but the office can only handle about 30 requests daily, creating waits of more than two weeks for an appointment with generally same-day service.

Abel Oregel, 29, called after attorneys for an advocacy group offered free advice on getting a permit. The opportunity comes 26 years after his parents took him across the border illegally on a mountain trek. The two-week wait for an appointment meant he wouldn’t have his documents for his next meeting with the attorneys.

“They told me they were really short on staff,” said Oregel, a native of Guadalajara, Mexico, who has lived in Southern California since he was 3.