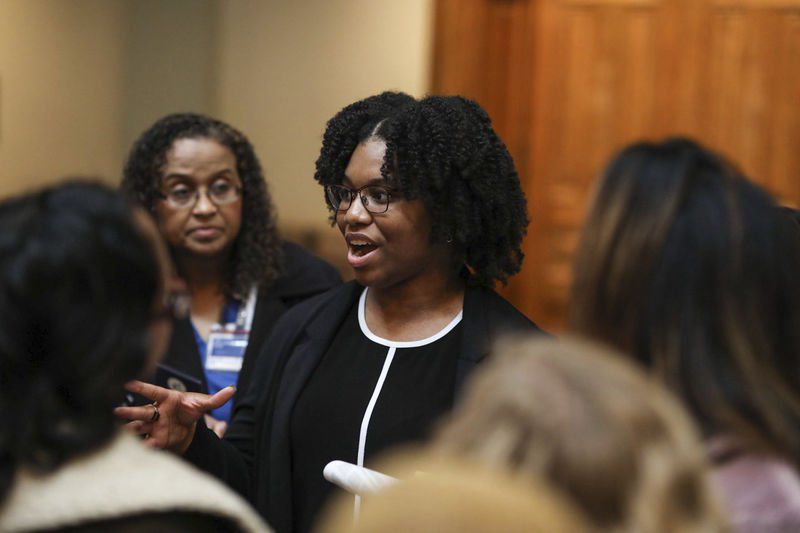 Riley Bunch | The Valdosta Daily TimesAmber Mack, research and policy analyst for Healthy Mothers, Healthy Babies Coalition Georgia, talks this week with a group about the issue of maternal mortality in Georgia at the Capitol Building on Maternal Mortality Awareness Day. 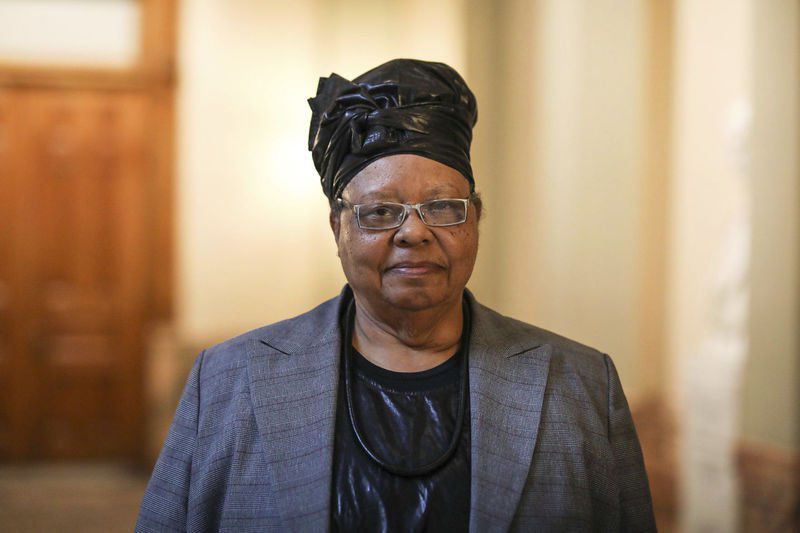 Riley Bunch | The Valdosta Daily TimesUmm Salaamah Abdullah-Zaimah, elder midwife and current co-chair of the Community Midwives National Alliance based in Atlanta, advocates for community midwives at the Capitol.

Riley Bunch | The Valdosta Daily TimesAmber Mack, research and policy analyst for Healthy Mothers, Healthy Babies Coalition Georgia, talks this week with a group about the issue of maternal mortality in Georgia at the Capitol Building on Maternal Mortality Awareness Day.

Riley Bunch | The Valdosta Daily TimesUmm Salaamah Abdullah-Zaimah, elder midwife and current co-chair of the Community Midwives National Alliance based in Atlanta, advocates for community midwives at the Capitol.

ATLANTA — Lawmakers have introduced legislation to address maternal mortality in the state, in the early weeks of the session.

Georgia legislators have grappled for years with how to address what some call the state’s “maternal mortality crisis.” Efforts to enact legislation to expand access to perinatal services have been bipartisan.

Advocates are optimistic that lawmakers addressing the issue in a study committee shined a bright enough light on the issue to get legislation passed.

Democrats in both the House and Senate introduced legislation this week to expand Medicaid for new mothers and allow women to seek obstetrical and gynecological care in bordering states.

Wednesday, Maternal Mortality Awareness Day at the Capitol, Amber Mack, research and policy analyst for Healthy Mothers, Healthy Babies Coalition of Georgia, said she is “cautiously optimistic” about legislation being enacted this year — including extended Medicaid coverage for new mothers.

Sen. Jen Jorden, D-Atlanta, introduced legislation Wednesday to extend Medicaid coverage for new mothers from the current 90 days to no less than 12 months.

The change would require a Medicaid state plan amendment submitted to the United States Department of Health and Human Services.

Rep. Sharon Cooper, R-Marietta, chair of the House Health and Human Services committee, said during maternal mortality study committee meetings in October she is actively lobbying the governor’s office to get that money back.

A bipartisan panel of legislators at a health-care policy breakfast earlier this month, all supported the idea of expanding Medicaid for new mothers — but with budget cuts and programs that would have bolstered maternal mortality research already on the chopping block, the possibility of expansion is unknown.

“We want to ensure that women have that continuum of care,” Mack said.

But now the debate is how long the Medicaid coverage extension can go in the tight budget climate.

“Six months is better than two months but our ultimate goal is a full year,” Mack said. “If we do get six months, that's still a win in our book, but we will continue to advocate for an extra six months to eventually get that 12 months.”

Senate Majority Leader Mike Dugan told reporters Wednesday that Senate Republicans were looking at six months of extended coverage. The issue, he said, is personal to him.

“If they can figure out a way to pay for a year, that’d be something to consider,” Dugan said. “We’ve been looking at the six months — to do the most good for the most people.”

Rep. Sandra Scott, D-Rex, introduced legislation Monday that would allow out-of-state women’s health-care providers within 50 miles of the Georgia border to be considered an in-state provider as long as the doctor is in “good standing” in their home state.

Out-of-state providers who qualify would receive the same pay rate provided for Georgia Medicaid recipients and Department of Community Health would be allowed to enter into agreements with bordering states determining pay rates.

Mack said Scott's bill would help women in the many Georgia counties that have no women's health-care providers.

Scott, who is from Florida, said the legislation came from talking to Tallahassee doctors who had Georgia patients seeking their services.

"OBGYNs in rural Georgia are slim to none," Scott told CNHI. "I think it would be beneficial to Georgia to allow female patients who are having complications, having a child or having postpartum care, to go right across the Georgia-Florida line and get care."

Midwives are making their case to lawmakers that expansion of the profession would bring care to mothers into homes and promote women already in communities to step up to the task.

House Bill 717, introduced last week, would create a certified community midwife board, appointed by the governor, that would oversee licensing and certification.

Community midwives would be restricted to handle only “low-risk” pregnancies and labors that are not induced with medication and the infant is born within a regular time period. If there are signs of any abnormalities, midwives would recommend medical attention immediately.

Rep. Karen Mathiak, R-Griffin, is the lead sponsor on the somewhat bipartisan effort, with five Republican House members and one Democrat signed on — including Rep. Darlene Taylor, R-Thomasville.

Umm Salaamah Abdullah-Zaimah, elder midwife and current co-chair of the Community Midwives National Alliance based in Atlanta, said getting to the problem early is the best thing Georgia can do for women.

Some legislative efforts are “band-aid fixes” that may not address the full problem.

“I strongly believe we need to go to the community for the answer,” Abdullah-Zaimah said, “and train the women who are already there and already respected. ... If you make sure people get the care they need, when they need it, it will save money.”