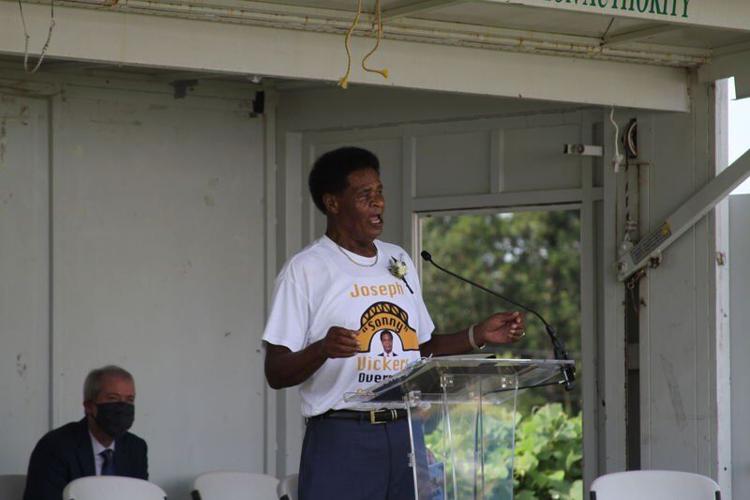 File Photo: The Valdosta Daily TimesValdosta City Councilman Joseph 'Sonny' Vickers speaks during the ceremony to name the West Hill Avenue overpass for him in 2020. 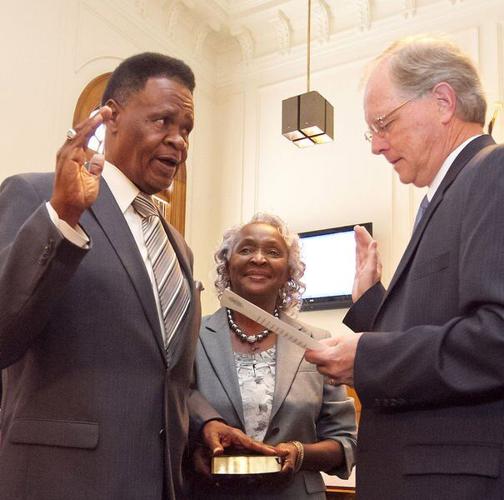 File Photo: The Valdosta Daily TimesJoseph ‘Sonny’ Vickers is sworn in as mayor of Valdosta by Judge Richard Cowart as Laverne McHellen holds the Bible during a 2011 Valdosta City Council meeting.

File Photo: The Valdosta Daily TimesValdosta City Councilman Joseph 'Sonny' Vickers speaks during the ceremony to name the West Hill Avenue overpass for him in 2020.

File Photo: The Valdosta Daily TimesJoseph ‘Sonny’ Vickers is sworn in as mayor of Valdosta by Judge Richard Cowart as Laverne McHellen holds the Bible during a 2011 Valdosta City Council meeting.

"Councilman Vickers' life is a record of dedication to family and community," according to a statement released by the City of Valdosta.

"Councilman Vickers was not just a councilman, he was my friend and a leader who I have admired and respected since we first met," Valdosta City Manager Mark Barber said in a statement. "The city will definitely feel this loss from a phenomenal man and leader. He will be deeply missed."

“I like to be in a position to help the little guys when they call and need someone to listen,” Vickers said in a past interview. “As the city moves forward, I’d like to be a part and love serving the community and I feel that I make a difference."

Vickers, the son of the late Jessie and Mattie Vickers, was born in Valdosta in 1942 and attended city schools.

He had a long history of public service, founding the Black Community Action Group and the Valdosta Youth Voters League in 1968, working on the Valdosta Housing Task Force in 1974 and organizing the 3rd District Community Association. Vickers also served as vice president of the Valdosta-Lowndes chapter of Habitat for Humanity.

In 1970, he served on a committee to help settle a walkout at Valdosta High School and in 1972 called a meeting of Valdosta residents and elected officials to provide bus transportation for Valdosta schoolchildren.

In 1985, he was a founding member of the Valdosta-Lowndes County Dr. Martin Luther King Jr. Commemoration Association, becoming its president in 1992.

He had served in the National Association for Advancement of Colored People, the Legislative Black Caucus and the Georgia Association of Black Elected Officials.

He was first elected to Valdosta City Council in 1985 following an overhaul of Valdosta’s election system; previously, all seats were at large, which made it difficult for a Black candidate to gain any traction. The new system provided for six election districts plus one at-large candidate, and Vickers was elected, as were two other Black candidates, Willie Houseal and Bunnis Williams. Vickers represented District 3 for more than three decades and lived in the Barber Park area most of his life.

Through the years, Vickers came to be an elder statesman on City Council. He smoothed debates and conflicts between council members, often with only a few words.

Vickers was appointed the city’s mayor by City Council in 2011, to fill an unexpired term.

"Vickers reminded people of what is good about Valdosta and what can be accomplished within our city that knows no limits," according to a Valdosta Daily Times editorial honoring Vickers at the end of his short term as mayor. "He kept a steady hand on the helm, keeping the city on course, setting an example that the city and its institutions are larger than any one person or any one incident. He reminded us that the city’s institutions are a constant and that the city can, indeed, move on.

"Being mayor was not a position that Vickers sought. A long-time city councilman, he agreed to be Valdosta’s temporary mayor, with the understanding he would return to represent District 3 once the new mayor took the oath of office."

Vickers often said he viewed his time as mayor as serving as a bridge and as restoring people's faith in city government.

Vickers received many honors in his life.

In 1993, he was presented the Humanitarian Award by the Alpha Gamma Gamma Chapter of Omega Psi Phi Fraternity, the Award of Appreciation in 1993 from Macedonia First Baptist Church, and was presented a Lifetime Honorary Membership in the Valdosta-Lowndes County Dr. Martin Luther King Jr. Commemoration Association in 1985.

Other recognition included the Macedonia Image Award presented to him in 1995 by Macedonia First Baptist Church, the 1996 Humanitarian Award by the Valdosta-Lowndes County Dr. Martin Luther King, Jr., Commemoration Association, and the 2007 Award for Exemplary Community Service presented by the 100 Black Men of Valdosta.

He received in 2007 the Award for Notable and Outstanding Service in the Community presented by First Antioch Missionary Baptist Church and was recognized in 2009 by the Kill-Me-Quick Community for his support of the Westside Archives.

In 2020, a railroad overpass on West Hill Avenue was dedicated in his name.