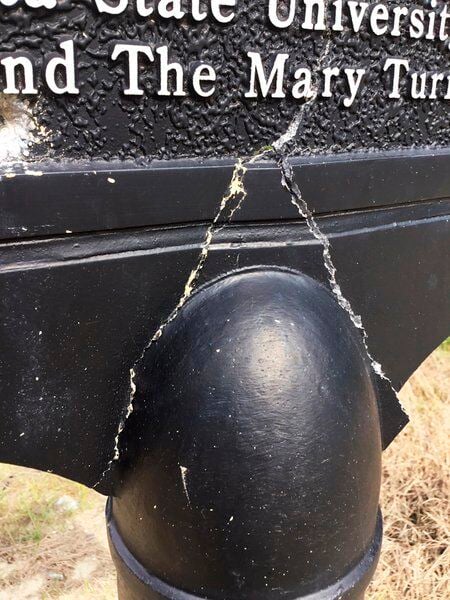 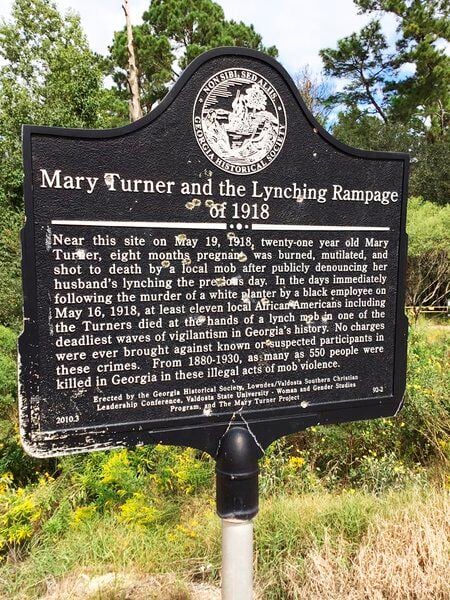 Mary Turner Project photoA bullet-ridden historical marker highlighting the lynching of Mary Turner in 1918 has been removed from its location near Hahira and will be replaced.

Mary Turner Project photoA bullet-ridden historical marker highlighting the lynching of Mary Turner in 1918 has been removed from its location near Hahira and will be replaced.

VALDOSTA — A historical marker highlighting a dark chapter in South Georgia’s history has been temporarily removed after being vandalized again.

The marker, located near Hahira close to the Lowndes and Brooks County line, marked the site where Mary Turner, a 21-year-old pregnant black woman, was killed by a mob after denouncing her husband’s lynching in 1918.

The marker had been so severely vandalized with gunshots and cracked by off-road vehicles that it was beyond repair and has to be replaced, said Mark George, coordinator for the Mary Turner Project.

“There are at least 27 bullet holes / impacts in the marker,” he said.

The damage was first noticed last Monday but most likely occurred in September, George said.

The marker was removed Thursday; there is no set timeline for the new marker’s installation, he said.

History shows that in the early 20th century, a white Brooks County plantation owner often bailed people out of jail. He then worked them on his land until he considered the bail debt repaid.

In 1918, he bailed out a 19-year-old black man who refused to work because he said he was sick. The white man beat the black teen. After the beating, the black teen shot and killed the white plantation owner.

This spurred a “mob-driven manhunt for the teen and others believed to be involved in the shooting.

“That manhunt lasted for more than a week and resulted in the deaths of at least 13 people, with some historical accounts suggesting a higher number of persons killed,” according to the Mary Turner Project. The historical marker mentioned 11 people killed.

Mary Turner and her husband were among this number.

In May 1918, Mary Turner protested the killing of her husband. She was 21 years old and eight months pregnant; previous accounts have suggested she was only 20 years old.

She threatened to swear out warrants, which “enraged locals ... Mary Turner fled for her life only to be caught and taken to a place called Folsom’s Bridge on the Brooks and Lowndes counties’ shared border.”

The mob tied her ankles, hanging her upside down from a tree. They doused her with gasoline, burning away her clothes. They cut her baby from her and killed the unborn child. They riddled Mary Turner’s body with bullets.

She and the baby were buried 10 feet away.