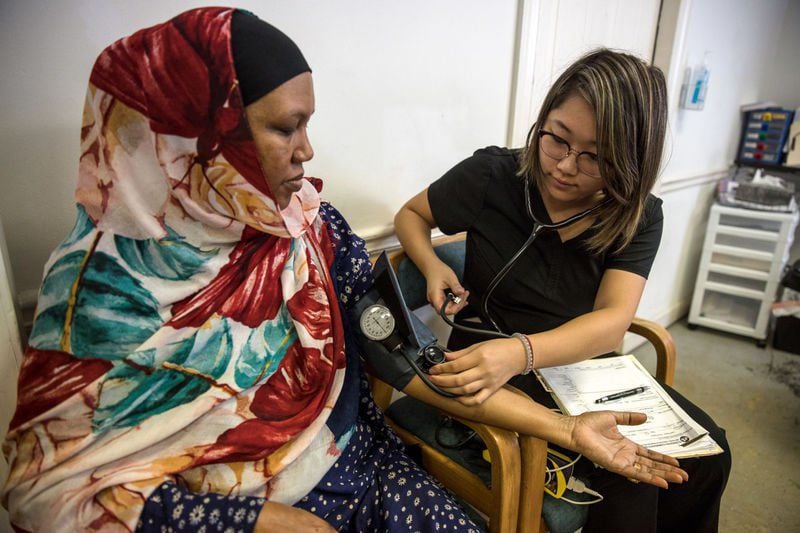 Riley Bunch | The Valdosta Daily Times Rahma Mohamed, 53, has her vitals checked before seeing the doctor at the Clarkston Community Health Center in Clarkston. 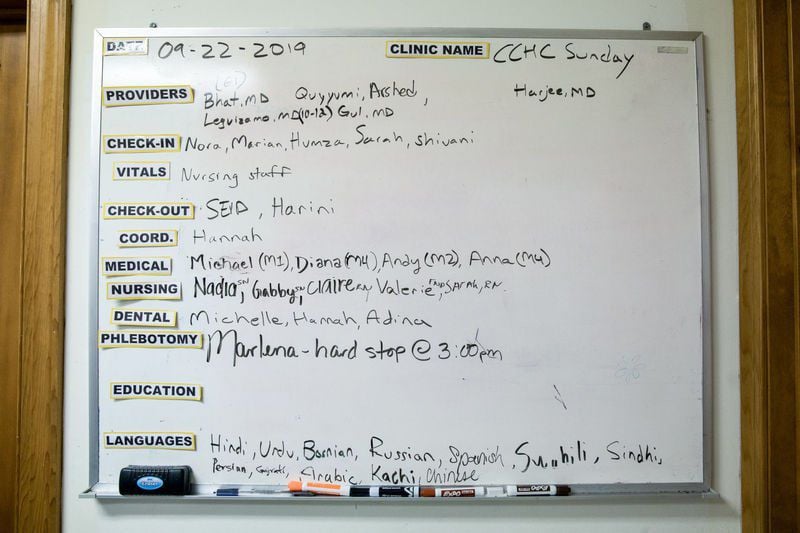 Riley Bunch | The Valdosta Daily TimesCombining all the volunteers that day at the Clarkston Community Health Center, the clinic could accommodate 12 different languages in Clarkston. 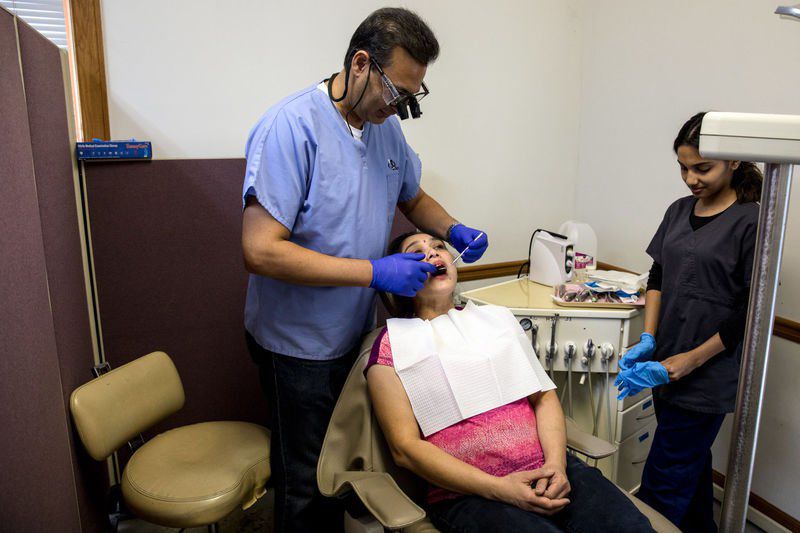 Riley Bunch | The Valdosta Daily Times Rahma Mohamed, 53, has her vitals checked before seeing the doctor at the Clarkston Community Health Center in Clarkston.

Riley Bunch | The Valdosta Daily TimesCombining all the volunteers that day at the Clarkston Community Health Center, the clinic could accommodate 12 different languages in Clarkston.

CLARKSTON — By 8 a.m. Sunday, a line is already starting to form outside of the Clarkston Community Health Center, two hours before it opens.

By 10 a.m. more than 100 people are seated shoulder-to-shoulder in the small facility, waiting for medical treatment. Nurses crouch beside patients and take their vital signs while doctors review charts in corners. It’s a normal weekend for the health clinic — the most comprehensive free medical center in Georgia — which provides everything from dental work to insulin shots.

Georgia has one of the highest uninsured populations in the nation, and it is taking its toll on public health clinics.

In the past four years, the Clarkston clinic has served 4,092 patients. Within the clinic’s zip code, there is a 35 percent poverty rate.

“We serve marginalized communities and people who were born in the United States but live in poverty,” Dr. Gulshan Harjee, co-founder of the clinic, said. “A lot of unemployment, a lot of poverty in this zip code.”

Recently released U.S. Census Bureau data ranked Georgia as the state with the third highest uninsured population in the country. While the percentage rose just slightly, up from last year, to 13.7 percent, it lost ground to other states.

Clinics and health-care advocates agree the new data lines up with the increase in demand for free services they’ve seen in Georgia communities.

Laura Colbert, executive director for advocacy group Georgians for a Healthy Future, said she is not surprised by the numbers.

“We have seen some indications that people have been losing or dropping their coverage over the last year or so,” Colbert told CNHI, “so the number confirmed what we thought had been happening.”

Falling through the cracks

Rahma Mohamed, 53, is uninsured and has lived in Clarkston and visited the health center for three years. Without the clinic, she said, she would not be able to afford medical care.

The clinic easily sees 10 new patients on Sundays — the busiest day of the week — adding to the constantly growing patient pool. More than 400 volunteers keep the clinic running, with patients filing in and out.

“Our numbers are constantly increasing, which tells the story of how broken our health care system is,” Harjee said. “As a state, we chose not to expand Medicaid, that is one source, and Obamacare continues to have challenges.”

Colbert said although Georgia has sat between being rated the fifth and third state for highest rates of uninsured during the past few years, the state does not seem to be gaining much headway in addressing the lagging access to health care.

“Frankly, it’s time for our decision makers to do as much as they can possibly do to move Georgia forward on the health care front,” she said.

Georgia is one of 14 states that hasn’t expanded Medicaid under the 2012 Affordable Care Act for full federal funding. In March, Gov. Brian Kemp signed the Patients First Act, allowing the state to pursue a Medicaid waiver with less flexibility than federal plans.

According to the Associated Press, the waiver would allow proposed legislation to cap eligibility for any expansion to those at or below the federal poverty line — limiting Georgians who could be covered.

The plan was widely opposed by Democrats who said it would cost more to cover less people. Kemp defended the waiver by saying it would lower insurance premiums and improve “access to quality care.”

Colbert said her organization hopes there are other discussions taking place in the governor’s office regarding the Patients First Act, including increased outreach with details of the benefits of and how to become insured. Many residents who may be eligible for financial help, she said, may not know they are eligible.

For now, Saeed Raees, clinic co-founder, stores extra ultrasound machines, exam tables and even a panoramic x-ray machine in his basement. With the space limitations of the clinic, the donated equipment cannot fit and goes unused by patients.

“There are a lot of people who fall through the cracks: who do not qualify for regular Medicaid, do not make enough money to get it from an insurance company and do not qualify for Obamacare to get subsidies,” Raees said. “A majority of our patients are those.”

The clinic is fundraising in hopes of bringing in $1 million to move into or build a new facility. So far it has reached more than half of the goal — but is still $400,000 short.

Until then, Mohamed is prepared to wait each time that she visits the clinic for medical services — sometimes all day.

“That’s the thing, the place is small with a lot of people,” she said, “so you have to be patient.”

The Clarkston Community Health Center sits in a location that unnerves many of its visitors — nearby the police station on one corner and the mayor’s office on another.

“(Patients) are very scared when they come here,” Harjee said. “But one thing we don’t ask is if they are documented or undocumented. All we want is some document that shows their income status, the rest is not a worry at all.”

Harjee — like many of the doctors who volunteer at the clinic — is an immigrant herself. She fled her home country of Tanzania at the age of 18. In 2016, on the day of the last general election, she decided to give up her private practice of 33 years to open the clinic to give back to the immigrant and refugee community.

"You do what you have to do," she said, "and for me this is very personal.”

Some health care advocates are drawing a link between the national increase in the uninsured population to fears regarding current federal immigration policies. The U.S. Census Bureau reported that nationally, the number of uninsured in the U.S. rose by 1.9 million people in 2018. The Hispanic population in the U.S. was the only major racial category that saw a significant increase — rising 1.8 percent in 2018.

Colbert agreed it could be a contributing factor to the rising numbers of uninsured.

“Immigration policies of the federal administration that are scaring off immigrant families from signing-up, either themselves for health insurance or their children to the health insurance they are entitled to,” she told CNHI.

The fear may lead some to a choice between medical care and other expenses such as groceries or rent.

“That bill goes straight to their family budget and their pocketbook, Colbert said. “It makes for some really tough choices.”