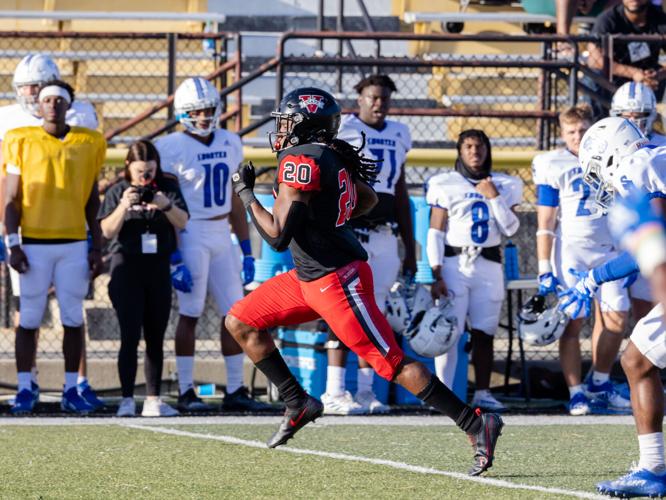 Valdosta State running back Jamar Thompkins (20) rolls 66 yards for a touchdown with 7:30 left in the second quarter against Shorter Saturday at Bazemore-Hyder Stadium. With this run, Thompkins passed former VSU running back Cedric O’Neal to become the all-time leader in career rushing yards. 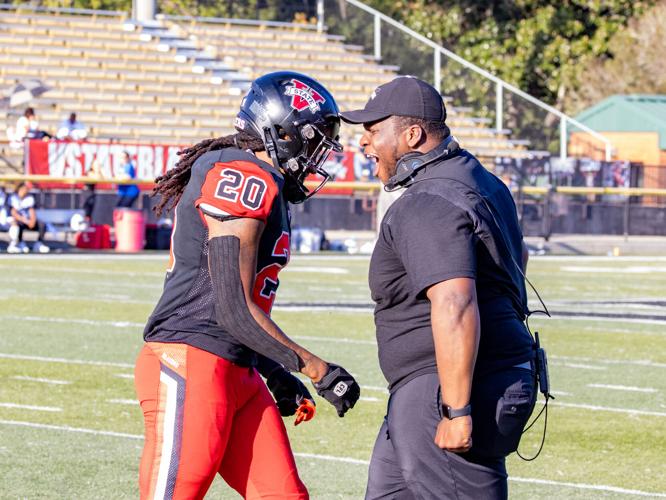 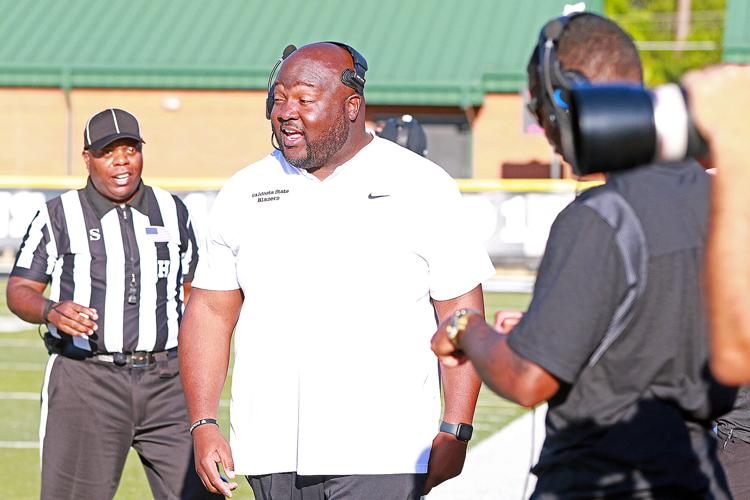 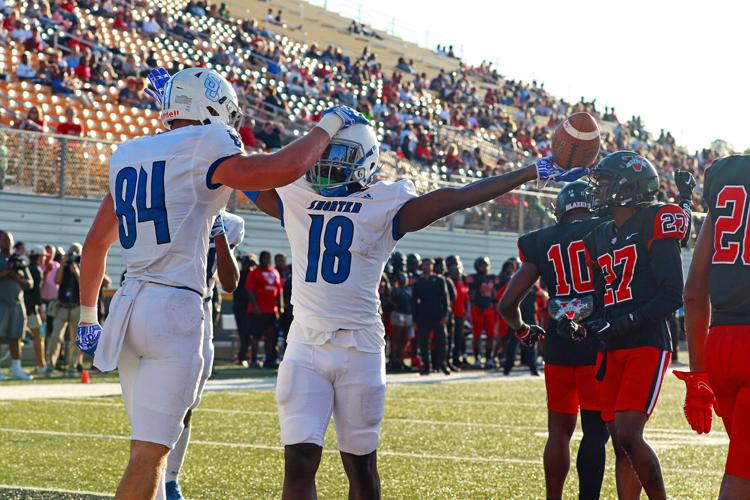 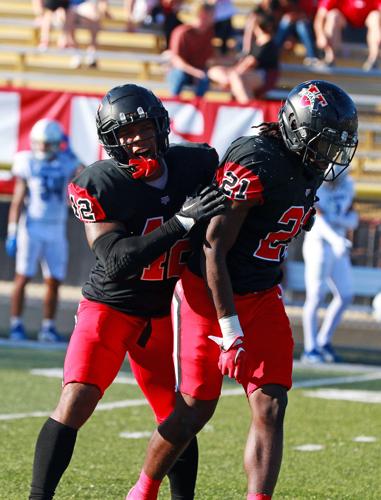 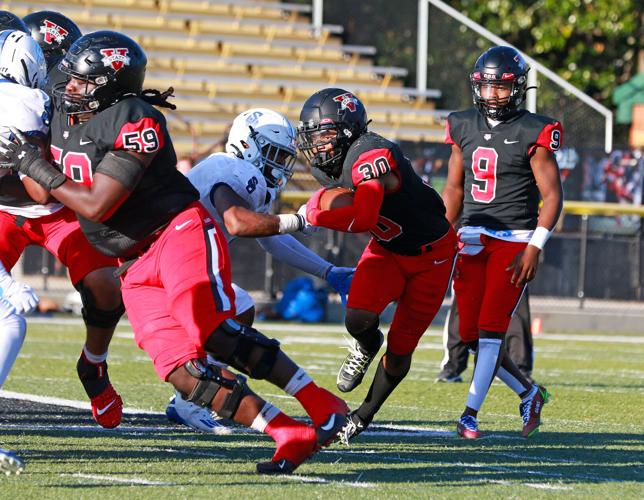 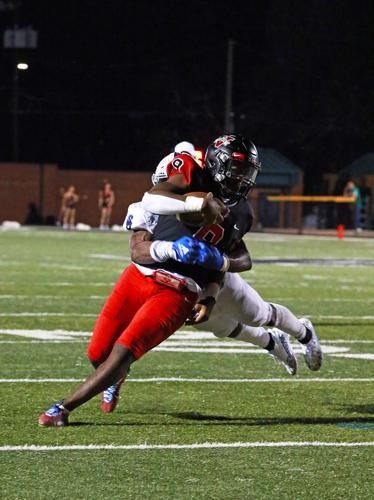 Valdosta State quarterback Ivory Durham (9) tries to. break a tackle by a Shorter defender during the fourth quarter of play Saturday at Bazemore-Hyder Stadium.

Valdosta State running back Jamar Thompkins (20) rolls 66 yards for a touchdown with 7:30 left in the second quarter against Shorter Saturday at Bazemore-Hyder Stadium. With this run, Thompkins passed former VSU running back Cedric O’Neal to become the all-time leader in career rushing yards.

Valdosta State quarterback Ivory Durham (9) tries to. break a tackle by a Shorter defender during the fourth quarter of play Saturday at Bazemore-Hyder Stadium.

A product of Coral Gables High School, just 5 minutes from his hometown of Miami, Thompkins was given a crown after the game – accepting his coronation as the new king of running backs at Valdosta State.

“It means I’m the greatest,” Thompkins said when asked what the record means to him. “It’s what I’ve been working for since I got here. When I got here, they gave me a list of things I should accomplish while I’m here, so that was the last thing that was on the list and I’m happy to get it crossed off.”

As a nod to O’Neal, Thompkins wore O’Neal’s No. 7 jersey all week in practice. After breaking the career rushing record, Thompkins revealed he has not spoken to O’Neal yet, but welcomes the interaction whenever it comes.

Like his career began, Thompkins gets to end his Blazer career with a win. It was an emotional scene as Thompkins and 24 other seniors played their final games in the red and black.

“For me and the guys, it was very emotional because we came in winners and we wanted to go out winners,” Thompkins said. “Now we’re leaving a good taste in the underclassmen’s mouths so they can keep it going.”

Sophomore Estin Thiele’s 25-yard field goal with 1:31 remaining ended up being the game-winner as the Blazers’ defense came up with two key stops that not only helped them take the lead, but allowed them to ice the game late.

“The last 10 quarters of football, I feel like we’ve played better. We played with more enthusiasm,” VSU head coach Tremaine Jackson said. “We started extremely slow tonight, which we hadn’t done that in a while but the level of fight has been there for the last 10 quarters.

“This football team has been through a lot. A lot of people don’t know what we’ve been through. We’ve been through a lot, man. These kids have been through a lot of changes and yet they stayed and they fought, so it doesn’t surprise me that they fight because they’ve been fighting through their whole career, especially this senior class. It was really an all-around effort tonight. We’re really excited about where that puts us going into the offseason.”

First, trailing 28-27 with 7:27 left, the Blazers saw the Hawks push to get a first down in the span of two plays before stopping Devin Brown and Tyrell Owens for short gains and forcing a three-and-out as Terrell Dudley brought pressure on Harold Cook and forced an incomplete pass intended for Brown.

Defensively, the Blazers were led by Dudley’s 10 total tackles. Phillip Starks added seven total tackles and 1.5 sacks on the night while Ravarius Rivers and La’Ken Nettles finished with six stops each.

Taking over with 4:10 left, senior quarterback Ivory Durham led the game-winning drive as he hit B.K Smith for 30 yards on first down then handed off to Thompkins, who reeled off 12 more yards down to the Shorter 28. Durham called his own number and sprinted 17 yards before being knocked out of bounds deep into the red zone at the Shorter 11.

After short runs by Durham and Thompkins, the Blazers went for the end zone to senior Victor Talley, but the pass was broken up – setting up Thiele’s go-ahead field goal.

On the final drive, the Blazers protected the lead by holding the Hawks to eight yards on the final drive – forcing three straight incompletions from Cook to seal the victory.

Cook completed 14 of 34 passes for 185 yards and two touchdowns while being sacked twice in the loss. The Hawks were 2 for 2 on fourth-down conversions until the final drive.

“That was a big fourth down, fourth-and-2. We were just here a week ago on fourth-and-3 and couldn’t get off the field,” Jackson said. “I don’t care who you’re playing or what level they’re at, 2 yards is 2 yards everywhere in America. We were able to be combative in coverage and get off the field, we got a big hit on the quarterback right there at the end and man, it was a really good night for us.

“In spite of what’s happening, we were able to play defense. That’s what we want to be. We don’t want to be bend, don’t break. We want to go out and know we can get a stop when we need to get stop. That was big for our defense, our defensive staff, our defensive personnel to know that we could get stops. We got a lot of stops tonight. There’s been some nights where we didn’t get any stops, so we know what that feels like too. We’re really excited about the direction they’re going because a lot of those guys are coming back.”

The Blazers finished with 439 total yards while the defense held the Hawks to 319 and 134 yards rushing.

“It was a special day,” Durham said of his last game in a Blazer uniform. “Fans, family came out so it was just special. Now we can be legendary for what we did here and hopefully the next team can continue that legacy. That’s all we want.”

True freshman wide out Ted Hurst led the team with six catches for 105 yards, including a 34-yard touchdown pass from Durham that put VSU ahead 27-21 with 10:58 left in the game.

Brown had a productive night for Shorter with 19 carries for 102 yards with a rushing touchdown and a receiving touchdown in the game.

The Blazers led 17-14 at the half as the Hawks managed to cut into the lead with a 13-yard hookup from Cook to John Dickerson IV with 31 seconds to go before halftime.

Like in the first matchup against the Hawks in late September, the Blazers started slow – giving up an early 4-yard touchdown run to Cook to go down 7-0 early.

The Blazers responded with a lengthy drive of 12 plays for 53 yards, and though they couldn’t punch it in for a touchdown, Thiele was true on a 36-yard field goal to make it 7-3 with 4:34 to go in the opening quarter.

After getting the Hawks’ offense off the field, the Blazers took their first lead on a 1-yard dive from Seth McGill – a quick 4-play, 57-yard drive to go up 10-7 with 23 seconds left in the first quarter.

Though the Blazers finish with a losing record for the first time since 1999, they finished the season with encouraging performances with two wins and an overtime loss to GSC champion West Florida last week sandwiched in between.

Saturday’s win over Shorter was also the second home win of the season. The Blazers came back to defeat Keiser in Week 1 before dropping home games to Virginia Union, West Alabama, Mississippi College and West Florida.

In a season where not much went right for the 2021 national championship runner-ups, the Blazers ended the season the way it started – with a win.

“We always talk about, people remember the first and they remember the last,” Jackson said of the team’s second home win of the season. “They remember the first win because they told me I didn’t win by enough, and they definitely remember this one. We’ll send our fans off, our players, us as coaches – we will end on a win. It’s much better than having to sit in a loss for a year before you can touch the field.”