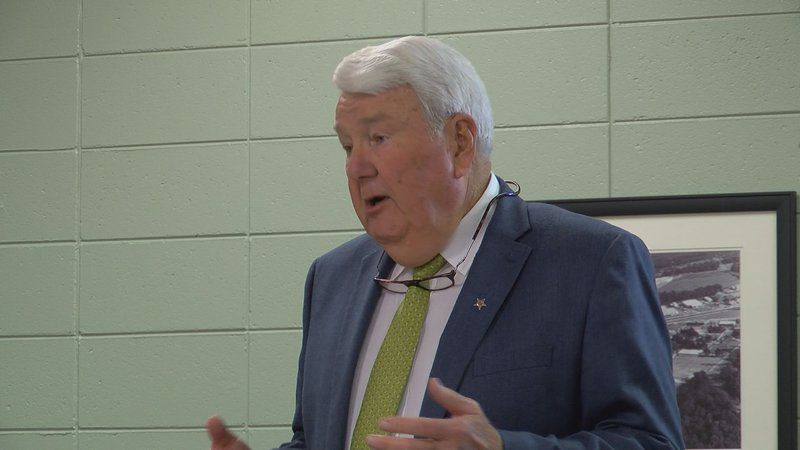 Ashlyn Becton/WALB-TVThomas County Sheriff Carlton Powell talks to the Thomas County Board of Education about the proposal for more school resource officers. 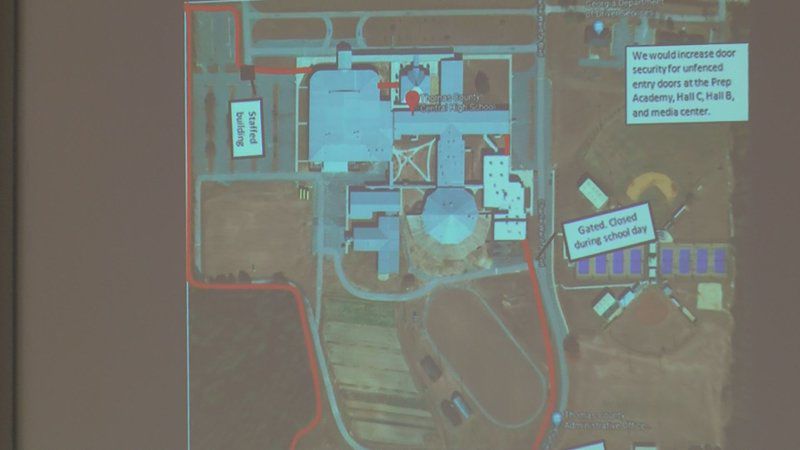 Ashlyn Becton/WALB-TVThis drawing shows where a fence would be installed around the Thomas County Central High School campus.

Ashlyn Becton/WALB-TVThomas County Sheriff Carlton Powell talks to the Thomas County Board of Education about the proposal for more school resource officers.

Ashlyn Becton/WALB-TVThis drawing shows where a fence would be installed around the Thomas County Central High School campus.

THOMASVILLE — Thomas County School leaders are hoping to be proactive, ramping up security measures in the school amidst the numerous school shootings across the nation this year.

Sheriff Carlton Powell addressed the Thomas County School Board of Education at a called meeting and workshop Tuesday night.

His proposal for the BOE is to put five additional school resource officers at the schools, making eight officers total with the three already in place.

• Two at the high school

• Two at the middle school

• One at Bishop Hall and the administrative campus

• One at each elementary school (Hand-in-Hand, Garrison-Pilcher, and Cross Creek).

Right now, the county schools pay $144,531 for three SROs nine months out of the year. The county commission pays for the other three months.

An increase to eight officers would cost $385,416 for nine months.

“I know that sounds like a lot of money, but that’s kind of the world we are in today,” Powell said.

That funding covers the officers pay.

The county pays for training, equipment and vehicles.

“I think the days are long past when we can put people in less than the best shape as our school resource officers,” Powell said.

On a national level there has been a lot of talk about arming teachers, Powell said that is a decision that needs to be made locally by the school board.

Jones said a lot has changed since he served as a SRO in the county school system.

“It’s evolved quite a bit,” Jones said. “The first few years I taught there we had no gun belt, period, and then along came April 20, 1999, the Columbine incident.”

Capt. Chuck McDonald said the placement of the eight SROs could be flexible.

McDonald added that because of recent school shootings nationwide he supports the addition of the officers.

“The world has changed,” he said. “The world we live in is not the world we grew up in. We have to change with it, and unfortunately, to protect our children and grandchildren, this is where we are at.”

TCSO officials said mental health is also a big concern in the schools, adding that there are 15 licensed homes housing patients with mental issues but there are many such patients not in a facility.

Jones said the department recently had an incident where someone with a known mental health history wandered near the high school campus.

“The Sandy Hook shooting was a person with a mental health condition. Parkland, Florida was a mental health case,” Jones said. “Not only are these people in our community but they are in our schools. I cannot state enough to you how vulnerable we are in the State of Georgia.”

During the workshop, Scott James, assistant superintendent for student services, spoke about current and planned security measures in the schools.

“A lot of this stems from meetings I had with each school administration following the Parkland shooting,” James said.

There are established procedures for visitors on every campus.

There are security doors at Garrison-Pilcher, Cross Creek, TCMS, and Renaissance Center.

The county schools also have robust camera systems at all the schools.

During public events, the schools increase security as well.

James mentioned that the schools all have at least one Georgia Pines mental health professional on campus.

Chromebooks are widely used by students in the county schools. There are five programs used by the school system to monitor the activity on the school issued computers while students are on campus and off campus.

“I think we have a very robust system to monitor the technology our system is using,” said James.

Garrison-Pilcher is up for a big renovation in 2019. During that time James said security enhancements will be added.

Several additional cameras will be added at every school in the near future.

There have been meetings held recently to generate ideas and concerns from school administrators about things the school system can implement.

Some of those ideas include improved radio communication, supplemental security for classroom doors and restricting drivable access to campuses.

“For instance, a wedge to put down by the door, or a motion device, a bar that goes across the door, something like that,” said James.

Fencing around the campus also has been talked about, specifically at the high school campus.

“Right now we are looking at an initial sketch (of fencing) around the high school and what it may look like,” James said.

Driveways would be gated around the school and door security would be increased for areas unfenced such as entry doors at the prep academy, hall c, hall b, and the media center.

All of these security enhancement plans and feasibility studies for additional resource officers are under review by the board of education and will be talked about further as they plan the FY19 budget.

WALB-TV is a Raycom News partner of the Thomasville Times-Enterprise.