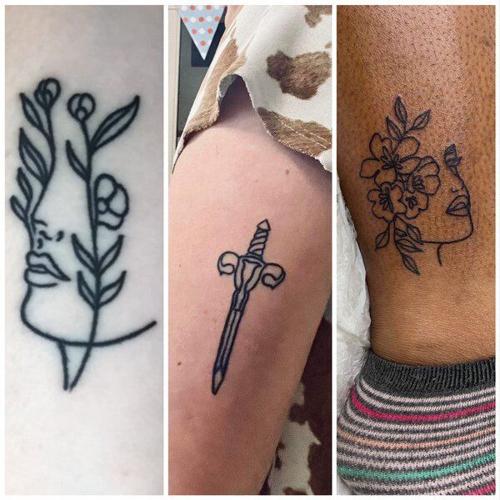 Malia Thomas | The Valdosta Daily Times Cassie Banks, Sophie Rebholz and Jaylah Thomas each got a tattoo to symbolize their passion and support for the 'My Body, My Choice' movement. 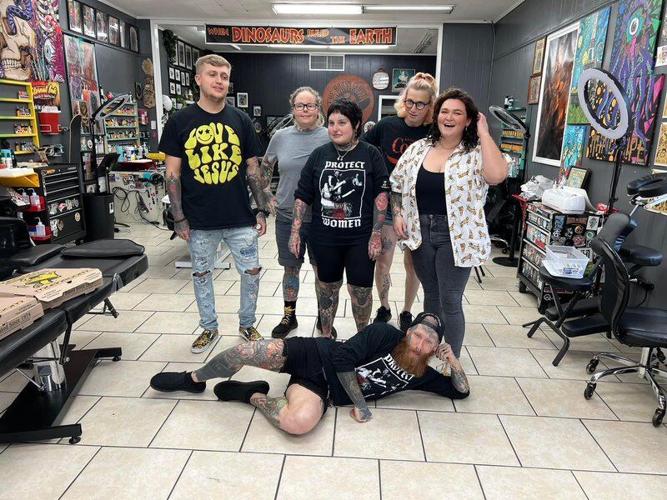 Ben Stubbs | Submitted Photo The Brass Quill Gallery staff members said they were honored to make a difference as a part of the nationwide tattoo flash.

Malia Thomas | The Valdosta Daily Times Cassie Banks, Sophie Rebholz and Jaylah Thomas each got a tattoo to symbolize their passion and support for the 'My Body, My Choice' movement.

Ben Stubbs | Submitted Photo The Brass Quill Gallery staff members said they were honored to make a difference as a part of the nationwide tattoo flash.

VALDOSTA – For some South Georgia residents, nothing exemplified their “My Body, My Choice” stance more than getting a permanent seal of solidarity on their skin.

The Brass Quill Gallery decided to participate in the My Body My Choice Tattoo Flash event last week originally organized by Buffalo, New York, tattoo artist Krista Reid on behalf of the National Network of Abortion Funds. The shop raised $4,009, all of which was donated to the NNAF.

Tattoo artist Ben Stubbs said he chose to do the flash event due to the recent overturning of Roe v. Wade and wanting to give people an artistic outlet for their frustrations.

“She (Reid) asked us if we wanted to be a part of it, and our beliefs were aligned with hers, so we decided to go for it,” he said.

Stubbs confirmed the shop had completed approximately 130 tattoos and they had garnered an overwhelmingly positive reception.

“We had a lot of people who ended up not getting tattooed who still donated money which was, like, a surprise. There’s so many selfless people who gave us the $30 fee and expected nothing in return,” he said.

Sophie Rebholz got a tattoo of a sword inked by Ansley Stubbs. Rebholz said she didn’t mind the wait and admired The Brass Quill being proactive in fighting for “what’s right.”

“My tattoo is a reminder to fight. I am an immigrant woman who moved here expecting to be free to live my life how I want to (within reason), and now my basic human rights are being stolen," she said. "My sword reminds me to keep fighting, marching, protesting and voting to protect myself, my peers and every person in the country.

“I am passionate about the cause because I think it’s important to have a say over what happens to my body. I have a child and I do not want more. Not only can my family not support a second child but I had a traumatic delivery and don’t want to experience that again. Should we be in a position to expand our family again, I know I want to take the fostering/adoption route because children in the system are always used for clout but are ignored the rest of the time. I care about them, and if I can change one of their lives, that’s one life changed.”

Cassie Banks, a Douglas native who had her work done by Kelly Stubbs, said she had wanted a tattoo for a while, and decided to get one to support NNAF’s cause.

“This tattoo represents a lot to me. From doing what I can to help a friend reach her goals of getting an organization off the ground, and being there for her large protest, it’s also for me,” she said.

“This tattoo is to remind me of a time our government failed us but also to remind myself that I’m in a growing period. To be patient and kind to myself and others. That change may take time. The change I want to see in myself and the world around me. So there’s a lot of good things that I’m very proud of associated with my tattoo.”

Valdosta State University student Jaylah Thomas, who had her work done by Ty Bowen, said she’s passionate about helping NNAF because it's important to “display advocacy and awareness to the threatening decision of regulating someone's reproductive organs.”

“I wanted to get a tattoo because the proceeds went to the National Network of Abortion Funds. So with me wanting a permanent reminder of the work I've been putting in since Roe v. Wade, there was no second thought about me participating in the flash event. In a way, it reminds me of divine femininity. It also ties into the “My Body, My Choice” movement,” she said.