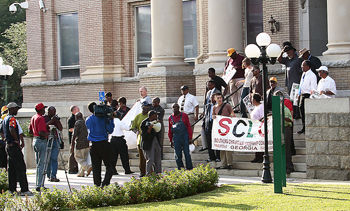 Members of the Southern Christian Leadership Conference gather on the steps of the Lowndes County Courthouse Friday after a march from St Paul AME Church Friday. 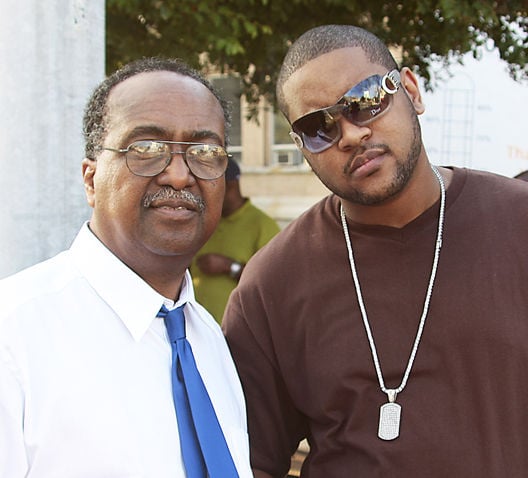 Members of the Southern Christian Leadership Conference gather on the steps of the Lowndes County Courthouse Friday after a march from St Paul AME Church Friday.

VALDOSTA — Igniting civic responsibility among today’s youth and among those who fought for basic civil freedoms in the past are two of the main goals of the Southern Christian Leadership Conference. “Civic involvement is the key to change.” That is the message the SCLC’s Georgia State Unit is bringing to Valdosta this weekend with its first three-day convention. The event, being held at The Wingate Hotel, kicked off Friday with various activities including a luncheon with SCLC National President and Chief Executive Officer Dr. Charles Steele. The convention will be host to a variety of events, including forums on SCLC chapter development, workshops on voter registration and an awards banquet. Georgia SCLC President Rev. Samuel Mosteller said that the purpose of the convention is to bring the idea of a government for the people and by the people back to the people. While paraphrasing President Abraham Lincoln, Mosteller said that in this day and age it seems as if the government is more prone to answer to the whims of the media and big corporations rather than the people it is supposed to provide for. “Our communities are fractured. Our schools are fractured,” Mosteller said. At one time, these outlets provided a place for intellectual growth and stability. Now it is the obligation and duty of civic organizations like the SCLC to step in and help those who are suffering from a fractured society, he said. “We are here to be a surrogate family, to fill in and help that single mother, single father and other families that are suffering,” Mosteller said. Rebuilding hope with people from all walks of life, nationalities and religions and showing that they can have a voice through the SCLC is what the national and state chapters hope to achieve. Steele said the continued civic service of the SCLC lies within the recruitment and involvement of today’s youth. “If you don’t have young folks, it becomes not the fact that your are dying but that you are already dead,” Steele said. At a recent hip hop rally at Auburn University, Steele met multi-platinum music producer Khao, and the two struck up an unlikely cross-generational friendship that has spawned a SCLC voter movement and a song. Khao said that Steele’s speech at Auburn struck a chord when the first thing the president did was apologize to Khao’s generation for Steele’s generation failing to keep them civicly involved. “Million March 2 Vote” is a movement to register one million people to vote before the November election. Coinciding with the program, Steele and Khao recorded a track entitled “Bridge Da Gap.” Steele said the importance of music within the SCLC and the civil rights movement is not something realized in today’s recollections of Dr. Martin Luther King Jr.’s original rallies and marches. The music played a pivotal role in bringing young people in, Steele said, and was one of the major reasons he got involved at the age of 15. Much of the messages reaching today’s youth comes through the music they are listening to. An important resource the SCLC is striving to tap back into, Steele said. Friday afternoon, the convention held a march and rally. Tonight at the Wingate Hotel guest speaker and former King staff member Dr. C.T. Vivian will speak during the convention’s banquet. At the banquet, two local residents will be honored with awards. Dr. Rhonda Cross-Scott will receive the Richard Turner Direct Action Award, while the Rev. Dr. Floyd Rose, president of the SCLC’s Valdosta chapter, will receive the Pioneer Award. Sunday, Dr. Glenda F. Miller will close out the convention with a morning service. To hear Steele and Khao’s song, go to www.millionmarchtovote.com or to myspace.com/millionmarchtovote.