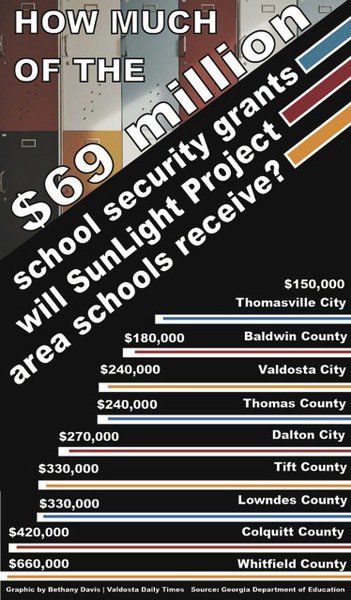 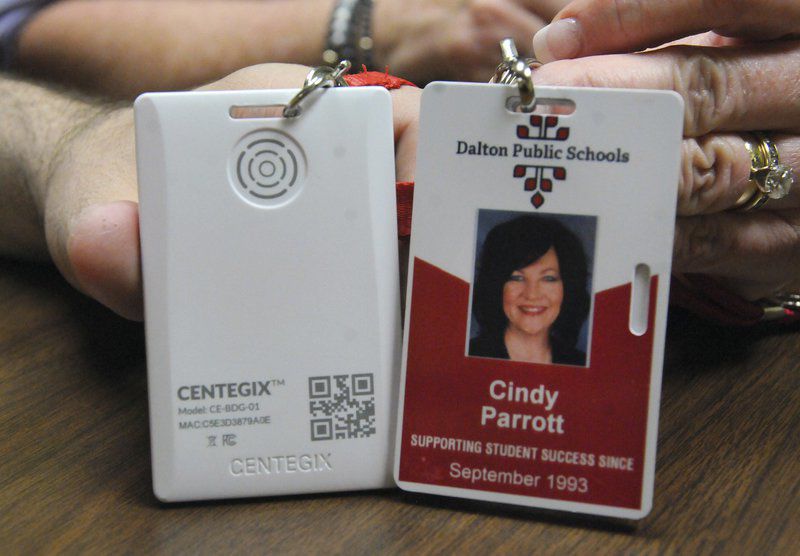 Chris Whitfield | The Dalton Daily Citizen-NewsCloseups of the new crisis alert notification badges that are part of a pilot program at Roan School in Dalton. 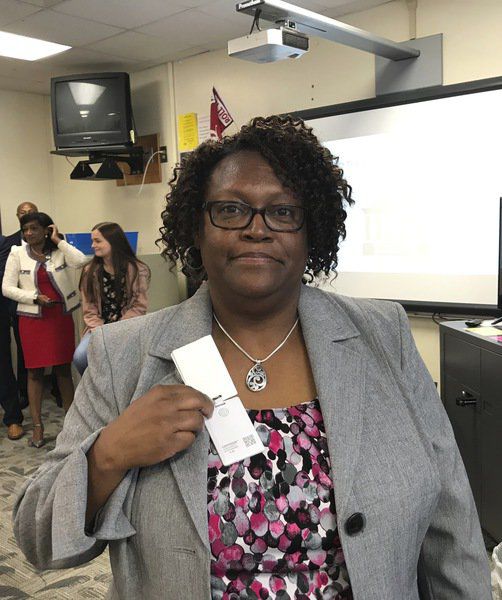 Jill Nolin | The Valdosta Daily TimesNicole Watson, principal of Chapel Hill High School in Douglasville, shows a card that enables her to initiate the school’s lockdown procedure by pressing a button. Her district purchased the lockdown system with state security grant funds. 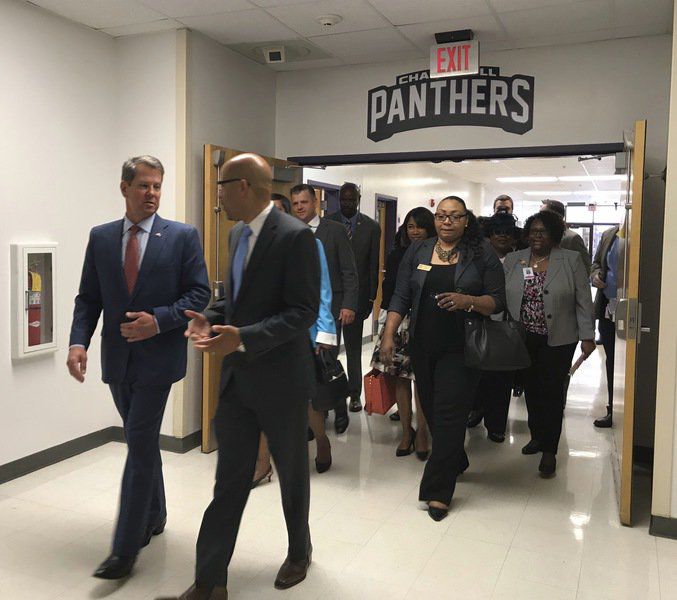 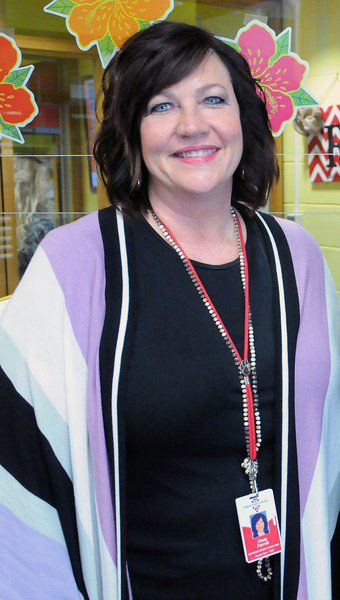 Chris Whitfield | The Dalton Daily Citizen-NewsCloseups of the new crisis alert notification badges that are part of a pilot program at Roan School in Dalton.

Jill Nolin | The Valdosta Daily TimesNicole Watson, principal of Chapel Hill High School in Douglasville, shows a card that enables her to initiate the school’s lockdown procedure by pressing a button. Her district purchased the lockdown system with state security grant funds.

DOUGLASVILLE – The door was locked and lights turned off. Students stopped their work and huddled together on the floor away from the door and windows. A robotic voice filled Chapel Hill High School.

Lockdown drills have become a familiar routine for American students in the age of school shootings, and some, such as this one in Douglasville, are happening with a high-tech twist.

The school principal initiated the school’s lockdown protocol by reaching up to a card dangling from her lapel and hitting a button. Every teacher and administrator has their own card and the ability to do the same, with the crisis alert system able to pinpoint their location.

It’s the kind of locally picked solution Gov. Brian Kemp says he had in mind when he proposed adding $69 million – or $30,000 per school – to the budget for school security grants. Kemp recently highlighted the Douglas County School System’s security upgrades during a press event.

“You all know best how to keep your school safe,” Kemp said at the Douglasville event. “We’re glad to be able to partner in doing that without having some state mandate that you don’t really need to figure this out.”

The district used the $1 million it received from the state to purchase the lockdown system for its three dozen campuses as well as security cameras and a building access system that puts an entry card in the hands of students. Local funds were used to cover some of the cameras.

“This is how I envisioned this working,” Kemp told reporters.

The first-term Republican governor, who campaigned on bolstering school security, visited the Douglasville high school just days after he surprised many by vetoing a measure aimed at improving safety on Georgia’s public school campuses.

The measure would have required schools to conduct mass casualty drills – with or without students present – and undergo regular on-site reviews to identify security vulnerabilities.

But it would have also directed every school principal, or another staffer, to serve as a school safety coordinator – an additional duty that would have required them to report suspected criminal activity to local law enforcement.

This coordinator would have also been tasked with working with state agencies, local law enforcement and providers of mental health and social services.

Rather, Kemp has pointed to the state funding in the budget this year – which was on top of the $16 million approved last year – as a better approach, at least for now.

“That’s the quickest way instead of us implementing some new state program or mandate or requiring the schools to do something,” Kemp told reporters gathered at the Douglasville school. “You can see they’re already doing it here. We just got out of session a couple of weeks ago and this is being implemented already right here in Douglas County.”

Rep. Rick Jasperse, a Republican from Jasper who carried the measure in the House, said he plans to regroup and meet with the governor about his concerns.

Jasperse, who chairs the House Education Committee, said Georgia needs to adopt an overarching strategy for school safety as other states have done.

He said he believes a state mandate may be the only way to ensure everyone is on the same page in Georgia.

“Local control is all OK and fine, but we want to make sure that it’s uniform across the state and that everybody’s treating it as seriously as we need for them to be,” Jasperse said in a recent interview.

The north Georgia lawmaker has a powerful ally in his corner.

“I don’t want this state to try to micromanage schools,” House Speaker David Ralston said. “That’s why we have school boards and local superintendents.

“But I think there are minimum expectations that we could have, certainly as it relates to keeping kids safe once they walk in that building in the morning, keeping the teachers safe and the staff safe. I don’t think that’s asking too much, frankly.”

John Zauner, who heads the Georgia School Superintendents Association, said he does not oppose a state standard, so long as it is thoughtfully written. He described the now-nixed bill as being hastily put together at the last minute.

Particularly troublesome, Zauner said, was a plan to put the responsibility of planning, and reporting potential threats, on the shoulders of a school’s principal or any another school staffer – and to do so without any additional training or resources.

“That’s a huge responsibility,” said Zauner, who is a former U.S. Secret Service agent. “To me, school security should be a shared responsibility between local law enforcement and educators. It’s not the sole responsibility of an educator, and they certainly don’t have the training to deal with a lot of the issues we’re faced with in our society these days.”

Rather than burdening local administrators, Zauner said it makes more sense for that kind of coordination to come from the state level.

‘It very well could happen here’

These missteps in Parkland have been closely watched across the country, including here in Georgia.

“Like everyone, it caused us to really revisit the whole thing,” said Scott James, who is the associate superintendent with Thomas County Schools.

“I think everyone – not just in Thomas County, but around the country – thinks now that it very well could happen here,” James said.

In Thomas County, which sits on the Florida line, that reevaluation prompted a new emphasis on securing the perimeter of the district’s campuses.

Officials developed plans to restrict public access at each school through a combination of fencing and electronic security devices on exterior doors.

Upgrades had already been made at the high school, but James said the $240,000 from the state security grants will help the system tackle more of its district-wide safety plan faster.

The district will use a combination of state and local funds to continue beefing up security along the edges of its campuses. Security cameras upgrades are also in the works.

Across the SunLight Project coverage area of Valdosta, Dalton, Milledgeville, Moultrie, Thomasville and Tifton – and throughout the state – the plans for state dollars are as varied as the more than 2,300 schools benefiting from the cash.

Requests are still coming into the state Department of Education, but the most common so far relate to doors, locks and buzzer systems, as well as video cameras and other types of monitoring devices.

In Dalton, the city school system is looking at a lockdown system similar to the one recently installed at the Douglasville school. The district just piloted the system at an elementary school by the same company, Atlanta-based Centegix, but has issued a request for proposals.

The north Georgia district implemented numerous changes after a teacher locked himself in his classroom and fired a gun at a window in February 2018, causing panic at the school.

The $270,000 from the state will enable the district to speed up security projects, such as upgrading the public address system at some schools and adding or upgrading cameras at others, said Pat Holloway, chief of staff at the district.

“It is vital that students and staff feel safe while at school so that teaching and learning becomes the focus,” Holloway said.

In Valdosta, district officials will hash out a plan on how to spend the money this summer. At this point, upgrades to the surveillance and radio systems seem likely.

Valdosta Superintendent Dr. Todd Cason said state funds are appreciated, but it remains to be seen how far they will go.

“Thirty thousand dollars (per school) sounds like a lot of money but in the big scope of things, once you start buying certain products and items, that money goes fairly quickly,” Cason said.

"Lowndes County Schools is reviewing various options regarding internal and external emergency communications," according to a statement from Lowndes school officials. "At this time, no decision has been made on the platform or the hardware requirements."

In Colquitt County, most of the requests from administrators have been related to camera systems, said Mary Beth Watson, school board chair. The district will receive a total of $420,000 for its 14 campuses.

“The school security grants are a great start,” Watson said, adding she would like to see state funding for school resource officers.