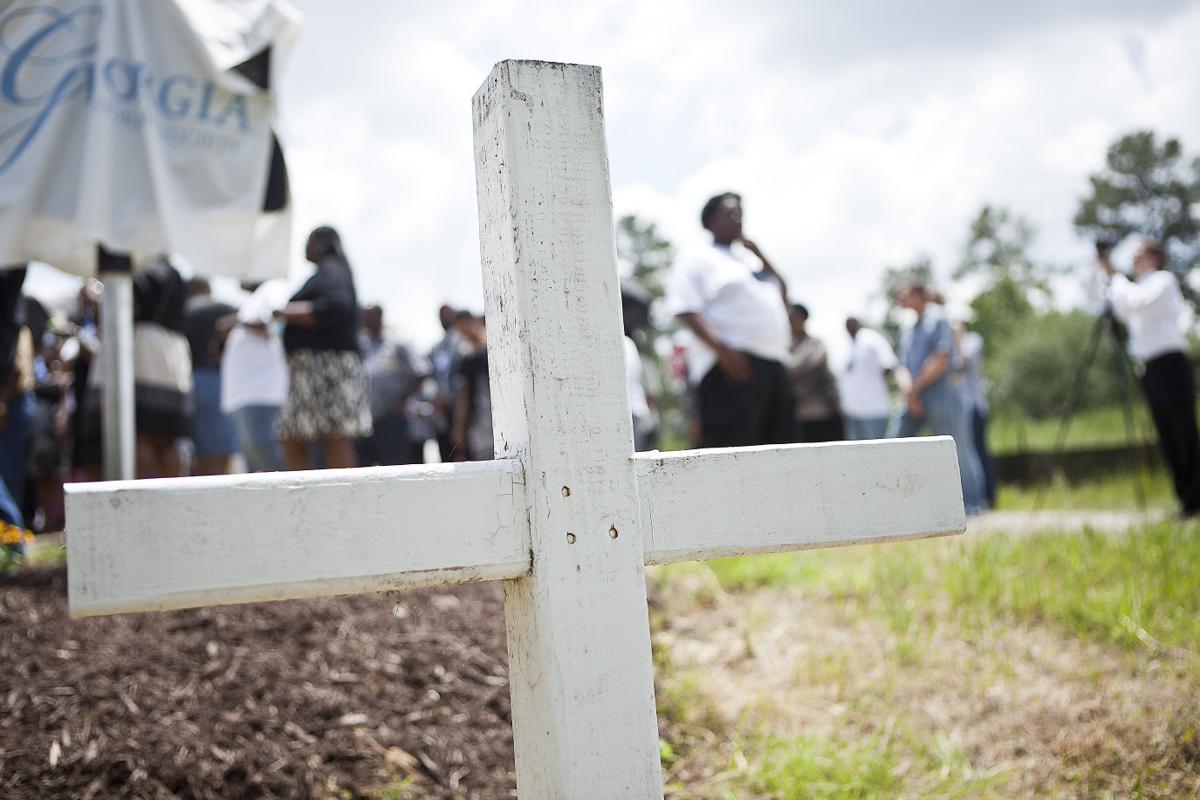 A cross is on display at the marker site for the lynching victims of 1918. 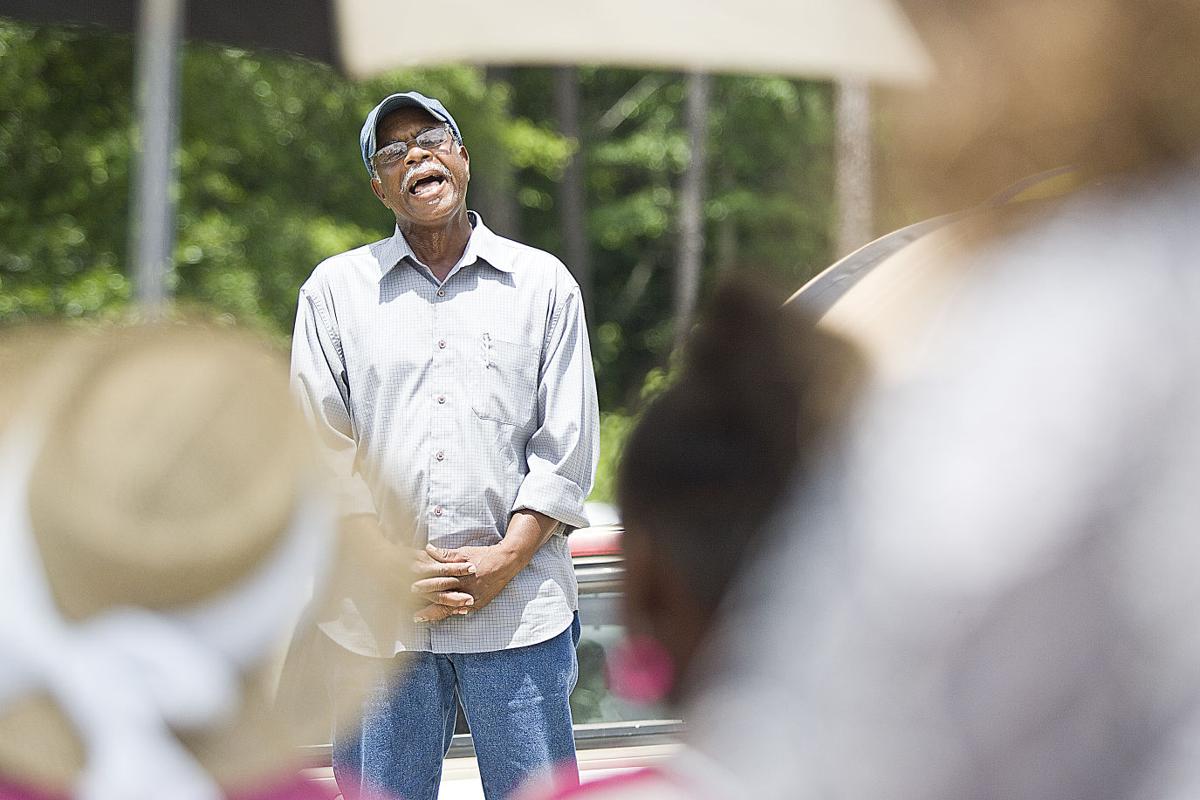 Robert Hall sings a song for Mary Turner and the lynching victims of 1918. 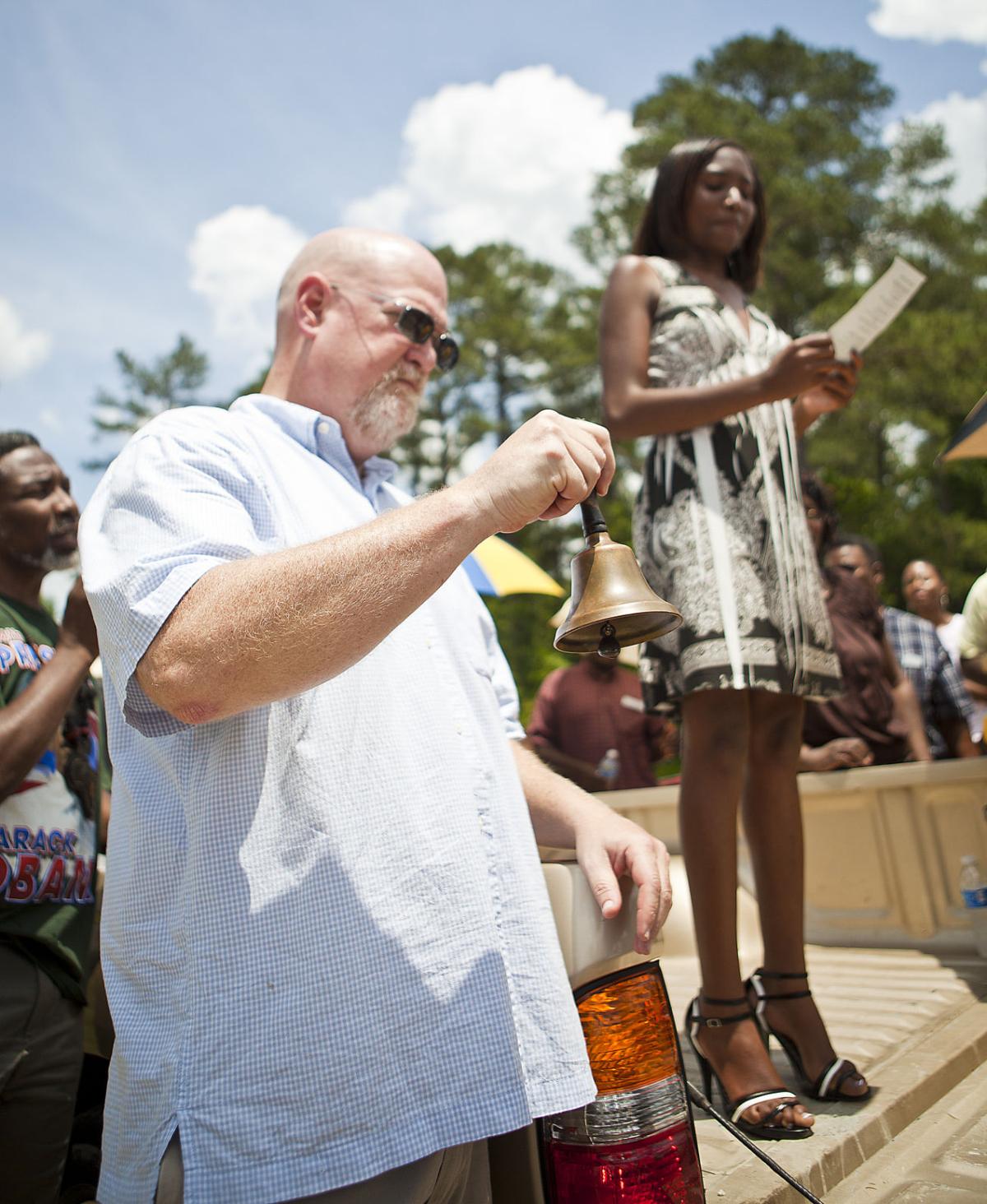 John Rogers rings a bell every time Courtney Woods reads a name of one of the lynching victims of 1918. 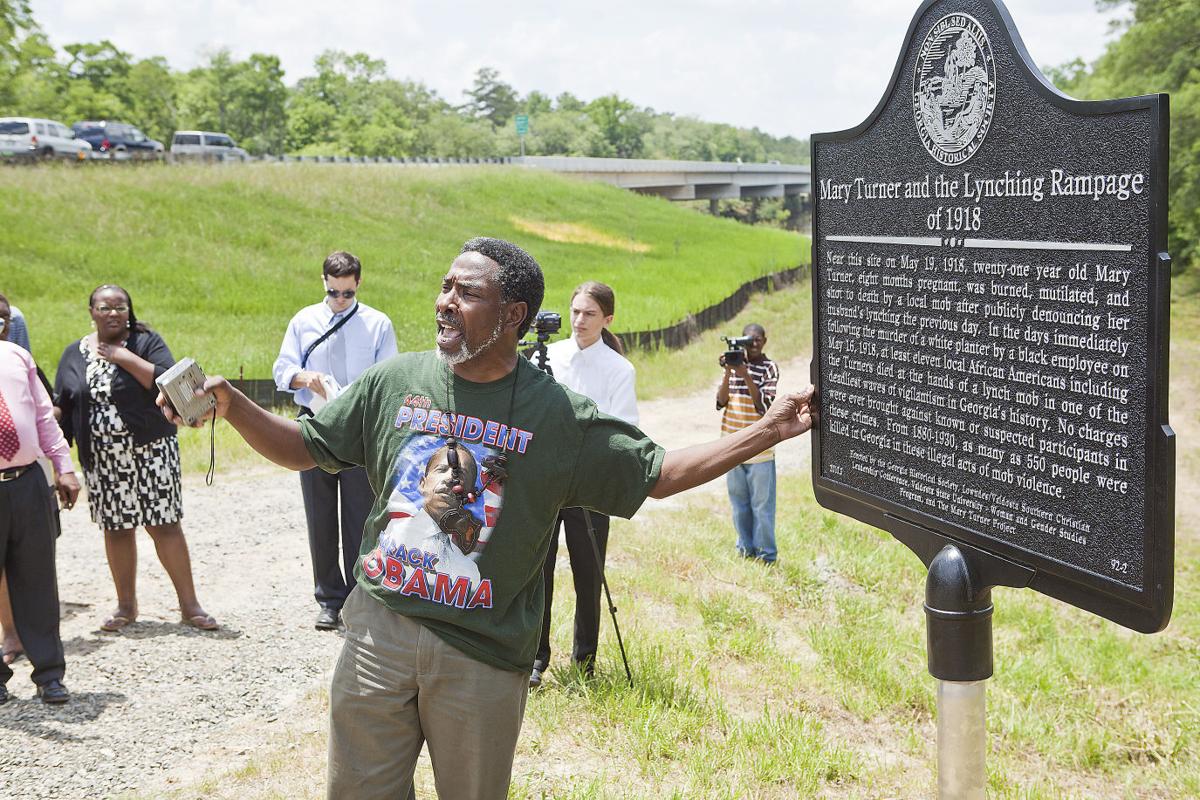 George Rhynes reads out the inscription on the historic marker. 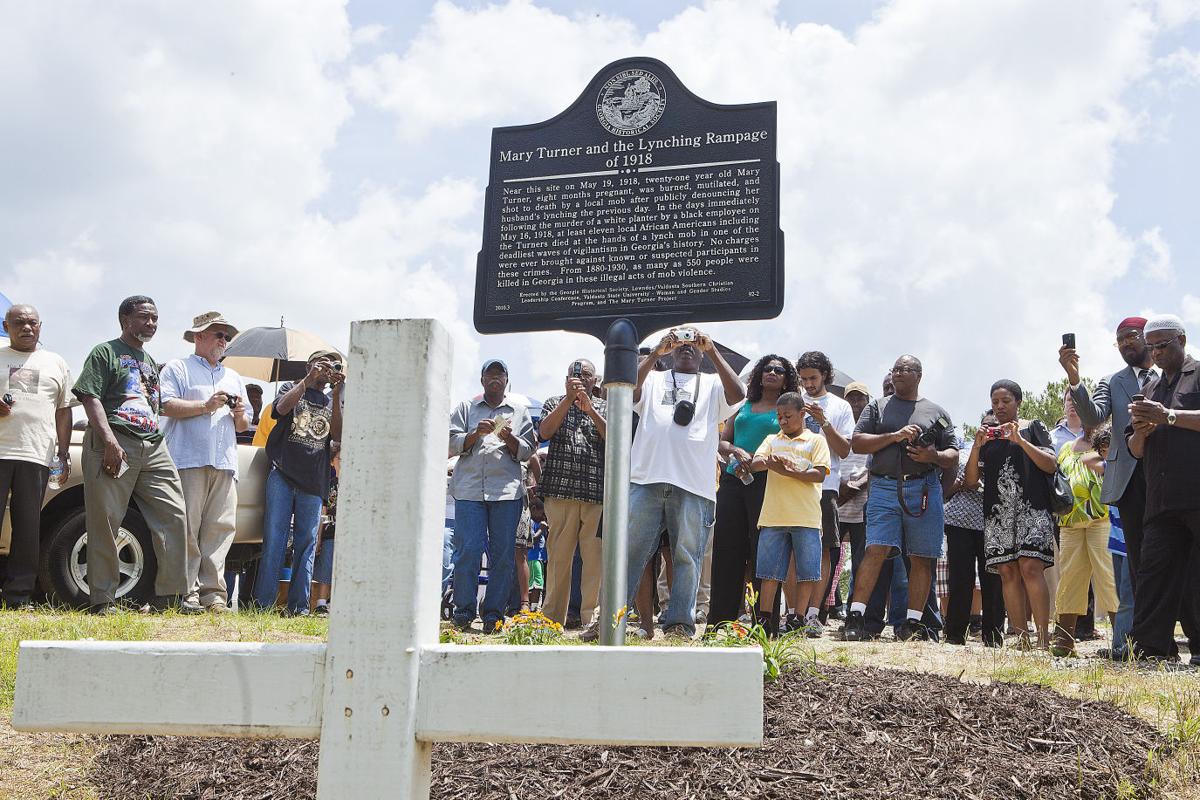 Attendees of the Mary Turner site ceremony take pictures after the unveiling Saturday. 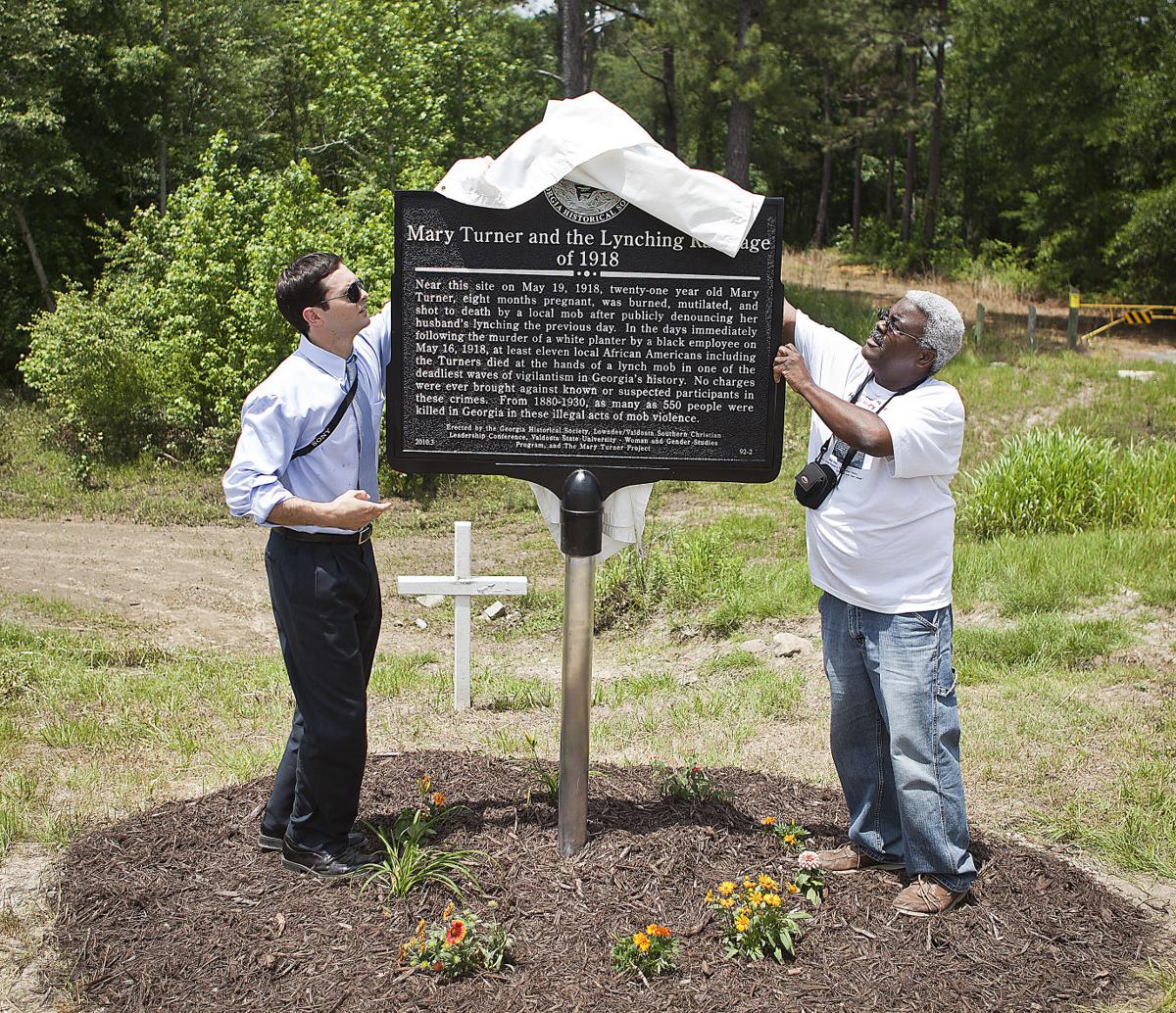 A cross is on display at the marker site for the lynching victims of 1918.

Robert Hall sings a song for Mary Turner and the lynching victims of 1918.

John Rogers rings a bell every time Courtney Woods reads a name of one of the lynching victims of 1918.

George Rhynes reads out the inscription on the historic marker.

Attendees of the Mary Turner site ceremony take pictures after the unveiling Saturday.

More than 40 cars followed a motorcade on Ga. 122, west of Hahira, to the site where Mary Turner was lynched in 1918 to dedicate a historical marker Saturday.

The ceremony opened in song as family members of Mary Turner and members of the community stood side-by-side.

“How proud we are and how honored we are today,”  said Will Hanley, Georgia Historical Society historical marker coordinator. “It is vital that everyone take a vital role in our history ... These stories weren’t told for generations ... (We’re) telling the story and bringing people together.”

While Mary Turner did not receive a proper burial in 1918, the marker will serve as remembrance of what occurred so that future generations have the historical knowledge of the lynching.

“It’s not about demonizing anyone, it’s about knowing the history of our town,” said John Rogers, a member of the Mary Turner Project.

Before the historical maker was unveiled, the lynching victims’ names were read, followed by the ringing of a bell. The lynching victims of 1918 were Will Head, Julius Jones, Hayes Turner, Mary Turner, Eugene Rice, two unidentified persons, Chime Riley, Simon Schuman and Sidney Johnson.

After the historical marker was revealed, everyone remained silent. Strong emotions could be felt throughout the crowd as a reading about the events of 1918 was heard.

The marker, titled “Mary Turner and the Lynching Rampage of 1918,” was installed because of the Southern Christian Leadership Conference (SCLC), Women and Gender Studies Program, The Mary Turner Project, Valdosta State University and the Georgia Historical Society.

“We hope to make it an annual event,” Rogers said. “It’s been great to connect with the family ... they’ve really jumped in there.”

Before unveiling the marker, over 100 people filled the Webb-Miller Community Church, remembering Mary Turner and the past through song, reflection and prayer.

“I lived almost 50 years of my life not knowing the names of my grandmother and grandfather ... We did not speak of these names because of the lynching that took place,” one man said.

The man said his grandfather was “never bitter about what happened” and “joy and celebration were things our grandfather always mentioned”.

“I would like to first thank the people from the Mary Turner Project for all that you have done ... It’s a pleasure to see so many faces in front of the project,” she said. “I see a lot of family members here today. I thank everyone for coming out for us to be with us on this very important occasion.”

History shows that a white Brooks County plantation owner often bailed people out of jail. He then worked them on his land until he considered the bail debt repaid. In 1918, he bailed out a 19-year-old black man who refused to work because he said he was sick. The white man beat the black teen. After the beating, the black teen shot and killed the white plantation owner.

This spurred a “mob-driven manhunt” for the teen and others believed to be involved in the shooting.

“That manhunt lasted for more than a week and resulted in the deaths of at least 13 people, with some historical accounts suggesting a higher number of persons killed,” according to the Mary Turner Project. The historical marker mentions 11 people killed.

Mary Turner and her husband were among this number.

In May 1918, Mary Turner protested the killing of her husband. She was 21 years old and eight months pregnant; previous accounts have suggested she was only 20 years old.

She threatened to swear out warrants, which “enraged locals ... Mary Turner fled for her life only to be caught and taken to a place called Folsom’s Bridge on the Brooks and Lowndes counties’ shared border.”

The mob tied her ankles, hanging her upside down from a tree. They doused her with gasoline, burning away her clothes. They cut her baby from her and killed the unborn child. They riddled Mary Turner’s body with bullets.

She and the baby were buried 10 feet away.