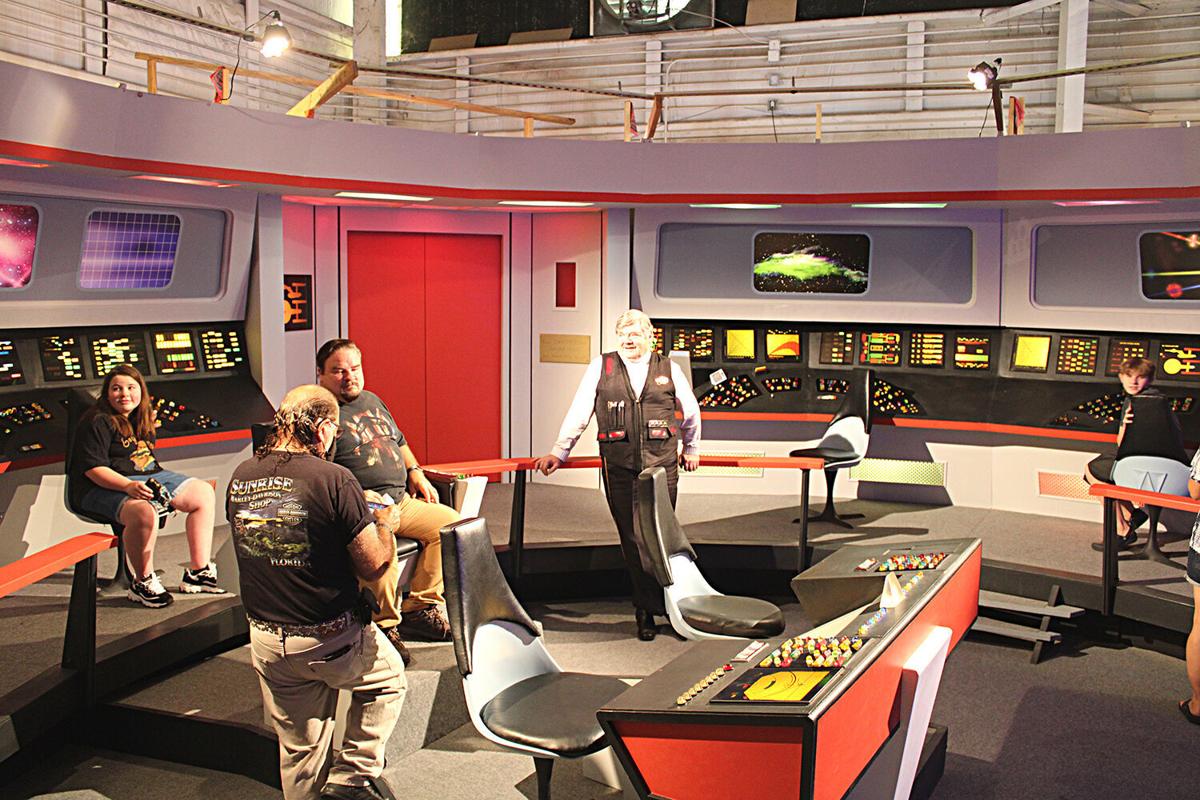 Visitors check out the bridge of the U.S.S. Enterprise at Neutral Zone Studios in Kingsland. 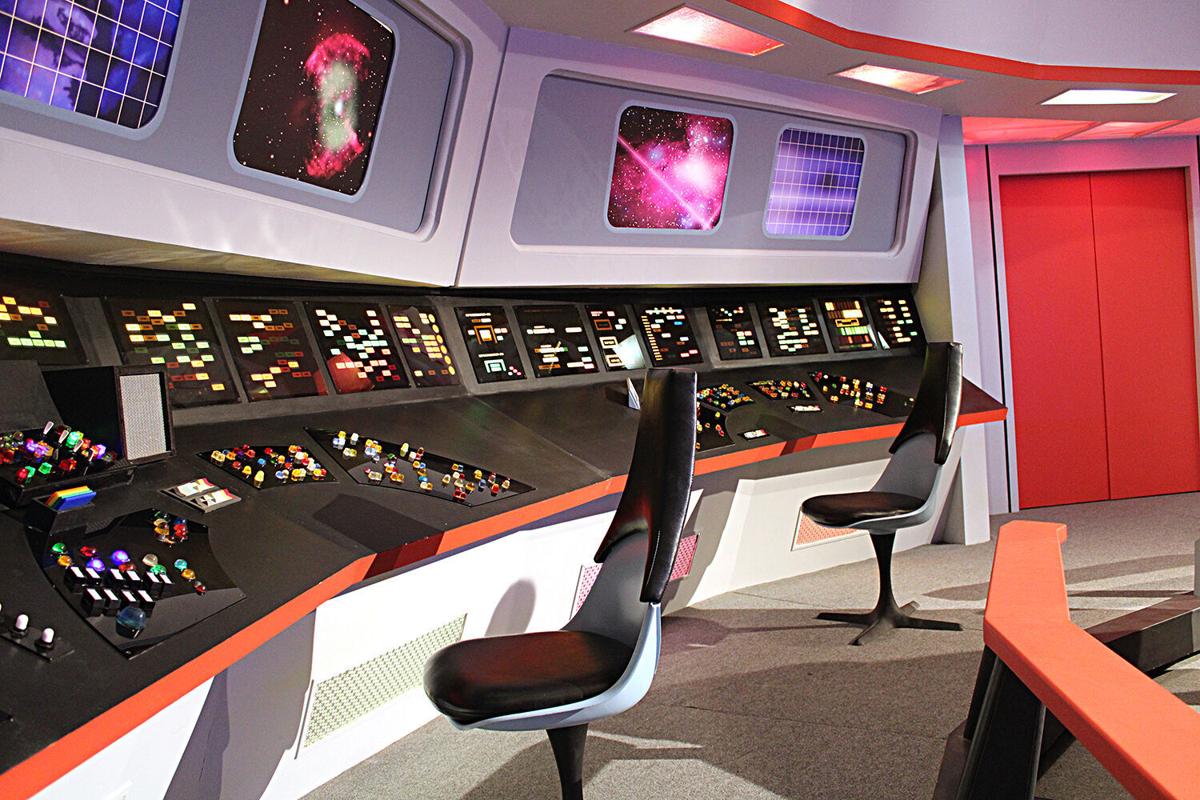 A closeup of the bridge consoles. 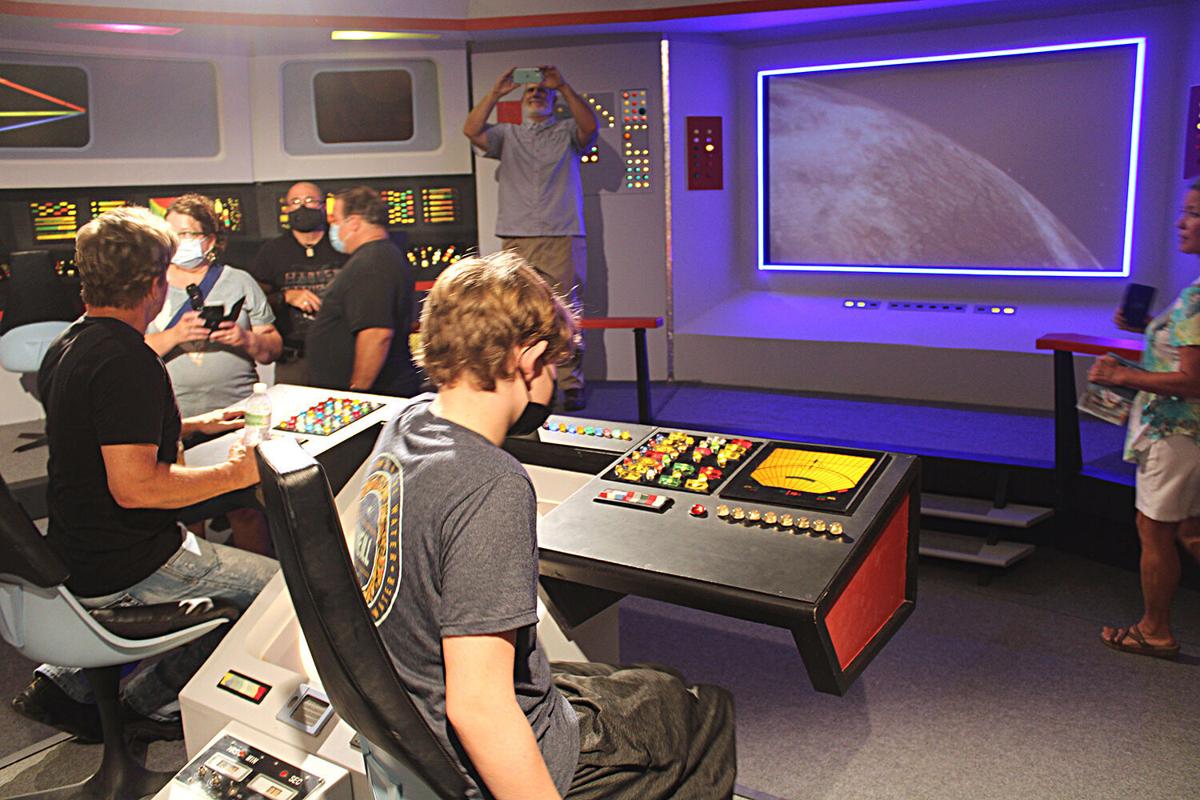 Vic Mignogna (left, seated) and a fan man the helm of the Enterprise. 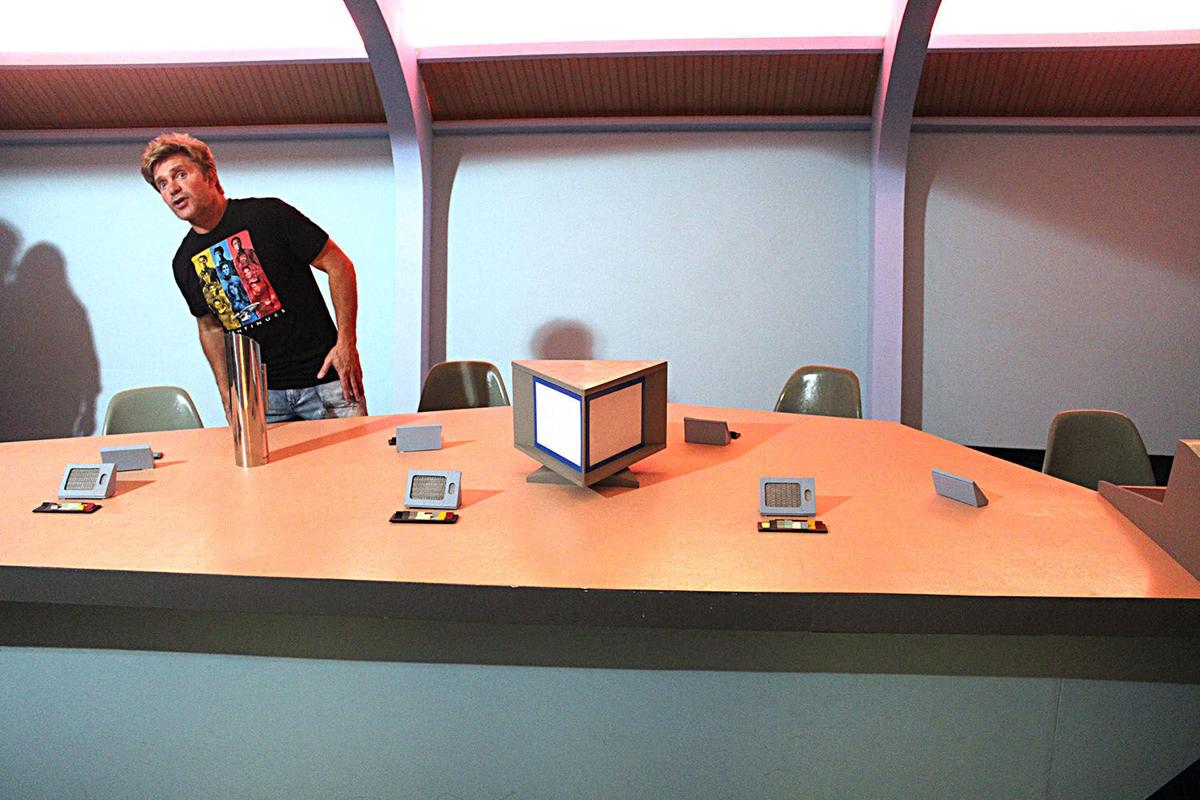 Vic Magnogna talks to studio visitors from the set of the Enterprise's briefing room, where the command staff could hold conferences. 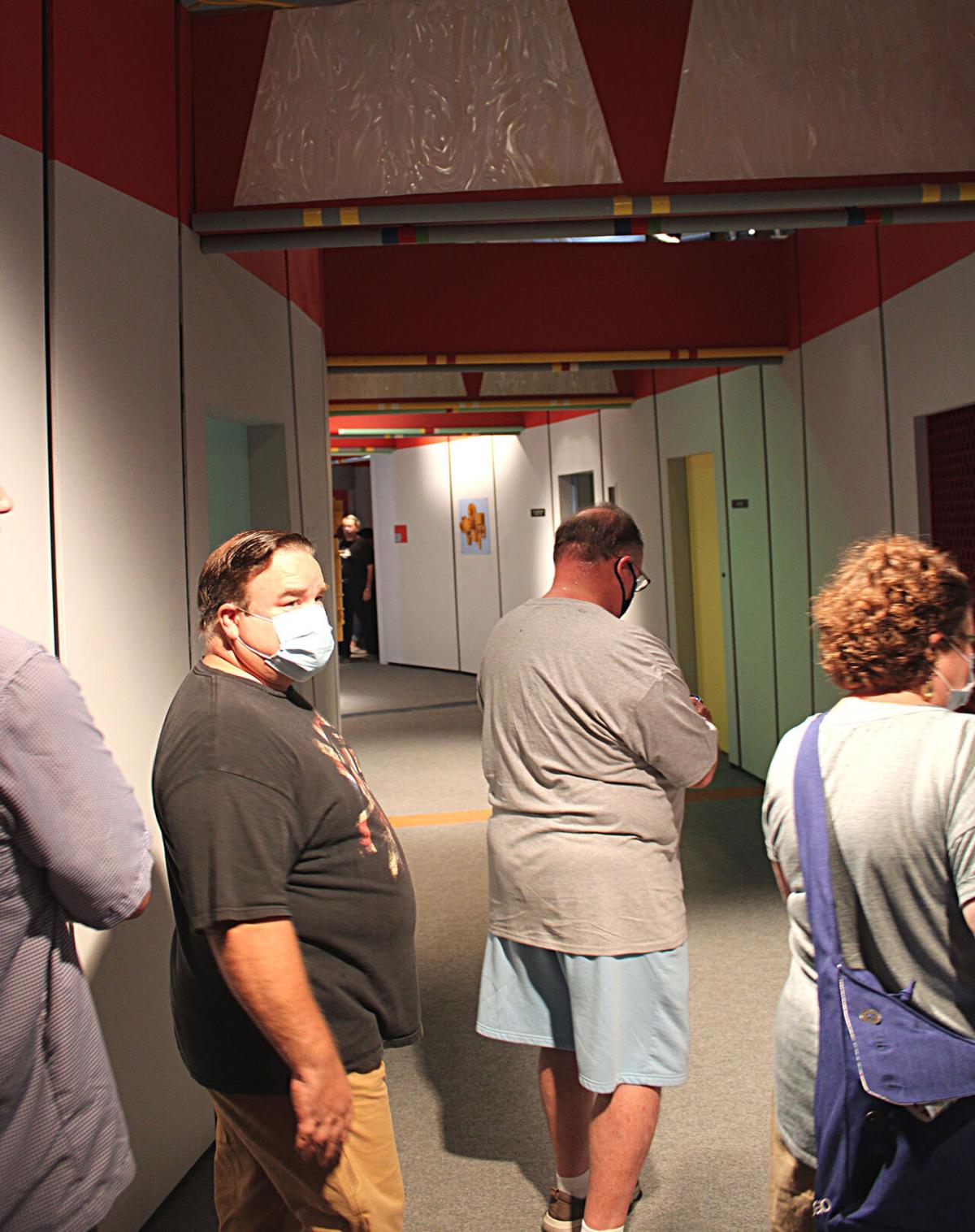 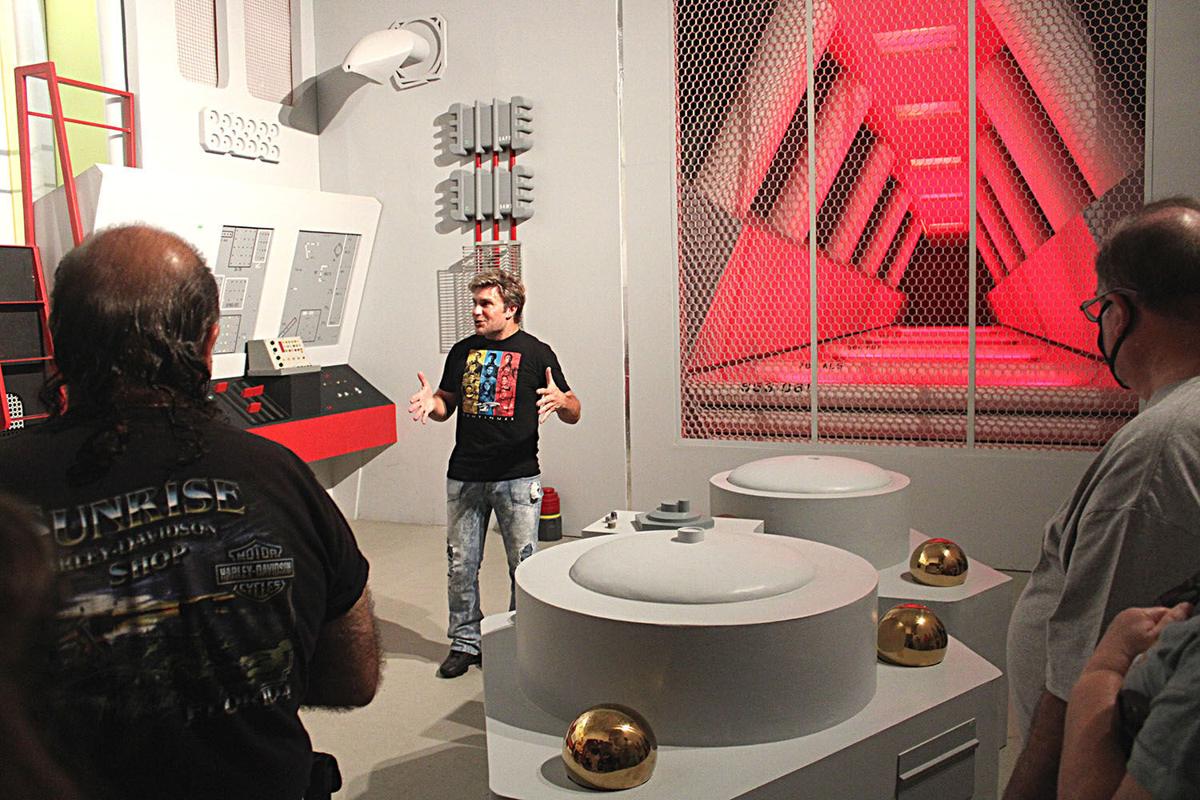 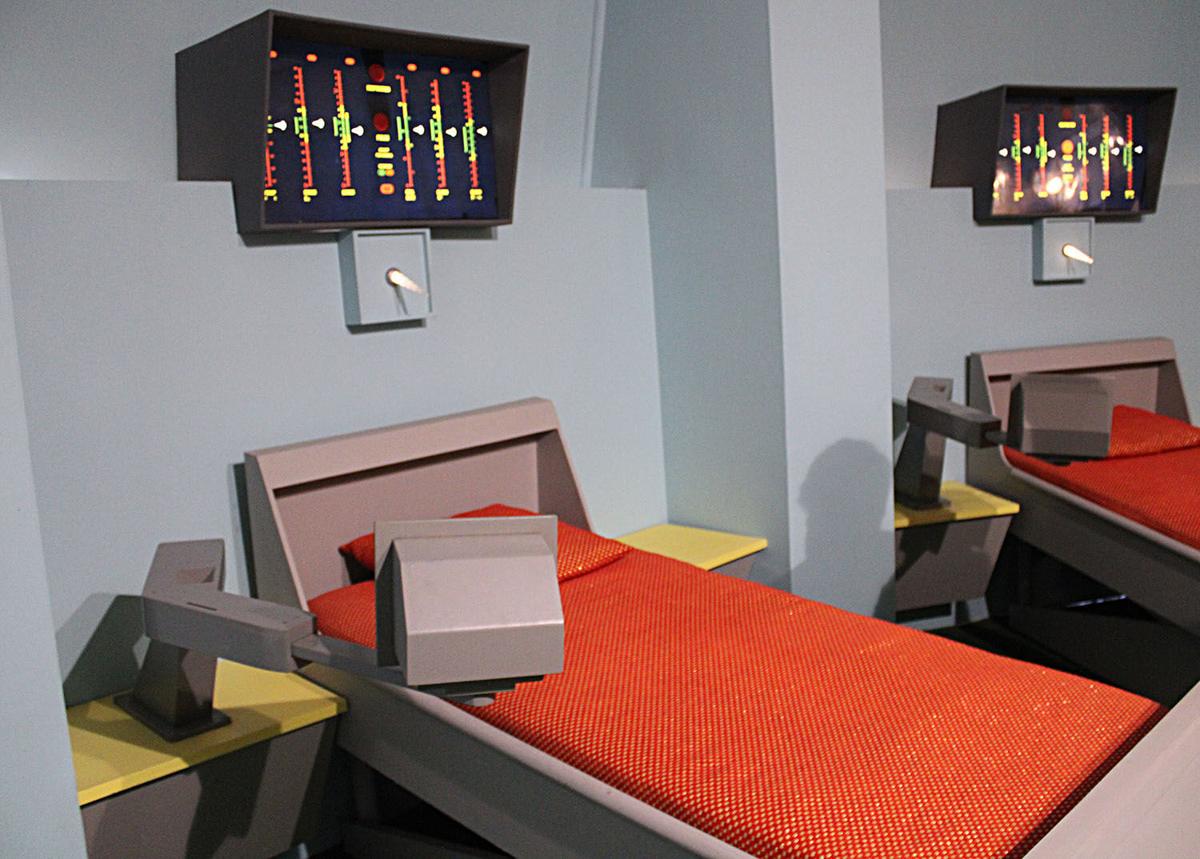 A closeup of the 'biobeds' used in the Enterprise's sickbay. 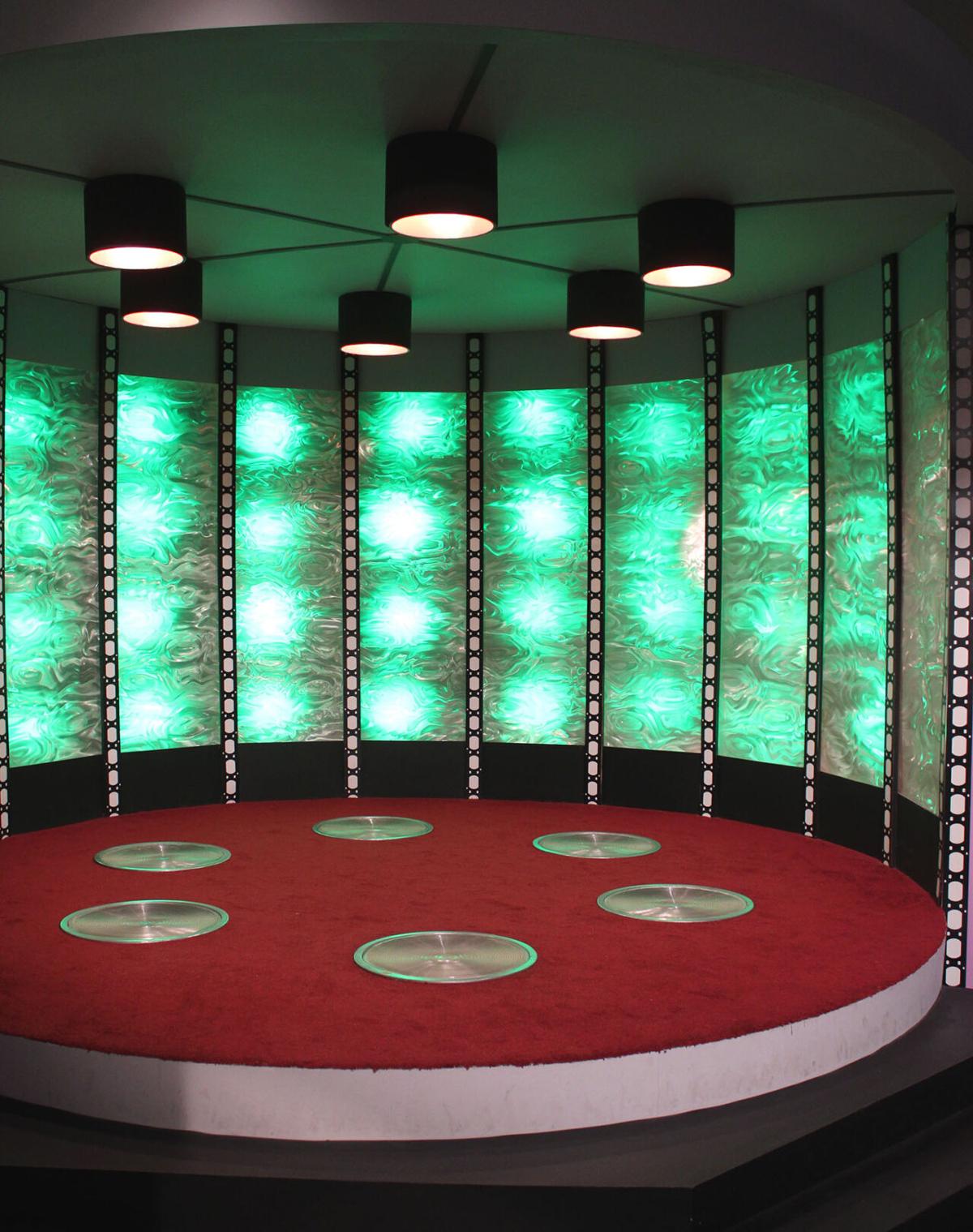 Beam me up, Scotty: Neutral Zone Studios' set for the Enterprise's transporter room.

Visitors check out the bridge of the U.S.S. Enterprise at Neutral Zone Studios in Kingsland.

A closeup of the bridge consoles.

Vic Mignogna (left, seated) and a fan man the helm of the Enterprise.

Vic Magnogna talks to studio visitors from the set of the Enterprise's briefing room, where the command staff could hold conferences.

A closeup of the 'biobeds' used in the Enterprise's sickbay.

Beam me up, Scotty: Neutral Zone Studios' set for the Enterprise's transporter room.

Note: This story has been updated

KINGSLAND — From the outside, the building is anything but remarkable: a large, prefab warehouse sitting off a cluster of residential streets a few miles from a Navy base.

On the inside are strange new worlds.

Many people may not realize it, but for several years, the adventures of the crew of the starship Enterprise were filmed on a soundstage about two hours’ drive from Valdosta.

“Star Trek Continues,” a webseries, was filmed in Kingsland in South Georgia from 2013-17.

Officially, “Star Trek Continues” was quite unofficial. It was a fan-created and fan-filmed nonprofit operation, from the building of the sets to the writing of the episodes to the creation of costumes and special effects.

Vic Mignogna, who developed the show and starred as Capt. James T. Kirk, told walkthrough visitors at a recent fan weekend at the studio that his intention was to finish what the original “Star Trek” series left uncompleted.

“Star Trek” — the original series — debuted Sept. 8, 1966, and ran for three years on the NBC television network. The show followed the adventures of the heroic Capt. Kirk, his cool and reserved half-alien first officer Mr. Spock, crusty Southern ship’s doctor Leonard “Bones” McCoy and the rest of the U.S.S. Enterprise’s crew on their “five-year mission” into the unknowns of deep space.

Then NBC cut the cruise short after only three years.

Mignogna had been involved with an earlier “Trek” fan-film project, “Starship Farragut,” and decided it was time to carry out his lifelong dream to produce a "Star Trek" episode. He wanted “Star Trek Continues” to finish out the Enterprise’s original five-year mission.

Money was raised through fundraising campaigns, including the Kickstarter and Indiegogo platforms, and 11 episodes of “Star Trek Continues” were produced and distributed online for free. All the episodes remain available for viewing on YouTube.

The high-power talent wasn’t just In front of the camera. Doug Drexler, a special-effects artist for the official “Trek” shows in the 1990s, contributed visual work to six “Star Trek Continues” episodes. In a video interview, Oscar-winning actor Tom Hanks gave high praise to the production values of the webseries.

The end, and afterward

The end came with the filming of the final story, “To Boldly Go, Parts I and II,” in 2017. Standing in the Enterprise’s main engineering set, Mignogna told a visitors that another fan-film effort unrelated to “Star Trek Continues” raised a good deal of money in the fan community — but that project never materialized and the money vanished.

That was when CBS — the current rightsholders to the “Trek” franchise — decided to clamp down on fan productions, he said.

After the "Star Trek Continues" folded, Mignogna sold the studio sets to Ray Tesi of Boca Raton, Fla., who now operates the property under the name Neutral Zone Studios (In “Trek” lore, the neutral zone is a no-man’s-land border between the good guys, the United Federation of Planets, and the bad guys, the Romulan Star Empire. Entry into the zone by ships of either side is an automatic act of war.)

Tesi – who describes himself as “a ‘Star Trek’ fan since day one” — operates as a nonprofit, renting the sets out to other fan groups who want to make their own films, as well as birthday events, weddings and even as the backdrop for a rock video. All funds raised go toward upkeep of the studio.

Instead, he said he scrupulously follows rules crafted by the television network for fan productions.

In the wake of the above-mentioned fan-film fundraising scandal, CBS laid down rules for “Trek” fan-film groups to follow to keep the network from coming after them. These include limiting films to no more than 15 minutes (“Star Trek Continues” filmed one-hour episodes), using all-amateur casts, setting a cap on budgets at $50,000 and not using the films to produce revenue.

During the open house weekend in September, groups of about 20 visitors each were ushered through the sets in the Kingsland facility.

Fans were stunned by the exacting detail of the sets, replicating to the smallest detail the original 1960s props and fixtures.

The layout of the sets within the building largely follows the pattern of the sets built in the 1960s by Desilu, the Hollywood production firm that launched “Star Trek.” Most of the sets for the individual rooms branch off from a long, curved ship’s corridor.

Among the locales shown to visitors were:

– The ship’s brig, a small jail cell for prisoners. Instead of a barred door, a brightly lit door frame hints at a force field to hold miscreants inside.

– Main engineering, the location of the Enterprise’s antimatter powerplant and Scotty’s domain.

– The ship’s sickbay, complete with three “biobeds,” hospital beds with built-in diagnostic sensors to take blood pressure, temperature and other medical readings, which are displayed on overhead screens.

– The briefing room, where the ship’s senior staff can hold conferences.

– An all-purpose private quarters set which could be quickly redecorated to serve as any crewman’s bedroom by swapping out personal effects.

– Auxiliary control, an emergency backup control room for the Enterprise, for use if the main bridge was damaged beyond repair.

– The transporter room, where the crew used teleportation to “beam” to and from planetary surfaces and other ships.

– The bridge. At the end of the walkthrough was the crown jewel, a full-size replica of the iconic filming set for the control room of the U.S.S. Enterprise. As visitors posed for photos, listened to Mignogna’s tales of filming the series and sat in the captain’s chair, familiar electronic noises generated by the scanners, computers and other bridge equipment could be heard.

Fans wrapped up in the fun of it all almost didn’t notice the sweltering heat – almost. There was no air-conditioning and little air moving around. The starship Enterprise was in a pitched battle with a South Georgia heat wave. Tesi said the cost of air-conditioning a huge warehouse structure was prohibitive, which is why the studio generally closes in May and reopens In September.

In an interview a few days after the tour, Tesi explained what appeals to him about “Star Trek.”

“I like it’s optimistic view of the future,” he said.

The next fan weekend is planned for Oct. 23-24. For information on the free tours offered on these weekends, go to neutralzonestudios.com.