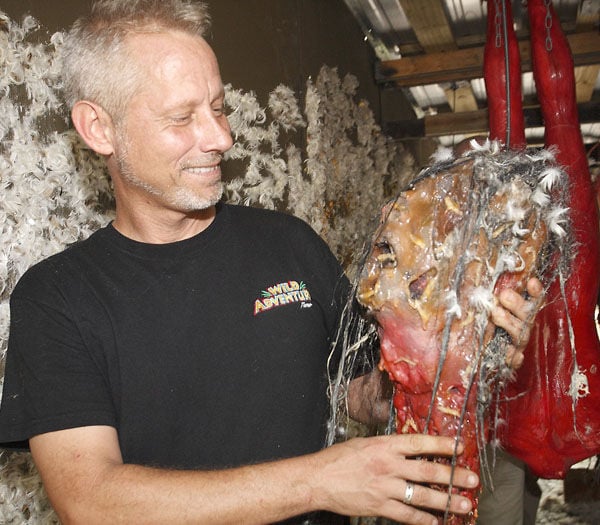 Mike Inks, the conceptual artist for Phobia at Wild Adventures Theme Park, with one of the props along the trail in Blackwater Swamp. 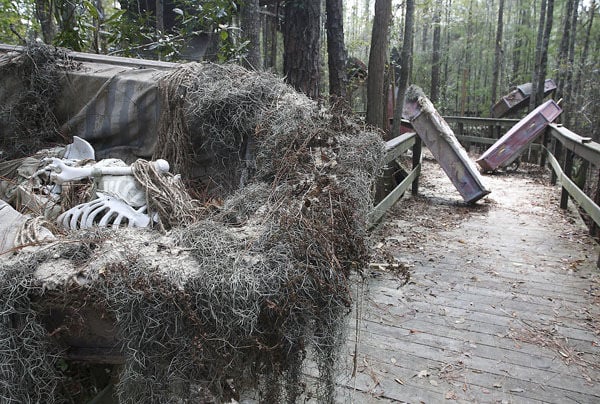 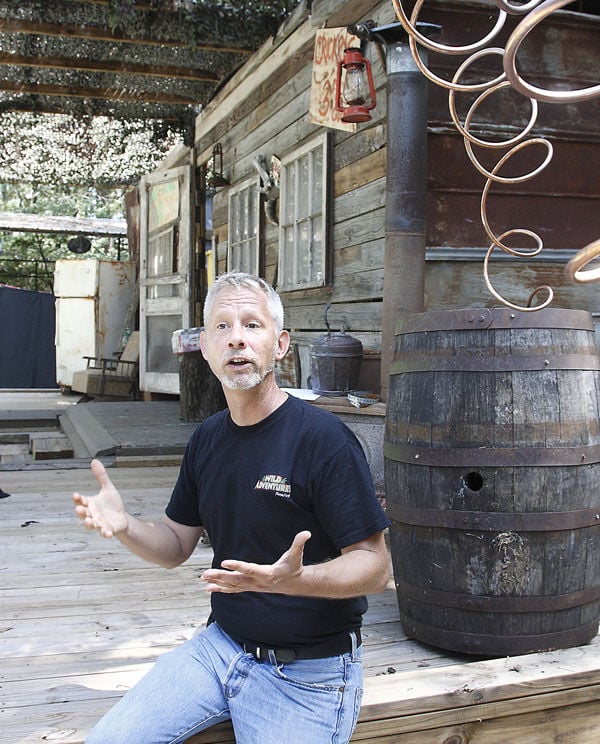 Mike Inks, the conceptual artist for Phobia at Wild Adventures Theme Park, talks about the development of the story for this years Halloween event in front of Fletcher's Bait and Tackle, part of the Phobia set and story. 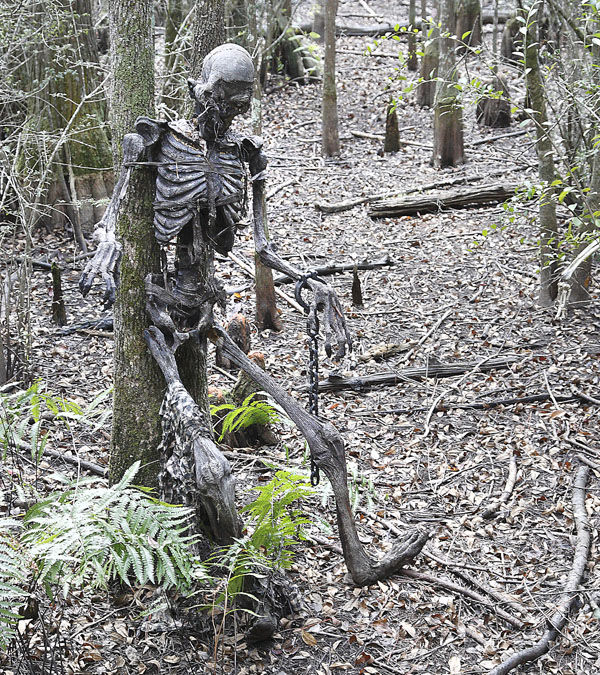 Mike Inks, the conceptual artist for Phobia at Wild Adventures Theme Park, with one of the props along the trail in Blackwater Swamp.

Mike Inks, the conceptual artist for Phobia at Wild Adventures Theme Park, talks about the development of the story for this years Halloween event in front of Fletcher's Bait and Tackle, part of the Phobia set and story.

Walking through the natural habitat of woods and swamp along Wild Adventures’ Alapaha Trail, Mike Inks stops with a smile.

“Other haunters around the nation spend hundreds of thousands of dollars to create a swamp and environments that we have naturally,” Inks says, referring to how other parks and enterprises develop their haunted Halloween experiences. “This place is a haunter’s dream.”

Still, Inks and the Wild Adventures crew have been busy adding bones and bugs, spiders and snakes, myths and monsters, to Wild Adventures’ natural fear factor. They’ve been busy for several weeks preparing for tonight’s opening of Phobia, the park’s annual haunted experience.

But, come dark, Inks and Johnson suggest taking the small children home. The Phobia experience is recommended for ages 13 and up. “It may be too intense for smaller children,” Inks says.

As Phobia’s conceptual artist, Inks has certainly been doing his best to ensure an intense experience for those who dare enter the Legend of the Blackwater Swamp. He’s even created an entire back story to set the stage for the experience.

Hawkins Mills was once an idyllic Southern community. The small town and its upstanding citizens thrived.

In the late 1920s, a snake-oil salesman arrived to sell his toxic potions. Hawkins Mills residents purchased great quantities of these potions, which prompted these good people to lose their reserve.

Within a matter of days, a massive storm obliterates Hawkins Mills. All that was good has been washed away in what some call the “Fearmaker’s revenge.”

Left behind is the Blackwater Swamp and the Krupps, a family that always lived on the outskirts of Hawkins Mills in terms of both the town’s geography and its once upstanding society. With no civilizing force to rule them, the Krupps revert to gruesome barbarism.

As time passes, some dare enter the swamp. In the 1940s, several curious teens vanish. Finding the teens’ shoes along his property, some blame the enormous Russell Krupp for the disappearances. But he is never apprehended in the swamps.

In the 1960s, Christopher Fletcher opens a bait, tackle and tour shop in the swamp. His guests disappear. Georgia officials eventually shut down the business though Fletcher and his sister stay as residents.

During 40 years, all remains quiet. In that silence, Russell Krupp and his clan become the region’s bogeymen. Until visitors begin disappearing again in 2011. Searchers find a digital camera belonging to one of the missing. Only bits and pieces of video remain, but it is strange enough to spur the Geist Paranormal Services team to arrive at the swamp. And Geist hopes to find willing volunteers to help it search the region.

With this tale as a framework, visitors wait in line as park employees playing Geist personnel review the video and explain the legend. In groups of 10 to 15, visitors travel to Fletcher’s Bait, Tackle and Swamp Tours where Christopher Fletcher (played by Pete Ganas) shares many of the gory legends and ghost stories surrounding the swamp.

Along the trail, visitors encounter a charnel house of bones. They feel the slick abattoir squish of animal and human remains. Walls tighten like the abdominals of a constrictor. Chainsaws growl. Hands reach. Shattered throats scream. Skunk apes break from the woods. Dogs howl from nowhere then snarl at visitors’ feet. Darkness and night air. Stars and clouds. Incessant sounds of something moving in the shadowed brush. Shrieks echo from somewhere along the stygian trail.

On Thursday, Inks and the Wild Adventures staff continued work on the trail. They held a dress rehearsal then continued working with plans of fine-tuning things until tonight’s opening.

Through the next few weeks, Inks imagines changes occurring throughout the Phobia run. Just so newcomers and returning guests will never know exactly what to expect.