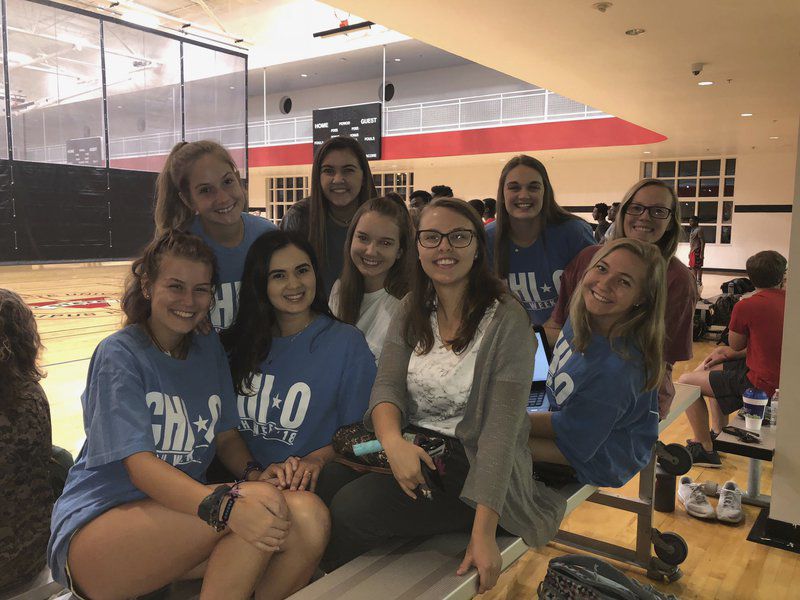 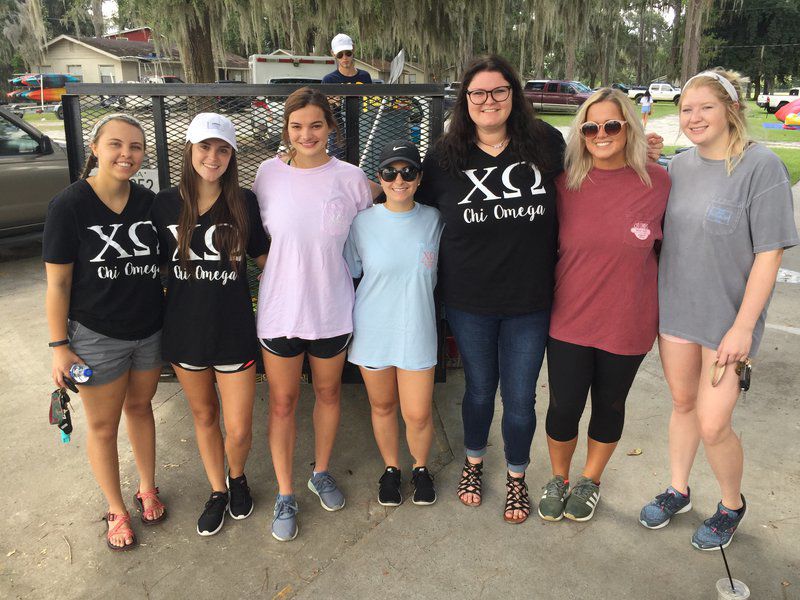 EDITOR'S NOTE: This story was produced by a student in Dr. Pat Miller’s Valdosta State University feature writing course. Journalists were asked to cover VSU groups who volunteer in the Valdosta community and to write stories that demonstrated how these groups benefit Valdosta.

Herrin organizes a majority of the community service events, allowing Chi Omega to get directly involved with residents of Valdosta’s community. She usually plans three or four major events per semester, but additional events add up to about 10 community service opportunities.

The TCT7 Mile Swim, an annual nonprofit held by the James Eunice Charity Foundation, honors James Eunice, a Valdosta High School senior who drowned at Ocean Pond while duck hunting in 2011. Event participants choose to swim either one, three-and-a-half or seven miles. The volunteers, including Chi Omega members, help the foundation reach these goals.

“Without the help of the sororities and the fraternities ... we would not have the level of help and the level of help that signs up and says they'll show up [then] show up,” Tammy Eunice, co-founder of the James Eunice Charity Foundation, said. “You don't always get that in just a regular volunteer. But those groups, they stand behind what they say.”

This year, 15 Chi Omega sisters signed up for and, of course, showed up to the event. The swim took place at Long Pond in Lake Park, Sunday, Sept. 9. As the sun glistened off the water’s surface, volunteers passed out Powerades, provided encouragement and helped where needed.

The funds go back into the community, mainly through local donations and scholarships. In 2011, the foundation donated more than $148,000 to the Lowndes County Sheriff’s Office Dive Team for better rescue gear, a way to remember James Eunice on his 18th birthday.

Additionally, the foundation presents the James Eunice Legacy Scholarship to high school seniors across South Georgia and North Florida. The Eunices have given 106 scholarships in 2018.

Bell received a $500 James Eunice Legacy Scholarship in 2015 to cover costs for textbooks, tuition or supplies. Her sister, Rebecca Bell, also a member of Chi Omega, received the same scholarship in May.

The scholarship "helped me a lot financially, and it took a lot of burden off my parents who have tried to make it where I’ve gone debt-free,” Belinda Bell said.

But the bond she formed with John and Tammy Eunice proved to be of much higher value.

“It also kind of showed me that somebody believes in you,” she said. “I think that was more important than the money because it’s like a reminder that you can do it and somebody’s in your corner.”

Bell’s experience with the James Eunice Charity Foundation has showed her how charity can have a great impact on recipients’ lives, she said. So she continues to serve wherever she can, aiming for 50-60 community service hours a semester.

Many come from Miracle League.

The Miracle League of Valdosta hosts baseball games for anyone 3 years and older with mental and/or physical challenges. Between 85 and 110 participants are involved.

The field at Freedom Park appears like any other baseball field. But its features, including an artificial turf for wheelchair accessibility and bouncing baseballs, accommodates players’ needs.

More than 300 volunteers come out to play, bringing smiles and memories that will last a lifetime. Chi Omega members, vital components to Miracle League of Valdosta, act as buddies to the players and provide them with love, support, encouragement and praise to help players reach achievements on and off the field.

Buddies are an essential element of Miracle League, said Andy Gibbs, Miracle League of Valdosta’s founder and league director, as well as Valdosta City Council member. Without Chi Omega and other volunteers, the program wouldn’t be able to cover the bases necessary for a homerun.

“In order to have players, you must have buddies,” Gibbs said. “They take care of players. They make sure they have water, they are safe on the field and more. … It will hurt us not to have them.”

Wolfe has two autistic cousins — one verbal, one nonverbal. The older one plays basketball in the Special Olympics in her hometown, Dacula. So she considers Miracle League to be a “big thing” for herself.

The sisterhood community service event "was painting rocks for the local hospital,” Herrin said. “We’re going to go deliver them to the kids.”

The rock-painting phenomena, which has exploded during recent years, brings joy and positivity to the lives of those who discover or receive the rocks. Anyone can join the movement by painting a rock and then hiding it for someone else to find in a scavenger hunt or simply giving it to someone special.

Members create baskets for nursing homes and the Haven, Valdosta’s battered women’s shelter, and spend time with the children of Scintilla Charter Academy’s afterschool program, as well as donate food to the animals at the local shelter.

Wish Week occurs twice per year, in spring and fall, to raise money for the Make-A-Wish Foundation, Chi Omega’s philanthropy.

This semester, Wolfe is in charge of planning the philanthropy. In addition to Miracle League, the Make-A-Wish Foundation is personal for her as well.

Her father, who had histiocytosis, and grandmother, who had breast cancer, battled their diseases simultaneously, leading her to work in nonprofits. While volunteering in a local hospital at age 14, she met 2-year-old Peyton Greene, an acute lymphoblastic leukemia patient who wished for what every little girl dreams of — a trip to Disney World. Her wish was granted.

Greene, 8, beat the illness two years ago and now lives cancer-free. She and Wolfe remain in touch.

Since she has seen the effects of charities such as the Make-A-Wish Foundation, Wolfe said she strives to push Chi Omega past the goal.

Each sister participates in Wish Week by raising at least $100 and attending the week’s events. Normally, the goal is $10,000, the price of one wish grant. But Wolfe decided to lower it to $8,000 for the fall 2018 semester since she was not the original chair and had little time to plan.

Cake-A-Chi-O kicked the week off on a Monday. The student body paid for cake ingredients and threw them at volunteering members.

Percentage night at The Mix, a frozen yogurt shop in Valdosta, followed on a Tuesday. Members encouraged as many people as possible to come out and buy frozen yogurt, then Chi Omega received 10 percent of the sales.

The wing-eating contest took place on a Wednesday. Mulligan’s donated everything needed for the contest, so none of the budget was spent on the event. The restaurant also matched Chi Omega’s donation for the night, so members raised more than $1,000 within hours.

Finally, on Thursday: dodgeball. Teams paid $100 to participate in the games beginning at 7 p.m.

Fraternity brothers, including those from Delta Chi, Sigma Nu and Sigma Chi, swarmed the Student Recreation Center to pay their dues and battle against one another. Sorority sisters filled the sidelines, their laughs and cheers reverberating throughout the room in support of the teams and, more importantly, the cause.

Each of these events brings together students who share one passion: the desire to help critically ill children.

“I just think it kind of brings it back home when you see wishes being granted … Just bringing a little bit of joy in [children’s lives] during their most difficult time is something that will stay with them forever,” Wolfe said.

Out of the 850 children awaiting wishes in Georgia, 34 live in the Valdosta area. In 2017, Chi Omega granted a local boy’s wish for hippotherapy, a type of therapy that improves coordination, balance and strength through horseback riding. The sorority has granted the wish of another child living in the Valdosta area as well.

“The reason why (these children) are waiting ... (is) because we need to have funds and awareness raised to help grant those wishes and let people know that there is a wait,” Welch said.

Chi Omega tackles these obstacles by raising awareness on the VSU campus and in the Valdosta community about Make-A-Wish Georgia and its local impact. Through spreading awareness and raising funds, members aim to reduce the number of children waiting to as little as possible.

For Chi Omega, volunteering isn’t about giving back or returning favors. It’s about understanding the effects of making a difference and paying it forward to the next person in need.

Not only do members act on this through community service and good deeds, but their morals reflect these values.

While Chi Omega is set at the center of VSU, its impact extends across the Valdosta community.

“This isn’t just a sorority,” Harlee Webb, another Chi Omega sister, said. “This is a group of (women) that not only comes together and does all these amazing volunteer hours and community service, but it’s (women) who are all striving for the same things … (Members) go out into the community, and they want to see the community grow as well.”

Because of Chi Omega, Valdosta’s support system and values flourish, members said. Through selfless volunteer hours, the sisters are role models and keep their focus on what really matters: making a difference in the community they call home.