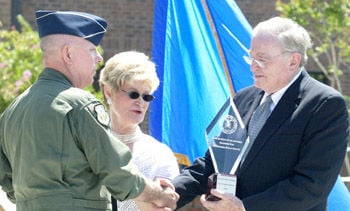 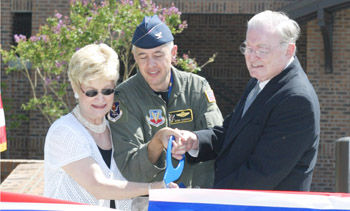 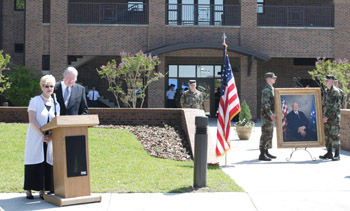 Paul Leavy/The Valdosta Daily Times Dr. Lucy and Parker Greene speak during the ceremony dedicating the new Base Support Center in honor of Parker Greene Friday morning. Framed to the right in the photo is a painting of Greene which will be hung in the center.

Paul Leavy/The Valdosta Daily Times Dr. Lucy and Parker Greene speak during the ceremony dedicating the new Base Support Center in honor of Parker Greene Friday morning. Framed to the right in the photo is a painting of Greene which will be hung in the center.

MOODY AIR FORCE BASE — The U.S. Air Force Chief of Staff joined Moody Air Force Base on Friday in honoring a man who has been one of the base’s best friends. Following the dedication of the new Consolidated Base Support Center in Parker Greene’s name, Gen. T. Michael Moseley presented Greene with the first ever Chief of Staff’s Exceptional Service Award. “I don’t know how and what anyone else is going to do to compare with your dedication and contribution to Moody Air Force Base to earn this award after you,” Moseley said to Greene, who was joined by his wife, Dr. Lucy Greene. Accompanying the Greenes for the ceremony were their children, Buck and Sharon, along with countless friends from Moody and the community. “In my wildest dreams, I never envisioned something like this,” said Parker Greene. “It is awesome the number of people who showed up.” “Air Force, we admire you, and we appreciate all that you do to protect us and keep us safe, making it possible for us to help serve you,” said Dr. Lucy Greene. “We are grateful for this honor.” Parker Greene was the original chairman of military affairs for the Lowndes-Valdosta Chamber of Commerce in the early 1970s, then served as executive director of the Moody Support Committee beginning in 1991. He has been credited with making Moody “BRAC-proof,” a reference to the Base Realignment and Closure committee. He also worked for more than 10 years with the Georgia Department of Transportation to ensure the improvement of Bemiss Road, the main thoroughfare into and out of Moody. Col. Kenneth Todorov, 23rd Wing commander, gave remarks about the occasion and Parker and Dr. Lucy Greene during the ceremony in front of the new base facility. “It’s another outstanding day for Moody,” Todorov said. “Today is a day of history to add for Moody Air Force Base, but we are not here to honor the function or presence of this $10,000,000 building. We are here to honor a man that has served as Moody’s ambassador to the United States government and the Air Force.” A portrait of Greene that will hang on the second floor of the base support center also was unveiled Friday. “Parker has touched the life of thousands of airmen. Great people like Parker have always supported Georgia’s military, and Parker has been here as Moody has changed roles from tactical to rescue,” said Todorov. “Parker understands the mission of Moody and the value of our base and rich heritage. He has been helping Team Moody through transitions and four Base Realignment and Closure periods.” After the closing remarks, all guests were invited for the first tour of the 46,064-square-foot Parker Greene Base Support Center. The building includes 240 resident personnel, a law library, classified and unclassified communications capabilities, and training and testing rooms. It houses the Commander’s Staff, Public Affairs, Safety, Historian, Judge Advocate, Civilian Personnel, Housing Management and several other departments.