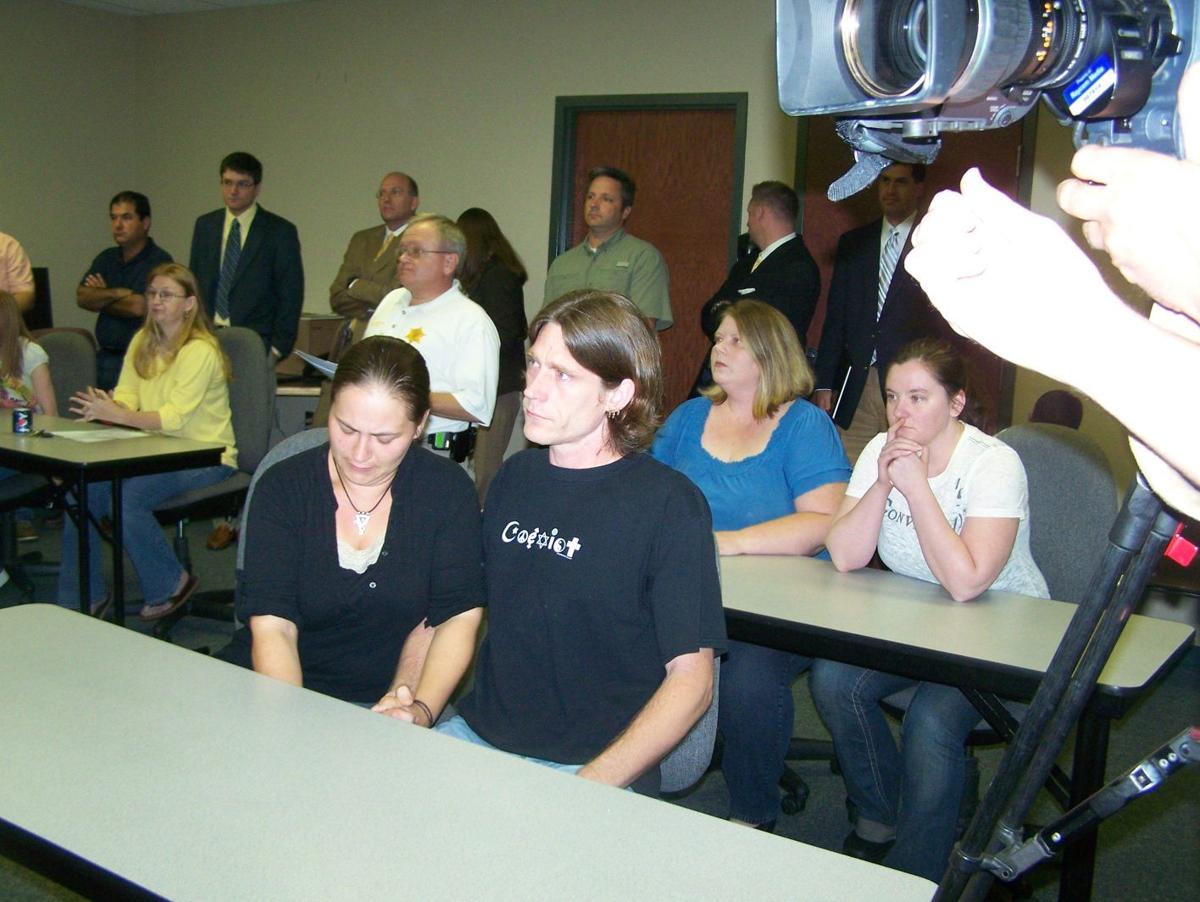 Three people, including the victim's mother-in-law, have been arrested in connection with the death of Sunday Blombergh, 28, who disappeared April 22, authorities said Friday.

Roy Herman Evans, 44, and Ruby Anne Evans, 45, both of 49 Briarwood Lane in southern Tift County near Lenox, are each charged with murder. Kenneth Randall Tomlinson, 48, of 311 Virginia Ave., Apt. 422, in Tifton, is charged with concealing Blombergh’s death.

The Evanses are husband and wife, and Ruby Evans is the mother of Sunday Blombergh’s estranged husband, who is the father of Blombergh’s seven-year-old daughter.

Tomlinson is a friend of Herman Evans, according to authorities. All three are being held in the Tift County Jail without bond and were expected to make their first court appearance Friday afternoon.

“We met at length and talked about different individuals involved in the investigation and death,” Bowden said. “At least one more will be arrested.”

During a press conference Friday at the Tift County Sheriff’s Office, GBI agent Mark Pro said one of the trio arrested had cooperated with authorities and led them to Blombergh’s body. A person involved in the investigation confirmed that Tomlinson was the cooperative suspect. When asked if anyone had confessed to killing Blombergh, Bowden responded, “We’re not at liberty to comment on specifics of what the evidence will show.”

Blombergh’s badly decomposed body was found Thursday afternoon in a wooded area in Colquitt County near the Tift County line, authorities said. The body was found in deep woods accessed from near the bridge at the dead end of Vickers Bridge Road, said Colquitt County Coroner Verlyn Brock. The location was between Ellenton and Lenox.

Brock said he was called out to that area at about 1:15 p.m. Thursday. The condition of the body prevented him from determining the person’s sex or age, he said. The body was turned over to the Tift County Coroner’s Office.

“It is our expectation that evidence will show that Sunday and her child lived with Ruby and, basically, Ruby wanted the child,” said Tift County Sheriff Gary Vowell. “Sunday was preparing to move to Tallahassee to go to work and had decided to leave the child with Ruby so she could finish the school year.”

Vowell said that he and others involved in the investigation didn’t believe Blombergh had been held against her will for any period of time before she was killed. He said he couldn’t exactly say the date of her death and that her body had been sent to a GBI crime lab for an autopsy that, it is hoped, will determine the time and manner of her death.

Authorities on Thursday searched the house at 49 Briarwood Lane that Blombergh and her daughter had shared with the Evans couple; the house had been searched previously. Pro, the Georgia Bureau of Investigation’s  assistant special agent in charge of the case, said authorities returned to gather more evidence Thursday after interviews with suspects.

Linda Rutland, who owns the house, told the Gazette at the scene Thursday night that she was renting the home to Herman and Ruby Evans. Rutland said that Blombergh “had a habit of disappearing for days” but that she never suspected the young woman was dead.

Rutland said she didn’t visit the rental home very much and that she “didn’t see or hear much out of her (Blombergh). The last time I saw her, she had sores all over her body and was barely coherent.”

Late Thursday afternoon, David Haire, public information officer for the sheriff’s office, told the Gazette that the family had been notified that Blombergh’s body had been found, but he refused further comment and would not say where or when the body was discovered, or if foul play was suspected, or if anyone had been arrested.

However, Colquitt County Sheriff Al Whittington later confirmed that a man had been charged in connection with the case.

The GBI’s “Mark Pro will clear up any questions and illustrate why information wasn’t disseminated sooner,” Sheriff Vowell said during the press conference Friday.

“We were in the process of recovering Sunday’s body and interviewing and obtaining warrants,” Vowell said. “In no way was there any conspiracy or mystery pertaining to this case. We just wanted to get it right the first time. I hope you understand, especially my local media folks.”

Blombergh was the subject of an extended search after she disappeared. Her sisters told The Tifton Gazette that Blombergh had past drug problems but was believed to have been clean for some time and doing well.

Reportedly, Blombergh was packing in preparation for one of her sisters to transport her to Tallahassee, Fla., where she was starting a new job, on the day she disappeared.

Jennifer Caswell, a family friend who served as captain of “Team Sunday,” said during the press conference that it was important to note that Sunday was “a beautiful person with a beautiful smile.”

“She was a loving mother and the family is absolutely torn apart with this loss,” Caswell said. “There has been an outpouring of love and prayers.”

Caswell praised the GBI, the Tift Sheriff’s Office, Tallahassee Police, the Florida Department of Law Enforcement, and agents with the Department of Alcohol, Tobacco and Firearms and with the Drug Enforcement Agency for their work in the case.

“They’ve been wonderful,” Caswell said. “We will continue to pray and do what it takes to get justice from whomever was involved and get through this. It’s inconceivable that there’s such a disrespect for human life. It’s horrible and it’s a nightmare. Sunday’s family would never knowingly put Sunday in danger. We want the people to know who did the crime.”

Pro said that evidence indicates that drug use was a factor by some of those involved in the case, but he didn’t elaborate. He said Blombergh’s daughter was removed from the Briarwood Lane home as soon as her mother was reported missing. He wouldn’t say who had the child but indicated the young girl was safe.

Caswell said that Blombergh’s family “had no reason to believe that she was still on drugs. She was doing very well,” Caswell said. “Everybody has their problems, but Sunday was doing great.”

Although the outcome was not what had been hoped, Pro said it was a blessing for the family that the mystery of Blombergh’s disappearance had been solved so quickly.

Grinstead, an Irwin County High School teacher, disappeared from Ocilla without a trace on Oct. 22, 2005.