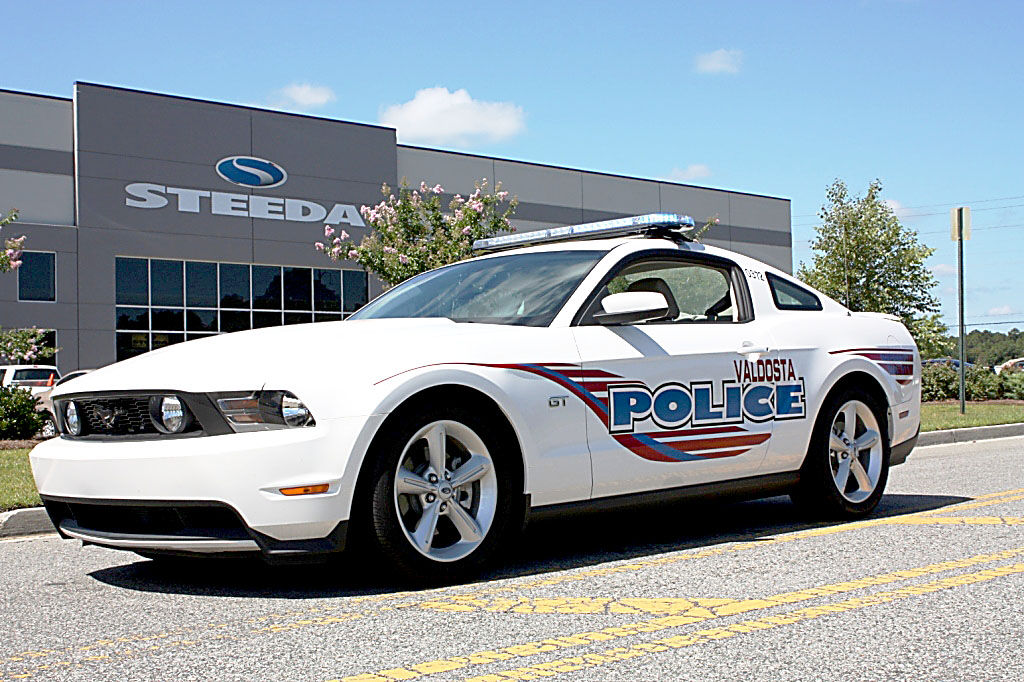 One of the new Steeda Mustang models to be used by the Valdosta Police Department. 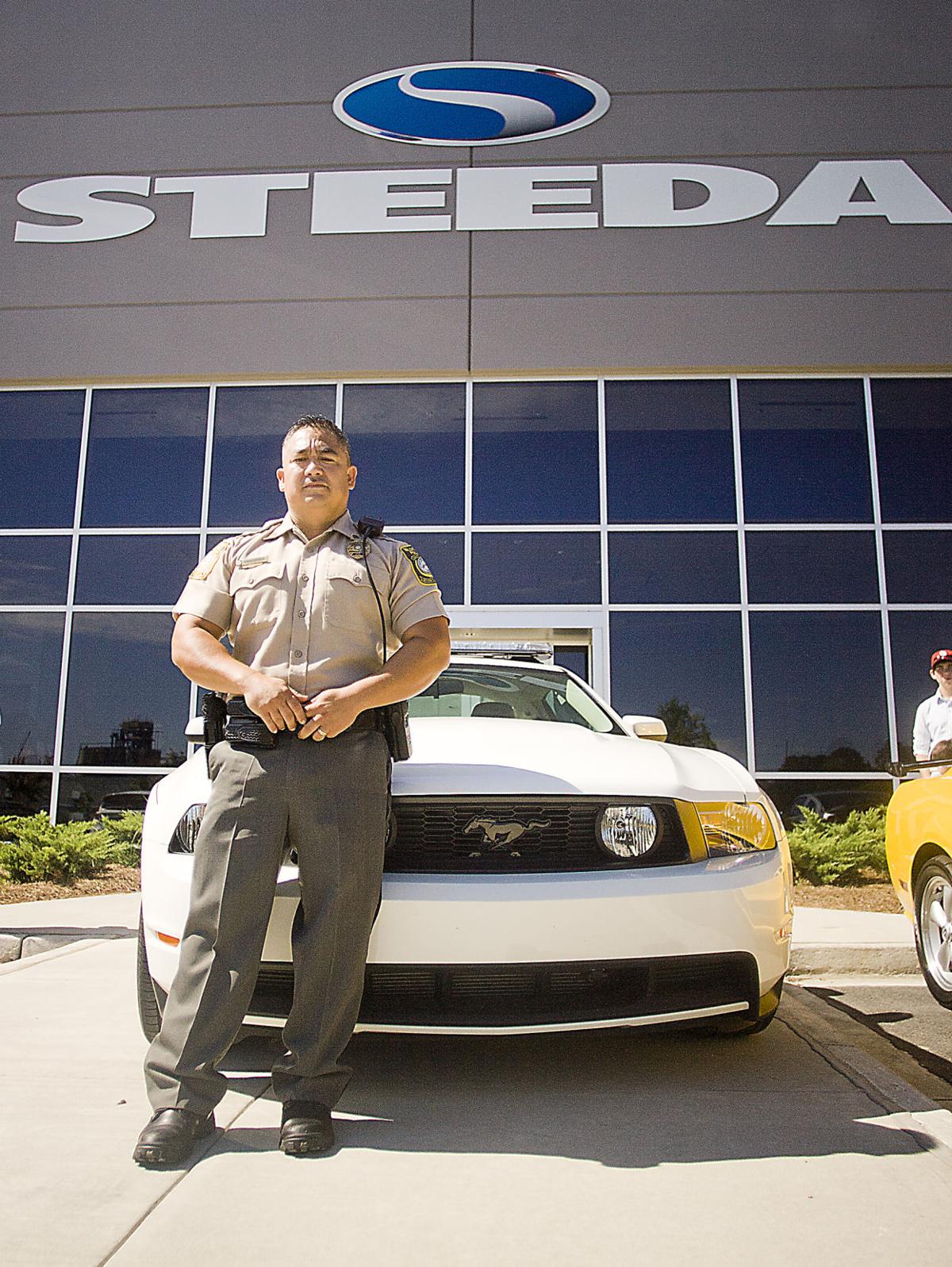 Valdosta Police Department Sgt. Tomas Chavarria stands in front of his new police cruiser after a press conference outside Steeda Autosports on Tuesday. Two new Mustangs, specially modified by the auto company, were unveiled at the event. Six Crown Victorias are scheduled to follow soon. 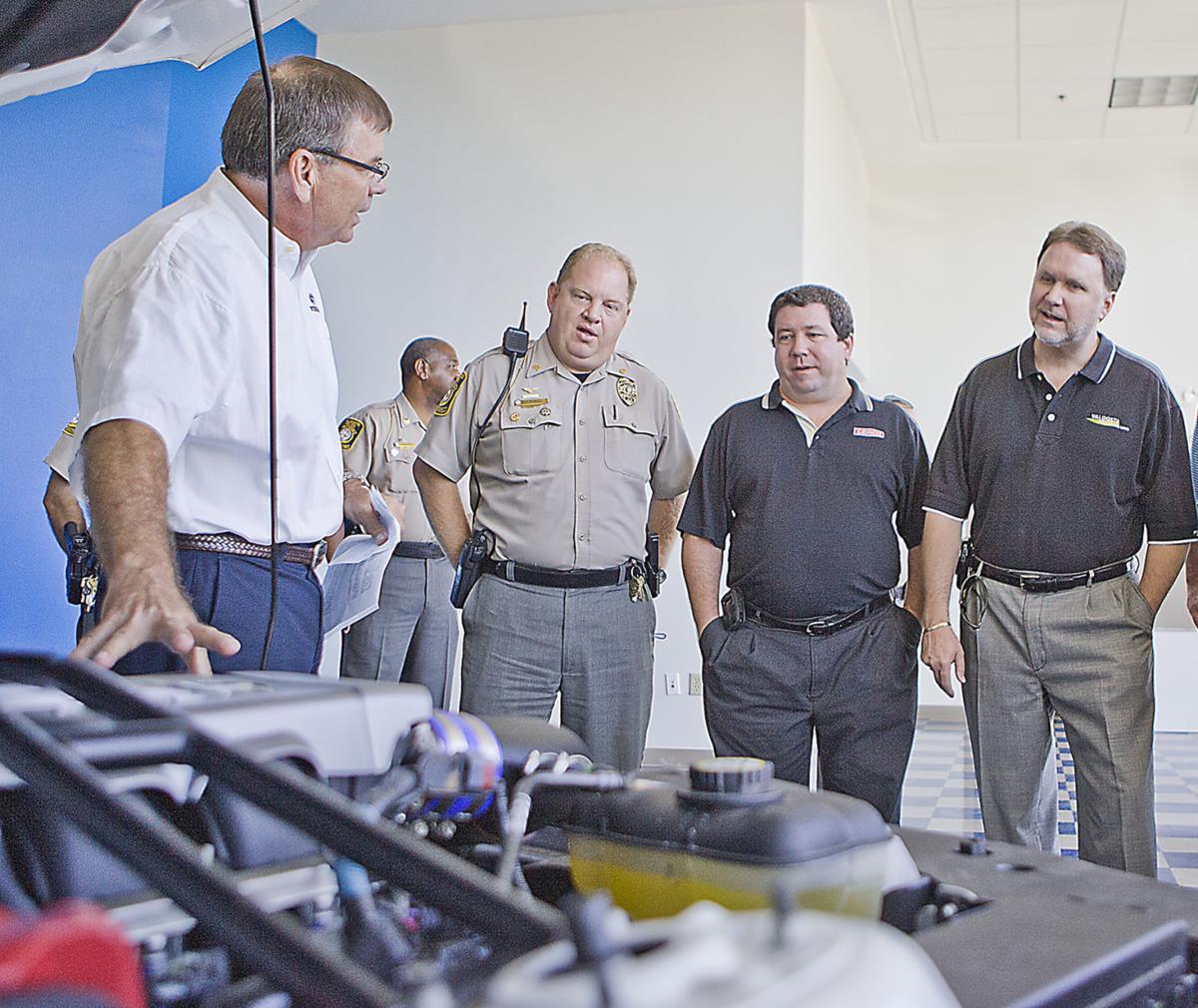 One of the new Steeda Mustang models to be used by the Valdosta Police Department.

Valdosta Police Department Sgt. Tomas Chavarria stands in front of his new police cruiser after a press conference outside Steeda Autosports on Tuesday. Two new Mustangs, specially modified by the auto company, were unveiled at the event. Six Crown Victorias are scheduled to follow soon.

Steeda, the foremost manufacturer of after market products for Ford Mustangs, recently relocated to Valdosta and performed the upgrades to showcase one of the company’s newest concentrations, which is working with police departments.

The modifications to the Mustangs included improved safety features, improved braking systems, and increased gas mileage, with the cars getting an average of 35 miles per gallon, according to Valdosta City Manager Larry Hanson.

“We are trying this out. We are going to evaluate the performance of the vehicles and see if the modifications really do make a difference,” he said.

Hanson said the city purchases 20 new police cars each year to replace old and worn out vehicles. This year, the city purchased two Mustangs and 18 Crown Victorias, six of which will also undergo the Steeda modifications.

“Ford is phasing out the Crown Vics, which are a staple for law enforcement. The Mustangs are being tested to see if they meet our needs,” Hanson said.

Valdosta Police Chief Frank Simons said the cars will not cost the department but are expected to save up to $30,000 over a span of five or six years.

“We are not spending any more money,” Simons said. “People are looking for there to be a catch at the end, but there is no catch. With all the upgrades these cars have, the department is looking at a big savings in maintenance alone. The safety of our guys and the citizens will be much better ... and, as we all know, you can’t put a price on safety.”

Simons added that the cars will only be used in the city’s jurisdiction.

Dario Orlando, president of Steeda, said the company was happy to do this for the VPD.

As the company is looking to roll its police car program out in other communities, Mayor John Fretti stated, “We predict this will go national, then we can proudly say they’re made in Valdosta.”

Two of the community’s residents said they altered their plans for the day in order to attend the unveiling.

“When I saw the announcement in the paper, I knew I had to come out here first,” Larry Kolb said. “There are so many things about these cars that are better than the stock Mustangs. My wife and I are both seniors and we both own convertible Mustangs. When I bought mine 25 years ago, Steeda wasn’t around; it was just a gleam in someone’s eye.”

David Boyd also said he altered his day of relaxing to come see the new addition to the police department. He said what he really likes is that it’s all done here in Valdosta.

“I think it’s a great thing for our community,” Boyd said. “I would really like to ride around in it.”