VALDOSTA — Valdosta Board of Education is facing a demand from a national group to halt student-led prayers over loudspeakers at football games.

The Freedom From Religion Foundation, a Wisconsin-based organization, sent a letter Oct. 14 to School Superintendent Todd Cason demanding the school system “take immediate action to end the practice of scheduling prayer at school-sponsored events and end the use of district equipment to project prayers to the public.”

The organization provided The Valdosta Daily Times with a copy of the letter. 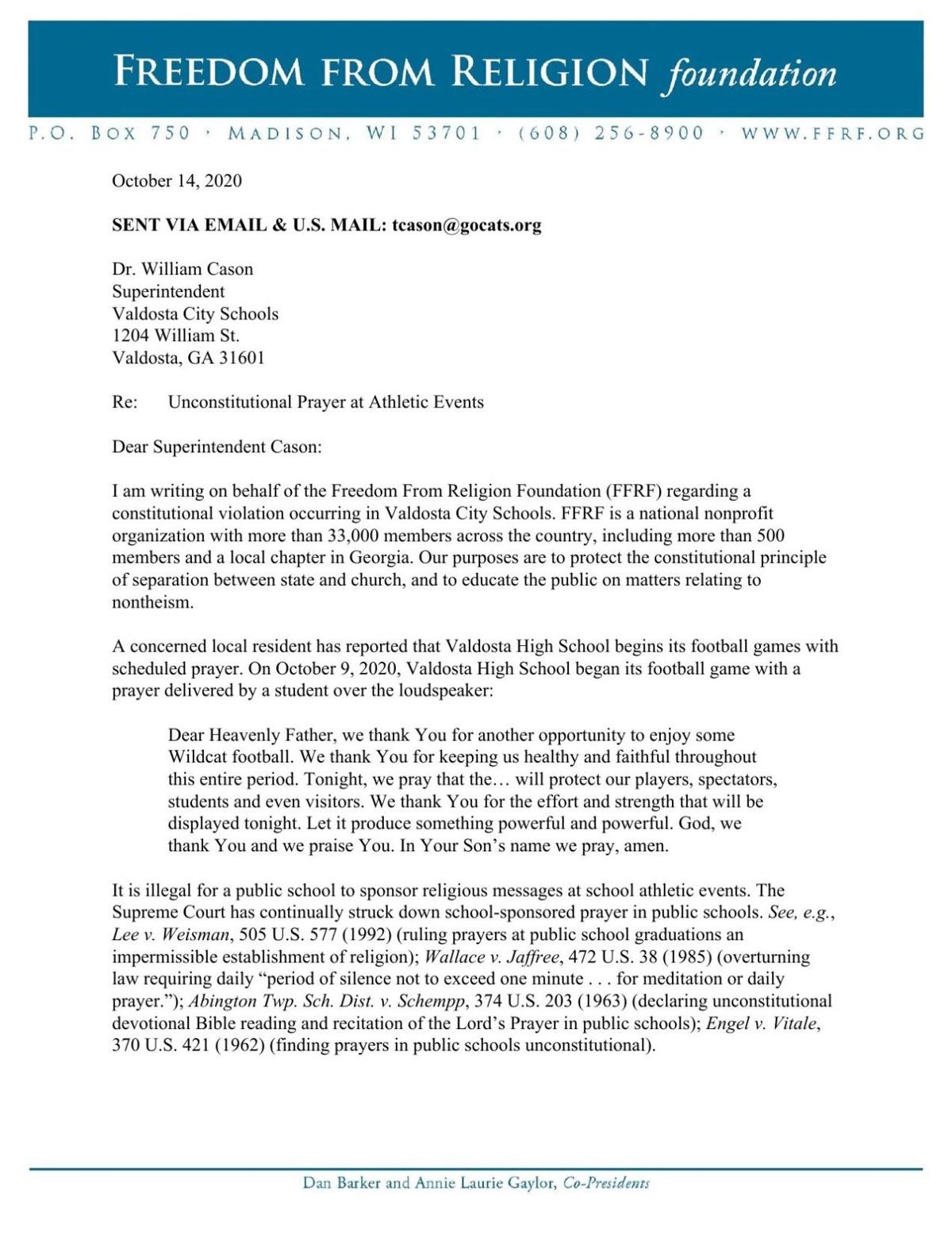 Freedom From Religion, founded in 1978, is a self-declared “state/church watchdog and voice for freethought (atheism, agnosticism, skepticism),” the group’s website says.

“This is clearly illegal,” said Christopher Line, staff attorney for Freedom From Religion.

The prayers came to the Foundation’s attention when a parent attending a Valdosta Wildcats game heard the prayer over the loudspeaker and contacted the group, Line said.

The letter cites various court cases where public school systems have been ordered to cease supporting prayers at sporting events, even those which are student-led.

The school board only recently received the Foundation’s letter, said Gary Moser, attorney for the city board of education.

He said until the board decides what to do about the letter’s demands, he does not want to speak on the board’s behalf.

“These prayers have been going on for many, many years, and they’re not taking this lightly,” Moser said. “They want to do it right.”

Line said the Foundation is not considering legal action — yet.

“Most of the time, when we contact school boards about prayer situations and show them that what they’re doing is illegal, they take action to stop it,” he said.

The Foundation has brought lawsuits against school districts before, though not specifically about student prayers over speakers at athletic events, Line said.

If the school board chose to do nothing about the letter’s complaints, the Foundation would have to “look at all the facts” before taking the next step, he said.

In 2019, the Foundation sent a similar letter to the Lowndes County Board of Education, demanding an end to scheduling school prayers at games. Prayer was suspended at a single Lowndes Vikings game before the county board approved a policy allowing students to determine a presentation for pre-game activities, which could be religious or not, albeit with a disclaimer denying endorsement by the school board.