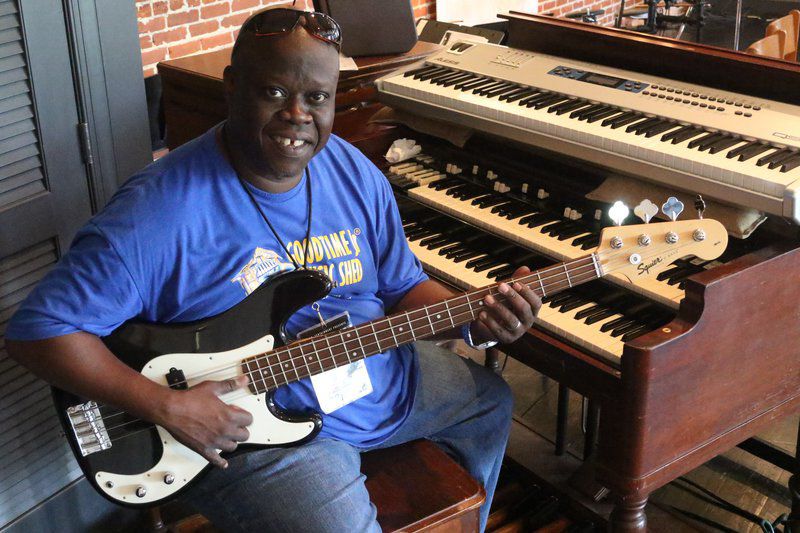 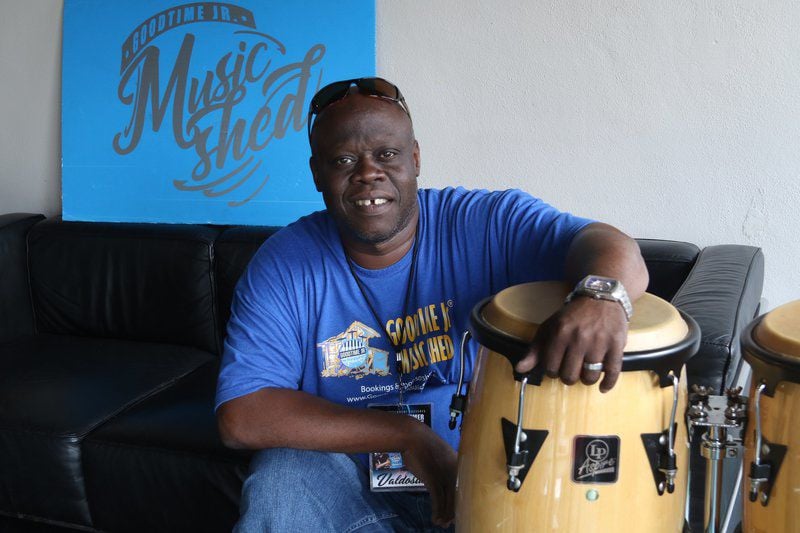 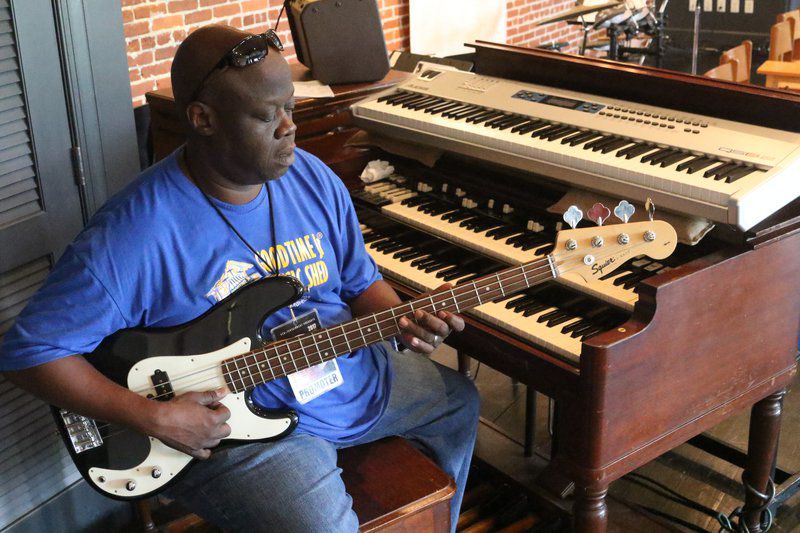 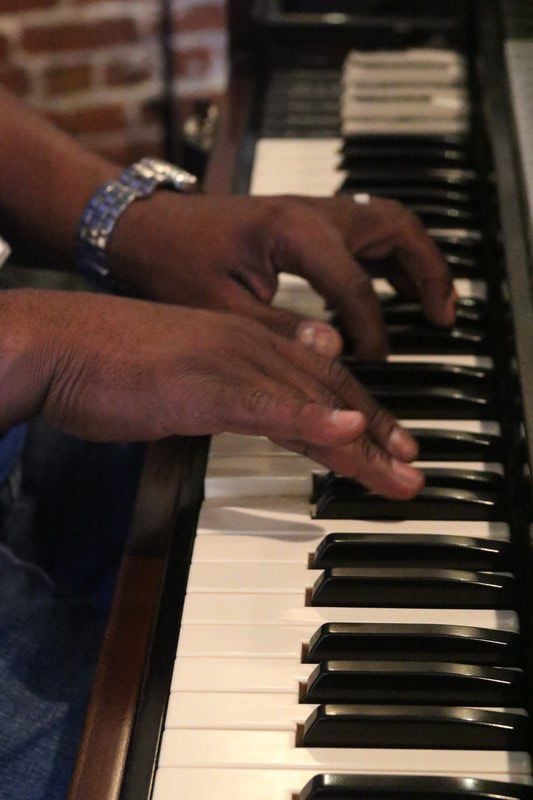 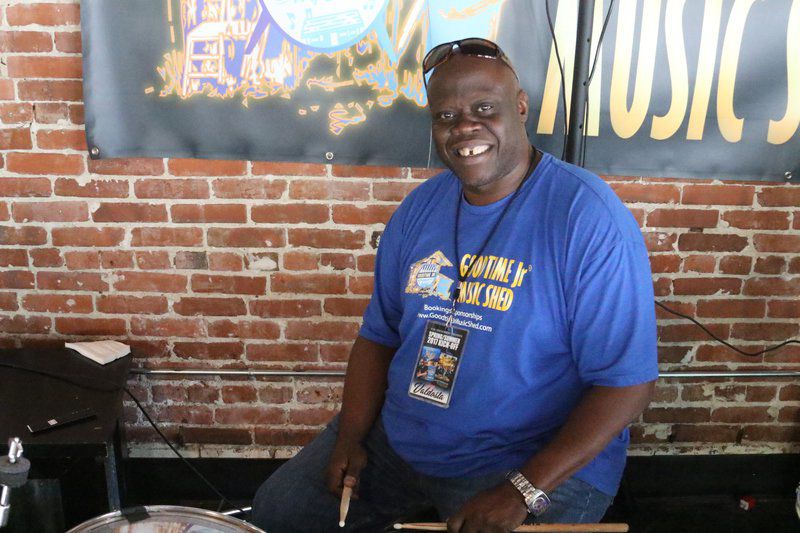 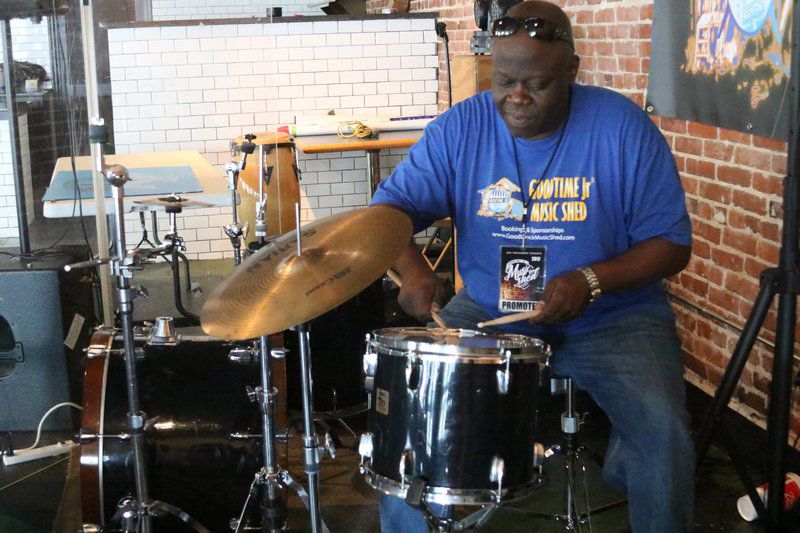 Amanda M. Usher | The Valdosta Daily Times Alphonso 'Goodtime Jr.' Johnson, owner of Goodtime Jr. Music Shed, was influenced musically by his parents. As a child, he was taught how to play the drums.

Amanda M. Usher | The Valdosta Daily Times Alphonso 'Goodtime Jr.' Johnson, owner of Goodtime Jr. Music Shed, was influenced musically by his parents. As a child, he was taught how to play the drums.

VALDOSTA – His fingers danced across the keys of the brown Hammond B3 organ, his favorite instrument.

His black shades atop his head, he bobbed to the tune of “When the Saints Go Marching In,” a song reminiscent of his gospel background.

And he did this in Christ the King Episcopal Church where he plays the organ every Sunday.

Christ the King Episcopal Church sits above the Music Shed in the same building.

Johnson allows artists to showcase their talents including singing, spoken word and songwriting at the Music Shed.

“It’s all about that stage,” he said.

The self-proclaimed “minister of music” helps up-and-comers shape their career by sharing wisdom with them and offering lessons at the Music Shed but Johnson said his 40-year career has been full of trials and errors.

The former Wildcat was born and raised in Valdosta. His dad, Bishop Alphonso Johnson Sr., was deemed “Goodtime Sr.” by others.

“Anytime they see my dad walk into a church, they knew they were going to have a good time so that’s how it all started,” Johnson said.

He said his dad was an energetic and vibrant man who could “teach and preach church.”

Both of his parents played guitar and heavily influenced him musically while also establishing Johnson’s church roots.

“The reason why I’m here today is because of my parents and that Goodtime legacy so that’s why I keep rolling on,” Johnson said.

The 51-year-old was trained to play the drums and guitar as a kid but can now play any instrument excluding the horns, he said.

Influences consist of Miles Davis and the country genre though Johnson has a love for all genres.

He said he enjoys the bass line, steel guitar and storytelling of country music though his playing style is of the jazz genre.

His accomplishments include winning the Louis Armstrong award for jazz at Valdosta High School. He played music for the 1996 Olympics.

Johnson’s music has traveled to places such as California and Chicago and internationally to Mexico and the Bahamas.

“Goodtime can go everywhere,” Johnson said. “Everybody loves to have a good time.”

He believes music is universal; being able to reach people from all walks of life.

“Music is just soothing. It’s heartfelt. … Music heals and I do realize that music can change people’s lives,” Johnson said.

A vessel for music, Johnson depicts himself not only as a musical director controlling traffic on a stage but also an artist.

“I manipulate tones and rhythms to the eardrums so that’s an art in itself,” he said.

Johnson has vowed to be a model for other artists and create a platform for their talents.

He wishes to be the man behind the scenes enhancing musicians.

“There’s a lot of talent in this region of Georgia that has not been tapped into,” he said.

Johnson is able to reach several people through radio station WGOV where he is an ambassador, the musician said.

Johnson takes his talents monthly to Food Truck Thursday downtown playing for patrons of various food trucks with staff of the Music Shed.

Showcases are hosted on the first and third Fridays monthly at the North Patterson Street venue.

Partnering with the American Cancer Society and the American Heart Association in Tallahassee, Fla., for a blood drive, Johnson said he plans to work with nonprofit organizations.

“I’m not bringing it from Genesis to Revelations like my dad but I’m bringing the music and the universe of music to the masses,” Johnson said.

He said though he’s not on the preacher’s stage, he is on the music stage where he’ll continue to be as he carries on the legacy of the love of music.