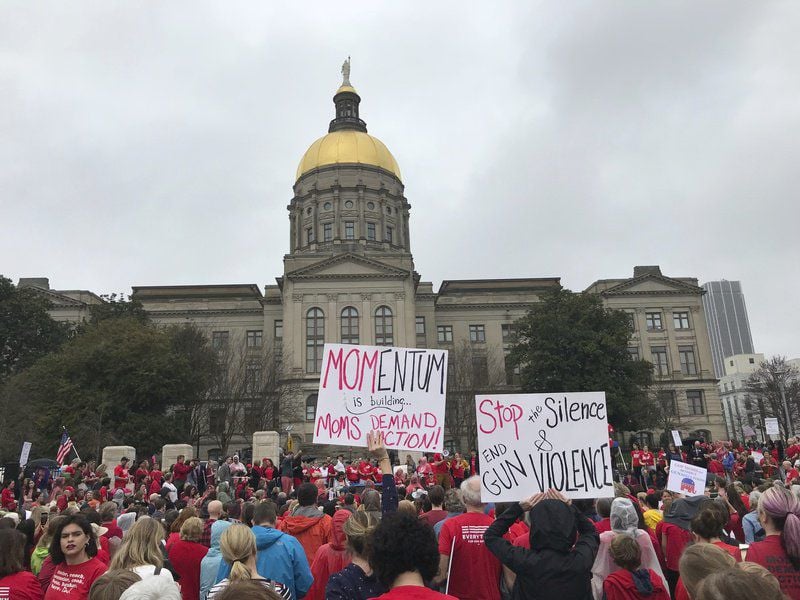 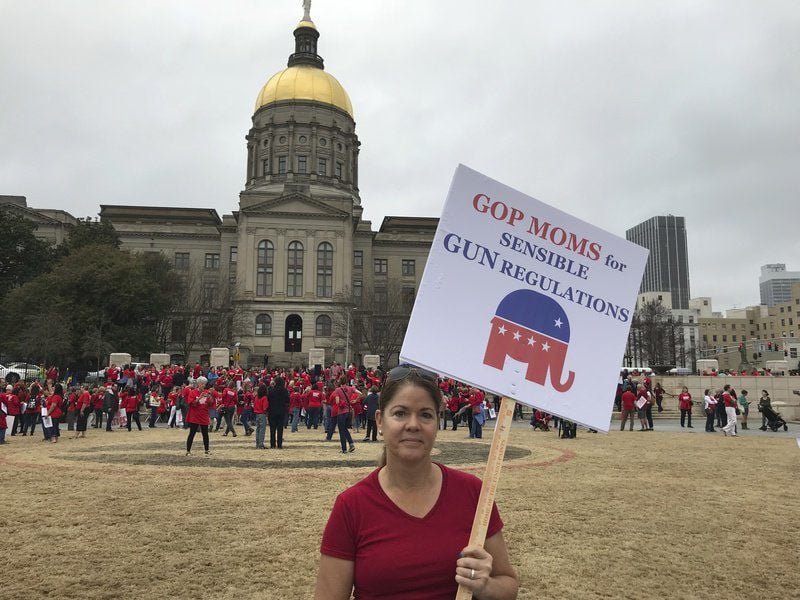 Jill Nolin | The Valdosta Daily TimesJeanne Menna, a gun owner and mother who lives in Kennesaw, said the recent school shooting in Florida moved her to attend the Atlanta rally Wednesday. 'I just couldn’t do nothing,' she said.

Jill Nolin | The Valdosta Daily TimesJeanne Menna, a gun owner and mother who lives in Kennesaw, said the recent school shooting in Florida moved her to attend the Atlanta rally Wednesday. 'I just couldn’t do nothing,' she said.

The rally was planned well before a 19-year-old allegedly killed his former classmates in south Florida, but rally organizers credit the shooting for the surge in attendance. About 1,500 showed up for the annual event organized by the Georgia chapter of Moms Demand Action for Gun Sense in America.

It was certainly the Florida shooting that prompted Jeanne Menna to show up with the attention-getting sign: “GOP moms for sensible gun regulations.”

“I’m worried about how much the NRA influences the Republican Party and our elected officials,” said Menna, a Kennesaw resident and a gun owner who said the Wednesday rally was a first for her. “And I think that they need to hear from voters like us who put them in office that we want some restrictions.

“We’re pro-Second Amendment, but we need to rein it in,” she added.

Menna said she considers requiring background checks for everyone and banning bump stocks to be among the reasonable gun regulations that should be pursued.

Republican President Donald Trump has said he is open to changes that would improve background checks and ban bump stocks, which was used in the Las Vegas shooting that killed dozens of people last year.

“We’re making progress, even in Georgia which is – as they like to say – a Second Amendment state,” Oliver said. “There are voters who care about reducing gun violence.”

In Georgia, advocates said they want state lawmakers to take action on several pending bills, including one that would prohibit domestic-violence offenders from owning a firearm.

“We can have common sense gun laws now or we can talk about it in November,” House Minority Leader Bob Trammell, D-Luthersville, said at the rally, referring to the general election.

Advocates were also there to voice opposition to bills that would expand Georgia’s gun laws, such as one that would allow Georgians to carry firearms without requiring a permit. Such proposals are not expected to go anywhere this session.

But so far, there has been little talk of guns under the Gold Dome this session, which is more than halfway through. Last year, a measure allowing guns on parts of college campuses dominated much of the session.

Advocates chanted “Not one more” and “Vote them out.” High school students were in the crowd carrying signs saying, “I don’t want to die” and “I shouldn’t be afraid to go to school.” One Atlanta mom gripped a poster board that said, “MOMentum is building.”

“We don’t want to see anymore of our peers slaughtered,” 22-year-old Mallory Harris, a student at the University of Georgia, said through a megaphone during a rally held in Liberty Plaza outside the Gold Dome.

Rep. Jason Ridley, R-Chatsworth, who has been a proponent of expanding the state’s gun laws, said the reaction to the recent school shooting has been different than in the past. The tone, he said, seems more “sensible.”

“I haven’t seen a lot of what we’ve seen before with the ‘Let’s ban guns,’” Ridley said Wednesday. “It’s almost like everybody wants to come to the table – Democrats and Republicans – and say, ‘Hey, how do we stop this?’”

Ridley personally favors looking at arming and training teachers on how to react in an active-shooter situation, should they volunteer for such a responsibility. But he said he sees no issue with calls to reevaluate bump stocks and background checks.