VALDOSTA – Mayor Scott James Matheson has responded to an ethics complaint filed against him, pushing back against his accusers and saying he’s done nothing wrong.

In a prepared statement issued this week, Matheson said the ethics complaint fails to cite one act he’s done that he thinks violated the city's code of ethics.

“The complaint states that I cannot serve as your mayor because I have a job as a radio talk show host and express opinions,” he said. “I have been a community talk show host for 19 years including the time when I was running for election as mayor.”

In the written statement, Matheson claims the complaint is merely an attempt by his accusers to use the ethics code to publicize political criticism and differences of opinion. It alleges the accusers don’t offer better ideas or advice to help city officials.

Matheson said his accusers “appear to be using their political views to divide our City and prevent all of us from working together for the common good,” adding, “I think this is wrong.”

Matheson said he plans to continue serving as mayor and, in his words, working for all Valdosta residents equally, and listening to their concerns.

A coalition of four organizations — the Mary Turner Project, NAACP Lowndes Chapter, Concerned Clergies of Valdosta and the Valdosta-Lowndes Community Alliance — filed the ethics complaint Feb. 15, saying, in part, the mayor would not listen to their concerns.  His accusers said he would not respond when they attempted to discuss the concerns alleged in the complaint.

The complaint, signed by Dr. Mark Patrick George, the Rev. Darren Neal, Dr. Bruce Francis and Jimmy Boyd representing the respective organizations, claims Matheson “demonstrated that he is incapable of, and/or uninterested in, representing all citizens of Valdosta equally” in presenting himself as the Valdosta mayor on his weekday radio show Talk 92.1.

It alleges the on-air rhetoric “regularly disseminates inaccurate, divisive, and inflammatory claims that often demonize local citizens and political viewpoints that differ from his own.”

The coalition has called for Matheson’s ouster, saying he violated ethics codes including:

— Failing to give the public “the appearance of being independent, impartial, and responsible to the people,” and failing to address “divisive” comments that reflect against the former.

— Failing to conduct himself “so as to not create any question or concern as to the appropriateness, legality or sincerity of any actions or conduct as a member of the governing authority.”

— Creating doubt in the ability to “provide the public with confidence in the integrity of its government.”

— Failing to use the “power of (his) position” for the “wellbeing of constituents.”

— Using rhetoric that fails to “create an environment of honesty, openness, and integrity.”

Matheson’s statement provided a list of ethics prohibitions for city officials to show the lack of violations.

City Clerk Teresa Bolden delivered the official complaint to the City Council and Matheson on Feb. 16. Both parties received electronic copies of the complaint but Matheson received a physical copy, too.

As the subject of the complaint, he was hand-delivered a copy to sign.

City Council is expected to review the ethics complaint at its Feb. 25 meeting. The meeting is open to the public.

Should City Council and Matheson have nominees in mind by the meeting, they will select board of ethics committee representatives to deliberate. 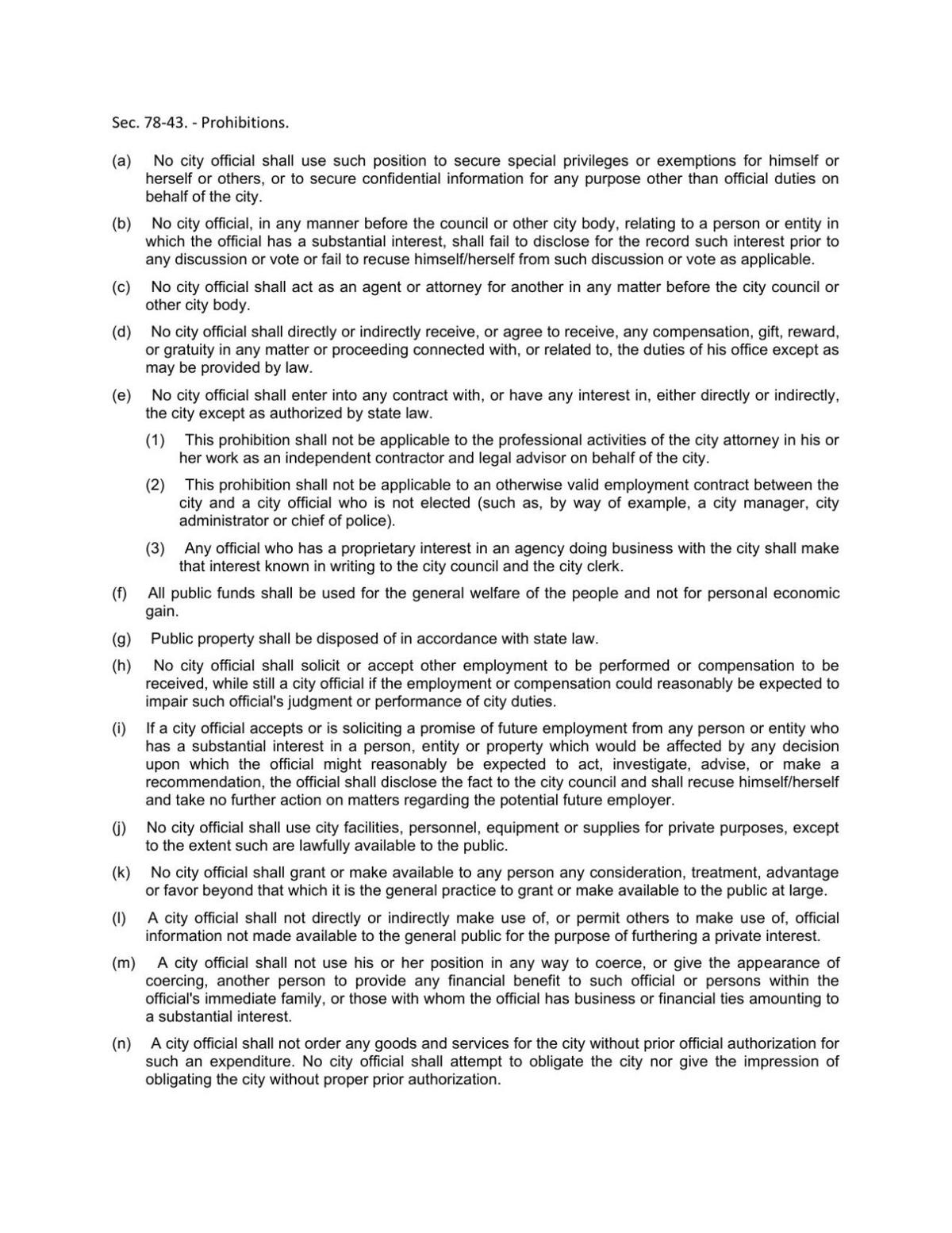