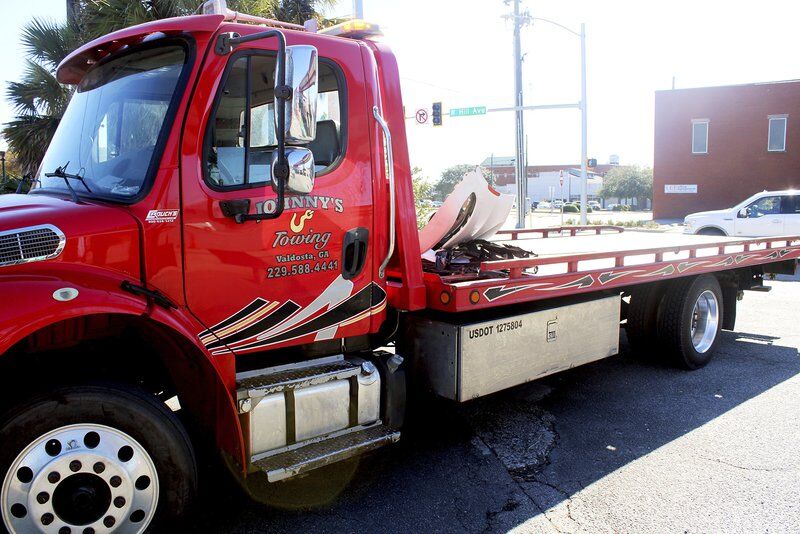 Terry Richards | The Valdosta Daily TimesPart of a wrecked police car rests on the back of a tow truck Tuesday after a chase. 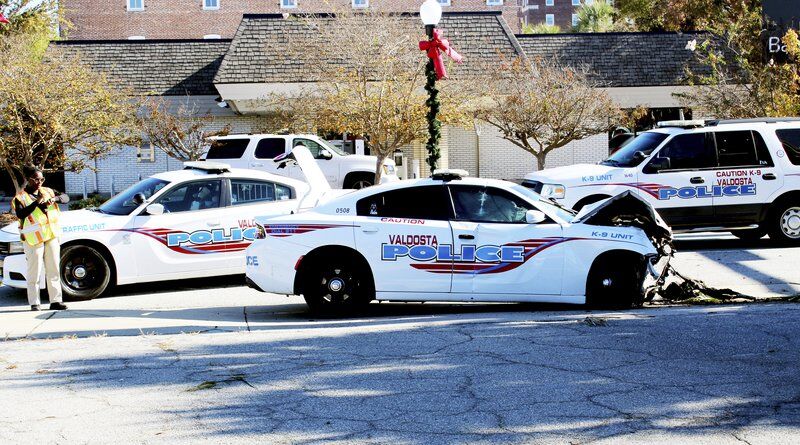 Terry Richards | The Valdosta Daily TimesPart of a wrecked police car rests on the back of a tow truck Tuesday after a chase.

VALDOSTA — A man wanted in Florida is now in the Lowndes County Jail following a chase Tuesday that wrecked a police cruiser.

Around 9:30 a.m., police responded to a store on Norman Drive after an employee called E911 about a suspicious customer, a Valdosta Police Department statement said.

The customer fled the store as officers were on the way; he pulled out of the parking lot in front of detectives in an unmarked car, the statement said.

The detectives tried to stop him, but he fled at high speed, running a red light at Norman Drive and West Hill Avenue.

A police K9 unit responded to the area of West Hill Avenue and found the suspect’s car heading toward an overpass at 80 mph. The K9 unit tried to catch up with him, but on reaching the downtown area the officer worked to avoid hitting another car, causing him to lose control and hit a tree.

The suspect hit two other vehicles at the intersection of Patterson Street and Hill Avenue; after wrecking, he fled on foot.

Officers in the area took him into custody at South Lee Street and Savannah Avenue.

The suspect was charged with felony theft by receiving stolen property, felony transportation of stolen property across state lines, fleeing and attempting to elude, driving on a suspended license and numerous traffic offenses, police said. He also had an active warrant out of Florida; the car had been reported as stolen during a carjacking, the statement said.

The officer who works with the K9 was taken to South Georgia Medical Center, where he was examined and released; his dog was checked out at Baytree Animal Hospital, where he was released as well.

“We are very thankful that the offender’s careless actions did not injure any of our citizens. His reckless disregard for others endangered many innocent citizens. I am proud of the work of our officers to ensure that he was taken into custody,” said Police Chief Leslie Manahan.