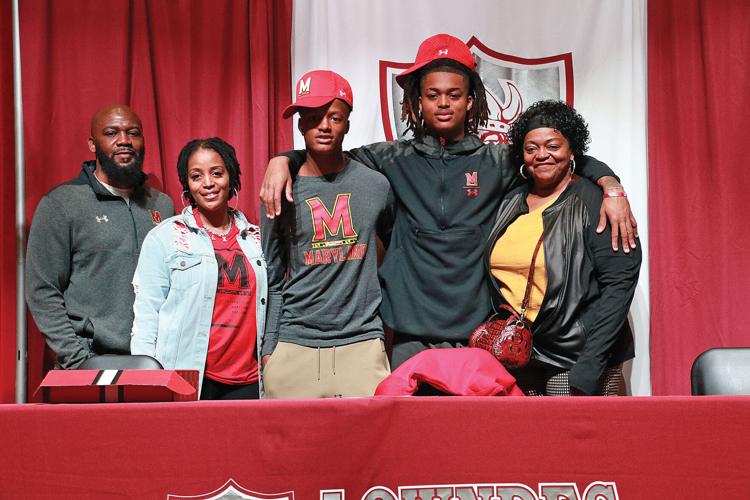 Lowndes senior Kevis Thomas stands with his family after signing with the University of Maryland Tuesday afternoon in the LHS Performing Arts Center. 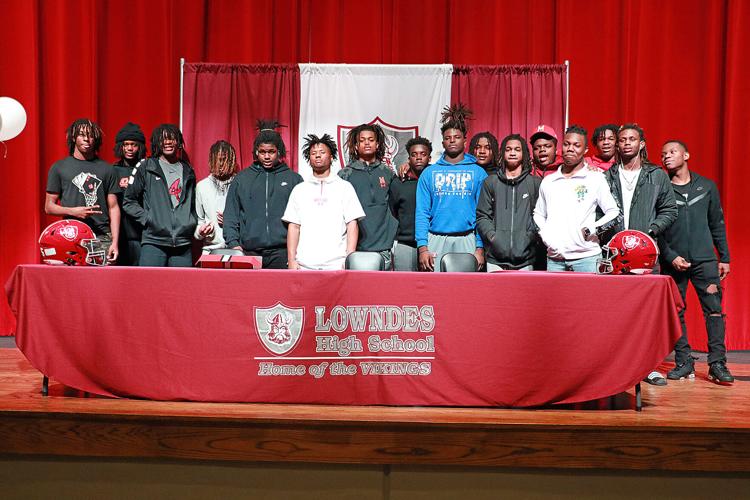 Lowndes senior Kevis Thomas stands with his teammates after signing with the University of Maryland Tuesday afternoon in the LHS Performing Arts Center.

Lowndes senior Kevis Thomas stands with his family after signing with the University of Maryland Tuesday afternoon in the LHS Performing Arts Center.

Lowndes senior Kevis Thomas stands with his teammates after signing with the University of Maryland Tuesday afternoon in the LHS Performing Arts Center.

Once he enrolls in the summer, Thomas plans to major in business or real estate.

“It means a lot to me. I feel like I’ve kind of met part of my goal, but I haven’t met fully,” Thomas said. “To make my family happy, myself happy to know that I can do it and see that it’s there means a lot to me. I’m just going to keep working until I finish.

“When I went on my visit, Maryland was the one out of all of the early visits I went on. The defense they run, there’s five DBs on the field at one time so that’ll help me get playing time. The scholarship they offered me, the coaches are real, my family loved it, I felt safe there and it was an easy decision. It was done.”

A former quarterback who played his freshman and sophomore years at Taylor County, Thomas was a productive passer – throwing for 3,430 yards in his first two seasons with 25 touchdowns and 20 interceptions. He was also a standout rusher as he rushed for 1,238 yards and 15 touchdowns as a sophomore.

Upon his arrival at Lowndes, the 6-1, 185-pound Thomas quickly made the transition from a dual-threat quarterback to wide receiver and extended his skills to the defensive side of the ball to play cornerback.

Playing primarily wide receiver as a senior, Thomas caught 22 passes for 427 yards and three touchdowns in nine games for the Vikings. Thomas also excelled as a kickoff returner with 16 kickoff returns and five punt returns for 497 yards and two touchdowns. His versatility resulted in him being named a First Team All-Region selection.

Playing cornerback as a junior, Thomas recorded 25 tackles, one tackle for loss and one interception for 40 yards.

Despite his moves from one side of the ball to the other, Thomas still sees himself as a quarterback – just one that plays multiple positions.

“I’m actually a quarterback, so being a quarterback playing DB is kind of easy being on and off the field,” Thomas said. “I feel like I have an advantage over some other corners.”

“When I got here, just seeing the place, I kind of felt like it was the right decision,” Thomas said of transferring to Lowndes after his sophomore year. “It’s as close to a college experience as you’re gonna get as far as eating, working out, film, practice. You’re on a tight schedule. It’s not like you can miss a day. There’s punishment, so you don’t want to miss anything. I feel like that’s good preparation for where I’m headed.”

The Terrapins went 8-5 this past season under head coach Michael Locksley.

Thomas, who will play cornerback at Maryland, admits he felt right at home when he met with the rest of the staff – particularly cornerbacks coach Henry Baker.

“I feel like we’re all cool,” Thomas said of his conversations with the Maryland coaching staff. “They’re straightforward coaches. I feel like I can talk to them about anything. Right now, I can hit them up and the connection between me and Coach Baker and then Coach Baker and the other staff, I feel like all of them kind of relate as one bond and they all give off the same type of energy. I feel great about my decision.”

The Vikings finished 5-6 last season under first-year coach Zach Grage. After the team’s 38-14 loss to Carrollton in the first round of the state playoffs, the Vikings fired Grage and replaced him with former Grayson head coach Adam Carter.

In perhaps the Vikings’ biggest win all season, they dispatched Carter’s heavily-favored Rams 24-14.

Carter, who was introduced as Lowndes head coach Jan. 5, remembers the impact Thomas had as he watched from the opposite sideline.

In that game, Thomas caught three passes for 97 yards along with 48 kick return yards, four tackles and one pass breakup.

“I personally haven’t gotten a chance to coach you, but I coached against you,” Carter said to Thomas during the ceremony. “You’re a heck of player, man. Good luck to you and your family. This is a great accomplishment and everyone in the Lowndes family is very proud of you. Maryland’s getting a good player. Congratulations.”