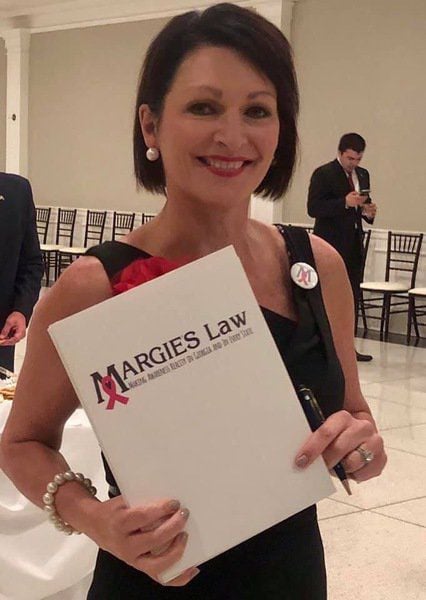 Submitted PhotoMargie Singleton is the inspiration for Margie's Law that requires health practitioners inform women with dense breast tissue that it can be more difficult to detect cancer through a mammogram and that additional tests may be needed. 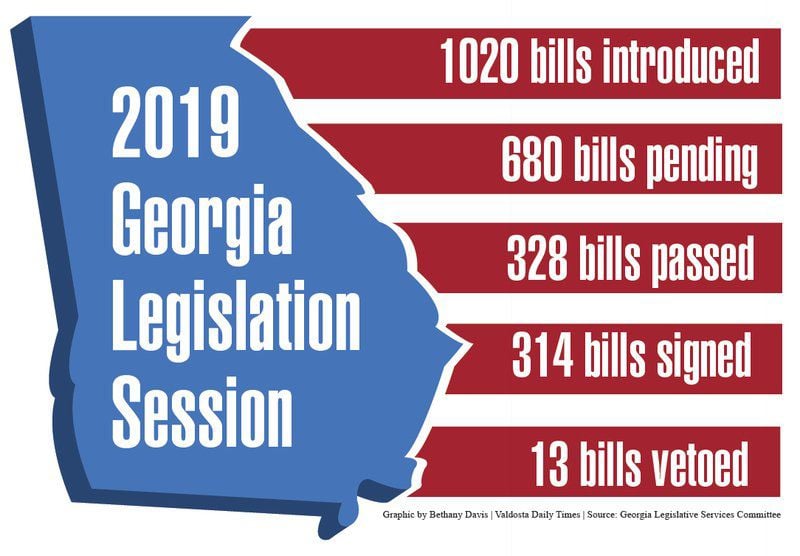 Submitted PhotoMargie Singleton is the inspiration for Margie's Law that requires health practitioners inform women with dense breast tissue that it can be more difficult to detect cancer through a mammogram and that additional tests may be needed.

ATLANTA – The minimum age to marry in Georgia is about to become 17, up from 16. Anyone who tries to sic law enforcement on another person – a prank known as “SWATing” – will face serious penalties. And blind Georgians will now be protected from discrimination in child custody battles.

Public schools will also be required to post signage about reporting suspected child abuse. And military service members can be freed from their local gym contract, and other such obligations, when deployed.

These are among the new laws that take effect July 1 in Georgia, a time when a slew of measures will go on the books.

‘It could have been caught’

Margie Singleton has had six rounds of chemotherapy, 25 rounds of radiation and a double mastectomy with reconstruction, and she will take a chemo pill every day for at least the next five years.

The 46-year-old Pooler resident, who is now in remission, said she is thankful for her life, but she’s frustrated: Her breast cancer likely went undetected on a mammogram just six months before she was diagnosed with stage 2B breast cancer.

“I felt like I lost a whole year of my life basically, going through all that,” Singleton said. “I am just getting back to me and being able to enjoy life again.”

Singleton said she started faithfully going in for an annual mammogram when she turned 40, and when she felt a lump on her breast two years ago, she went in for another one. The results came back normal.

Six months later, she felt a lump on her other breast. This time, Singleton, who works in the medical device industry, asked a surgeon she knew for his opinion. He urged her to have another mammogram, as well as an ultrasound, done that day.

This time, the ultrasound picked up on the cancer.

The reason her cancer wasn’t caught sooner? Singleton has what’s known as dense breast tissue, just like half of all women do.

“It makes it extremely difficult for the radiologist to detect cancer,” said Rep. Sharon Cooper, a Republican from Marietta who chairs the House Health and Human Services Committee. “It’s sort of like looking through a very dense forest.”

Cooper sponsored a measure that, starting next month, requires health practitioners to inform women with dense breast tissue that it can be more difficult to detect cancer through a mammogram and that additional tests may be needed.

This new law – known as Margie’s Law in honor of Singleton – also requires health-care providers to notify these patients that dense breast tissue may also increase their risk for developing breast cancer.

“There’s no doubt in my mind – had people been educated on this, it could have been caught,” Singleton said of her own cancer.

Georgia joins more than three dozen states that require women be informed if they have dense breasts, and the U.S. Food and Drug Administration is in the process of setting a minimum standard for such notification nationwide. It would be the first update of federal mammography regulations in two decades.

Meanwhile, Singleton has rallied a group of women known as Margie’s army to educate others, including legislators, about dense breast tissue.

“Demand from your practitioner an ultrasound or MRI if you have dense breast tissue. Period. Do not settle for just a mammogram,” Singleton said.

“Educate yourself. Be your own advocate. Don’t assume that the doctors know everything.”

‘This is about slum landlords’

A young woman had just started a new business and found a rental home she could afford with her fluctuating income. She moved in under a month-to-month arrangement.

Then the rain came and flooded the basement, where her gas water heater was located. The gas had to be turned off.

When she contacted her landlord, she was stunned when he told her to wait for the water to dry on its own and then have the gas turned back on. But she knew that other tenants who had pressed the same landlord for fixes were not around for long, and she couldn’t afford to move again.

So the Bibb County woman reached out to the Georgia Legal Services Program, which is a non-profit law firm that runs an eviction prevention project focused on several counties around the state, including Whitfield County.

Tenants typically have a few options, said Susan Reif, who oversees the project and shared the woman’s story as an example of a case the group had handled.

They can either file a complaint with the local code-enforcement office, they can go through the tedious process of what’s known as “repair and deduct,” or they can contact an attorney. Reif stressed the importance of Georgia tenants being current on their rent payments, no matter how frustrated they become.

But those living without the security of a long-term lease agreement can be particularly vulnerable.

“We are having to ask tenants to choose between having a place to live or taking the risk of requesting a repair and then having no place to live,” Reif said. “And people shouldn’t have to choose that.”

Starting next month, tenants won’t have to weigh those options. A new law bans landlords from retaliating against residents who seek repairs, file a complaint with local code enforcement or join a tenant organization.

Specifically, the landlord would be penalized for responding with an eviction, a rent increase or other actions meant as a rebuke. Most of the country already has a similar law on the books.

“This is about slum landlords. Let’s just get right down to the facts,” Cooper, the Republican lawmaker, said pointedly to her colleagues during the session.

Cooper, who also sponsored this measure, said some renters are stuck living in properties with rampant mold and infestations of rats and insects. If they complain, the landlord just finds another tenant.

Either way, the instability and the unhealthy conditions can cause children to miss school, lessening their chances of ultimately graduating from high school, Cooper said.

But several of Cooper’s colleagues were concerned the measure went too far. Rep. Jason Ridley, a Chatsworth Republican who voted against it, said he thinks the courts do an adequate job sorting out disputes between landlords and tenants.

“We don’t need to be getting involved in an agreement between a landlord and rental person who agreed to sign the lease,” Ridley said.

The bill had the backing of advocates for children and the Georgia Municipal Association, which saw an opportunity to incentivize property owners to comply with building codes and opt for regular property inspections.

In Moultrie, officials recently stepped up efforts to use the most powerful tool available to a city: its code-enforcement office. That initially sparked an outcry among a small group of resistant property owners, City Manager Pete Dillard said.

City officials eventually agreed to a compromise: Instead of inspecting rental properties every time the electricity was turned back on, as they originally set out to do, they will do an annual inspection. Dillard said he has seen an improvement in the quality of the local housing, which is important for local property values and to help attract developers.

Dillard said he had heard rumors about tenants who stayed silent about their living conditions for fear of being kicked out.

“I know of no cases where that was done, but you’re talking about people on the lower economic scale,” Dillard said, adding that tenants with a past criminal record may also be vulnerable.

“And laws like this protect those people,” he said, referring to the new anti-retaliatory law. “Everybody deserves to be treated fairly.”

Law-enforcement agencies will soon be required to save evidence collected from sexual assaults for as long as 50 years.

Today, they are only required to preserve the evidence for a decade.

A new law that takes effect July 1 requires hair samples, fluids and other biological material gathered through what’s known as a rape kit be saved for 30 years from the date of an arrest or seven years after a completed sentence, depending on which comes later.

If there is no arrest, the evidence will be kept for five decades.

“When I’m thinking about valuable evidence, I’m going to keep it until I solve the case,” he said.

“The DNA database is getting bigger and bigger,” Paulk said. “Everybody’s collecting DNA now, so you never know when you’re going to get a hit.”

The same goes for the Dalton Police Department, which currently has 53 sexual assault kits in evidence.

“Anything that eventually one day could solve a crime – and certainly in this case we’re talking one of the most heinous crimes there is – is a good thing,” said Bruce Frazier, the department’s spokesman.