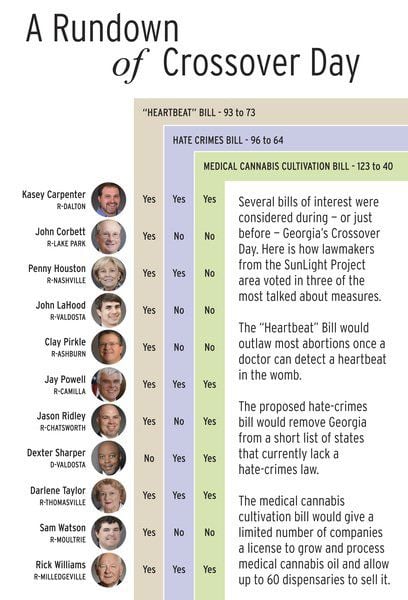 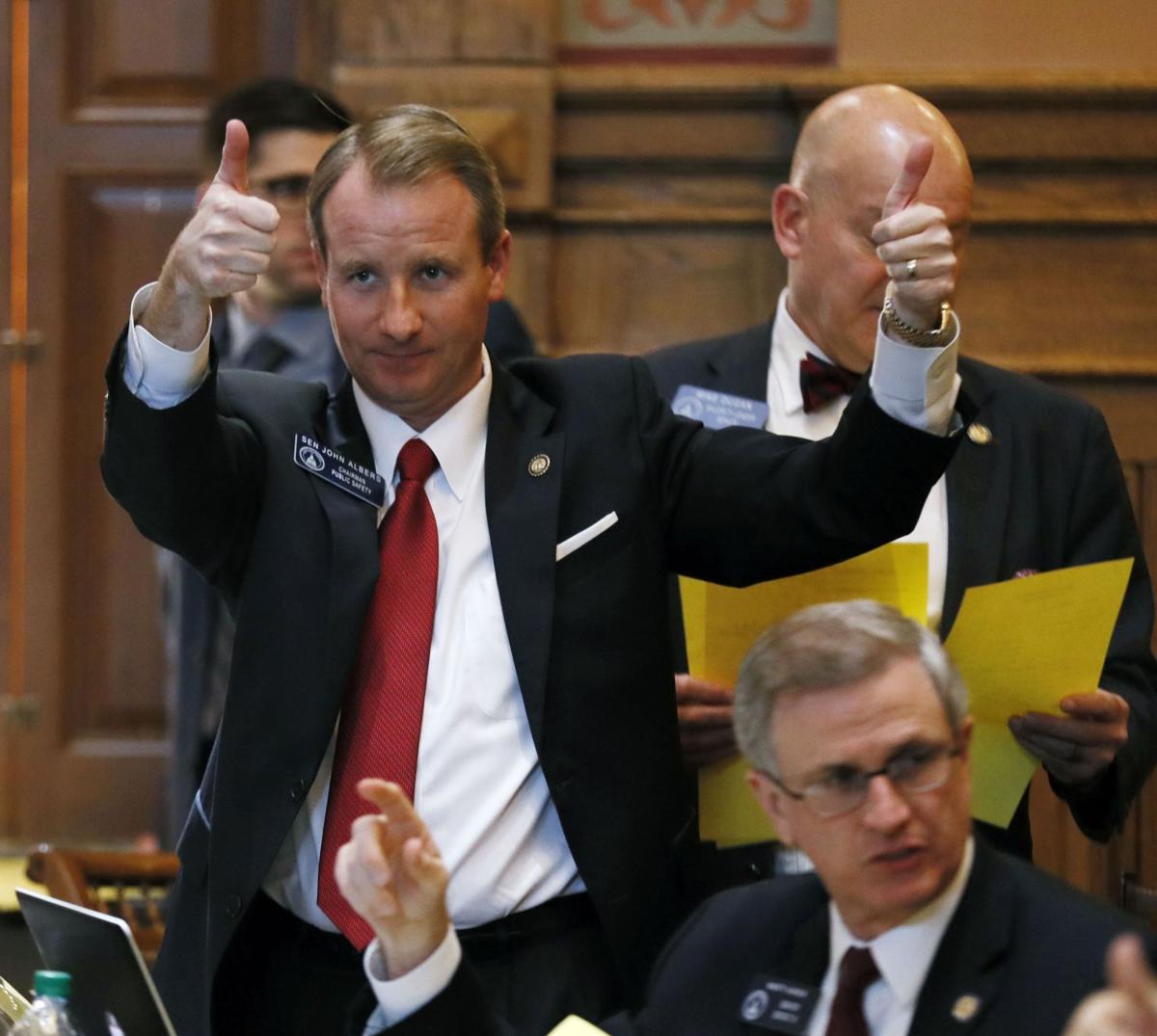 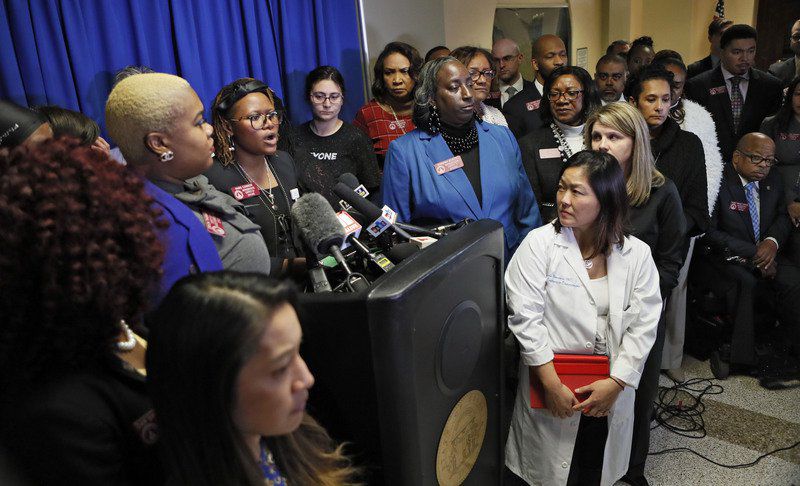 Bob Andres | Atlanta Journal-Constitution via APOpponents to House Bill 481 hold a press conference led off by Rep. Park Cannon, D-Atlanta. The bill would severely restrict abortions. The legislature was in session for ‘crossover’ day, the 28th day of the 2019 General Assembly.

Bob Andres | Atlanta Journal-Constitution via APOpponents to House Bill 481 hold a press conference led off by Rep. Park Cannon, D-Atlanta. The bill would severely restrict abortions. The legislature was in session for ‘crossover’ day, the 28th day of the 2019 General Assembly.

ATLANTA — Georgia lawmakers passed a long-awaited hate-crimes bill that covers sexual orientation, and then they passed another measure that would ban abortions as early as six weeks into a pregnancy.

Both measures squeaked by after hours of emotional debate under the Gold Dome and are now in the Senate.

The bills were among dozens considered in each chamber leading up to a key deadline called Crossover Day, when a bill is required to clear one chamber to stay alive for the year.

The surviving measures now have a little more than two weeks to garner final passage, as both chambers gear up for the final days of an eventful legislative session.

So far this year, lawmakers have already signed off on new voting machines and they have opened the door to the cultivation of medical cannabis as a way to provide access to an oil that is currently legal to posses in Georgia but illegal to acquire.

They have started a push for a long-resisted waiver that would give Georgia more flexibility in how it uses its federal Medicaid dollars, making way for a potential partial expansion.

And they have initiated a rewrite of Georgia’s abortion law as lawmakers advance a bill that would ban the procedure once a doctor can detect a heartbeat in the womb, or as early as six weeks. Today, an abortion can be performed in Georgia until 20 weeks.

The so-called “Heartbeat bill” has sparked hours of testimony and passionate debate since it emerged from a committee the night before Crossover Day.

“Our freedom of speech is valued above all. We can demand to have our say, and we do,” Rep. Darlene Taylor, a Thomasville Republican, said during a speech in favor of the anti-abortion measure. “But who speaks for the baby named Fetus? Well, today I’m going to.

“To quote baby Fetus, ‘I deserve to have the right too. … You know in your heart, I am life,’” Taylor said, speaking as a fetus. “‘My life counts. If you don’t want me, someone does. We are a nation hungry for babies to adopt. Someone wants me.’”

At that point in the evening, several Democrats had already stood up and turned their backs to the main sponsor of the measure, Republican Rep. Ed Setzler, as he spoke. One Democrat, Rep. Renitta Shannon, would later refuse to leave the well when her time to speak was over and had to be physically escorted away.

Democrats argued the measure is unconstitutional and will cause the state to rack up costly legal bills trying to defend it in court. They said the move would take away a woman’s ability to make her own health-care decisions in a state that grapples with high rates of maternal mortality – or worse, drive desperate women to seek dangerous alternatives.

In the bill, the only exceptions would be to save the life of the mother or if the fetus is deemed “medically futile” or in the case of incest and rape – if there is a police report to accompany the claim.

The measure narrowly passed the House with a 93-to-73 vote and is now in the Senate, where state senators started hearing testimony this week. Nearly all of the state representatives in the SunLight Project areas supported the bill in the House.

“I am proud that the House acted in a deliberate way to protect the unborn and passed the nation’s strongest pro-life protections,” Rep. John LaHood, a Valdosta Republican who voted in favor of the measure and who served on the committee that advanced the bill, said in correspondence sent to his constituents.

Lawmakers also narrowly passed a bipartisan measure that would remove Georgia from a short list of states without a hate-crimes law on the books.

The measure would create tougher penalties for defendants who target their victim for any of these factors: their race, color, religion, national origin, sexual orientation, gender, mental disability or physical disability.

Georgia is currently one of five states without a hate-crime law, although the state had a law in place until a judge ruled it unconstitutionally vague several years ago. Proponents argue that it’s time to fix that.

“Throughout history, we have seen how hate can be used as a powerful tool,” said Rep. Chuck Efstration, a Republican from Dacula, who is the bill’s sponsor.

The proposal cleared the house with a 96-to-64 vote, with a handful of lawmakers in the SunLight Project area opposing the measure.

Some opponents voiced concern about how such a law would be applied and questioned whether hate-crime laws effectively put more value on one life over another.

Milledgeville’s state senator is at the center of a controversial measure that would empower the state to seize control of Georgia’s economic powerhouse: Hartsfield-Jackson Atlanta International Airport.

Citing a string of scandals, Sen. Burt Jones, a Republican from Jackson, is the sponsor of a bill that would put the city-run airport under a newly created state authority.

Jones has built his case for the airport takeover on such headlines related to an ongoing federal corruption probe, although Jones also pointed to news reports going back decades. He led a study committee last year that backed the plan.

The measure would take effect in 2020, unless the city agrees to enter into a joint-governance agreement with the state before then.

That doesn’t seem likely to happen. Atlanta Mayor Keisha Lance Bottoms adamantly opposes the measure, comparing it to an act of war.

Jones’ proposal cleared the Senate on Crossover Day after a lengthy and tense debate in the state Senate.

The 34-to-22 vote mostly fell along party lines, with Democrats arguing the divisive measure could open other local entities to state takeover and was really driven by a desire to create access for the proponents’ favored vendors.

All of the SunLight Project area lawmakers – Sen. Ellis Black of Valdosta, Sen. Dean Burke of Bainbridge, Sen. Greg Kirk of Americus and Sen. Chuck Payne of Dalton, all Republicans – voted in favor of it. The proposal is now in the House, where the leadership has expressed wariness toward the proposition.

Dead for the year?

What is also notable about Crossover Day are the dozens of bills that fizzled.

A proposed tax on books, music and digital downloads and a plan to put casino gambling on the ballot were among the bills that lost steam this year.

But one of the surprises of the legislative session so far is the rejection of a measure that would allow taxpayer dollars to go toward private school tuition, home school materials, tutoring or other educational costs outside of public education.

But under the failed proposal, any unfilled slots would be more broadly available to students who have recently left a public school.

Proponents argue parents should be able to pick a learning environment that suits their child.

“Our goal is not simply to send children to school,” Dolezal said. “Our goal is to educate children, and what this bill captures is the idea that students and parents know what is best for that student.”

Critics argued the move would eventually divert hundreds of millions of dollars from public schools.

The proposal narrowly lost in the Senate with a 28-to-25 vote. The SunLight Project area’s South Georgia senators, including Black, Burke and Kirk, contributed to that stunning defeat.

But of course, bills are never officially dead for the year until the clock expires on the final day of the session on April 2.