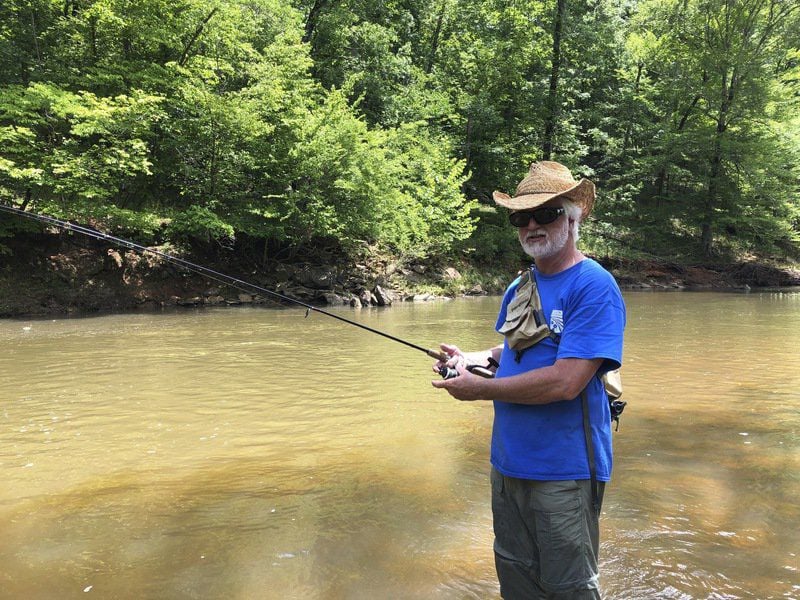 Jill Nolin | The Valdosta Daily TimesGordon Rogers, who is the Flint Riverkeeper, fishes for shoal bass in the Flint River. 'The free-flowing river – that’s the agenda,' Rogers said. 'Free-flowing water because critters like the shoal bass need to be moving up and down it.' 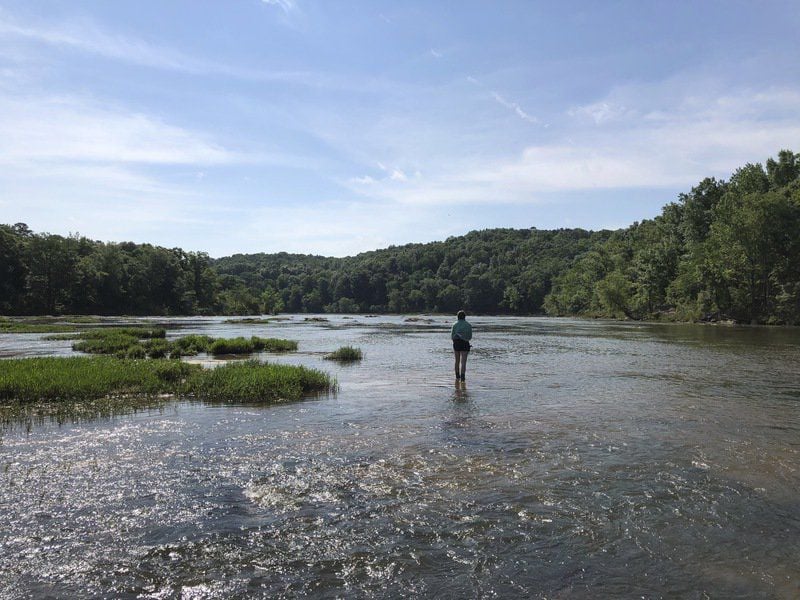 Jill Nolin | The Valdosta Daily TimesJamie Rogers, whose father is the Flint Riverkeeper, fishes for shoal bass along an isolated stretch of the Upper Flint River. 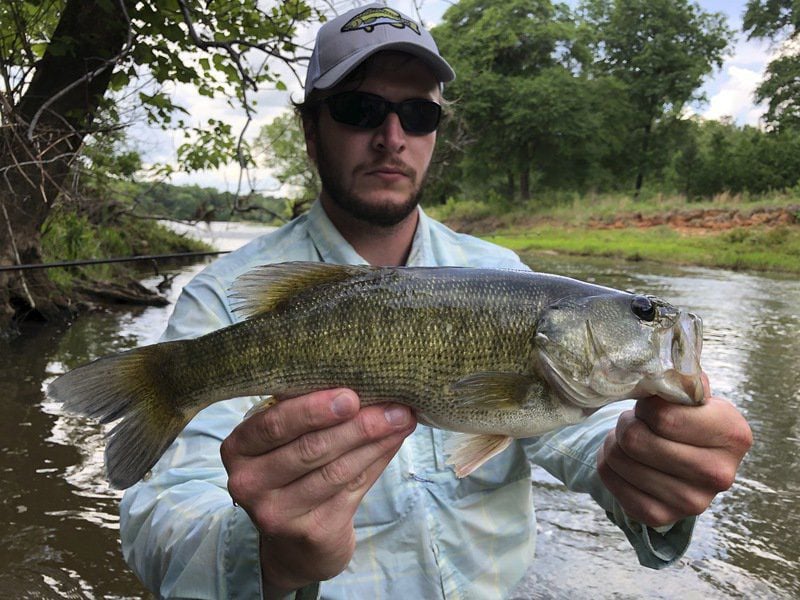 Jill Nolin | The Valdosta Daily TimesQuint Rogers holds up a shoal bass he caught in the Upper Flint River in May. A proposal would name the shoalie Georgia’s official native riverine sport fish.

Jill Nolin | The Valdosta Daily TimesGordon Rogers, who is the Flint Riverkeeper, fishes for shoal bass in the Flint River. 'The free-flowing river – that’s the agenda,' Rogers said. 'Free-flowing water because critters like the shoal bass need to be moving up and down it.'

Jill Nolin | The Valdosta Daily TimesJamie Rogers, whose father is the Flint Riverkeeper, fishes for shoal bass along an isolated stretch of the Upper Flint River.

Jill Nolin | The Valdosta Daily TimesQuint Rogers holds up a shoal bass he caught in the Upper Flint River in May. A proposal would name the shoalie Georgia’s official native riverine sport fish.

TALBOTTON – Quint Rogers stood in waist-high water, casting his line into a deeper pocket of the Flint River.

He was steadily pulling his line back in when it happened: A mighty tug jerked on the other end, beginning a thrilling tussle that is increasingly luring people to remote areas of Georgia for an encounter with a feisty shoal bass.

“He crushed it,” Rogers yelled back to his dad, Gordon Rogers, as he waded over to show off his gill-flaring catch before gently letting it swim free.

The shoal bass – more affectionately known as the shoalie – wasn’t the only fish caught that day as the Rogers walked gingerly along rocky, often-slippery riverbeds and traversed swift currents to reach the more favorable fishing holes of this isolated stretch of the Flint.

They also snagged several spotted bass, which is considered an interloper here, and a long-nosed, toothy fish called a gar that looks like it flopped in from prehistoric times.

But in this river, the shoal bass is the star.

That’s why there is a movement to crown the species – a fish that, with the exception of a Florida river, is now only found in Georgia streams – as the state’s official native riverine sport fish.

“It’s the quintessential Georgia fish. Georgia’s the only place that you would go in the whole world to catch a six-pound shoal bass,” said Steven Sammons, a researcher with Auburn University’s School of Fisheries, Aquaculture and Aquatic Sciences. “Truly, to me, it is the Georgia fish.”

After years of trying, the shoal bass nearly clinched the coveted title this legislative session, but the proposal’s backers had to cut bait after some last-minute opposition surfaced.

The shoal bass, which became its own species just two decades ago, has been gaining in popularity for years.

A growing number of kayak anglers have been pursuing a fish that tends to lurk behind rocks in the spring, returning to these familiar waters to reproduce. Other times of year, the tiger-striped fish’s whereabouts can be tougher pin down, with the shoal bass known to travel as far as 160 miles.

“They don’t live in ugly places,” Allen Ragsdale, a fishing guide who runs Fall Line Guide Serve in Thomaston, said of another aspect of the shoalie’s appeal. “The places you catch them in are some of the more scenic areas in Georgia.”

A South Georgia brewery, Pretoria Fields, has already honored the fish with its own IPA, called “Shoalie.” A portion of the proceeds goes back to protecting the Flint River and its tributaries. A tagline says it all: “No dams given.”

“They’re incredibly fun to catch,” said Tripp Morgan, the Albany brewery’s founder who said the beer’s name is meant to promote the state’s natural resources. “They pull. They fight like a wild fish. They’re just a fun game fish.”

But a state designation has eluded the shoalie for a few years now.

Rep. Debbie Buckner, a Democrat from Junction City, said she sees the proposal as a way to help small, rural businesses in an area with few other economic opportunities cultivate a tourism economy centered on the quaint fish.

A handful of fishing guides devoted to escorting visitors to shoalie hotspots already exist. Buckner said she also sees an opportunity for restaurants and lodging to benefit from an influx of visitors.

Buckner’s proposal nearly passed this year, but opposition from one North Georgia state senator, Bill Heath, caused the provision to be very publicly cut from a larger bill as the clock expired on this year’s legislative session.

When asked why he objected to the designation, the Bremen Republican said he saw the proposal as “not germane to the issues” in the broader bill. Buckner’s proposal had been tacked on to a bill that included various changes to the state’s hunting and fishing law.

Heath also noted the proposal had not cleared the House this year, although it was unanimously approved in that chamber the first time it was proposed in 2016.

“I didn’t feel it was appropriate to include in the bill,” Heath said in a statement.

He did not respond to a follow-up question asking whether his concerns extended beyond procedural issues.

Buckner said she will recast the proposal next year and hopes the attention will help buoy her chances. She has support from key players on the other side of the aisle.

“We’re going to do our best to get it done this next time,” said Rep. Trey Rhodes, a Republican from Greensboro who chairs the House Game, Fish and Parks Committee, which handles hunting and fishing bills.

Georgia lawmakers have bestowed such fishy honors on recipients in the past. The large-mouth bass – which is also a state symbol in Florida, Alabama and Mississippi – was named Georgia’s state fish decades ago in honor of the world record set here in 1932.

“Why in the world we can’t get the poor ol’ shoal bass named as the state riverine fish I don’t understand,” said Mike Worley, who heads the Georgia Wildlife Federation, noting that some state symbols – such as the honeybee and the Cherokee rose – are not native to Georgia.

All this fuss isn’t just about a fish.

In the shoal bass proponents see a lovable champion – a kind of co-advocate – for a river that has been at times considered threatened.

It’s been about a decade since some state leaders tried to dust off old plans to build reservoirs along the Flint River to address the state’s water crisis. But Gordon Rogers, who is the Flint Riverkeeper, said he doubts Georgians have heard the last of it.

“I think every other generation is probably going to have to fight that,” Rogers said.

More recently, the Flint River has become a focal point of the ongoing water wars, with Florida accusing southwest Georgia farmers and Atlanta homeowners and businesses of overusing water. The Flint begins near the Atlanta airport and eventually feeds into Florida’s Apalachicola River.

Rogers has pushed for alternative approaches to resolving the region’s water woes. He cited a metro Atlanta county’s recent decision to return water to the Flint River – water that has not flowed back into the river in decades – as an example that will help boost the river’s flow.

So, what does all this have to do with the shoal bass?

The shoal bass lives in fast-moving waters and is unique among its bass brethren because of its penchant for long-distance travel.

The Flint River, which runs through vast swaths of sprawling forestland, is one of just three dozen rivers in the country that flow for more than 200 miles unimpeded. That has given the shoalie plenty of room to roam.

“The free-flowing river – that’s the agenda,” Rogers said. “Free-flowing water because critters like the shoal bass need to be moving up and down it.

“We like the way these shoals sound. We like the cleansing effect that they have versus a cesspool that’s something that would be sitting dammed up downstream of Atlanta,” he added. “This river is serving a kidney function, and doing it quite well.”

The shoal bass is abundant in the Flint, but it hasn’t fared as well in parts of the Chattahoochee River, which has several dams. And it has been wiped out in Alabama in the last decade, vanishing from the Chattahoochee’s tributaries there. It can be found in Georgia’s Ocmulgee River but is considered an invasive species there.

“The more we find out about them, the more we see how sort of finicky they are,” said Amy Cottrell, who is a fisheries biologist with the state Department of Natural Resources.

“They’re very system-specific and so it seems like there are a lot of things that they rely on that are in one system that may not be in system two. It’s difficult to manage an organism that acts that way.”

‘Last bastion of the shoal bass’

Ragsdale, the fishing guide, said he is happy to see a spotlight on the shoalie, but he worries about a possible downside: A potential spike in the number of people taking the fish home for supper.

Ragsdale said he hopes tougher requirements would follow any increased hype over the shoal bass so that anglers will continue to find large shoalies on the end of their line.

“It can be kind of a double-edged sword,” Ragsdale said of the proposed state designation.

Cottrell said it is also important to have enough older, bigger fish around to reproduce and raise enough young fish.

Sammons, the Auburn University professor, conducted a study about eight years ago that found about 25 percent of the shoal bass caught were killed. That was before the state imposed a stricter length requirement on the Upper Flint River, where a fish now have to be at least 15 inches long before it can land on someone’s plate.

Elsewhere on the Flint, the requirement is 12 inches; at Lake Lanier, the limit is 14 inches. Anglers can take home up to 10 bass a day.

The longer length requirement, along with a general shift toward releasing fish, has likely resulted in a higher number of shoalies being thrown back, Sammons said.

“You definitely have a new wave of folks fishing that river and none of them would think of keeping a shoal bass,” Sammons said. “Some of them feel really guilty if they accidentally kill one. I’m like, ‘It’s OK. The population is going to be fine.’”

A growing population’s thirst and the introduction of invasive species represent more likely threats to the shoalie on the Flint, he said.

Randy Vining, another fishing guide who said he encourages people to release the shoal bass they catch, said he sees an upside to more people venturing out onto the Flint River in pursuit of the shoalie: More people who will become a “protector” of the fish’s home.

“Then when they hear somebody from Atlanta say, ‘We need to dam up the Flint River,’ they’ll say, ‘No way, man. That place is beautiful,’” Vining said, calling Georgia the “last bastion of the shoal bass.”