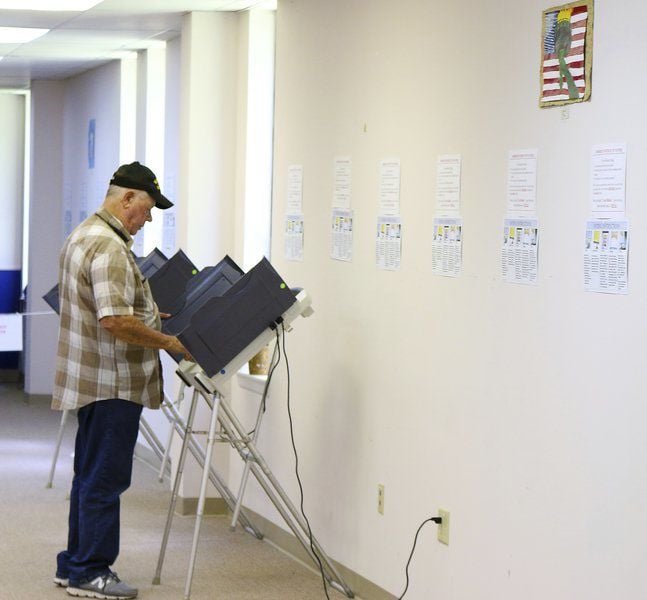 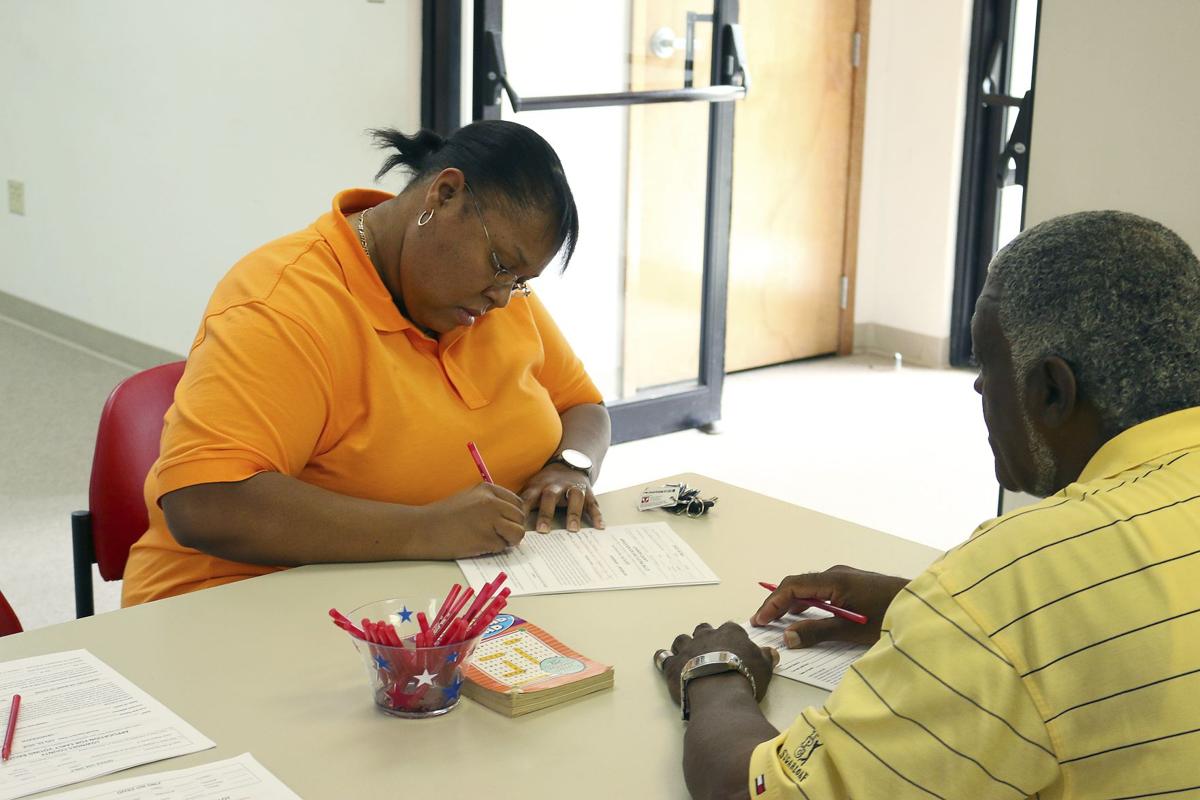 Derrek Vaughn | The Valdosta Daily TimesJernii Gardner fills out a voter card before casting her ballot in Lowndes County during early voting. 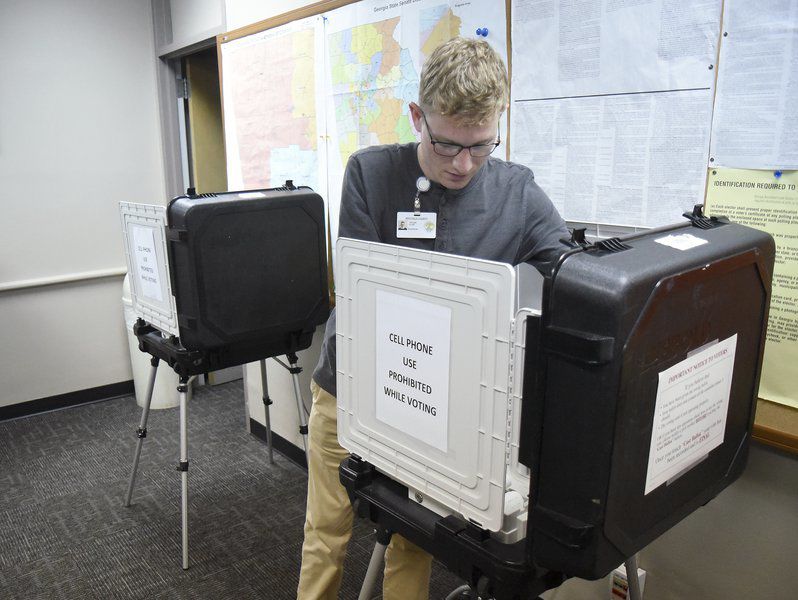 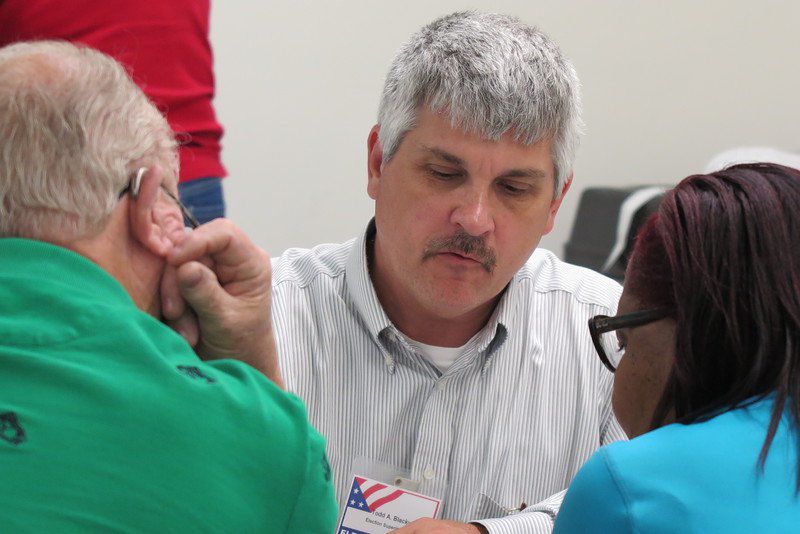 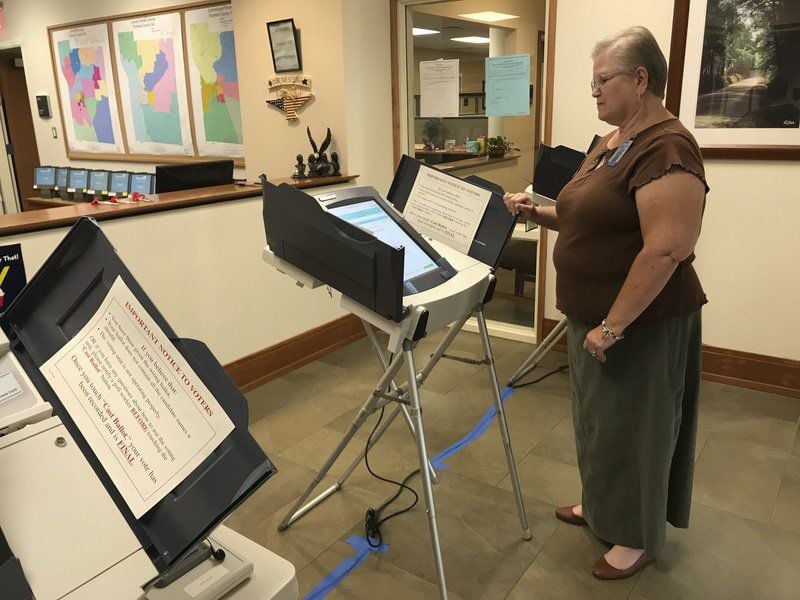 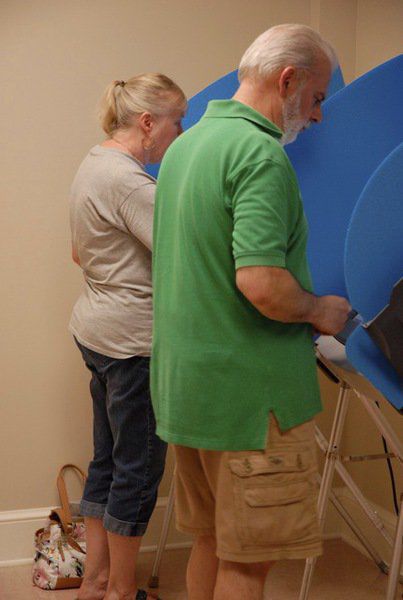 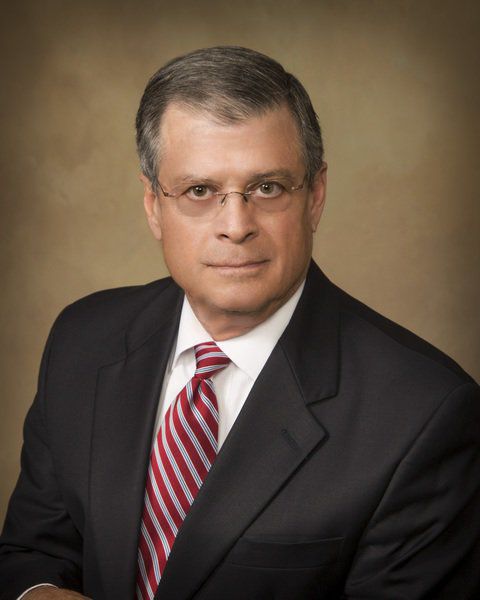 Derrek Vaughn | The Valdosta Daily TimesJernii Gardner fills out a voter card before casting her ballot in Lowndes County during early voting.

VALDOSTA — Vietnam veteran Thomas D. Watson drove a tour bus for years. He was always away from home, on the road somewhere.

Even on Election Day.

His job made it difficult for him to vote on Election Day. So Watson takes advantage of early voting, he said, to make sure his voice is heard.

"I'm going to gripe about things, and if I don't vote then I can't gripe," Watson said. "(Everyone's) vote matters."

For Moultrie resident Joe Amore, there’s a simple reason to vote early: Something could go wrong on Election Day and ruin plans to make it to the polls.

“You never know what comes up on Election Day,” said Amore, a pastor at Love Endures Ministries.

A family emergency or other circumstances could interfere. Amore recommends people vote early or use an absentee ballot without waiting for Election Day.

“We’ve done it in the last couple of presidential elections,” he said. “We try to avoid the long lines. If it’s given to you, take it. I think it’s great.”

Thomas County resident Debra Sauls said she always votes early. She said she finds it more convenient. So convenient that she has never even visited her voting precinct.

"It gives you a longer period of time you can do it," said Sauls, Thomas County deputy probate clerk whose office adjoins the elections office. "Some people cannot get to the polls on voting day. Everybody can't do it that day."

For Helen Crawford, president of the League of Women Voters in the Dalton area, early voting makes voting available to as many voters as possible.

“When the only time you could do it was a single Tuesday, the opportunity was certainly more limited,” Crawford said. "Speaking for myself and not for the league, I feel that a few weeks is adequate.”

She said campaigning generally reaches a peak in the last few weeks before the election, so if someone votes too far out, they may not get all of the information they need.

“I think Georgia's early voting strikes a good balance in terms of the amount of time it provides,” she said.

For Georgia, the three-week voting period was decided by the state, said Deb Cox, Lowndes County supervisor of elections. In the past, shorter and longer early voting periods were tested, but the state decided three weeks is the best number for the majority of counties.

“It’s a little inconvenient for the small ones, and it's not quite enough for the large ones, but for the majority, it’s just about right,” Cox said.

Lowndes County is on the low end of the larger counties, Cox said. So, the three-week time frame usually works well for Lowndes.

For residents, early voting helps decrease the number of errors in the voting process when issues arise.

Cox said those errors can undermine the entire democratic process.

In the SunLight Project coverage area – Valdosta, Moultrie, Thomasville, Dalton, Milledgville and Tifton, Ga., and Live Oak and Mayo, Fla. – early voting plays an important role in every election. Some disagree on whether the role is good, bad or neutral, but overall, voters and officials agree there should be as few roadblocks as possible between people and making their voices heard at the polls.

In Lowndes County, Cox said participation in early voting has been trending upward through the years.

"I know that since my appointment," said Frank Scoggins, Thomas County elections supervisor, "there have been significant increases, and in some cases, 50 percent of the total votes were cast during early voting."

In Lafayette County, Fla., early voting has definitely been utilized by voters.

“Early voting is on the increase,” said Travis Hart, supervisor of elections for Lafayette County. “It has been increasing over the years.”

During the past four elections, the early voting numbers have doubled from 500 early voting ballots cast in the 2014 primary election to 1,174 in the 2016 general election.

“The voters can work around their schedule to vote,” Hart said.

Leila Dollison, election supervisor for the Tift County Board of Elections and Registrations, pulled early voting records from 2014 through the recent primary election this past May. She said she realized it is difficult to compare elections because the number of people who vote varies widely depending on what is on the ballot.

She said 2016 was a big election with big numbers.

Dollison said she remembers people really wanting to vote in the 2016 presidential election.

Dollison compared it to the 2017 city and county election, which had a special purpose local option sales tax on the ballot.

Early voting has played a major part in some of the most recent election cycles in Baldwin County.

In the May 22 statewide primary, 1,506 of the county’s 5,026 registered voters cast ballots early, either by mail or in person, a rate of roughly 28 percent.

In a March referendum on a new T-SPLOST tax, a little less than 50 percent of total voters voted early, while the November 2016 election saw early voters rise to 54 percent. That same year, the state race primaries had a similar number of early voters to its May 2018 counterpart at 36 percent.

Early voting may make it more convenient for people, but Todd Blackwell, probate judge and elections superintendent of Baldwin County, said he hasn’t seen it make a difference in the number of total voter turnout.

He said all early voting does is give people an additional 21 days to vote if they choose, but it doesn’t necessarily make people more inclined to vote.

“Percentage-wise,” Blackwell said, “the number of voters stays the same, it’s just that early voting makes it more convenient for the voter.”

The Cost of Convenience

With only about half of the active voting population participating in early voting, and that half representing an often small percentage of the total number of registered voters, some congressmen and statewide representatives argue it costs too much.

“There’s a balance,” Cox said. “It’s not just the money going out the door with no return. You’re dropping money on Election Day and increasing it a little bit on this side.”

She said the 2016 November election cost an extra $4,618.25, which includes adding temporary staff to help with the increase traffic of voters. For smaller elections such as runoffs, Cox said it doesn't typically have any additional costs since the elections office always has three people.

"This is an estimate because some days had less workers, and some days during the last week may have had more workers to assist at the counter, with phones, balancing everything from the day before," Cox said.

State Rep. Jason Shaw said as a representative of a region comprised of small and large counties, he sees both sides of the argument and thinks there needs to be a balance between the citizen's right to vote and the financial burden put on small governments.

Shaw said Lanier County has been forced to close almost all of its precincts because of the rising costs. For Shaw, who is from Lanier, the closings have affected him personally.

"I lived out in the Mud Creek section, and for years, we were able to vote on Election Day at the Mud Creek Volunteer Fire Department, which is way out in the north end of the county," he said. "It was a tradition to go vote at that rural area. Now, it's closed. Others have closed, and there were hard feelings 'cause a lot of folks had been voting there for years."

The county had to close the Mud Creek precinct for financial reasons. Shaw said early voting wasn't the sole reason, but the additional costs of keeping three people at a precinct for three weeks played a significant role.

On one side, it's great that people have the convenience to vote whenever they want, she said.

But from a budget standpoint, she said it can be difficult to man the precinct for 21 days when barely anyone takes advantage of it, especially during elections with little interest.

"We don't want to disenfranchise voters," Griffin said, "but we would prefer for (early voting) to be two weeks."

As an example of the cost, she said the May 22 general primary early voting and preparations cost the county $4,372. Larger counties are better equipped to pay, she said, but considering the number of elections in a given year, the costs can be daunting to a county the size of Lanier.

Dollison said the cost of early voting is rolled into the overall cost of running each election in Tift County and averages about $10,000.

Glenda Williams, Suwannee County supervisor of elections, said a total of $5,200 was spent during the 2016 general election, while Colquitt County Voter Registrar Paula McCullough said the main cost for them is the two full-time poll workers, which costs the county about $2,160.

A county employee from the Colquitt County Magistrate Court rounds out the skeleton team used for a runoff election though not many people show up.

Even with the extra cost to taxpayers, McCullough said early voting is popular.

“We have lots of voters come in and say they would rather do the early voting,” she said.

And, in Whitfield County, the cost of early voting doesn't cost taxpayers much since it takes place in the elections office in the courthouse.

"We are here anyway, so it doesn't really cost anything except when we have to come in on a Saturday," said Mary Hammontree, Whitfield County registrar. "Then I have to pay the people who come in overtime.”

Hammontree estimates the cost of holding Saturday voting, when it is required, is about $700, and she said that is the only additional cost of early voting.

Rep. Shaw said early voting began about 30 years ago as a way to make it easier on election officials who were overwhelmed by crowds on Election Day. It started with a week and slowly grew and grew until it was 45 days.

Forty-five days was deemed too extreme, so it was changed to the current three weeks. He said he sees no reason why the state can't take another look at early voting.

"Eventually, I think we should look at these smaller jurisdictions and see how many people have voted and see what it costs per vote and compare that cost to a larger county," Shaw said. "It would be like night and day."

If a larger county paid the same amount per vote as the smaller counties, taxpayers in larger counties would go ballistic over the costs, he said.

"There has to be some kind of balance," Shaw said, "between making sure there is plenty of time to vote and, at the same time, making sure we're not creating an undue financial burden for the taxpayers. I think it can be done."