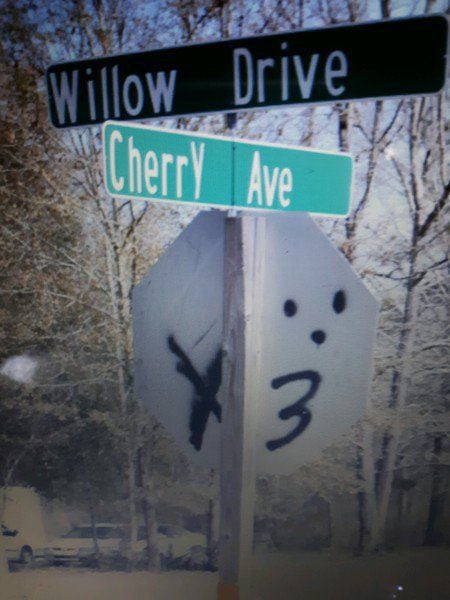 Photo courtesy Moultrie Police DepartmentPolice investigators photographed this graffiti on the back of a stop sign in a residential neighborhood in rural Colquitt County and identified it as belonging to a Hispanic gang. The area is known by the nickname 'Little Mexico' because so many Hispanic farm workers live there. 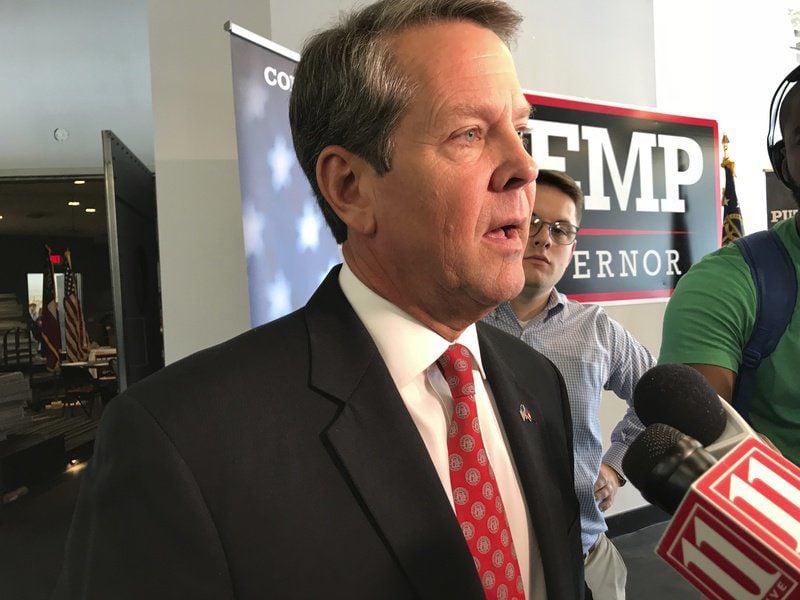 Jill Nolin | The Valdosta Daily TimesThen-candidate Brian Kemp, who is now Georgia’s governor, talks to reporters about his proposed gang initiatives in September 2018. 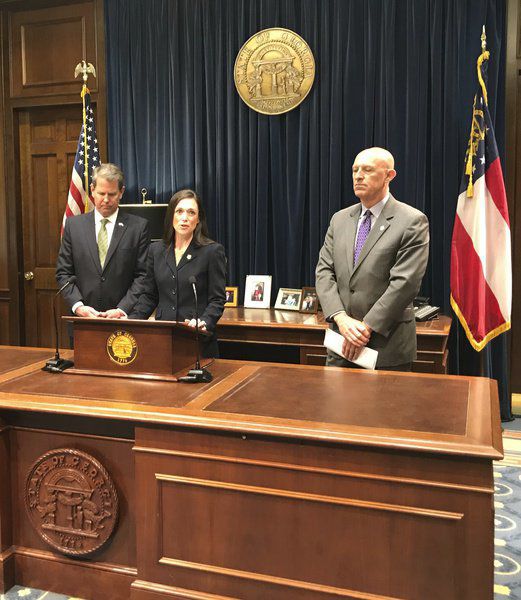 Jill Nolin | The Valdosta Daily TimesJaret Usher talks to reporters this month after being named the director of a new Georgia Bureau of Investigation anti-gang task force, which is the state agency’s first anti-gang initiative. Usher, who is a former Cobb County prosecutor, will lead a team of two agents. Pictured with her is Gov. Brian Kemp and GBI Director Vic Reynolds.

Photo courtesy Moultrie Police DepartmentPolice investigators photographed this graffiti on the back of a stop sign in a residential neighborhood in rural Colquitt County and identified it as belonging to a Hispanic gang. The area is known by the nickname 'Little Mexico' because so many Hispanic farm workers live there.

Jill Nolin | The Valdosta Daily TimesThen-candidate Brian Kemp, who is now Georgia’s governor, talks to reporters about his proposed gang initiatives in September 2018.

Jill Nolin | The Valdosta Daily TimesJaret Usher talks to reporters this month after being named the director of a new Georgia Bureau of Investigation anti-gang task force, which is the state agency’s first anti-gang initiative. Usher, who is a former Cobb County prosecutor, will lead a team of two agents. Pictured with her is Gov. Brian Kemp and GBI Director Vic Reynolds.

ATLANTA – Adel is an agricultural community parked along Interstate 75 that regularly churns out a bounty of vegetables and other crops.

But on a recent Sunday morning, the small town that would rather be known for its daylilies became the setting for the type of violence Gov. Brian Kemp has highlighted as a statewide crisis.

About 300 people – some as young as 12 years old – were gathered at a venue for a post-prom party when about 100 shots were fired, killing an 18-year-old who had just finished his National Guard training and injuring at least two others.

Investigators have said the shooting appears to be gang related.

Known gang members were there, although investigators have not at this point connected the motive to gang activity, said Mark Pro, special agent in charge with the Georgia Bureau of Investigation. No one has been arrested as of late last week.

“I think we’re going to end up seeing that it’s been a blessing and a curse,” said Chase Daughtrey, who is the Cook County probate judge.

“A curse because so many people were hurt and how tragic it was for those young people there who witnessed it,” he said. “The blessing’s going to be that I think it’s been a wake-up call to the community to say, ‘You know, we really have a big problem here that needs to be dealt with before it boils over.’”

Law enforcement and others say the problem is certainly not unique to Cook County.

“Gang activity is located throughout the whole state of Georgia,” Pro said. “It’s not just in larger cities. It’s everywhere.”

That includes towns smaller than even Adel, which was home to about 5,000 people as of the last count in 2010.

Data on gangs is difficult to come by, and the Federal Bureau of Investigation has not done an official count since 2011.

The Georgia Gang Investigators Association tried to fill the void by polling local law enforcement early last year. The group tallied more than 71,000 gang members and associates in Georgia, which is a figure that includes prison inmates.

“All you have to do is pick up your local paper, turn on the television or talk to your law enforcement in your local community,” Kemp said at a recent press conference. “It is a serious issue in our state – one that we cannot afford to ignore if we hope to be the best state in the nation to live, work, start a business and raise family.”

The survey identified nearly 1,600 active groups in Georgia, with local law enforcement reporting the presence of gang members in all but two counties in Georgia and in all but four school systems.

The association referred a request for local details to the original source. When contacted, some local law-enforcement agencies said they did not recall participating in the survey. The Lowndes County Sheriff’s Office and Thomasville Police Department provided their responses.

In Lowndes County, the sheriff’s office reported at least 300 active gang members and associates claiming affiliation to everything from Crips to Ghost Face Gangsters and Aryan Brotherhood, the latter being white supremacist prison gangs.

Lowndes County Sheriff Ashley Paulk attributed roughly two-thirds of all local crime to gangs. Auto thefts and break-ins appear to be the most common gang-related offenses, but he said a recent murder was also gang related.

“They make a lot of trouble,” Paulk said.

Paulk said his agency has recently started setting up roadblocks multiple times a week, with the initial one reaping a half dozen stolen firearms. He also convened a meeting with black pastors, counselors and others to enlist more people in the community to help tackle the issue. He said he wants to raise awareness about the issue.

In Thomasville, the police department tallied as many as 200 gang members and associates operating in 18 gangs, although Detective Adam Lawson said the actual number of local gangs could be closer to 30.

Lawson said the gangs in Thomasville tend to be mostly drawn to burglaries, car break-ins and other thefts, but their activities do at times turn violent.

Lawson said he once charged a 12-year-old member of the Rollin’ 60 Crips with robbery, which he said highlights the need to start focusing on children before they even leave elementary school.

“It’s absolutely heart breaking,” he said. “You’re talking about a 12-year-old boy who, in every sense of the word, is just as dangerous as some 30-year-old convicted felon.”

Locals have a tendency to dismiss the gang members in Thomasville as “wannabes,” he said. But here’s his counterpoint: If they are behaving as a “real gang” would, then aren’t they a real gang?

“I think it’s just a way to distance small-town Thomasville from the problem,” Lawson said. “But they also don’t realize that that’s the very reason why gangs are coming into your rural areas – because of the lack of law-enforcement resources, the lack of education and the ease of access to a recruiting pool.”

Still, Lawson was not sounding any alarm bells.

“It’s definitely not a level where there needs to be a public alarm raised, where everyone needs to be looking over their shoulder wherever they go,” Lawson said. “But it’s just something you keep in the back of your mind the same you do that people break into houses so I need to lock my doors.”

Kemp, a first-term Republican governor, made a proposed crackdown on gangs and drug cartels a central part of his campaign, pledging to form a task force and fund a street gang database.

The database is still in the works, but Kemp announced earlier this month that he is moving forward with a task force under the Georgia Bureau of Investigation, making it the agency’s first anti-gang initiative. Lawmakers budgeted $500,000 for the effort this year.

“There’s a lot of law enforcement and prosecutors all across this state who are working hard on this issue every day,” Kemp said. “But they need some help. They need more resources. They need a state focused on this at times, and we’re going to provide that and send that message to these folks that they’d be better off doing this activity in another state besides Georgia.”

Usher said gang activity in Georgia had reached a “crisis” level and that it was time to respond in an unprecedented way.

GBI Director Vic Reynolds said a lot of local law-enforcement agencies have a tendency to “step over” gang cases in pursuit of more serious charges, such as armed robbery or homicide.

A conviction from Georgia’s gang law, which was beefed up nearly a decade ago in the midst of what was then considered a crisis, can add five to 20 years to a person’s prison sentence.

“This governor has made it very clear that he wants them pursued,” Reynolds said. “We’ll be pursuing them wherever we can find them in the future.”

But that tough-on-crime approach has also prompted some concern.

“With more people under correctional control than any other state, the answer to street gangs in Georgia cannot and should not be to further criminalize the communities impacted most by creating databases, increasing prosecutions and lengthening prison sentences,” Marissa Dodson, the public policy director for the Atlanta-based Southern Center for Human Rights, said in a statement.

Georgia had the highest rate of “correctional control,” according to a 2018 study from the Prison Policy Initiative, which also looked at people who were on probation and parole. The state topped the list because of a high probation rate.

“Instead, Georgia should focus on the societal barriers causing young Georgians to believe that being in a street gang is the only viable option and must invest the resources necessary to allow communities impacted by these issues to thrive,” Dodson said.

Rep. Dexter Sharper, a Democrat from Valdosta, said he hopes the renewed focus on gang violence is accompanied with an emphasis on prevention and early intervention. He called the $8.4 million in new state funding for mental health counselors in Georgia’s high schools a good start.

“We need to get them before they want to be a part of a gang,” he said.

When that is not possible, Peter Skandalakis said he believes the enhanced focus on gangs could at least cause young recruits to rethink their decision, possibly through a probated sentence.

Skandalakis is the head of the Prosecuting Attorneys’ Council of Georgia, which has been training local investigators and prosecutors on how to go the extra step in proving a crime was gang-related.

But Skandalakis noted a clear difference between violent gang members and those he referred to as lower-level “tagalongs.”

“When you talk about gang activity, you’re really talking about violent offenders committing violent crimes that impact the public safety of all of us. And those are the ones that prosecutors want to focus on,” he said.

“Criminal justice reform is for those individuals that we can save, but we have some violent criminals that we need to separate from society for a time being and maybe – maybe – turn them around as well,” he said.