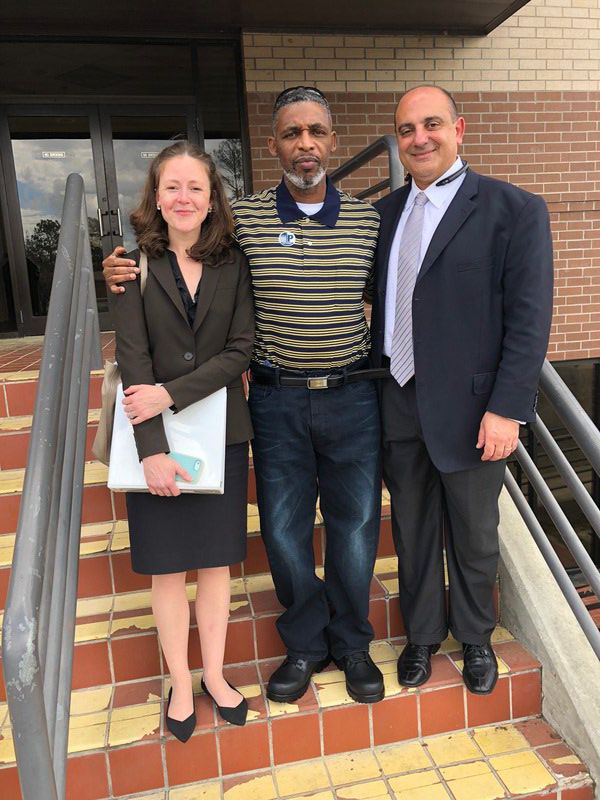 Submitted PhotoSarah Geraghty of the Southern Center for Human Rights and Valdosta attorney Sam Dennis worked to free Donald Phillips, center, from life without parole for a 1990s drug conviction. Wednesday, Feb. 21, Phillips was freed after 24 years in prison. 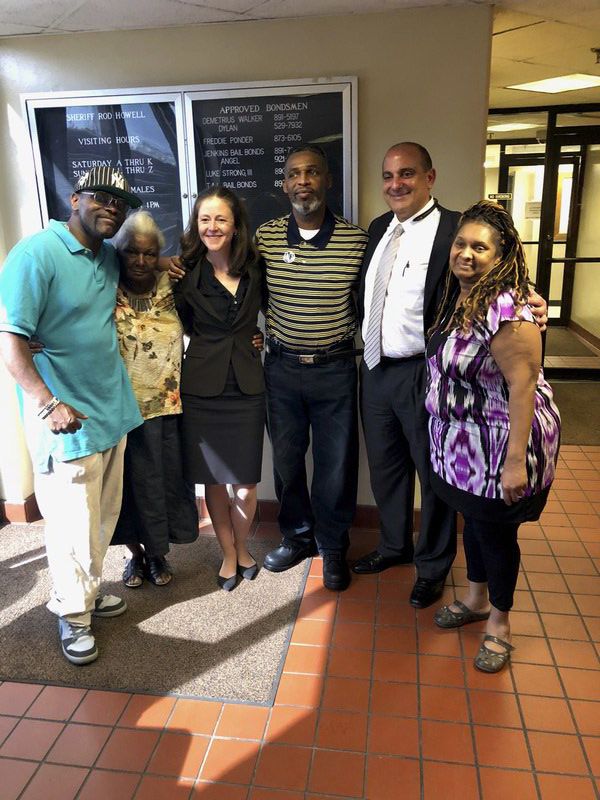 Submitted PhotoSarah Geraghty of the Southern Center for Human Rights and Valdosta attorney Sam Dennis worked to free Donald Phillips, center, from life without parole for a 1990s drug conviction. Wednesday, Feb. 21, Phillips was freed after 24 years in prison.

VALDOSTA – Nora Henry said she prayed every day of the past 24 years for the release of her son, Donald Phillips, from prison.

"I prayed and prayed for him to get out," she said Thursday, Feb. 22. "I had faith I would see him again. Free. They didn't want to loose him but they had to loose him."

Wednesday, Feb. 21, Donald Phillips, 53, was set free, released after 24 years in Georgia prisons, incarcerated since his arrest at the age of 28 and conviction at 29.

Less than 24 hours after his release from a Colquitt County Jail, Phillips was seated with his mother, younger brother Elijah Singletary and older sister Lorna Griffin, paralegal Tara Smith and attorney Sam Dennis in the Valdosta lawyer's office.

Dennis worked with Sarah Geraghty of the Southern Center for Human Rights to free Phillips from prison. Phillips was serving life without parole as part of the three-strikes laws and mandatory-minimum sentencing practices of the 1990s.

"Mandatory-minimum sentences are very dehumanizing," Dennis said. "They damage our community and damage the families of men who are less than perfect."

Phillips of Colquitt County was incarcerated as part of the three-strike laws.

He was first convicted in 1983 for robbery, according to court records.

He was imprisoned a second time for trafficking cocaine and misdemeanor obstruction.

Then, he was arrested in the 1990s possessing 4.2 grams of cocaine.

May 11, 1994, Phillips was convicted of possession of cocaine with intent to distribute.

Phillips received a life sentence in Colquitt County Superior Court but the state prosecution failed to seek the statute that would have denied him parole; however, the state parole board repeatedly denied Phillips parole, stating the trial court's sentence held the intention of denying him parole, Dennis said.

Even when Colquitt County Superior Court amended the sentence in 2011, the board still denied Phillips parole.

"Absent relief, Phillips would have remained in prison for the rest of his life," according to papers provided by Dennis.

"He (was) the only person from Colquitt County or the Southern Judicial Circuit serving life without parole for a nonviolent offense, while people convicted of murder in this circuit are serving parole-eligible sentences."

"Mandatory minimum sentences have done nothing good and have done everything bad," Dennis said. "These statutes were passed with good intentions but without good research or good knowledge."

Phillips case came to the attention of the Southern Center for Human Rights a few years ago. Dennis has been involved with the Phillips case for several months.

The Valdosta attorney has worked with the Southern Center for Human Rights for the past few years. In 2016, Dennis participated in the release of Aron Tuff, also of Colquitt County, who spent more than 22 years in prison for a conviction for possession of a crack pipe containing 0.03 grams of cocaine residue.

Tuff remains free and is employed. Wednesday, Tuff joined Dennis and others in the Colquitt County courtroom in support of Phillips' release. Phillips and Tuff knew each other in Colquitt County; they briefly served time in the same prison, Phillips said.

"No one's saying Donald Phillips should not have served time for what he did," Dennis said, "we're just saying he served 23 1/2 years more time than he should have."

At 3:30 p.m. Wednesday, Feb. 21, Phillips walked out of the Colquitt County Jail, where he was held for the hearing, a free man.

His first meal outside of prison – a sausage and tuna fish salad, which he made, which he could eat when he wanted without a prison-enforced dinner schedule.

He's staying with his mother in Colquitt County. He plans to visit brother Elijah Singletary's church in Atlanta this weekend. He will eventually live with sister Lorna Griffin in Atlanta.

Speaking at 11 a.m. Thursday, less than 24 hours after his release, seated in the freedom of Sam Dennis' Valdosta law office, Phillips was still adjusting to freedom. His mother was still praying.

"What will he do now," Nora Henry asked. "Where will he work? Will anyone hire him after him being in prison so long?"

But Donald Phillips has plans.

He wants to get a job to earn his way. He wants to attend vocational school. He said he wants to become a barber, work with relatives who are barbers. Eventually, he wants to get his commercial driver's license and drive long-haul trucks.

"When I was in prison," he said, "I thought of driving trucks, being on the road. Be away from everything. Be by myself. And I'll see America. See the country."