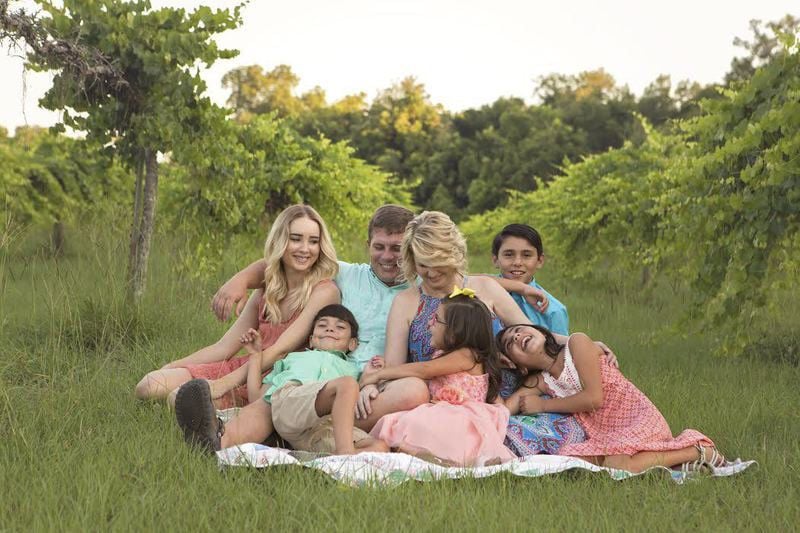 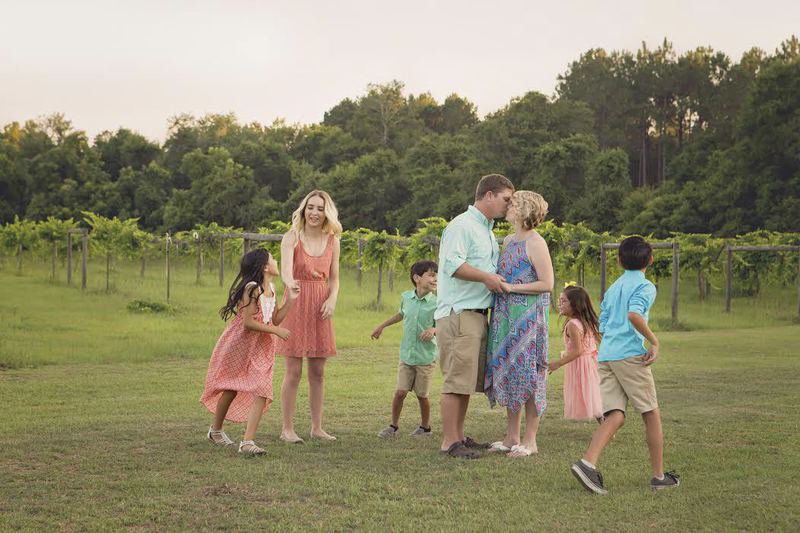 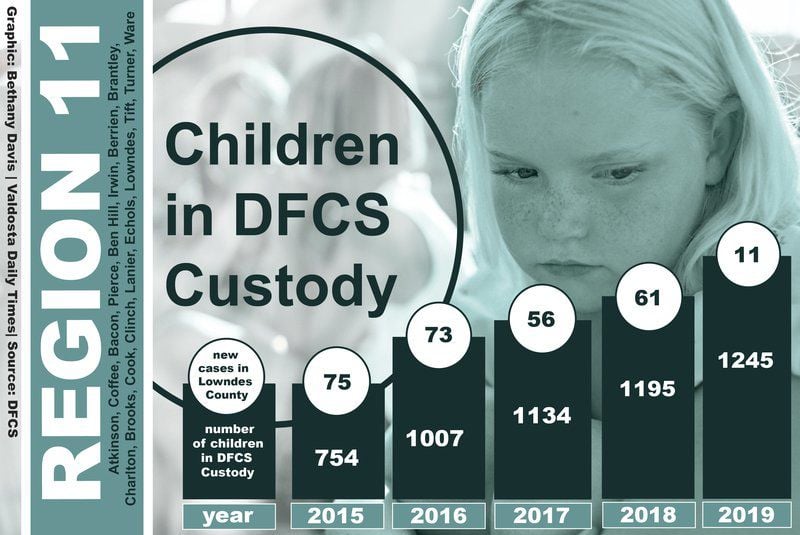 VALDOSTA — Ten years ago, Lisa Fender did not plan on becoming a mother of five.

A second marriage brought husband Michael Fender into her life more than a decade ago. Once married, they were ready to have kids, but a hysterectomy kept her from having her own children.

“I have a cousin that works in DFCS, and she told me they didn’t have enough foster homes,” Fender said, referring to the state Division of Family and Children Services. “From there on, we started looking into it and took the classes and decided that is what we were going to do. Our intention was to get one, but God had other plans.”

The Fender home became an approved foster-to-adopt family, and shortly after, Taylor came into their life.

They fell in love with the 1-year-old quickly but they found out she had family in the system. A brother and sister were in a separate home together, and another brother was in a different home.

Even though four kids was never the plan, Fender said, neither was separating Taylor from her three siblings Justin, Gloria and Cash.

“That breaks my heart that any siblings get taken from their homes, and then they’re in different homes,” Fender said. “All they have is each other. I immediately fell in love. They're great kids.”

She adopted them five years later — she would have done it sooner, but the process is slow — and they are just as much part of the Fender household as her, Michael and her daughter from a previous marriage, Bree Trowell.

It wasn’t an easy path, Fender said, and it still isn’t.

Her four adopted children were ages 1-6 when they came into her life, and with that came four different personalities and levels of baggage.

“When they came in, the little things they said and did made me realize what they'd been through,” Fender said. “I grew up thinking everyone had a loving mother and father, but that’s not the case. I can remember the first time we had supper, they asked if they could sit at the table with us.”

Their story is typical of many foster children cases: they grew up in a home with domestic violence issues and neglect.

For them to get a foster home together and then later be adopted, the Fender siblings are part of a group that is fortunate but very few.

There are 47 children in the DFCS system in Berrien County but only four homes to place them, according to Bridge 11 March 2019 data.

It’s a problem felt across the region, state and nation — a gap that exists between the number of children waiting and the small amount of homes willing to open their doors for a temporary or permanent living situation.

Berrien is part of Region 11, which mostly consists of South Georgia counties.

Each county is no exception to the foster children to home gap.

In Echols County, the gap isn’t too big with five children in need and two homes available.

Then there are huge gaps such as Coffee County with 204 children in need but only 19 foster homes open.

Lowndes County is another place with a large amount of cases — 155 in the month of March — but only 36 homes available for these children.

“We have 1,200 foster kids and 192 foster families in Region 11,” said Gail Finley, DFCS director for Lowndes and Brooks counties. “That is covering 18 counties. We have a problem number wise.”

Seeing new caseloads drop from 75 in 2015 to 61 in 2018 has been a good sign, Finley said. The drop comes from child-placement agencies advocating kids live with other family members or family friends first.

The number of foster homes, however, hasn’t changed in the last five years.

It has remained a constant 23-28 approved by DFCS and about 10 from private agencies such as Choices for Life and NECCA.

Despite new cases being low, the numbers rose significantly from 754 children in January 2015 to 1,245 in January 2019, said Esther Duvall, DFCS field program specialist.

Finley said it should be noted foster care is an absolute last resort taken after a long investigation and efforts to help the biological parents first before having to take drastic measures of separating a child from the family unit.

“Anything we can do that would be less traumatizing to the kids, we’re going to do that,” Finley said. “When you have stronger families, you have a stronger Georgia. We want to keep them at home without compromising safety.”

Some families cannot be helped, and the numbers show it’s a community problem.

Fixing the large caseload isn't easy, but the large gap has become an issue, especially when it comes to keeping these children in the region where they grew up.

“When kids come into care, they are traumatized — we know that,” said Sharon Boykin, DFCS supervisor of the caregiver unit. “If we can’t find them a local foster home, we have to reach out to the next county. A lot of kids end up in Atlanta.”

This isn’t just a DFCS problem. Community-placement agencies, such as Choices for Life, are struggling with the same challenges but with less funding.

Adrian Rivers of Choices had an idea, and it would involve multiple private and public agencies across the entire South Georgia region.

“We went to a conference in Savannah in October,” Rivers said. “They were talking about a lot of the work they were able to do in increasing foster homes through raising awareness in the community. I immediately told Sara Riley, our executive director, about it and the idea of us collaborating with others.”

Bridge 11 was soon born; Choices leads the effort with help from other community-placement agencies such as Elks Aidmore, NECCO, Camp Rock, MAAC and DFCS.

They didn’t stop there when reaching out for help, Riley said. The gap is a community issue, so they needed community involvement.

“Everyone has a part that they can play,” Riley said. “We really want the community to become involved with what happens to these children. We’re definitely more powerful together than separate.”

Programming is only a few months old but Riley said they are already feeling the positive effects of coming together.

“We share trainings, information, advertising costs and other resources,” Riley said. “That way, one agency isn’t tasked with all that is involved in being in foster care.”

The program kicks off this month, which is National Foster Care Month, with an appreciation night at Big Nick’s for Region 11’s foster parents.

The event will have food, drinks and even karaoke, which Rivers said is a small price to pay for what they do for this community’s children.

Foster parents come in all different shapes and sizes and walks of life.

But community-placement agencies agree that foster parents all have one thing in common.

It takes a special person to do this work.

For Valdosta resident Felecia Denson, it isn’t special because it’s what she has always done.

“I’ve always taken in kids, whether it was my god kids or a friend that needed help,” Denson said. “I had a discussion with my husband, and we decided to become foster parents. We’ve been doing it since May 2014.”

In many ways, her story is similar to Fender’s story. She and her husband, Lester, didn’t have kids of their own, but they had hearts big enough to let them in.

Foster care data scared them, too, but they knew that’s the direction they wanted to take while also helping children in need.

Since 2014, they have had a total of 19 foster kids in and out of their home. The Denson home currently consists of five adopted kids and two foster children.

It comes with its challenges, though.

For Denson, she does research beforehand because every child she comes across is different from the last.

“We have some come in for neglect, drugs or child abuse — it ranges,” Denson said. “You have to do your research beforehand. If you don’t, you’re lost. It’s always a learning experience.”

Fender had to get used to utilizing counseling services for her four kids.

“It was an adjustment because my mentality was if we just loved them, everything would be OK,” Fender said. “I was in for a rude awakening.”

In both cases, they made it work, fell in love with their kids and ended up giving them forever homes.

Foster children's lives may never be normal, but they are closer to normal because of families such as the Fenders and Densons, Finley said.

Finley said the main factor that will help overwhelming caseloads is more families willing to do the same.

“We cannot do our jobs effectively without our foster parents,” Finley said. “Many times, we are calling on them at 2 a.m. saying we have someone, and they say bring those babies to us. They know their reason and their purpose, and it’s exceptional.”

Foster Care Gap: The Story Behind the Story with Katelyn Umholtz