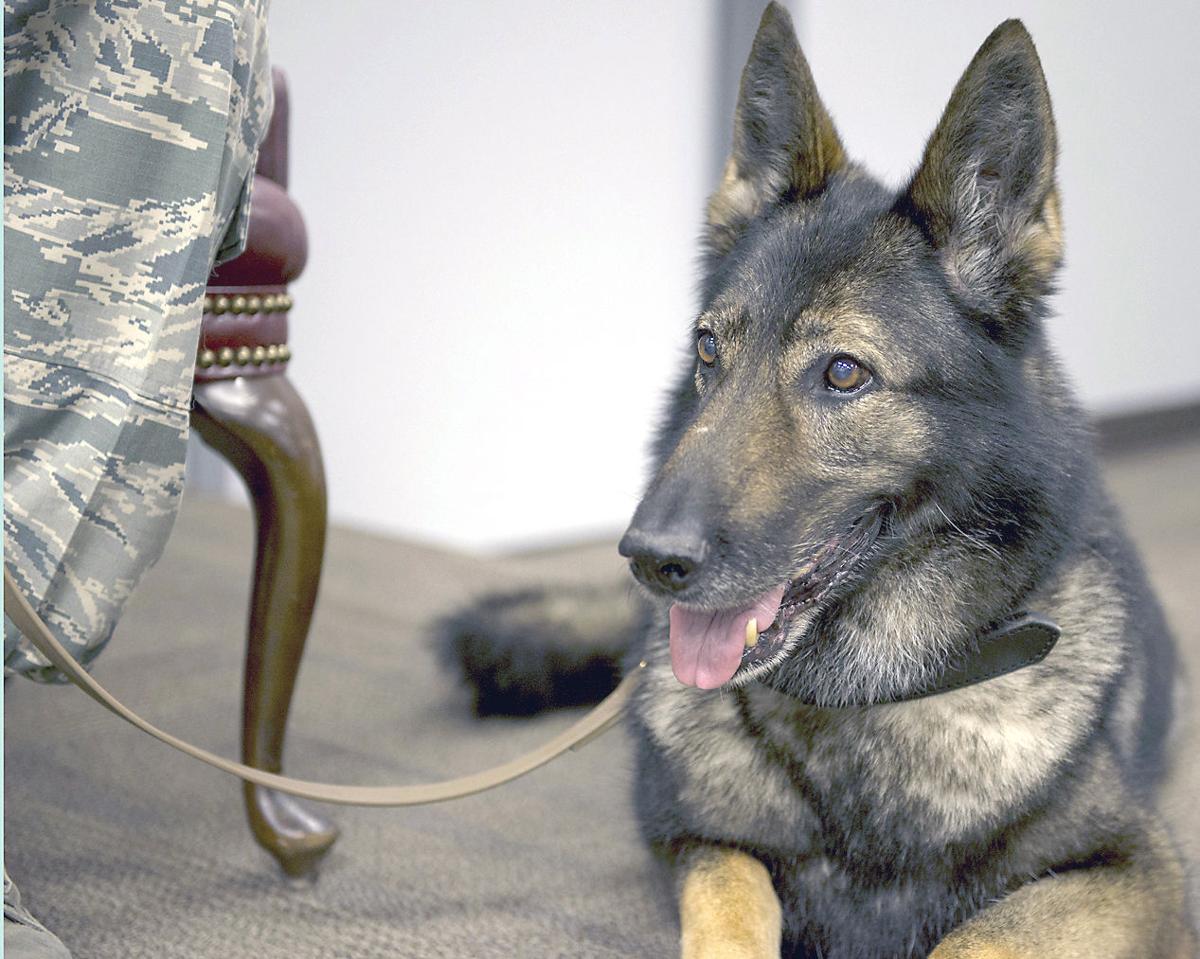 Retired Military Working Dog Liza, 23d Security Forces Squadron, lies down during her MWD retirement ceremony April 2 at Moody Air Force Base. Liza arrived at Moody in August 2006 and was certified as a patrol and explosive dog. 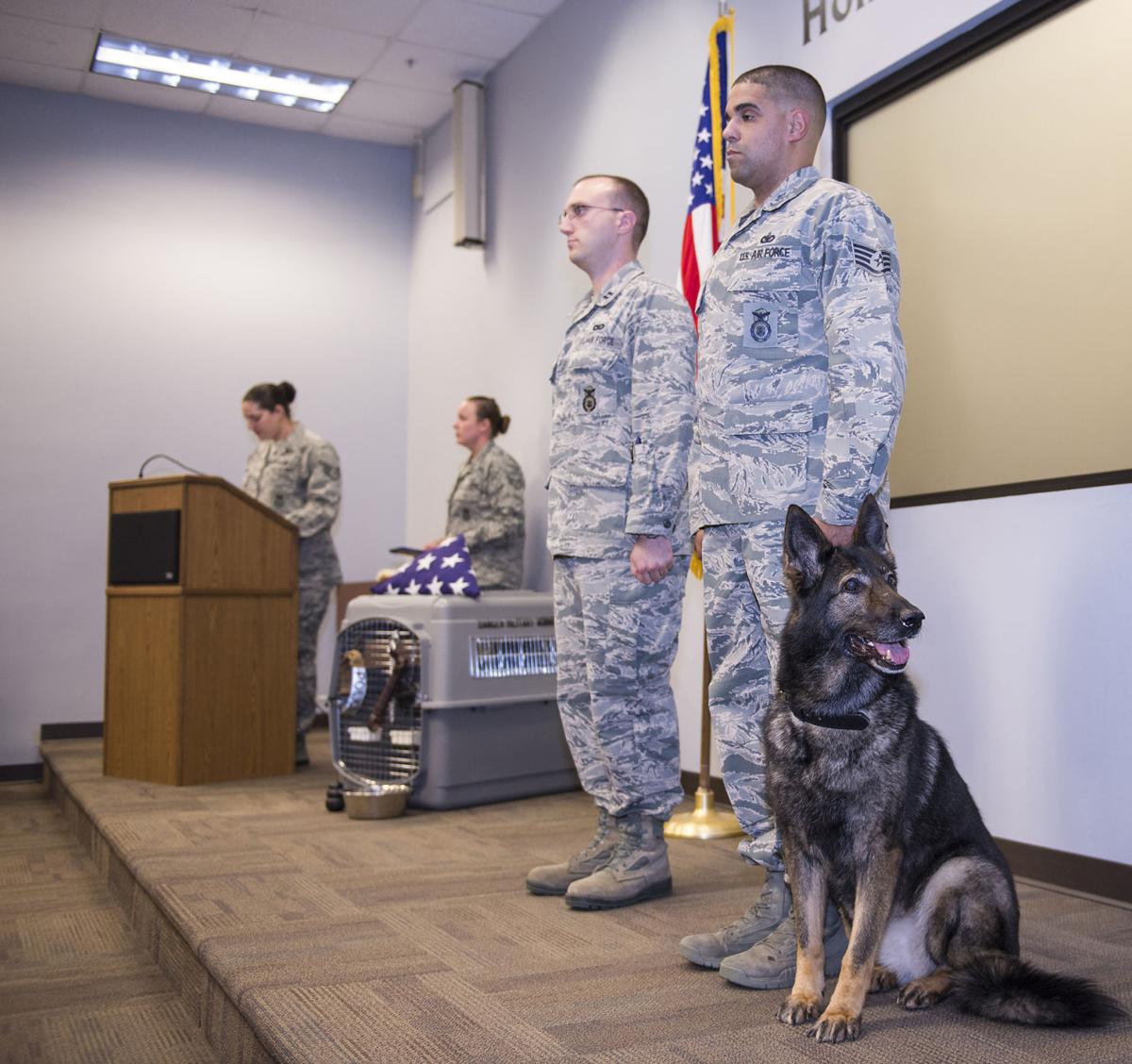 Retired Military Working Dog Liza, 23d Security Forces Squadron, lies down during her MWD retirement ceremony April 2 at Moody Air Force Base. Liza arrived at Moody in August 2006 and was certified as a patrol and explosive dog.

MOODY AIR FORCE BASE — Despite being good at her job, no one can be in the military forever and after “70 dog years” of active-duty service one 11-year-old German shepherd is now retired.

Military Working Dog Liza joined the Air Force at 9 months old and her extensive resume speaks for itself: 10 years of patrol and explosive detection, four deployments and seven handlers.

It’s safe to say Liza earned her spot on the couch when severe arthritis began to plague her legs and hips. She said goodbye to Moody’s kennel, the only home she’s ever known April 2.

“She’s already home with me ... and retirement (life) is probably the happiest I’ve ever seen her,” said Cruz who was Liza’s handler for two years. “Right now she’s kind of learning the ropes and she’s feeling it out. She’s never lived outside of her kennel other than TDYs (and deployments), and she’s never been around other dogs personally so it’s an adjustment for her, but she’s doing quite well.”

Cruz isn’t the only one who knows firsthand what it’s like to transition a dog from being your partner to a part of the family.

“It’s really eye opening seeing the transition from a working dog to a home dog,” said Staff Sgt. Nicholas Bonello, who recently adopted Norman, one of his former MWDs. “It’s almost like it happened seamlessly. He knew when we left the kennels and got into my car and I drove him home. I opened the door it’s almost like (he said), ‘I’m here, I finally made it to the end and now I get to enjoy retirement.’”

Utterly different from the kennel, Liza’s first night in her new home was spent cuddled up next to Cruz’s kids in their beds.

“The family loves her; we’ve always loved her,” said Cruz, who described Liza as being another kid in the house. “We’re still in shock (she’s ours) but (she’s living) the good life, playing whenever she wants to play and (enjoying) not being in a kennel.”

Before Liza became a member of the family, Cruz shared a bond with her and respected her abilities.

“I knew she was awesome at what she did, she was a good worker and she was a loving dog,” said Cruz. “But now it’s like (I’m) watching her just be a dog. She still waits for me every day by the door when I go to work.”

The connection they shared was noticed by all who came in contact with them and as luck would have it, Cruz and Liza were paired together after Cruz finished the MWD handler’s course in 2013.

Liza’s capabilities and “prima donna” personality were noticed and respected by anyone who came in contact with her.

“She has certainly been the show dog for our demonstrations,” said Capt. Tyler Hiatt, 23d SFS operations officer. “Of course she enjoys showing off. In the kennel she would sleep on her back with all four legs propped up in the air. She is the diva of the kennels and all the other dogs know it because she is the ‘mama dog.’”

Liza’s ability to go from play time to work mode in an instant contributed to her being the go-to dog for almost any situation.

“Liza is a very sweet dog, very loving, but when she turns on that switch to work, she’s probably one of our best dogs in our kennel,” said Cruz. “She moves very methodically, so she’s kind of slow but she’s very to the T on what she finds.”

Liza’s days of being a dual-certified patrol and explosive detector dog are over and she will now spend her days lounging around the house, eating bones and having what her new family describes as “the good life.”