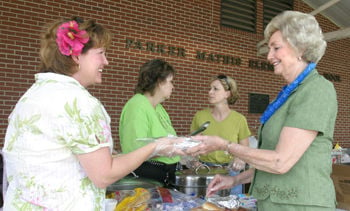 Parker Mathis Elementary School PTO member Shannon Cook hands a hot dog to Beulah Hennly, a retired school teacher, Saturday during the reunion and ceremony commemorating the closing of Parker Mathis at the end of this school year. 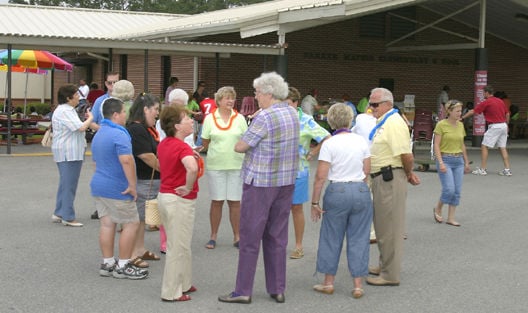 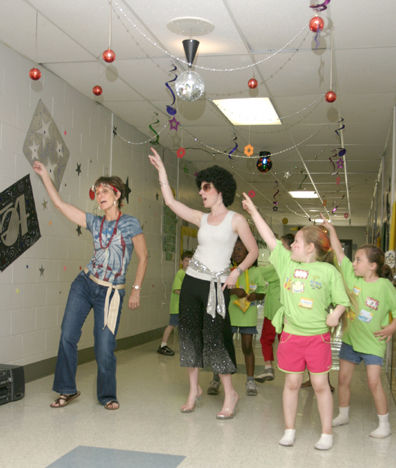 Parker Mathis Elementary School PTO member Shannon Cook hands a hot dog to Beulah Hennly, a retired school teacher, Saturday during the reunion and ceremony commemorating the closing of Parker Mathis at the end of this school year.

VALDOSTA — Former and present teachers, students, principals, faculty, staff and the community bid aloha Saturday to Parker Mathis Elementary School. The life of the school dates from 1955 until 2008 at 1500 Lankford Drive, and its new life will begin in Fall 2008 as Westwide Elementary School on James Road. Hosted by Parker Mathis Elementary School Principal Creacy Sermons, the celebration featured performances by Parker Mathis students, including second grader Gabrielle Gardener, who sang the National Anthem, and a tour of and picnic at the Parker Mathis school facility. Parker Mathis former faculty, staff, and all retirees were asked to stand to be recognized for their educational contributions to making Parker Mathis an outstanding school. Ralph Brown, former principal of Parker Mathis from 1980-1996, shared colorful anecdotes of being an administrator at Parker Mathis. “As a principal, you must have the ability to change gears. You start the day with great expectations as a principal, but by lunch time, you are nursing a skinned knee,” said Brown. “You have to be a father, counselor, teacher, sheriff, and judge, and I accepted it all willing. Looking at the things that have happened under my tenure as principal, I am very proud. Parker Mathis helped promote parent-student lunchtime and Happy Fridays among other initiative programs. Parker Mathis also promoted the ‘Five R’s’ and if you maintain those aspects, it will carry you through life.” “The Lowndes County school system was founded in 1871 and between then and now, there have been many students that have been associated with the educational success of Parker Mathis,” said Ron Irwin, former assistant to the superintendent. “There are a lot of bricks and mortar involved in building a school or facility, but the character is given by students and teachers,” said Santiago Iturralde of Pinnacle Prime. “We are proud to have the responsibility of building the Westside future of education.” Lowndes Board Member Jason Wisenbaker spoke briefly on the success of Parker Mathis, followed by superintendent Dr. Steve Smith. “There is a partnership that must exist between schools and student, and we want to maintain that relationship as we transition to our new Westside location. Parker Mathis is a jewel and its going to be here always.” Smith also conveyed that the old Parker Mathis building will be used to house the alternative school, New Horizons Academy, and staff development classrooms and offices. During the reunion, the time capsule, slated to resurface the year 2020, buried in 1997 under the direction of former Principal James Goolsby, was dug-up by Assistant Principal Sam Lassiter and will be reburied at the grand opening of Westside Elementary School. Among the newest items to enter the time capsule will be a Pinnacle Prime Frisbee signed by the entire Pinnacle Prime team responsible for building the new school. Beulah Hennly, former teacher from 1984-1999, said, “It’s wonderful to be back, and I always enjoy coming back. It’s just sad in a way to know that there will no longer be a Parker Mathis. We wish Westside could be renamed. But Parker Mathis has always been a great school and the tradition will continue even with the school.” Parker Mathis Elementary thanked the following sponsors: Pinnacle Prime, Valdosta Mechanical, Sunset Farms, Bennett Law Firm, Sam’s Club, Merita, Pepsi, Miller Hardware, Kontroll, Publix, the PTO, Valdosta Fire Department, Bonita Cotton, Lowndes County Fire Department, Title I, LHS and Godfrey Funeral Home.