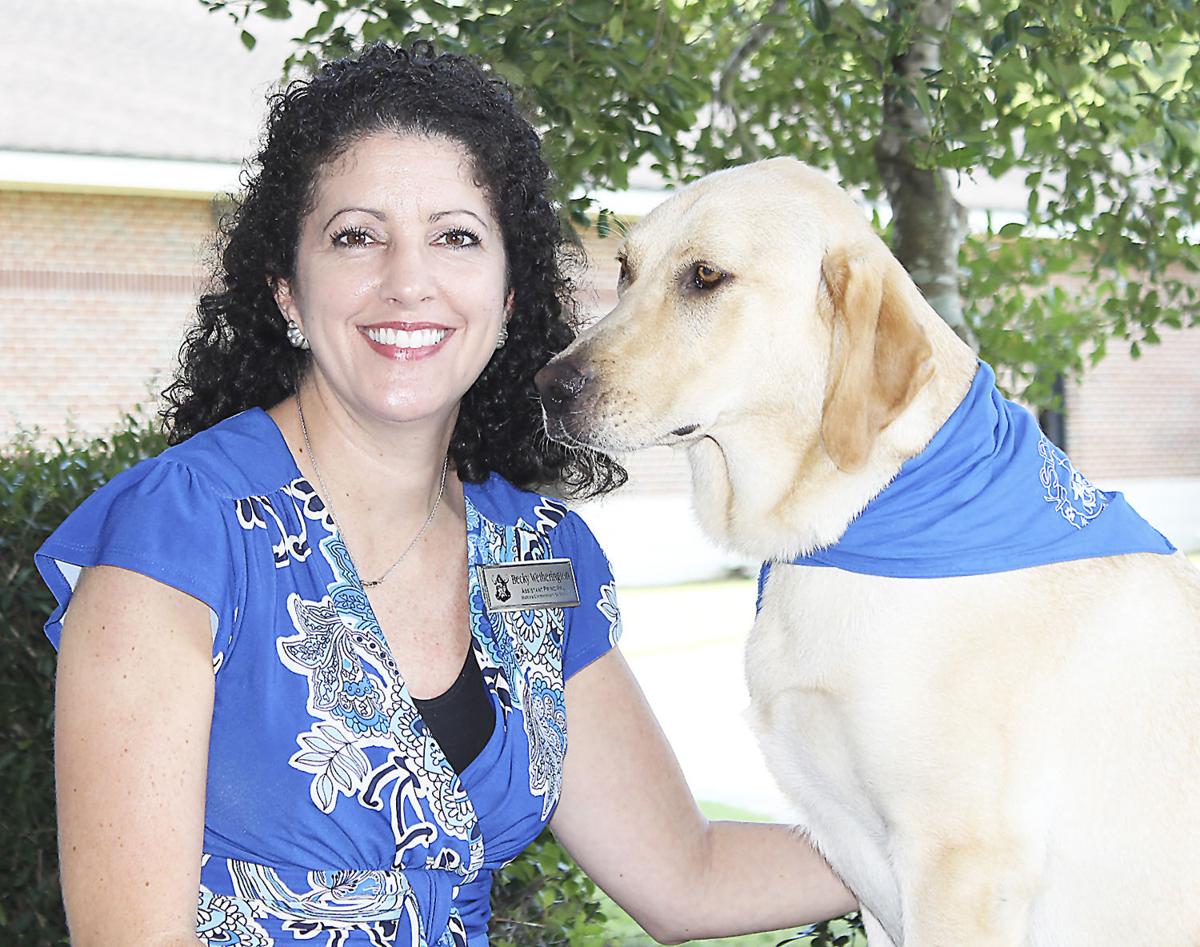 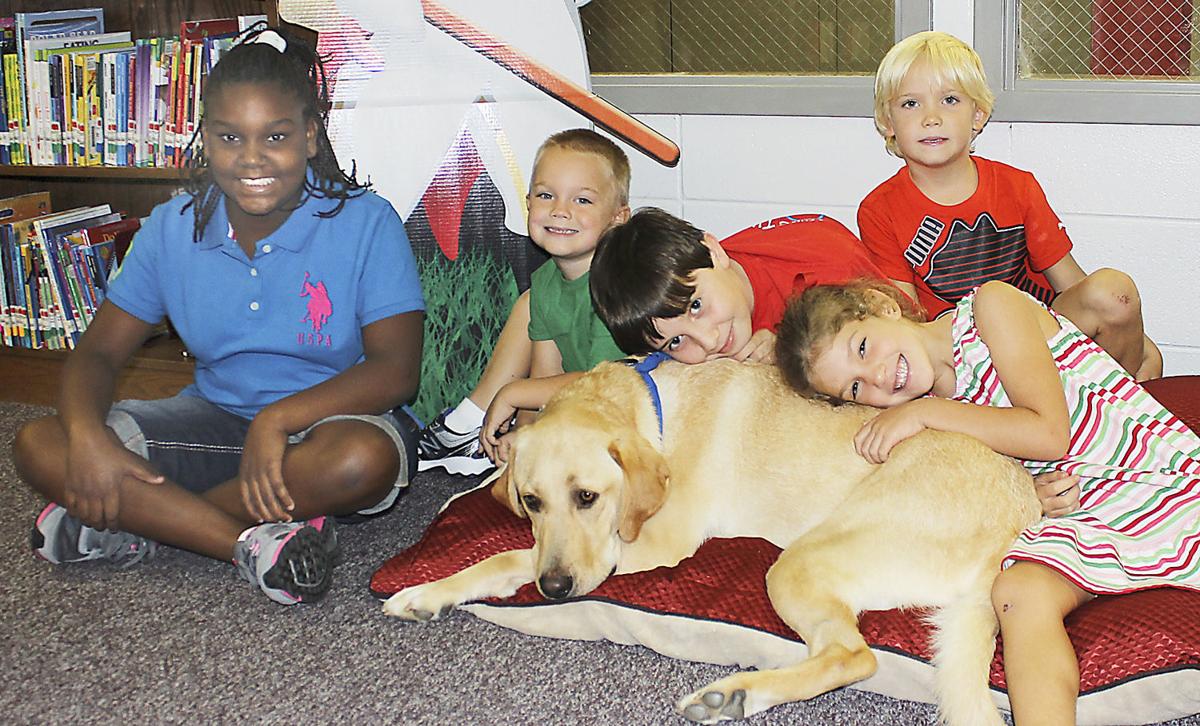 Whidbey is very much the typical Labrador Retriever. Playing fetch is his favorite game but most of all, he love, love, loves to swim! However, something about Whidbey isn’t so typical.

Wetherington brings Whidbey to Hahira Elementary every day and takes Whidbey everywhere she goes. Wetherington has no physical impairments or disabilities and Whidbey’s skills are not tailored to those needs. Rather, Whidbey’s job is simply to be himself.

For Wetherington, Whidbey is a dream come true.

“This is something I always wanted to do,” said Wetherington.

Her interest was sparked ten years ago at a conference when she saw an educator with an assistance dog like Whidbey.

“It sparked my interest because I always had a love for animals,” said Wetherington.

At that time, Wetherington’s family already had two dogs and she just wasn’t prepared to introduce a third one into the home. However, last year their two family dogs (ages 15 and 17) passed away. Though Wetherington’s heart was heavy with grief, she still had enough room in her heart for Whidbey.

“He was very supportive,” said Wetherington.

After receiving permission from the school system, Wetherington had to get letters of recommendation from her vet as well as professional and personal references. Because ADI is non-profit, the process, the dog and the trip to Kansas in July to get Whidbey cost the school system absolutely nothing. All financial responsibilities have been and will continue to be at Wetherington’s expense.

Whidbey had to go through intensive health and temperament testing and spent many months in training to receive his final approval as an intentionally certified assistance dog. Wetherington also went through one week of training with Whidbey.

“It’s all about bonding with the dog,” said Wetherington. “He went everywhere I went.”

Wetherington learned basic commands for Whidbey while in Kansas and even visited various schools, hospitals and nursing homes. It can be assumed that the training was more for Wetherington as Whidbey certainly knows his way around, especially at Hahira Elementary.

Before school started, Wetherington walked Whidbey around Hahira Elementary to get him acquainted with the space. She held off bringing him the first two days of school for obvious reasons of chaos and mayhem that come along with hundreds of young children.

“He’s already made such a difference,” said Wetherington.

Whidbey, without trying, is probably Lowndes County School’s biggest education advocate and a lot of teachers could learn a thing or two from Whidbey’s methods.

Children are excited to come to school because they know Whidbey will be there. He greets students getting off the bus in the morning and walks the halls giving his morning hello’s with the wave of his tail. He offers a nonjudgmental ear to those children learning to read and even has his own “Reading with Whidbey” corner in the library. He assists teachers in the classroom by lending his body to art and will even help in math by allowing the children to weigh and measure him for graphs.

“They also started using him as a writing prompt,” said Wetherington. “What would Whidbey do . . .”

Some of the elementary students will even be using Whidbey as a point of research as Whidbey’s name — after Whidbey Naval Base, Washington state — lends itself to historical and military history.

“ADI names their litters after a theme,” said Whidbey. “His litter is the military litter.”

Yes, Whidbey is a busy dog and how does he keep up with his busy schedule? With Google of course.

“He has his own Google Calendar,” said Wetherington. “Teachers can go on it and schedule times with him.”

Whidbey, in true superstar fashion, will also have his own page on the school’s website.

Wetherington did not enter into her partnership with Whidbey lightly. It took a lot of time, consideration and research.

“The research is phenomenal,” said Wetherington.

Some top universities even rent out assistance dogs before final exams to help calm the nerves of students. In Kansas and Missouri, a lot of the local schools have dogs like Whidbey.

Wetherington even took the time to consider potential drawbacks of having Whidbey at school. The first is children who are afraid of dogs and the second is allergies.

It was explained to the children that they did not have to interact with Whidbey. At first, there were around five students who were scared but who have since learned not to be afraid and love his company.

However, allergies unfortunately are not a choice but that has not been an issue either. Wetherington works closely with the school nurse and learned that most allergies with dogs occur when being in immediate contact with the animal. The few children in the school who do have allergies can pet Whidbey, but just have to be sure to wash their hands right after.

Wetherington also addressed concerns about Whidbey being a distraction. Turns out, Whidbey is much more quiet and patient than any human. He was even able to sit (and also lay and sleep) through a four and a half hour administrative training meeting without as much as a bark.

“He’s not a distraction at all,” said Wetherington.

If you visit Hahira Elementary, you may catch a glimpse of Whidbey lounging in the assistant principal’s office, teaching math, patrolling the halls or sitting in his favorite reading spot, but without a doubt, you will see Whidbey and smile.