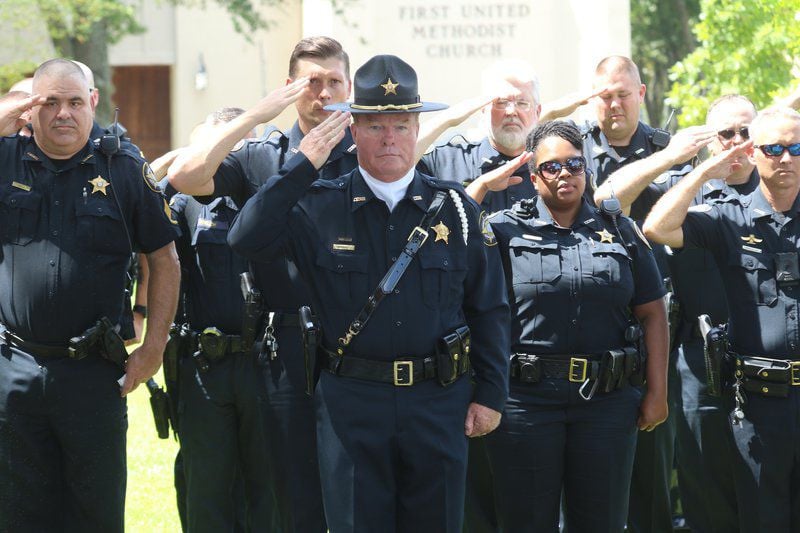 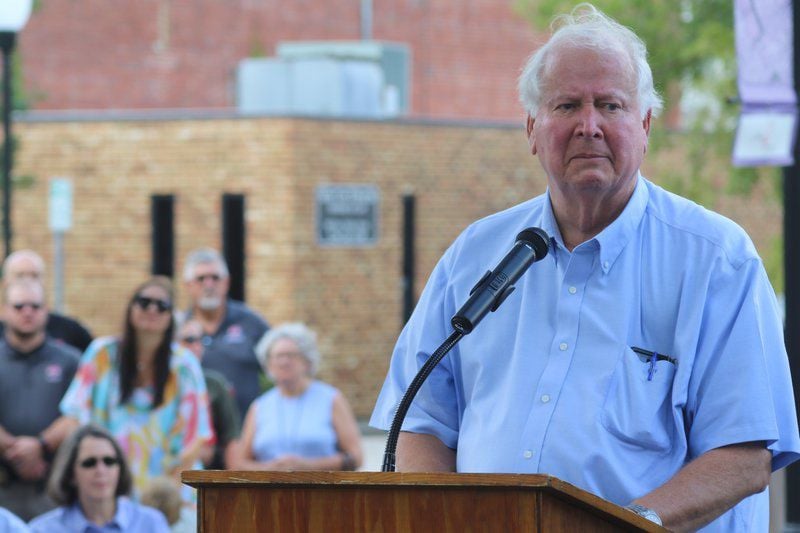 Amanda M. Usher | The Valdosta Daily TimesBen Futch, son of the late Jewell L. Futch, gets emotional as he speaks about the late Deputy Alfred C. 'Dick' Walden Wednesday during a ceremony unveiling a monument to fallen deputies at the historic Lowndes County Courthouse. 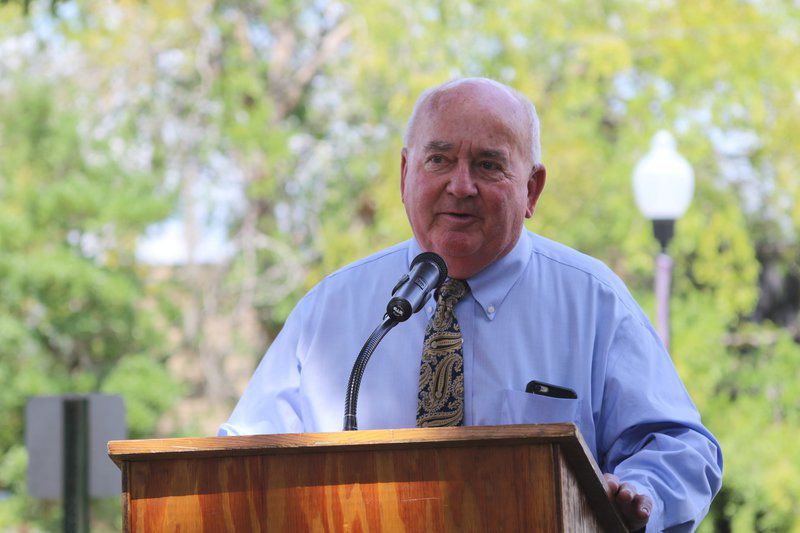 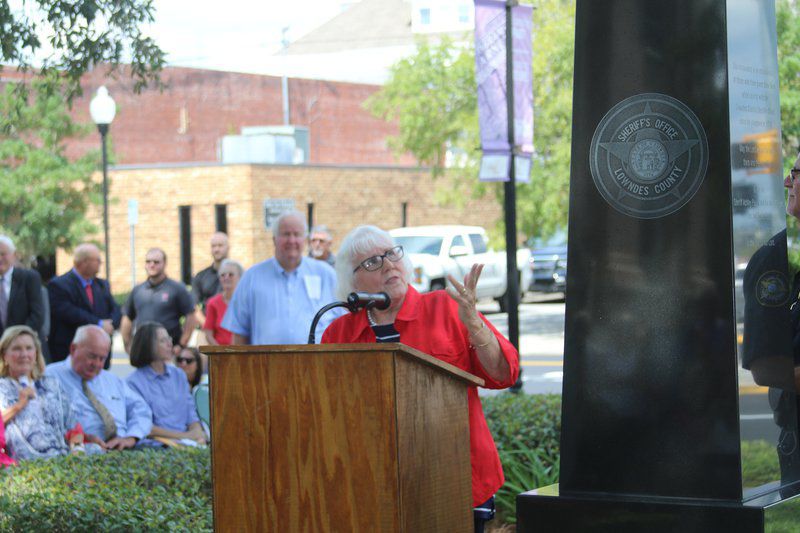 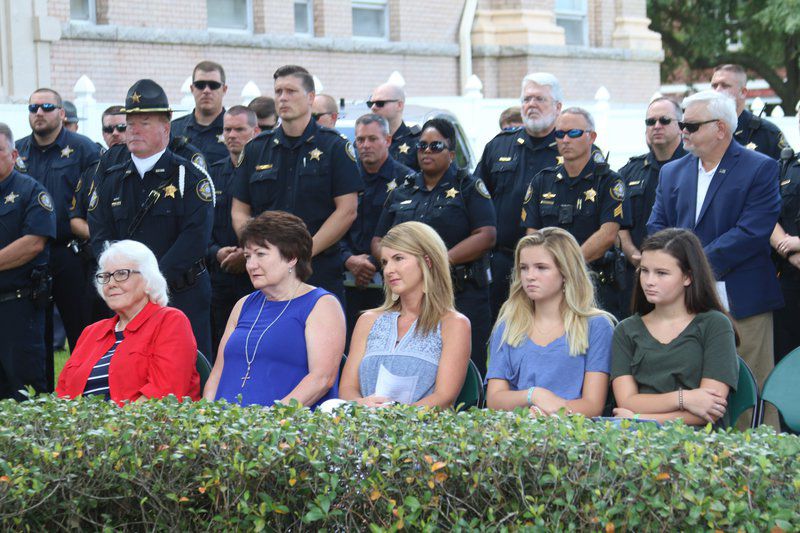 Amanda M. Usher | The Valdosta Daily TimesFamilies of late deputies and members of the Lowndes County Sheriff's Office attend a ceremony unveiling a monument for fallen deputies at the historic Lowndes County Courthouse. 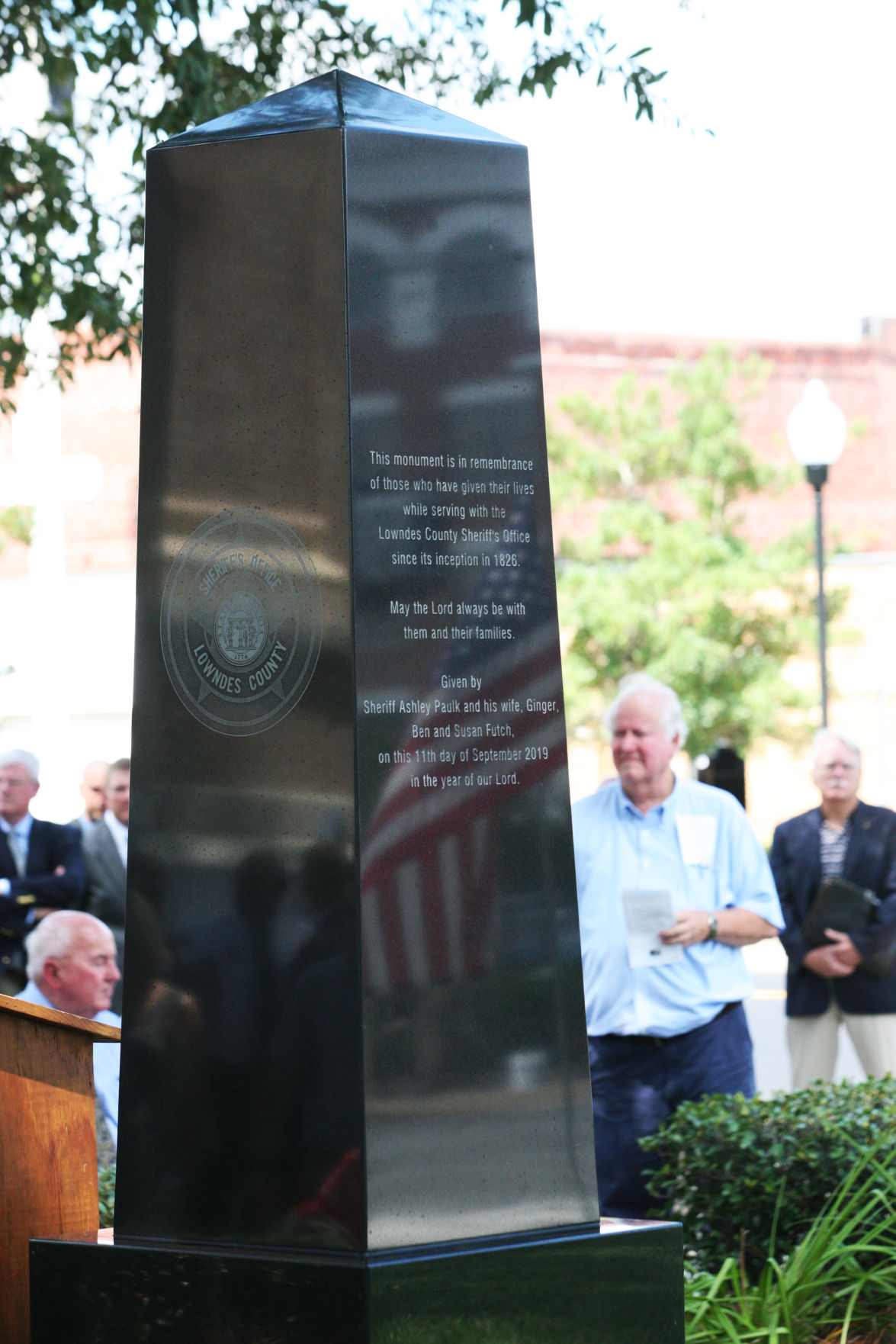 VALDOSTA – Now standing in the heart of downtown, a monument will continue the legacy of four fallen deputies.

The fourth side lists the late deputies by names, ages, departure dates and the sheriffs they served under.

“People will ride by and see it and they will be thankful because we have a country that we can observe fallen officers and a sheriff that will push for it and have it done,” Mary Nell Goff said.

Goff is the great-great-granddaughter of Dixon and is thankful he is being honored.

Dixon, 25, served under Sheriff John T. Adams and was killed Dec. 24, 1854, responding to a domestic disturbance in Troupville.

Walden was headed home after working a shift when he pulled over a speeding car, Ben Futch said.

Unbeknownst to Walden, the people in the car had just robbed and beaten a man to death in Thomas County, he said.

During the traffic stop, Walden was shot in the back by a male in the car. The bullet damaged major organs.

“Deputy Walden was driven to the hospital in his own patrol car by a … driver who was operator of the drive-in restaurant where the gun violence occurred,” Ben Futch said after a brief pause.

He concluded saying his father was proud of Walden and said not only did Jewell Futch lose a deputy, he lost a longtime friend.

Bryan Rowe, with Gary Rowe by his side, spoke during the ceremony for their brother, John Hall Rowe Jr.

“I’ve walked in their shoes so I know what it is,” he said. “It’s just I happen to be here and they’re gone.”

A truck driver under the influence of either drugs or alcohol intentionally hit Rowe on the interstate. The deputy was on the median and the driver “meant to kill him,” Sheriff Ashley Paulk previously said.

Bryan Rowe said his brother will be remembered thanks to the monument.

Elizabeth Butler – alongside Heather Neel, Chris Butler’s widow, and their daughters – stood at the podium and expressed her son’s love for law enforcement.

He would share stories with his twin daughters from his day’s work, she said.

While responding to a domestic violence call, Butler’s vehicle was struck by a truck driver who pulled into Chris Butler’s lane despite the officer’s blue lights flashing.

He served under Paulk.

During her speech, Elizabeth Butler advocated against the use of marijuana and cocaine.

She urged the audience to ask their loved ones not to use drugs and drive.

“If you would do this for your loved ones, then my loved one can continue his legacy of serving and protecting,” she said.

The Georgia State Patrol Honor Guard opened the ceremony with a presentation of colors and closed with the playing of “Taps.”

Lowndes County Chaplain Rev. Mike Davis led the ceremony and it concluded with a prayer.