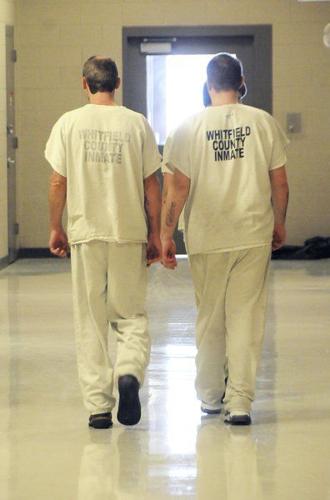 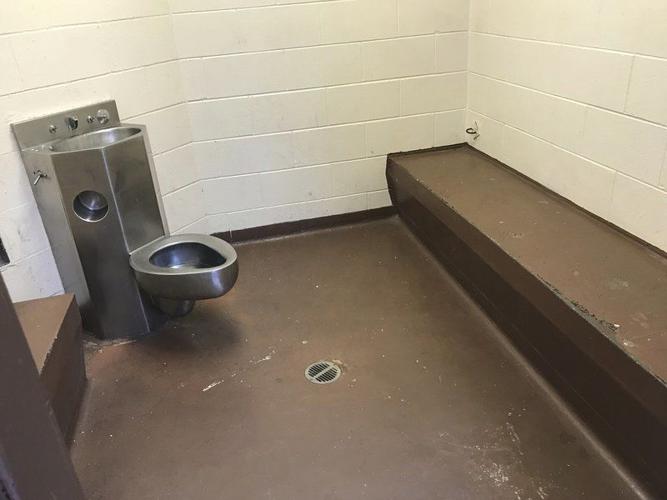 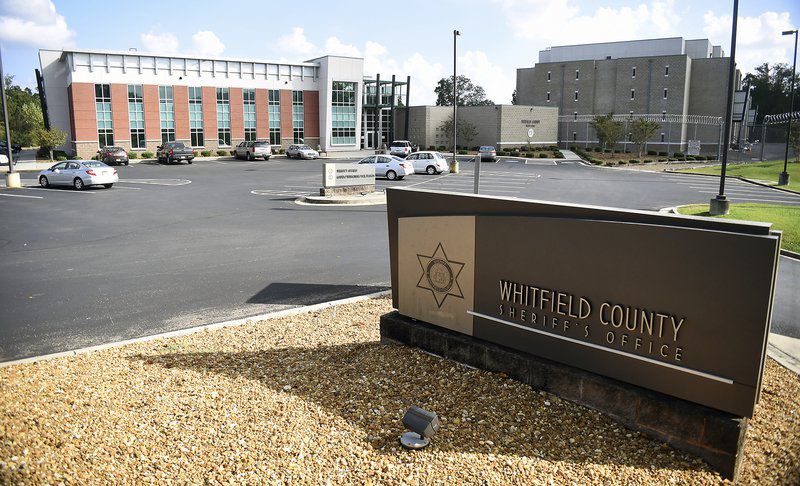 Matt Hamilton | Daily Citizen-NewsOfficials with the Whitfield County Sheriff's Office say jail inmates tend to be in poorer health than the general public. 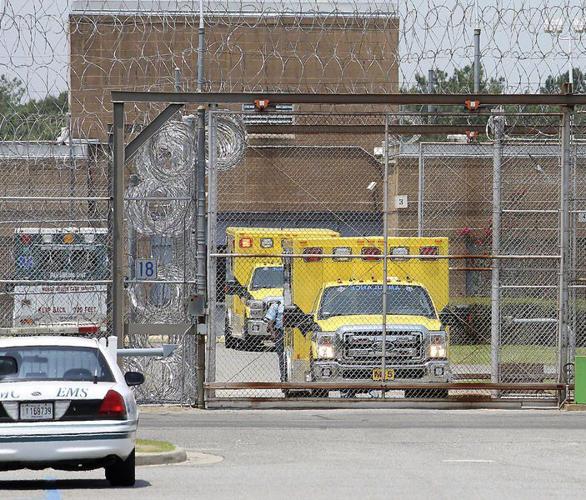 VALDOSTA — When inmate Thomas Willis died at Valdosta State Prison, his daughter didn't find out about it from prison officials.

"I had sent a letter to my father which came back stamped 'Return to sender: inmate dead,'" said Jordan Fisher. 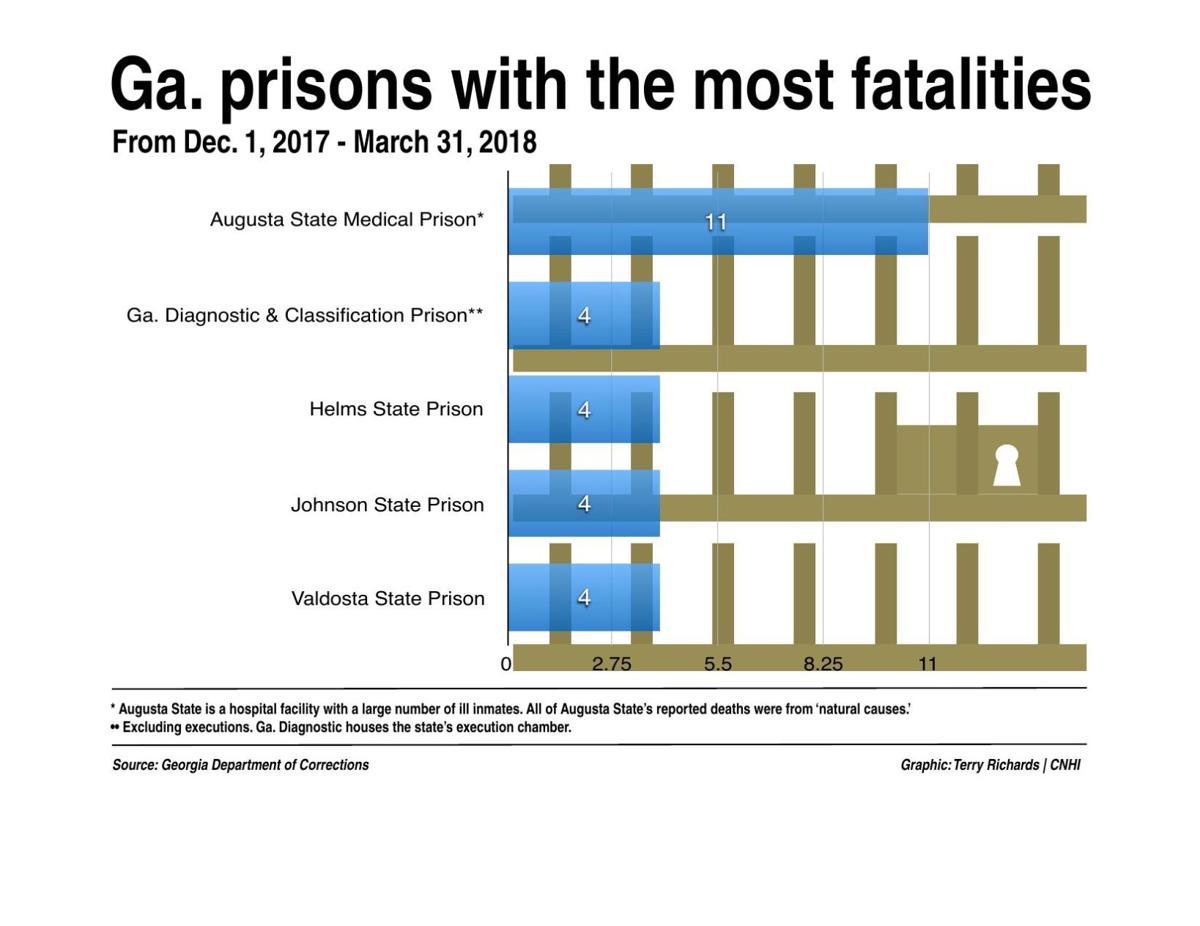 Likewise, the family of Mateo Diaz — whoever he is — may not get the full story on his death.

Diaz died in the Colquitt County Jail in 2015, a case of suicide by hanging. Arrested on a vagrancy charge, he had no identification on him; he received a pauper's funeral by cremation.

Deaths of incarcerated prisoners cause grief and problems not only for the jail staff who have to deal with the situation but with family members trying to get information on what happened.

The SunLight Project team — representing local newspapers in Valdosta, Moultrie, Tifton, Thomasville, Milledgeville and Dalton, Ga., and Live Oak, Fla. — took a look at the impact the deaths of inmates have in their towns.

Jordan Fisher never knew her father. She says Thomas Willis ran out on her mother while she was still pregnant. Growing up without a father "pretty much ruined my life," the 22-year-old Canton resident said.

Fisher said her father's mother denied she was his child.

"Mom told me someone else was my father until I was 12 years old," she said.

Willis had been in and out of prison most of his life, Fisher said.

Trying to open a dialog with her father, she located him through an online inmate search site. Fisher mailed him the letter which came back stamped with the news of his death.

Fisher said she tried to get details from state officials about what happened, but to no avail.

"When I called (Valdosta State Prison), I was crying, and they laughed at me and said 'How old are you?'" she said.

What she knows about her father's death came from letters his cellmate wrote to her, claiming Willis killed himself because "officers did not do their job," Fisher said.

When the SunLight team filed a request for the results of the investigation and autopsy into Willis' death, the state Department of Corrections denied the request. A department attorney said such things are considered "confidential state secrets" not subject to Georgia's Open Records Act.

The state Attorney General's office directed all inquiries about Willis' death to the corrections department, which had not answered numerous phone calls and emails requesting an interview for this story.

One document the corrections department did share was a brief incident report on Willis' death.

According to the report, an inmate was beating on his cell door, yelling that his cellmate was dead; Willis was found hanging from a light fixture by a sheet. CPR was attempted, he was wheeled to the prison's medical section and EMTs were called, but it was no use. Willis was pronounced dead by the EMTs, the report states.

When an inmate in county custody dies behind bars, the Lowndes County Sheriff's Office, which runs the county's jail, has procedures to follow, Sheriff Ashley Paulk said.

"We call outside medical help, the coroner and can bring in an outside agency like the Georgia Bureau of Investigation to do an autopsy," he said.

Efforts are made immediately to notify the inmate's next of kin, the sheriff said.

"Most of these guys fill out contact information when they're booked, so we know who to call," the sheriff said. "The majority of inmates have a lot of contact with their families."

In the case of Mateo Diaz — Colquitt County's mystery inmate — no one came forward to claim the body. Police were unsuccessful in finding someone who could identify him. Perhaps, officials speculated, he had been in a group of migrant farmworkers and was separated from them.

“He was cremated under our county cremation (program) for paupers,” Colquitt County Coroner Verlyn Brock said.

No one realized Diaz might kill himself. He had been placed by himself in a holding cell after he got under a bunk in one of the day rooms in the general population and refused to come out.

On July 2, 2015, jail staff serving the last meal of the day found him hanging from a towel hooked to a window bar in the solitary cell, said Capt. Julius Cox of the Colquitt County Sheriff's Office.

He was last seen alive at about 12:30 p.m. that day when staff fed inmates lunch. Cox said Diaz had given no indication he was a suicide risk.

Of the six deaths at the Colquitt jail since 2001, two were suicides, according to figures provided by the jail.

"For many suicides, there's no prior indication" an inmate might kill himself, Lowndes Sheriff Paulk said. "If you know they're suicidal, you can keep them under constant watch."

But when there's no sign, and "they're sitting in a cell alone, no cellmate," a despondent prisoner could kill himself between guard checks, he said.

Since 2002, there have been six suicides by hanging at the Lowndes jail, according to numbers provided by the sheriff's office. There have been 18 inmate deaths from all causes since 2002.

In Baldwin County, Major Lynnette LaRocque of the sheriff's office recalled one jail death in the 1990s when an inmate is believed to have hung himself accidentally in an attempt to convince jailers he was mentally ill. No inmates have died within its walls during the past 10 years.

Of the five inmate deaths at Valdosta State Prison in the last six months, three were suicides, according to information from the Georgia Department of Corrections. In 2014, a report by the Southern Center for Human Rights cited Valdosta State Prison as tied for second place for the most homicides in a Georgia prison.

Isaac Gregory Jr. had been in the Suwannee County, Fla., jail for nearly three months when he received a breathing treatment Jan. 5, 2010.

When Gregory, who had issues with asthma, complained the treatment wasn’t working, the jail’s physician, Dr. Andrew Bass, was called in to see the inmate.

After Bass arrived, Gregory lay his head back in his wheelchair and passed away of an apparent cardiac arrest, according to a previous article in the Suwannee Democrat.

That was the last time an inmate died at the jail.

"A lot of these guys who are booked into the jail aren't in good health," said Lowndes' Sheriff Paulk.

Of the 18 Lowndes jail deaths since 2002, the majority are listed as being from various health problems — heart attack, AIDS, enlarged heart, extreme high blood pressure, cancer and more.

"We have an extensive medical facility" at the jail, and inmates needing more advanced care are taken to the hospital, Paulk said.

"Plus, often, if one of these guys calls Momma on the phone and says, 'I don't feel well,' Momma turns around and calls us and we look into it," the sheriff said.

Such calls, though, are often an attempt to use sympathy to get someone to add money to an inmate's jail canteen account, he said.

"You never want to have people dying from abuse or a lack of medical care," Thomas County Sheriff Carlton Powell said. "We do take pride in the conditions of our jail.”

The last death at the Thomas County Jail was in November 2006, when an inmate died from a heart attack.

The service includes a full-time jail nurse, dispensing of medication and mobile X-ray and dental services.

"We've got new people coming in all the time. On any given day, we might have 450, we might have 500 people in custody, maybe more, depending on the time of year," Whitfield County Sheriff's Office Capt. Wesley Lynch said. "People in jails are more likely to have mental illness than those on the outside. That's a struggle for us. More people in jail than in the general public have drug dependency issues, so we have to deal with withdrawals and things like that. And those people, because of what they are putting into their bodies, tend to be less healthy than the general public.

"On top of that, people in jails tend to live lifestyles where they put themselves at risk and they are more likely to have acute injuries than the general public. They've been in fights. They've been in car wrecks," Lynch said.

The last known inmate death in Tift County was in 2012, when Shelton Ray Floyd, 60, was taken from the jail to Tift Regional Medical Center, where he died, according to the Tift County Sheriff's Office.

End of the Line

For Mateo Diaz, who died in Colquitt County's jail, the end came with cremation and a pauper's funeral.

Jordan Fisher doesn't even have that amount of closure with the death of her father, Thomas Willis, at Valdosta State Prison.

Trying to find out about funeral arrangements, she called the local coroner, who said he didn't know when the prison system moved Willis' body, she said. The City of Valdosta had no record of his death, Fisher said.

"I have no idea where he is or what they did with him," she said.