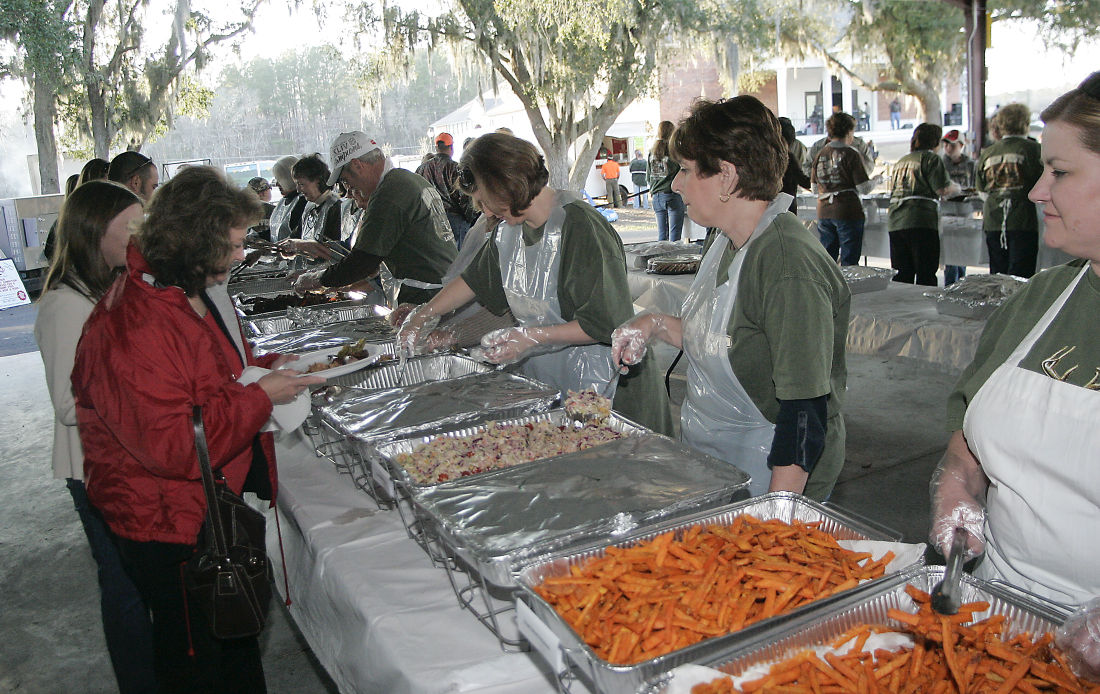 Deer Fest included a wild game dinner with fried elk and deer sausage as well as side dishes. 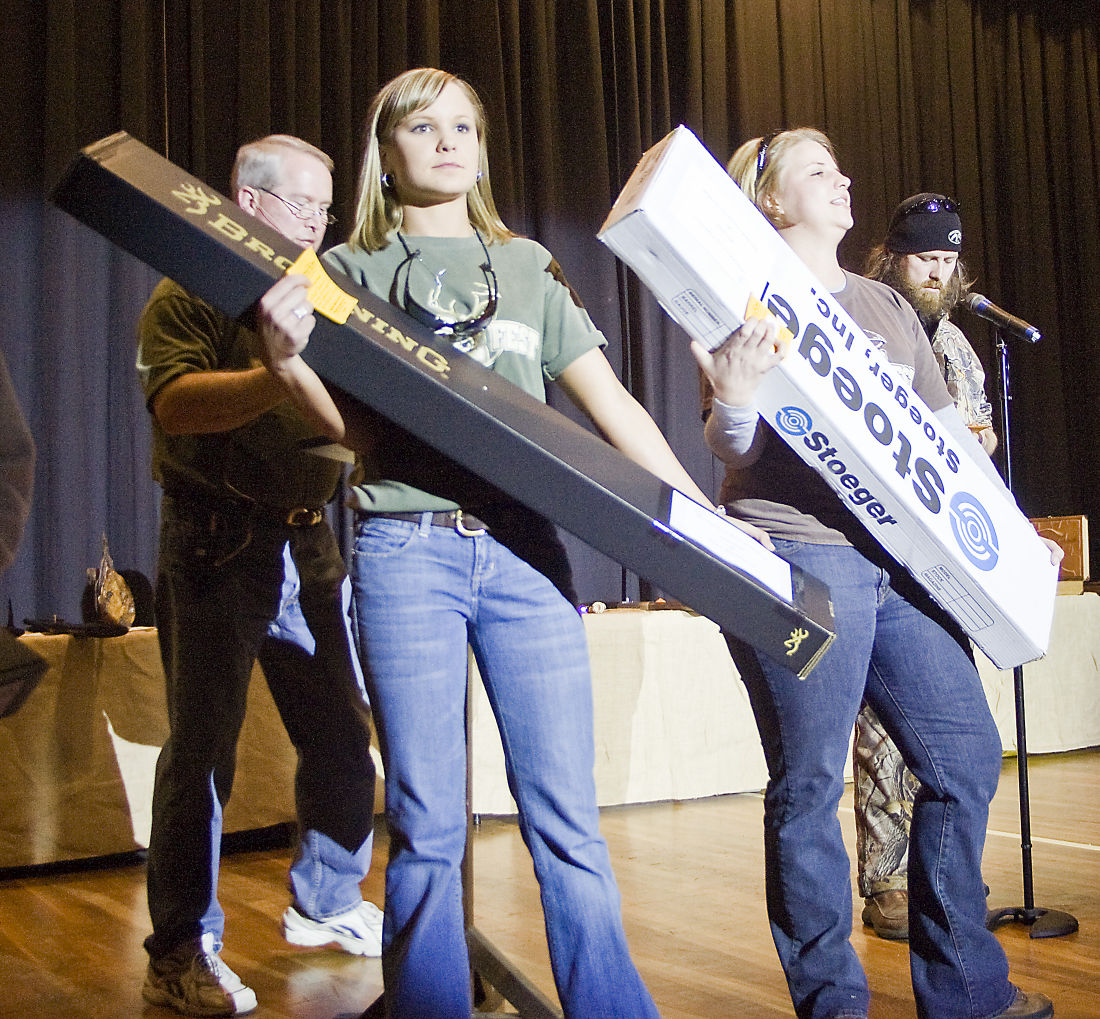 Two volunteers hold up shotguns being raffled at the Deer Fest Saturday in Lakeland. 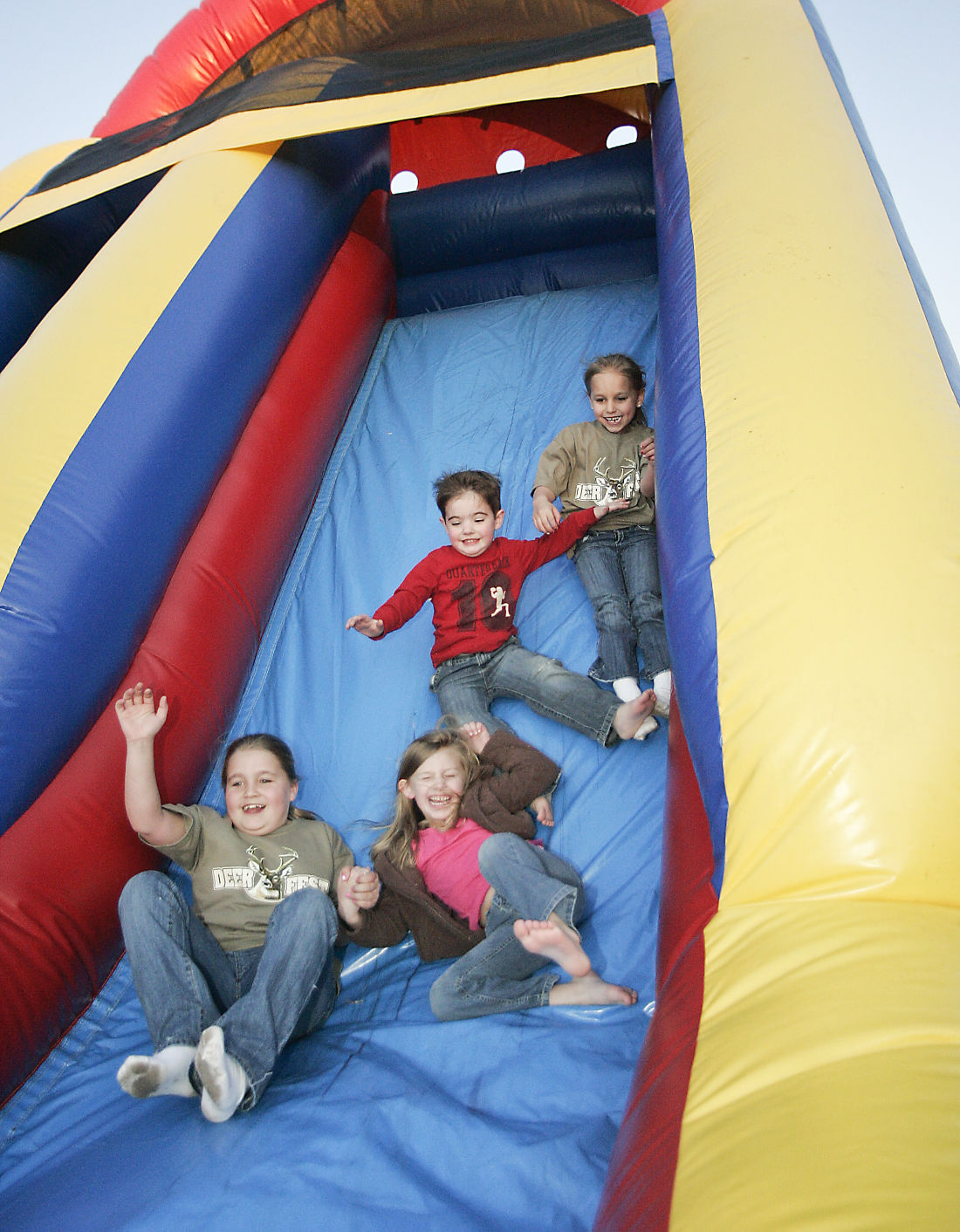 Ansley Brogdon, Emily Ann Livingston, Jackson Squires and Ava Brogdon are all smiles as they slide down the inflatable slide at Deer Fest in Lakeland Saturday.

Deer Fest included a wild game dinner with fried elk and deer sausage as well as side dishes.

Two volunteers hold up shotguns being raffled at the Deer Fest Saturday in Lakeland.

Ansley Brogdon, Emily Ann Livingston, Jackson Squires and Ava Brogdon are all smiles as they slide down the inflatable slide at Deer Fest in Lakeland Saturday.

Guests flooded the grounds of the Jim and Mary Threatte Arts & Civic Center at 1 p.m. to inspect 25 live auction items and more than 40 silent auction items, and peruse booths from local vendors.

Participating for the third year, Duane and Rhonda Stokes of Big‘uns Jelly and Relish sold their homemade condiments to many local families. Both agreed meeting new people and reconnecting with old friends were the best aspects of the event.

The stars of The Outdoor Network’s hit series Duck Commander were this year’s main attraction. The reality show is based on a christian family-owned company that has manufactured duck calls since 1972. Its second season will air this summer.

Jase Robertson and other family members were on site signing autographs, selling their high quality products, and motivating kids to get involved in hunting.

“Each year, there are less people involved in hunting,” said Robertson, who said he embraced the sport at a young age as a way to remain true to his faith and learn more about nature and conservation. “It’s really a lifestyle — a clean, family-oriented sport that is sanctioned by God. We want to get young people excited about the sport.”

Ritchie Wisenbaker, 10, was thrilled to meet the television star, who lives his life focused on three priorities — God, family and hunting. Ritchie attended Deer Fest with his father, Ricky, who plans to take the young hunting enthusiast water foul hunting for the first time this year.

“It was cool to meet (the Robertson family),” Ritchie said. “It’s good that they show kids its okay to believe in God. He will bring the ducks out.”

The program began at 7 p.m. with special performances by the “Blues Brothers,” played by Ron Borders and James Lee Herndon and an Elvis Presley impersonator. At age 96, Mary Threatte joined the performers on stage for a lively rendition of “If You’re Happy and you Know it.”

Created in 2005 by the Oak Lawn Foundation, Deer Fest was the primary fund-raiser for the foundation’s efforts to move the abandoned Lanier County High School gymnasium and renovate it into a valuable community center. In late 2005 and early 2006, the building was quartered and each brick-and-wood section hydraulically lifted onto trailers and transported to its current home.

Named for Jim and Mary Threatte, a past Lanier County school superintendent and his wife, it serve as a location for art exhibits, concerts, plays, organizational meetings and other events for both Lanier County and South Georgia.

Larry Lee, CEO of Farmers and Merchant’s Bank and head of the Oak Lawn Foundation, announced that proceeds from the event would benefit several local groups. The Louis Smith Foundation, which supports the local hospital, will receive $25,000; the Lakeland-Lanier County Fire Department will receive $2,500; the recreation department will receive $3,000 to begin work for restroom facilities for the women’s softball team; and the remaining amount will go to upkeep for the Threatte center.

Which do you prefer: early voting or voting on Election Day?