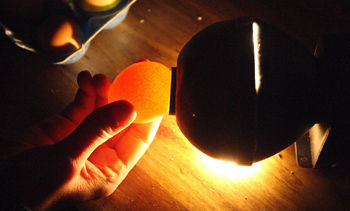 Kathryn Thornhill, compliance specialist with the Georgia Department of Agriculture, candles eggs being judged in the 60th Annual Lowndes County Ham and Egg Show and Sale at the Civic Center on Tuesday. This process allows her to check to see if the eggs have any cracks, chicks and other defects. 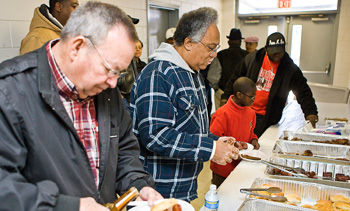 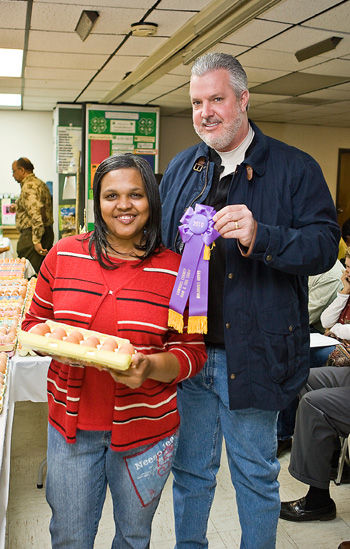 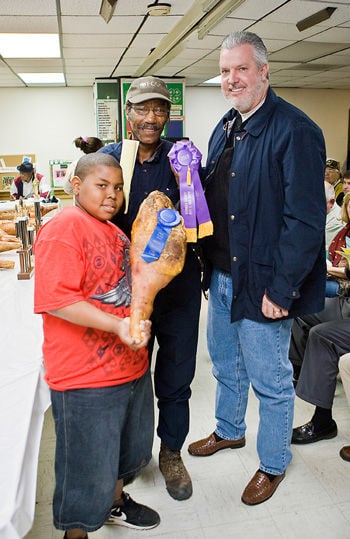 Kathryn Thornhill, compliance specialist with the Georgia Department of Agriculture, candles eggs being judged in the 60th Annual Lowndes County Ham and Egg Show and Sale at the Civic Center on Tuesday. This process allows her to check to see if the eggs have any cracks, chicks and other defects.

VALDOSTA — Patrons walked away with prize hams and eggs by the dozens during the second day of the 60th Annual Ham and Egg Show and Sale Wednesday. Prior to the bidding, patrons enjoyed Southern delicacies like country-cured ham, sausage, cathead biscuits with cane syrup, pound cake and tea cakes. Auctioneer Donald Patten started the bidding with the grand-prize-winning eggs, which were entered by Martha Lucas. After about 10 minutes of bidding, Cass Burch of Cass Burch Chrysler walked away with two dozen of the eggs for $450. The reserve-champion eggs, entered by Melva Morfaw, were purchased by 100 Black Men of Valdosta for $350. Other prize-winning eggs were sold for as much as $112.50 per dozen. The remaining eggs were distributed to various patrons for $20 per dozen. The grand-champion ham was cured by Douglas Battle. Cass Burch won the bid for Battle’s 15-pound ham, at $750, or $50 per pound. Burch also purchased the 12-pound reserve champion ham, cured by Aurayla Perkins, at $300, or $25 per pound. Other fancy, choice and good hams were sold for as much as $10 per pound. Repeat buyers included Cass Burch, 100 Black Men of Valdosta, AgGeorgia Farm Credit, Davis Electric, Farmers and Merchants Bank, Shiloh Farms, Smokin’ Pig, Southeast Ag and several more. Lowndes County Extension Agent Calvin Willis deemed the show a success this year, emphasizing the addition of the mobile unit for computer courses offered outside the civic center. Willis also commended the quality of hams that were entered this year. “Of 69 hams that were entered, 32 were graded fancy,” he said. “There was also no spoilage.” Sponsors for the event include the Valdosta-Lowndes County Chamber of Commerce, Lowndes County Improvement Association, Lowndes County Farm Bureau, Lowndes County Extension and Fort Valley State University. Ham and Egg Show was originally held to encourage black farmers and 4-H members and to promote the best agricultural practices. The first Ham and Egg Show was coordinated by Otis Samuel O’Neal at Fort Valley in 1916. In 1950, John Saunders and the Black Farm Bureau established the first Ham and Egg Show in Lowndes County. Through the years, the event has continued its mission to provide farmers with the best methods for producing high-quality foods as well as good preservation techniques. Among the members of the Black Farm Bureau was Laura Lucas of the Lucas family. Lucas, who has participated in Lowndes County’s Ham and Egg Show every year since it began, passed away Friday. “It deeply saddens our hearts to lose Ms. Laura,” Willis said. “Several people in her family were not in attendance at this show this year because of her passing. She and her brother, Ivory Lucas, have always been strong supporters of the show.” Willis said that Lucas’ son entered some eggs in this year’s show in her honor.