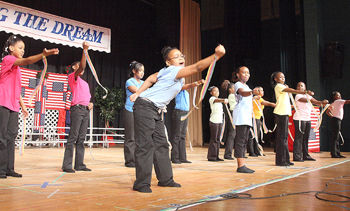 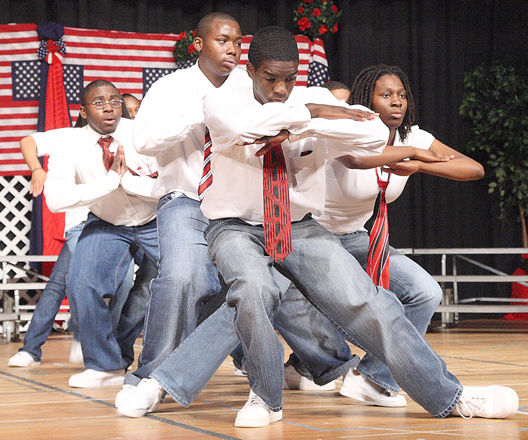 VALDOSTA — Parking was scarce at Mathis City Auditorium Monday. Drivers parked anywhere they could find room — on the grass, along the curb — any available spot that was not a tow-away zone prior to the beginning of the 2009 Dr. Martin Luther King Jr. Youth Showcase. Monday’s event marked the 24th annual observance celebrating the birth, life, words, and achievements of the renowned civil rights leader but had the distinction this year of also celebrating today’s inauguration of President-elect Barack Obama. The stage front at Mathis City Auditorium was draped with red, white, and blue flag bunting. The same material was used as a backdrop for the risers and to adorn the podium for the talent showcase, which featured song, dance, poetry, and inspiring oratory. Above the risers hung a banner with the phrase “Living The Dream” in large, bold letters. Stevie Wonder’s “Happy Birthday” played over the house speakers as people filed in to take their seats or stand while waiting for the show to start. Most, but not all, of those who took the stage were teenagers or younger. The Valdosta High School Naval Junior ROTC presented the colors, after which those assembled joined in the Pledge of Allegiance, followed by the invocation. The showcase featured more than a dozen performances by groups such as Union Cathedral, Tabernacle C.O.G.I.C. Youth Choir, Poetic Magic and others. All participants had studied and rehearsed in preparation for their routines, as was evident from their performances. During the program, which lasted approximately two hours, the audience was intermittently moved to standing ovations or spontaneous applause at various points. All of the performing groups and individuals had an inspirational message of some kind, in keeping with the Dr. Martin Luther King Jr. Day celebration and upcoming inauguration. The keynote speaker was JaCory L. Sermons, a 16-year-old Valdosta High School student who, besides being actively involved in school and church related-organizations, has been part of several Youth Day programs in the past. His speech drew heavily on Dr. Martin Luther King Jr.’s “I Have A Dream” and other speeches. Toward the end of the speech, Sermons asked all the adults in the audience to stand, look at a child near them, point and say: “You can make a difference.” He then requested all the children to stand and say the same thing to the adults who had just spoken to them. Sermons then asked all those standing to say together: “We can make a difference.”