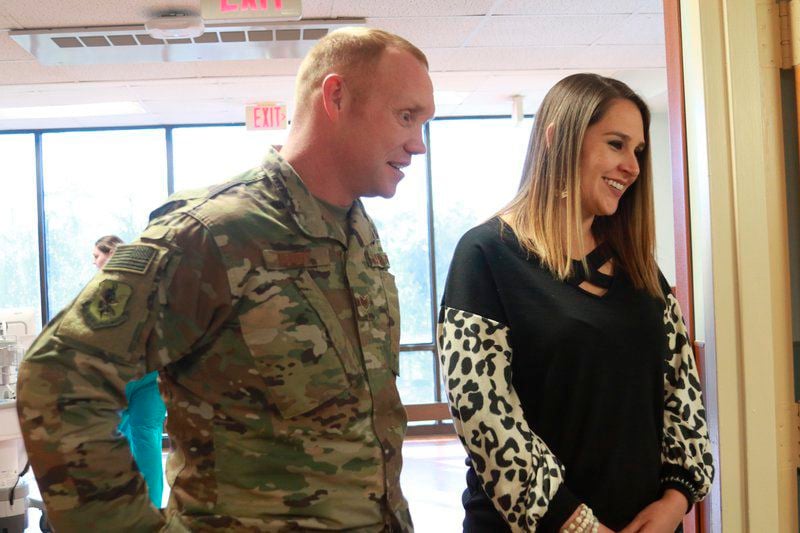 Amanda M. Usher | The Valdosta Daily TimesStaff Sgt. James Mondy of Moody Air Force Base and his wife, Chelsey Mondy, are part of a volunteer group that visited patients of the Lake City VA Medical Center in Lake City, Fla. They donated items to the center and spoke with inpatient veterans as they toured the facility. 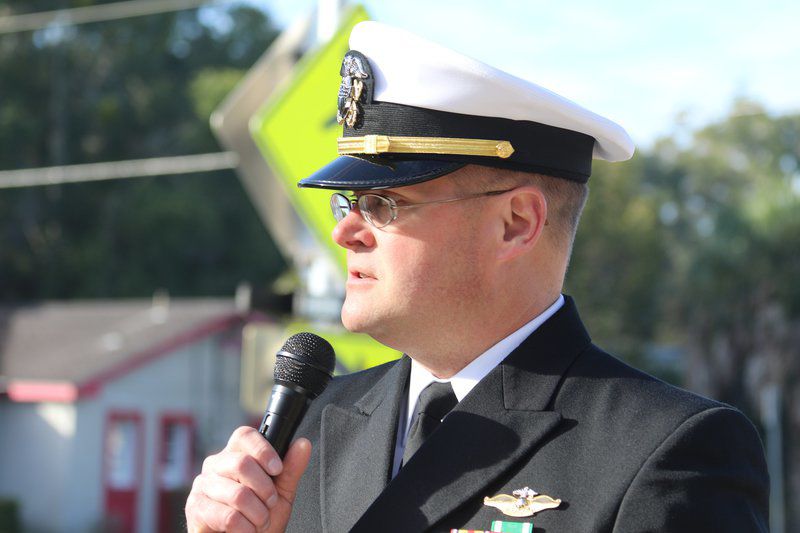 Amanda M. Usher | The Valdosta Daily TimesChaplain William Daniel of Naval Submarine Base Kings Bay leads a Pearl Harbor remembrance recently at the Lake City VA Medical Center in Lake City, Fla. The tribute was an addition to a motorcade that benefitted the facility's inpatient veterans. 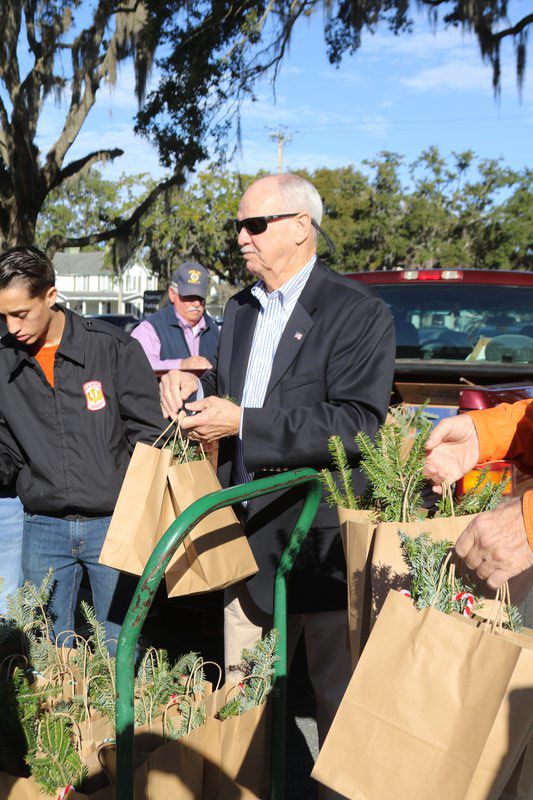 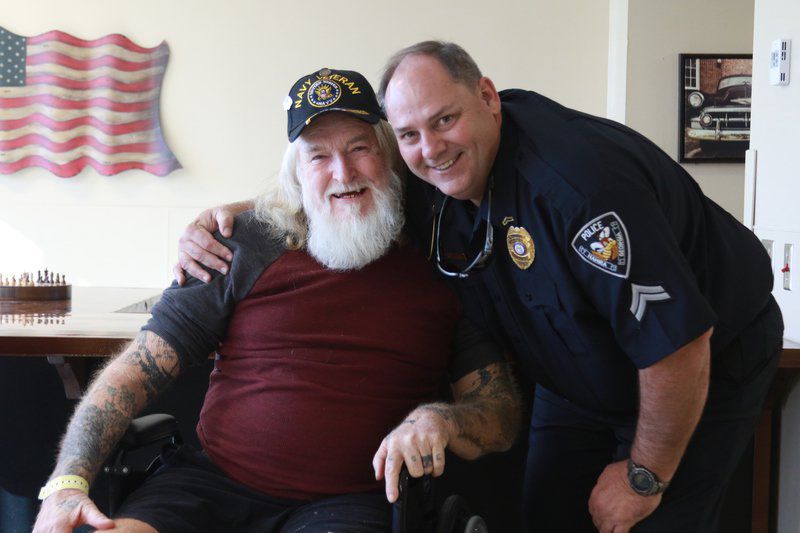 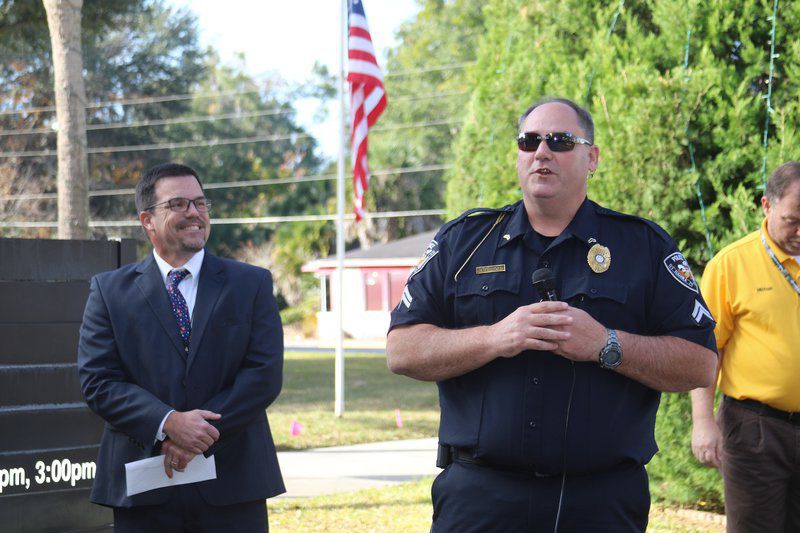 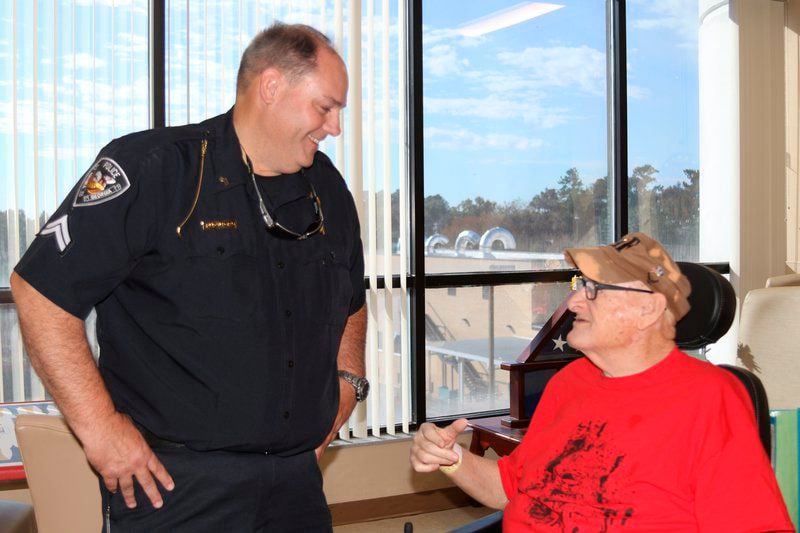 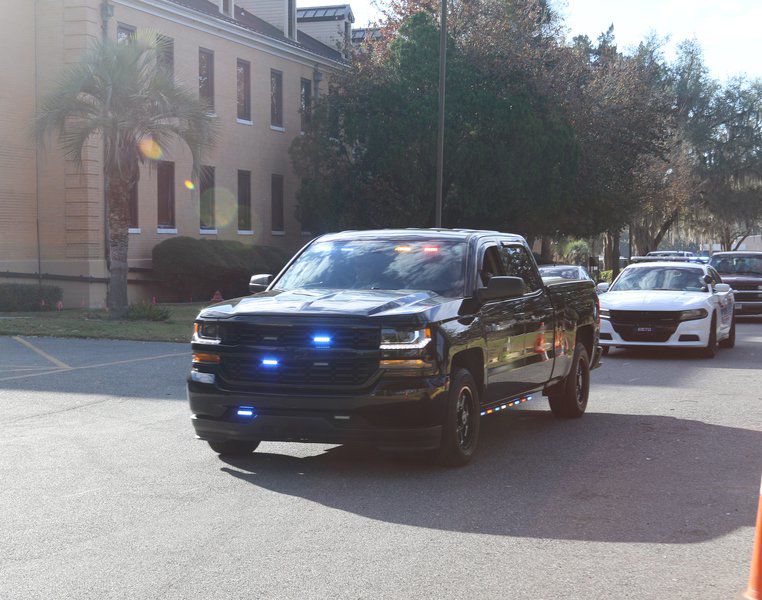 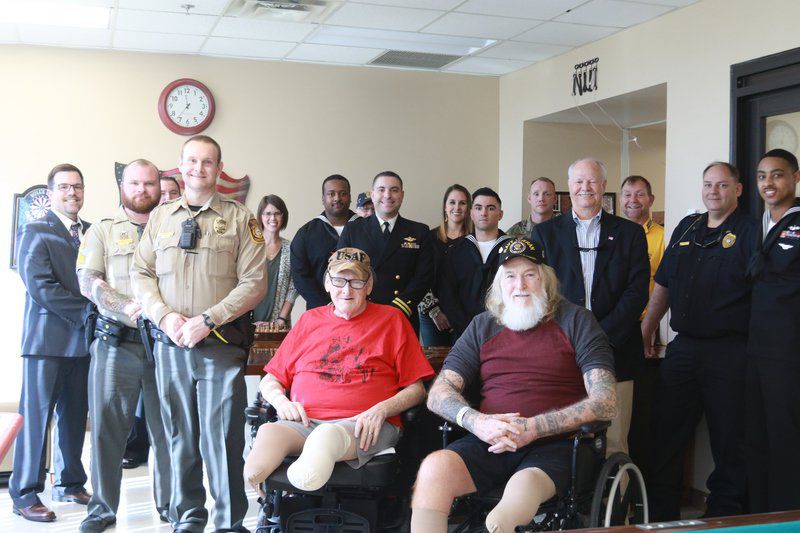 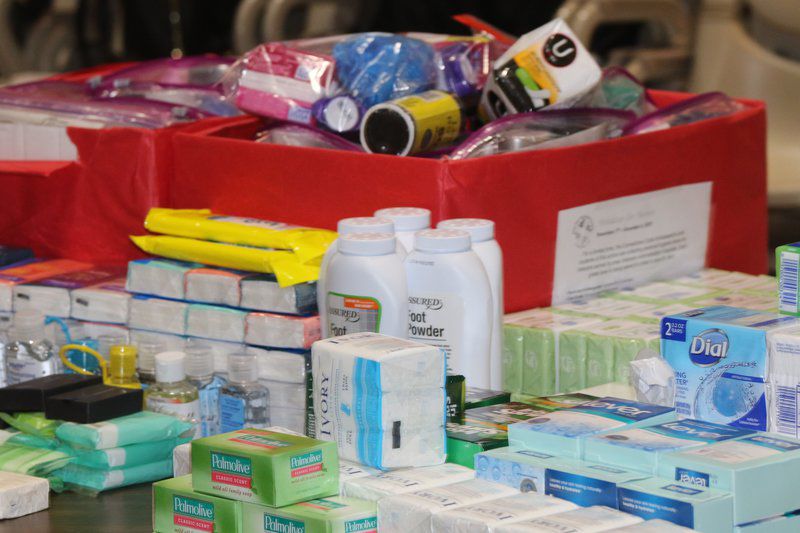 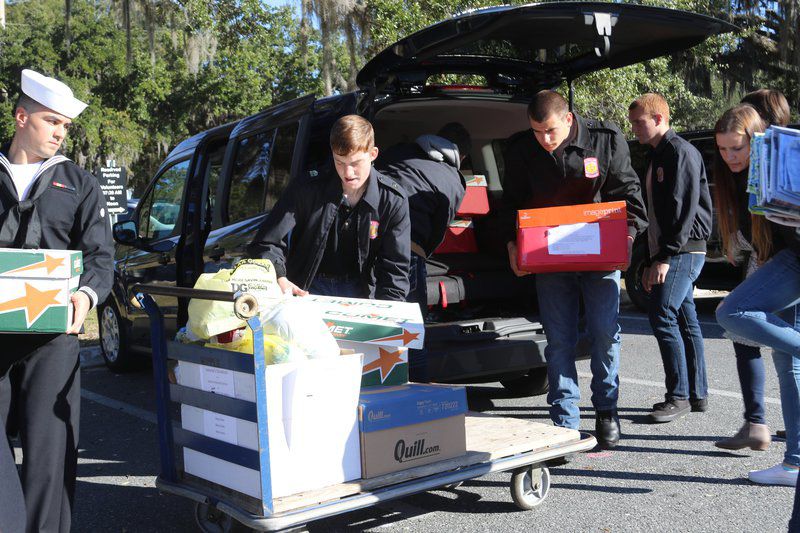 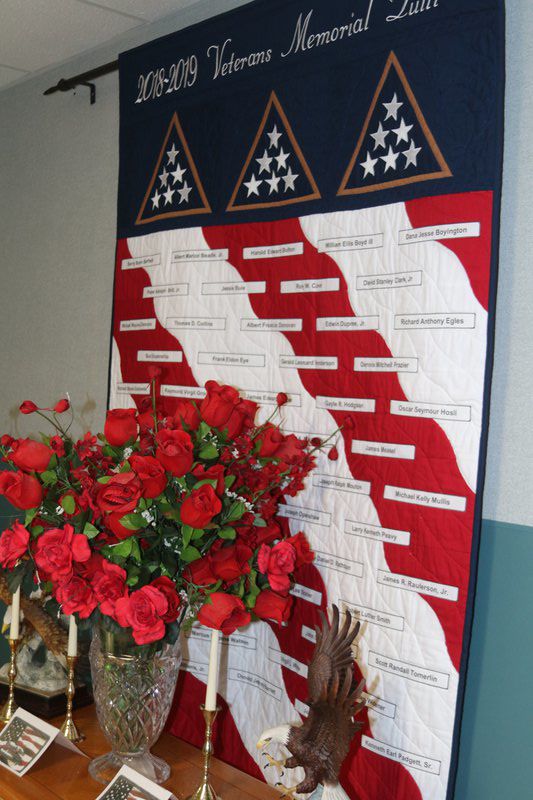 Amanda M. Usher | The Valdosta Daily TimesA veterans memorial quilt hangs in the hospice wing of the Lake City VA Medical Center in Lake City, Fla., and displays the names of veterans who died while in hospice at the center. 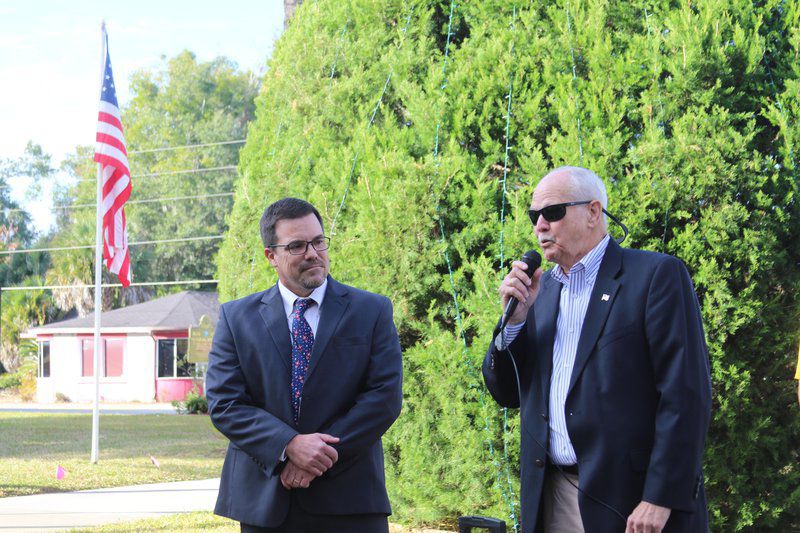 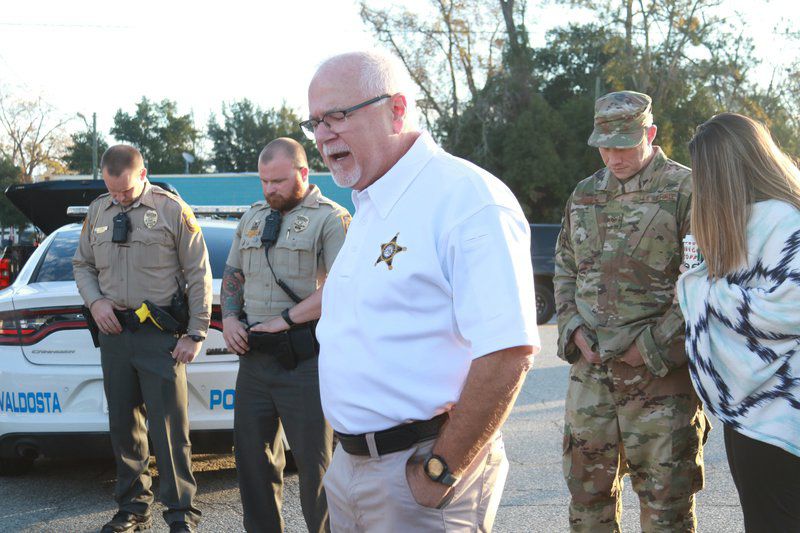 Amanda M. Usher | The Valdosta Daily TimesA veterans memorial quilt hangs in the hospice wing of the Lake City VA Medical Center in Lake City, Fla., and displays the names of veterans who died while in hospice at the center.

The Air Force veteran said he was spat on and was not embraced at work.

Hurricane Michael destroyed his home in 2018, he said, noting a tornado went through his front yard.

“They found me laying on my front lawn, my dog sitting on my chest,” Heller said. “... Most of my house was gone.”

He now spends his time in the Lake City Veterans Affairs Medical Center, a veterans facility that houses 135 residents including those in its two substance-abuse programs.

Earlier in the month, the center received a visit.

Police officials from the Lowndes County area traveled about 77 miles with community volunteers to donate items to the hospital’s inpatient veterans during the Hahira Mayor's Motorcade just as they’ve done for the past several years.

Alongside the Hahira Police Department were officers from Valdosta and Valdosta State University police departments and deputies from the Lowndes County Sheriff’s Office.

“It makes me feel really good that they take the time to do that,” Heller said of the visit. “It makes a big difference.”

The motorcade is a redirection from its earlier years when it would benefit a Thomasville medical facility during Christmastime, said Coombs, who mentioned he was instrumental in getting it rerouted after being approached about the matter.

Heller shared stories with the police officers who traveled more than one hour to extend their time to him and the other residents.

“It gives you a good feeling. People care,” he said. “It gets a little lonely in the hospital.”

On the day of the motorcade, Heller was not alone.

Civilian cars quickly maneuvered to the roadside as a caravan of sirens and blue lights rode up Hahira’s Main Street and hit Interstate 75; the patrol cars headed south.

The line cruised down the interstate making its way to the veterans hospital.

The leader of the pack carried Hahira Mayor Bruce Cain as he sat in the passenger’s seat of the police chief’s vehicle, which was driven by Hahira Police Cpl. Todd Pitchford.

The trip marked Cain’s seventh year with the motorcade. His involvement began as a member of the Hahira City Council in 2012.

In all of his time participating, Cain said he’s only missed one trip.

“It’s really the feeling that you get helping someone knowing that they’ve given everything they could in serving our country, and it just makes you feel really good to be able to give back to help them,” he said.

He said the motorcade has seen tremendous growth.

Though there has been an increase in the amount of community presence during the actual ride to Florida, Cain said there has always been support in collecting donations.

The City of Hahira establishes drop-off locations around town allowing residents to leave requested items for the veterans.

According to center staff, 133 volunteers from the South Georgia and North Florida regions provided $175,000 in funding to the facility in 2018.

Through the motorcade alone, the Hahira community raised $15,000 in donations for the hospital, staff said.

Hahira Main Street Director Emily Davenport sat in the backseat of the same car as Cain. She agrees the City of Hahira cares for its own but she adds the community helps people who aren't from the area, too.

“What I’ve seen in the past year, it is such a giving community,,” she said. “... We have a large group of veterans in our own community. You often find they just want to give back to other veterans. … We work really well together and it’s something that we look forward to.”

Pitchford said most of the volunteers traveling in the caravan were helping off duty, during their free time.

“It feels good to know that your brothers in blue are supporting you,” he said. “You always see the rivalries, the inter-agency rivalries, but when it comes down to it, we’re all the same and we’re all working toward the same goal and that’s what we’re pursuing here.”

During the motorcade, the common goal was to bring Christmas cheer to military veterans.

From One Brother to Another

New clothing, shaving items, combs, toothbrushes, toothpaste, shampoos and other contributions were given to the veterans.

“We try to use a little imagination with it because a lot of times we might forget what a person really needs,” McPherson said. “The City of Hahira, the entire community, supports this effort so much.”

The post partnered with the Hahira Historical Society, according to organizers.

Fulfilling its usual act of kindness, the legion contributed a $500 monetary donation for the Lake City VA Medical Center.

Though some of the vets are from the South Georgia region, not all of the hospital’s residents have family members in the area, McPherson said.

Adams confirmed some of the veterans do not have families.

“It’s nice for other groups to come in and celebrate with them along with the staff,” he said.

McPherson’s group of volunteers allows the veterans to be recognized, McPherson said.

“It’s just a heartfelt situation that comes up when you see this; the community coming together with the veterans and it’s just a good feeling,” he said.

Vietnam vet Ronald Fisher spent six years in the Navy and has been utilizing the services of the medical center in Lake City for 33 years.

When the South Georgia volunteers arrived, he said he bonds with them.

The sentiment mimics the thoughts of McPherson.

“Being military, we are a family, and to go in and spend time with them, we’re brothers in arms,” McPherson said.

Some vets become first-responders serving as police officers or firemen, Pitchford said. They have a “heart of service,” he said.

“Any time we can reach out to help, we do,” he said referring to his fellow police officers.

Just as before, with lights flashing and sirens sounding off, the caravan veered off of the interstate exit and rolled down South Marion Avenue with escorts from the Lake City Police Department.

The Rev. Mike Davis of the Lowndes County Sheriff’s Office sped ahead of the pack to help clear the way.

Members of the Naval Submarine Base Kings Bay and the Union County High U.S. Army JROTC cadets stood in front of the veterans hospital awaiting the group’s arrival, which only took minutes from the exit.

Cain presented the center with two donated checks from the City of Hahira and members of the Hahira Honeybee Committee.

During his speech, he said Post 218 members were “the brains” behind the mayor's motorcade.

“A few years ago, they were the ones that wanted to start coming down to the VA and doing something for the hospital,” he said in his speech. “It was a privilege and honor to do it, to work with them.”

The ceremony continued with a remembrance of the Pearl Harbor attack. More than 2,400 Americans died and 1,000 people were wounded during the attack. The motorcade arrived a day before the anniversary of the Dec. 7, 1941 attack.

Davenport was moved by the remembrance of Pearl Harbor and the sacrifice of the American military throughout history and now.

Then, the South Georgia visitors unloaded the donations, filling the medical center’s auditorium floor. They carried soaps, blankets, plants, deodorants and more into the building.

Noticeably, every hall or room in the hospital has its own unique name: the Stars and Stripes Cafe, Patriot Place, the Heroes Cafe, Bravery Boulevard, Victory Lane and Glory Place to name a few.

There are recreational rooms, a community living center, an in-house barbershop and an outside gardening space.

Volunteers migrated from floor to floor, spending quality time with the veterans and hearing their stories.

They took their time, interacted with them, laughed with them and learned from them.

Staff Sgt. James Mondy of Moody AFB and his wife, Chelsey Mondy, were first-time participants in the Hahira Mayor's Motorcade.

“It’s a good program. I like it,” James Mondy said. “It’s nice to be able to connect with people that started what I’m continuing.”

“It’s nice to be able to come down and get to interact with them and let them know they still matter,” Chelsey Mondy said.

A group spent quite a bit of time in one room that belonged to hospice resident Philip Newman, a four-year veteran of the Naval Air Force who retired as an aerographer.

His usual Christmas plans include being with all of his children, but this year, Newman will celebrate Christmas at the hospital.

One of his daughters, Cathy Price, expressed gratitude for the South Georgia volunteers.

“I just think it’s wonderful that all (these) people are coming to visit the veterans because it does mean a lot so we greatly appreciate it,” she said.

Newman said the time he had with the others was wonderful.

He responded to questions the servicemen had for him and he gave them advice.

“Anybody that comes to see me is good,” he said. “As long as they let me talk about Jesus Christ, it’s good.”

Upon leaving the hospital, everyone congregated at Ken's Bar-B-Que, a local eatery in Lake City.

Following barbecued ribs and lengthy chatter, everyone headed back up I-75 reflecting on the day's journey with no sirens and no blue lights; just full bellies and warm hearts.