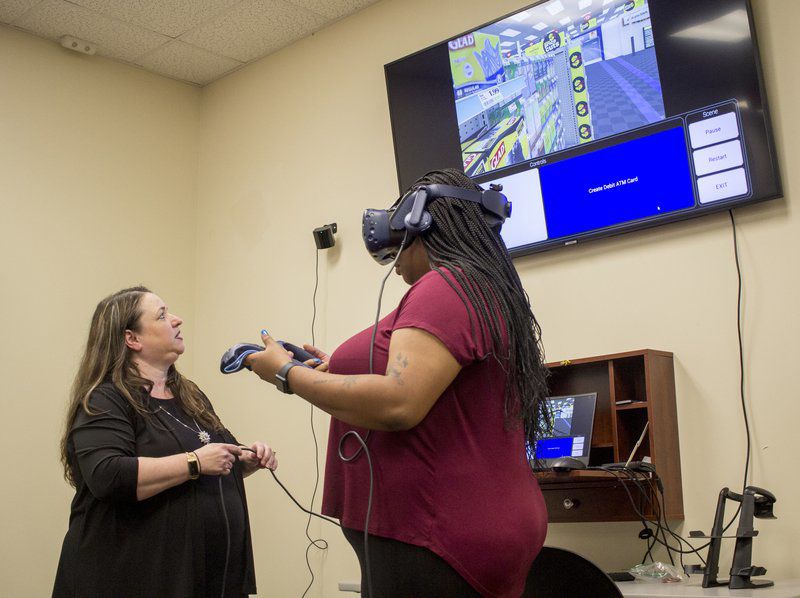 Sarah Warrender | The Valdosta Daily TimesDr. Bobbie Ticknor runs through a simulation provided by NSENA with Navella Holloway to show how virtual-reality technology helps teach inmates how to grocery shop once they are released from prison. Another simulation available teaches how to do laundry. 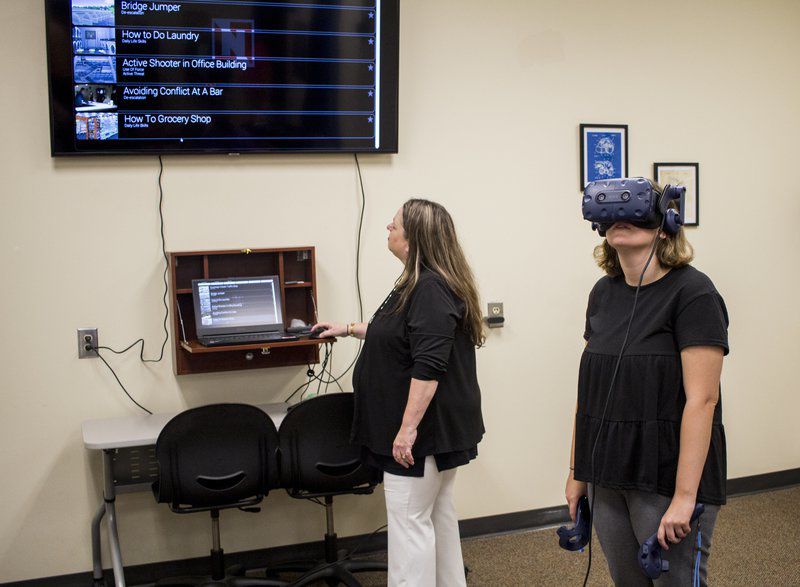 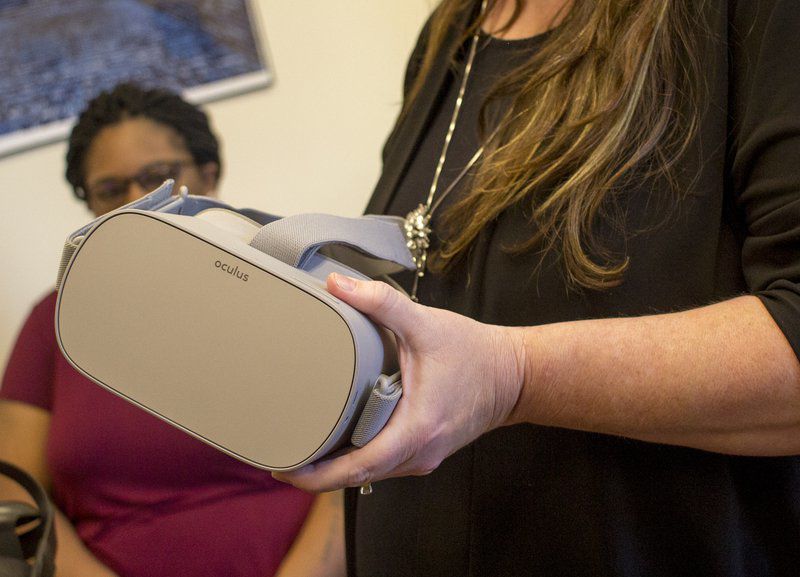 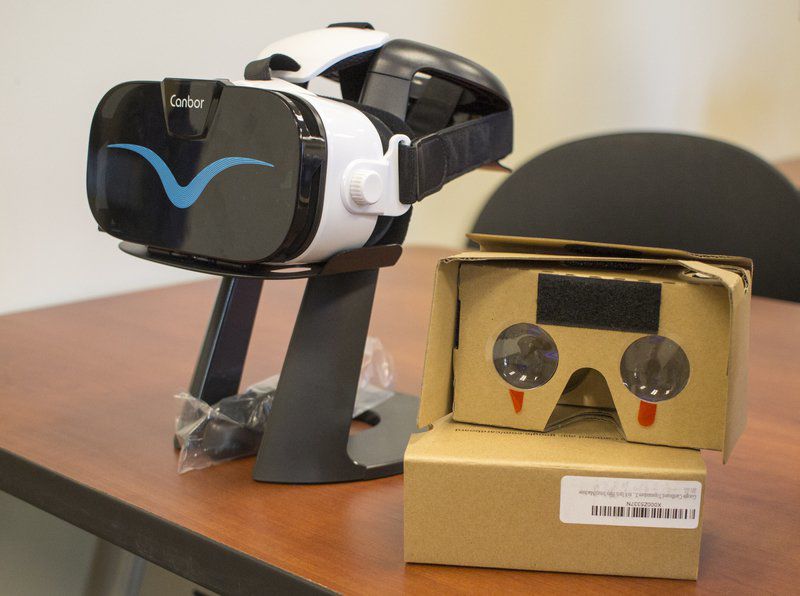 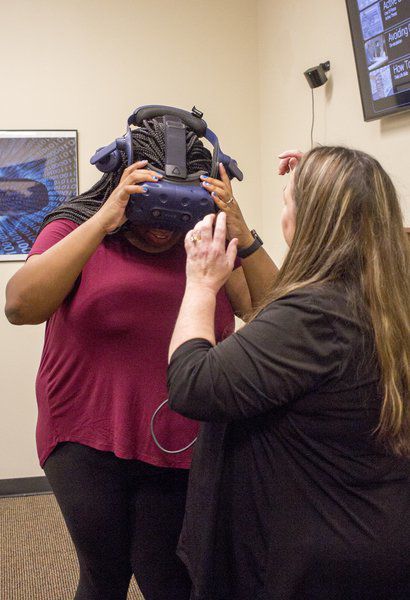 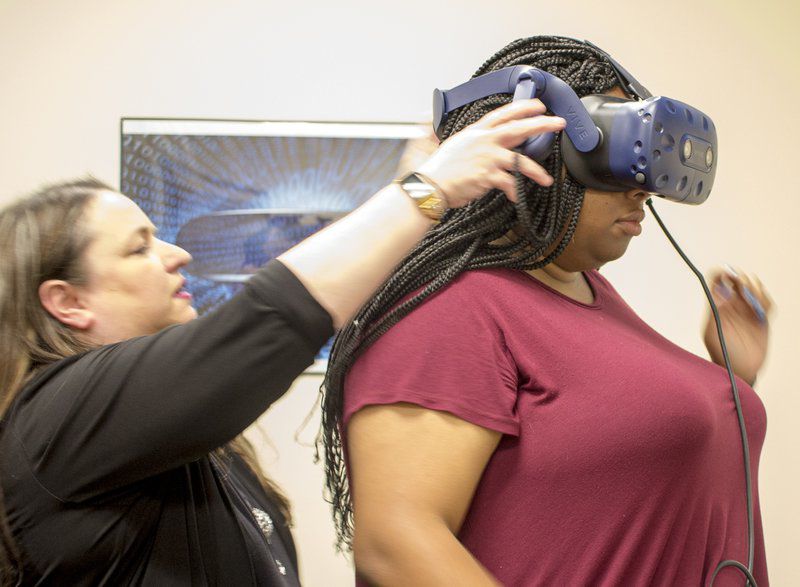 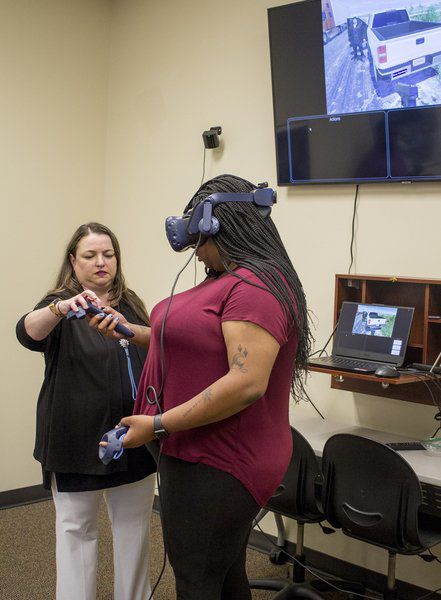 VALDOSTA — It’s no secret the best way to teach a student is putting them in real-life scenarios.

Virtual reality has moved into the Valdosta State University Odum Library and has already been used during summer semester in the criminal justice program.

“Just think if you were a criminal justice student, and you could see a crime scene before you’ve actually gone out and had to experience it in real life,” Ticknor said. “We can offer experiential learning opportunities here in the classroom where it’s safe and controlled, but our students get that valuable experience just like if they were out in the field.”

A total of 15 VR headsets, differing in levels of advancement, sit in the classroom on the second floor of the library.

Some of the prompts are as simple as shopping at a grocery store or doing laundry at a laundromat or as specific as an active shooter situation.

Navella Holloway, a third-year criminal justice student, was in the first group of students to try out the class during the summer semester.

The future forensic psychologist said VR was a great educational tool for her, and she could see it being useful for all majors.

“Using the headsets, you can immerse yourself into a crime scene,” Holloway said. “Especially when you use headphones with it, it really feels like you’re there. It’s really in front of your face. You can know what to look for while you’re in an interrogation at an actual crime scene.”

Ticknor has plans to expand the VR lab to anyone on campus who wants to use it.

For example, the history department plans to use it to show its students how the Declaration of Independence was signed.

“I’ve opened this up to all faculty and staff around the entire campus,” Ticknor said. “Next week, I have interior design coming where we’ll have their students go through a virtual simulation. I have history coming, chemistry, biology, even the career opportunities office.”

Ticknor said it was a joint effort in bringing VR to VSU, including the library, IT, other campus resources and NSENA out of New York City that provided the simulation footage viewed in the VR headsets.

“Through my technical skills and abilities and a lot of support from the library here at VSU and from IT and other resources, we got together,” Ticknor said. “I designed the lab and got some funding for it, and it’s been great.”