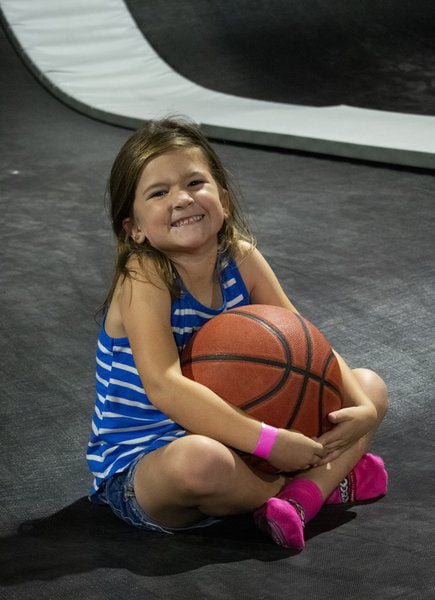 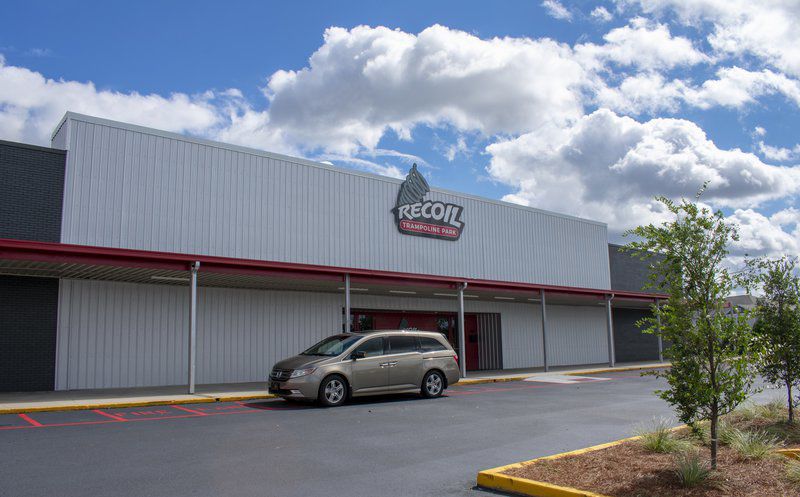 Dalton Spangler | The Valdosta Daily TimesRecoil, a new trampoline park in Five Points, is now open and offers various activities for the community. 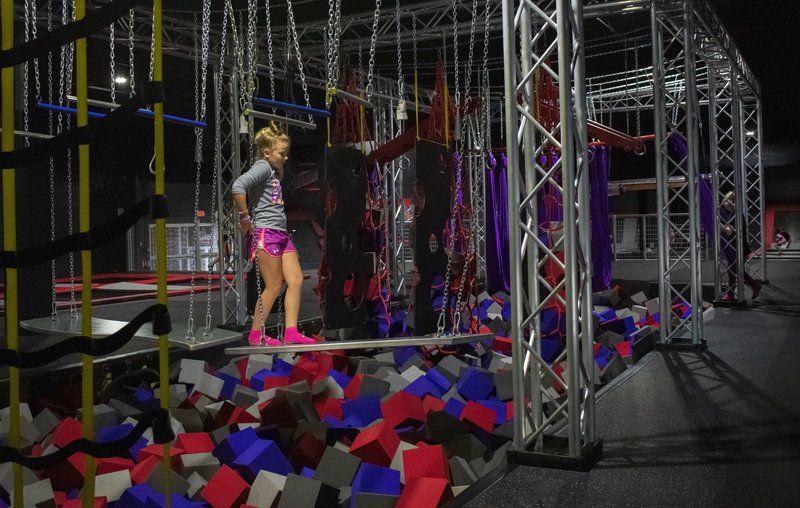 Dalton Spangler | The Valdosta Daily TimesGabbi Stevenson, 10, celebrates her birthday at Recoil in Five Points as she crosses a hanging bridge in the ninja course. 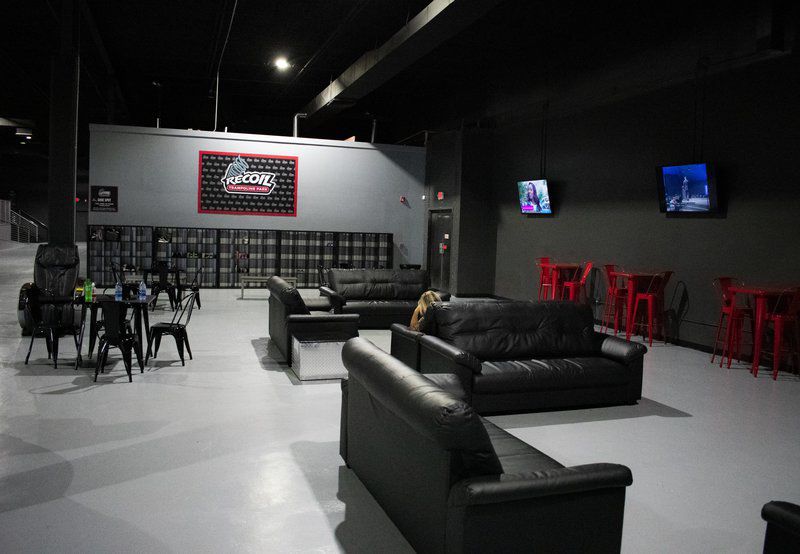 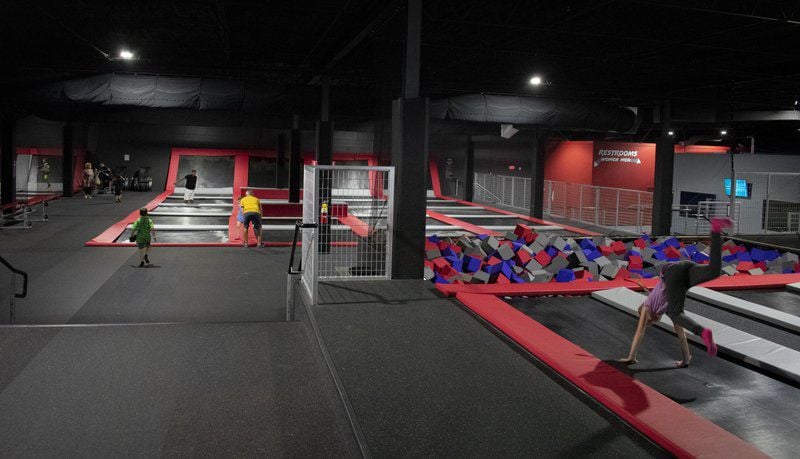 Dalton Spangler | The Valdosta Daily TimesRecoil, a new trampoline park, has a tramp to pit area and a large court that can be used for flipping and jumping. 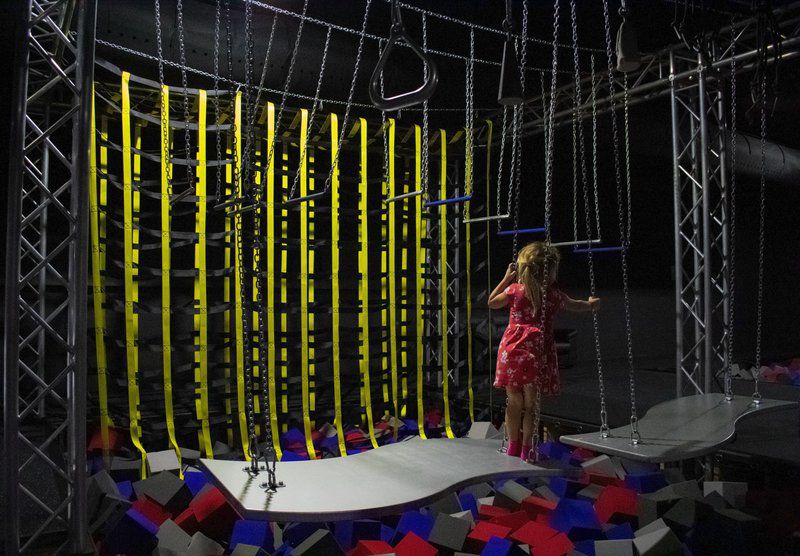 Dalton Spangler | The Valdosta Daily TimesSavannah Price, 3, crosses over the hanging bridges in the ninja course at Recoil. 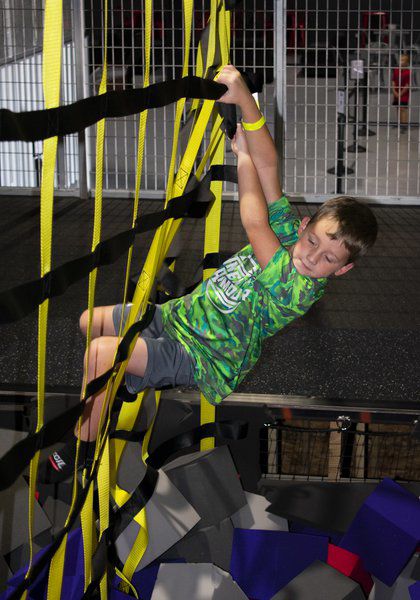 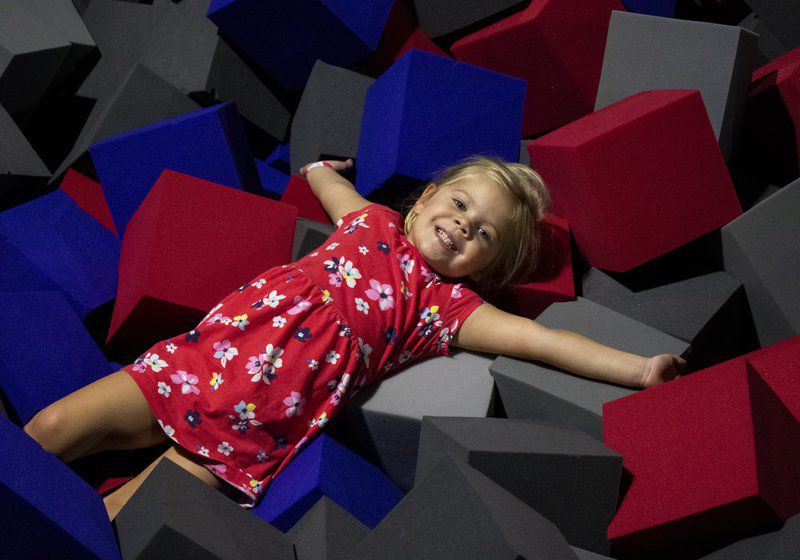 Dalton Spangler | The Valdosta Daily TimesSavannah Price, 3,  lands after swinging on a trapeze at Recoil. 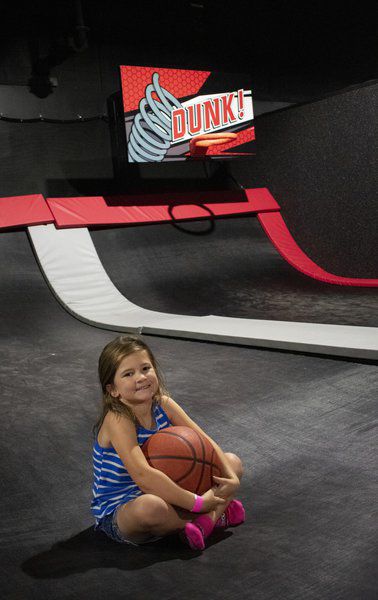 Dalton Spangler | The Valdosta Daily TimesRecoil, a new trampoline park in Five Points, is now open and offers various activities for the community.

Dalton Spangler | The Valdosta Daily TimesGabbi Stevenson, 10, celebrates her birthday at Recoil in Five Points as she crosses a hanging bridge in the ninja course.

Dalton Spangler | The Valdosta Daily TimesRecoil, a new trampoline park, has a tramp to pit area and a large court that can be used for flipping and jumping.

Dalton Spangler | The Valdosta Daily TimesSavannah Price, 3, crosses over the hanging bridges in the ninja course at Recoil.

Dalton Spangler | The Valdosta Daily TimesSavannah Price, 3,  lands after swinging on a trapeze at Recoil.

VALDOSTA – They leapt, they jumped and they swung high up to the sky – well, not exactly the sky, but the little visitors at Recoil did catch some air recently.

Kids of all ages ran across the blacktop and took advantage of the 30,000-square-foot trampoline park bouncing off of walls, partaking in games of dodge ball and even trying their hand at basketball.

A few parents hit the trampolines, as well, jumping into foam pits with their little ones.

The pits – which consist of blue, red and grey foam squares – are three-feet deep and rest over trampolines, said Trent Coggins, owner.

Two years in the making, Recoil opened its doors Sept. 20 in the Five Points Shopping Center. Construction began in February.

“Five Points has been better than we ever expected. The City of Valdosta (who owns the property) has been a wonderful partner,” Coggins said.

“We cannot be more excited to put the spring back into Five Points. This has really been the perfect location. It is right in the heart of the community.”

He owns the facility with his wife, Anna.

Since opening, Recoil has consistently been busy, Coggins said.

“It’s been crazy. It’s jam-packed,” he said. “We’ve had good turn out both in the middle of the week, and then, also on the weekends, as well.”

The father of four sons, Coggins said they would have to travel to other areas if they wished to visit trampoline parks. He visited his first park in 2017 in Tallahassee, Fla.

He would sit and watch his sons jump, which sparked a thought.

“I sat and watched how much fun it was and I said Valdosta needs something like this,” he said.

He visited 14 parks nationally during his research in various areas. Though it took longer than anticipated, Coggins said it was worth it.

“I’m very proud of what we’ve accomplished here,” he said. “The response from the community has been overwhelming and made all the long nights worthwhile.”

He calls Recoil an asset to Valdosta-Lowndes County and said he received pushback from large franchises when he first thought of opening the park.

“They told me that Valdosta was not large enough to attract their attention. Most trampoline parks are located in larger cities, but I continued doing research and found that there are, in fact, several trampoline parks throughout the U.S. located in smaller cities similar to Valdosta and they are doing tremendously well,” he said.

“Without Recoil, it would have probably been many years down the road before Valdosta landed on the franchises' radar.”

When guests enter Recoil, they’re faced with a selfie station and waiver screens.

Parents or legal guardians must sign waivers for children younger than 18 years old. Waivers are good for a year and can be signed online, as well.

Guests then must head to the main counter to the right of the entryway for payment and sock-retrieval.

A parent pass offers half-price to anyone paying for child. Parents not jumping are not required to pay an entry fee.

While paying, people get color wristbands that will aid with crowd control. While playing, an announcer will call out their color to alert them their play time has been completed.

Recoil has special socks with non-grip bottoms. Coggins said the socks increase stability and “look cool, too.” They can be reused during future visits after being purchased for $3.

Once the process is completed, trampolines await guests on two separate levels.

On the bottom floor is a large open court for people to bounce off of trampoline walls and flip.

Next to it is a court for good old-fashioned dodge ball games completely set with trampolines.

To the right of dodgeball is a basketball court offering three different height levels for a variety of ages.

A small staircase leads to the top floor where a ninja course features eight activities.

Kids can climb and use the features to cross to the other side. The ninja course suspends over a large foam pit.

Surprisingly, Coggins said the swinging trapeze has become a popular item. Kids line up to take turns swinging on a trapeze into a pit; some do flips and some simply grab and fall.

There are future plans to make additions to Puddle Jumpers, an age-restricted foam zone with a wall climb across and mini trampolines. Coggins said a swing or slide may be added.

Closing out the top floor is what Coggins calls a tramp to pit area for visitors to jump or flip into a pit.

Concessions are not offered, but vending machines next to the payment counter offer drinks and snacks. Also in this area are locker stations for personal belongings and phone chargers.

Coggins confirmed additional elements will come in the future as Recoil grows.

“Right now, we have a few additions in mind to add to what we already have in place,” he said. “But we have plenty of room to expand when we are ready to start knocking out walls.”

Recoil is concerned with safety and cleanliness, Coggins said. Evaluation is regularly done on the facility for upgrades based on customer feedback.