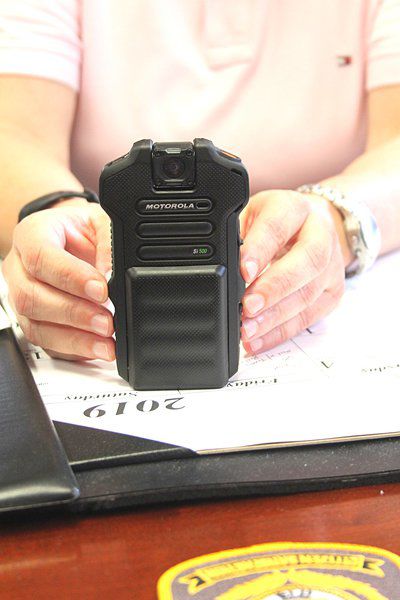 Terry Richards | The Valdosta Daily TimesValdosta Police Chief Leslie Manahan holds one of the department's body cameras, which cost from $800-$1,000 each. 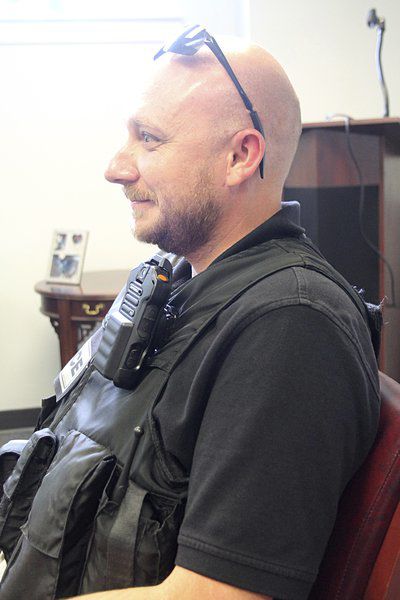 Lifting the Veil: The Story Behind the Story / Body cameras

VALDOSTA — The bloody shooting victim is curled up on the ground in one corner of the image. The disembodied voice of a police officer is talking to him.

"Who shot you?" asks the officer. "Tell me something real quick — now I need to know. What did the guy look like? What was his name?"

The bloodied man rolls over slightly, with four bullets in him.

"Junior? All right, does he have short hair or long hair? Long dreads?"

The gunshot victim rolls out of view. "Dreads," he groans.

The officer continues. "Dreads, OK. All right, man; sit tight, man. Do you know where he lives at? Does he work with you?"

On the ground, the bloody man snorts "Yes."

At this point, hands in blue surgical gloves can be seen reaching out for the man on the ground — emergency medical technicians.

Back to the officer: "You're the boss? And he works for you? OK, where do you pick him up at?"

One of the EMTs says, "Hold still, bro. Hold still."

The victim whispers, "My friend knows him."

As the EMTs work, the officer asks, "Your friend knows him? Your friend that called the ambulance knows who he is? He knows where we can pick him up at?"

The man with the gunshots grunts "Yes," and an EMT tells him, "Relax, bro. Nice, easy breathing."

These words helped convict Amos Haynes Jr. from beyond the grave.

The gunshot victim, Xavier Jones, died Sept. 17, 2014, after having been shot on Ray Lane Sept. 10. The description of his killer that he gave to an officer wearing a body camera was an important piece of evidence at Haynes' trial, Southern District Attorney Brad Shealy said.

"(Body cameras) are a great tool for law enforcement," he said.

“It’s a great tool in getting the truth out there … There’s no way anybody can lie about a film,” he said.

How body cams are used

County drug officers started using body cams in 1998, while cameras were in use by all road personnel by 2010, Paulk said.

Shealy said the use of body cameras can actually cut down on the number of trials, particularly in domestic disputes where it can prevent "he said/she said" situations.

"Sometimes a witness will tell a police officer something, then later try to deny saying it, but the video proves otherwise," he said.

Paulk said the Lowndes County Sheriff’s Office has about 90 body cams, issued to officers in road patrol and drug operations.

“Really, to anybody who’s on the road,” he said.

Valdosta Police Chief Leslie Manahan said the police department has more than 150 cameras, and they are issued to all sworn personnel.

While early models had video files that had to transferred on camera cards, newer body cams automatically save files to “the cloud,” Paulk said.

The current cost of running the “cloud” body cams is about $150,000 a year, which is cheaper than operating the old “camera card” cameras, Paulk said. The sheriff’s office has a five-year contract with the manufacturer, which covers all upgrades, he said.

The Valdosta Police Department has had to quadruple its server space because videos have to be kept for up to seven years.

“It’s one of our biggest expenses,” Manahan said.

The chief said she would like to see an improved battery life for the body cams. Right now officers sometimes have to swap out batteries during a shift.

Manahan said cameras are used during any interaction with residents, except for undercover officers who aren't required to use them.

Violations of camera policy can be punished with disciplinary actions depending on the situation, Manahan said. She said the department has had to deal with officers not having their cameras on in the past.

Any interaction with the public has to be recorded, Paulk said. The penalties for failing to do so are a reprimand for the first offense, a week off without pay for a second.

The current body cams are designed to automatically activate whenever a deputy takes an action such as drawing a firearm, he said.

Manahan said a member of the public being filmed by police can request the camera be shut off, “but it stays on in heated situations.”

She said in cases that are closed, footage is available to the public through an open records request.

No one at the department has the ability to manipulate the footage, Manahan said.

“In a criminal investigation, the cameras are locked down; the officers couldn’t look at (the video),” she said.